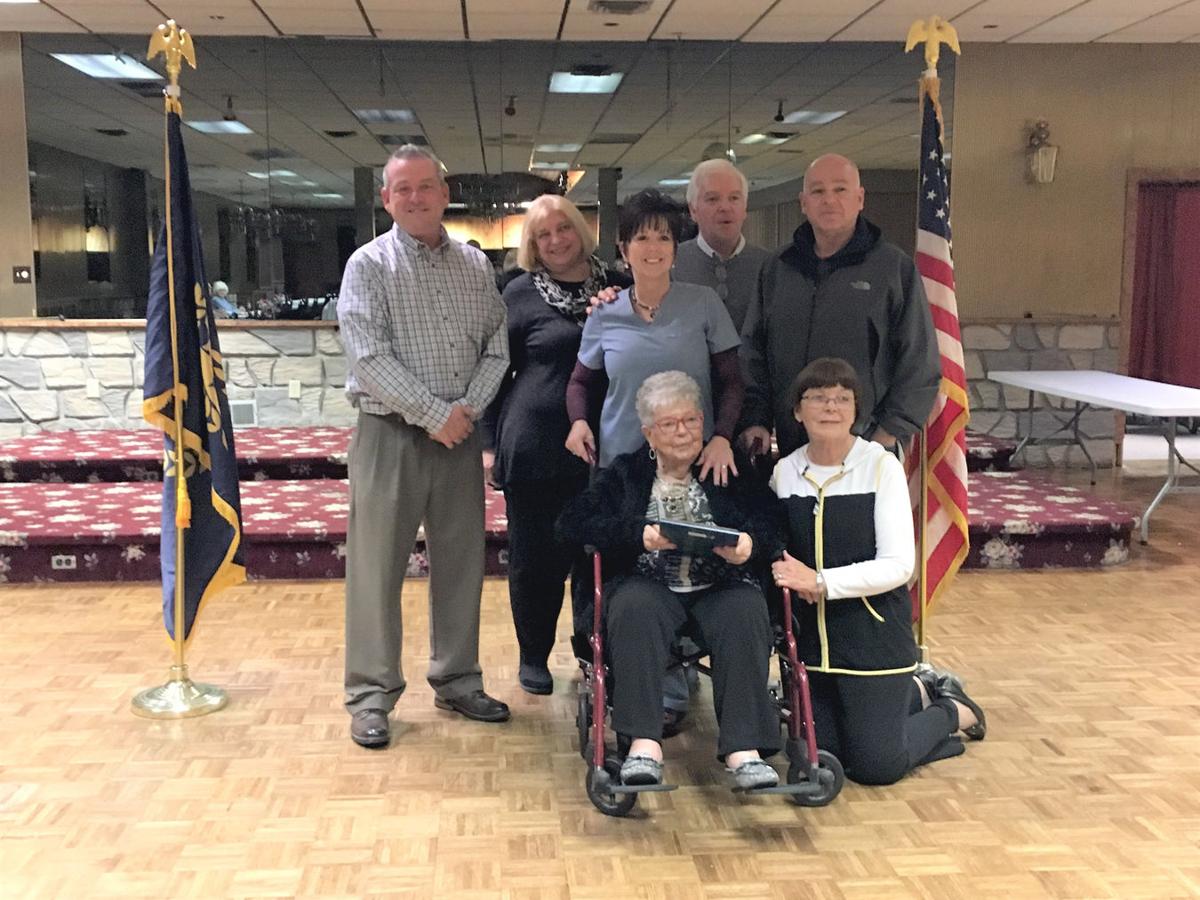 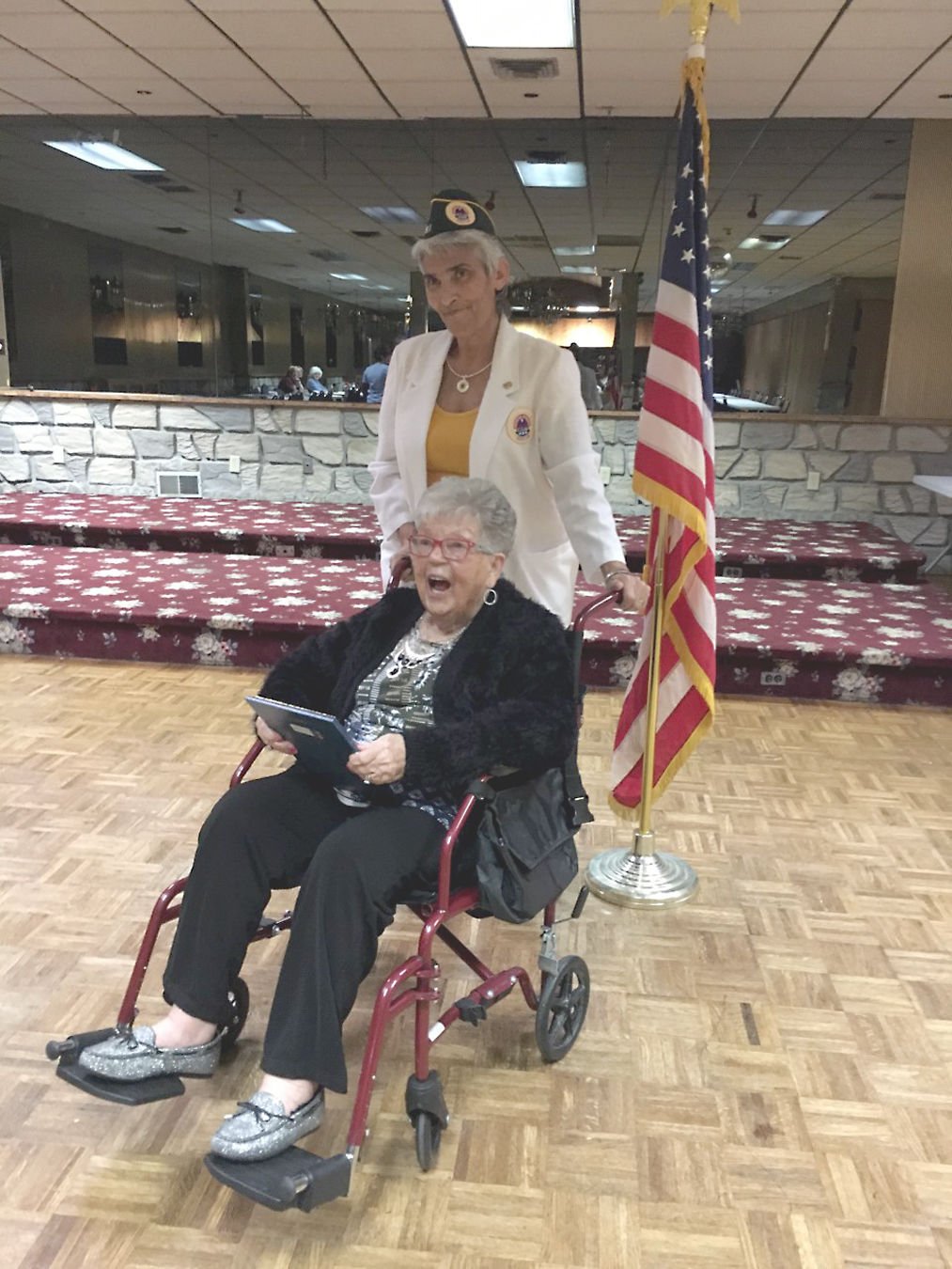 George Marshall AMVETS Post 103 Ladies Auxiliary honored Korean War veteran Dolores Onesko, of Penncraft, with a plaque just in time for Veterans Day. Brenda Moats, of Georges Township, auxiliary president, presented Onesko, seated, with a plaque during a ceremony at the AMVETS home in Hopwood, noting “We would like to thank you for your service.’’ 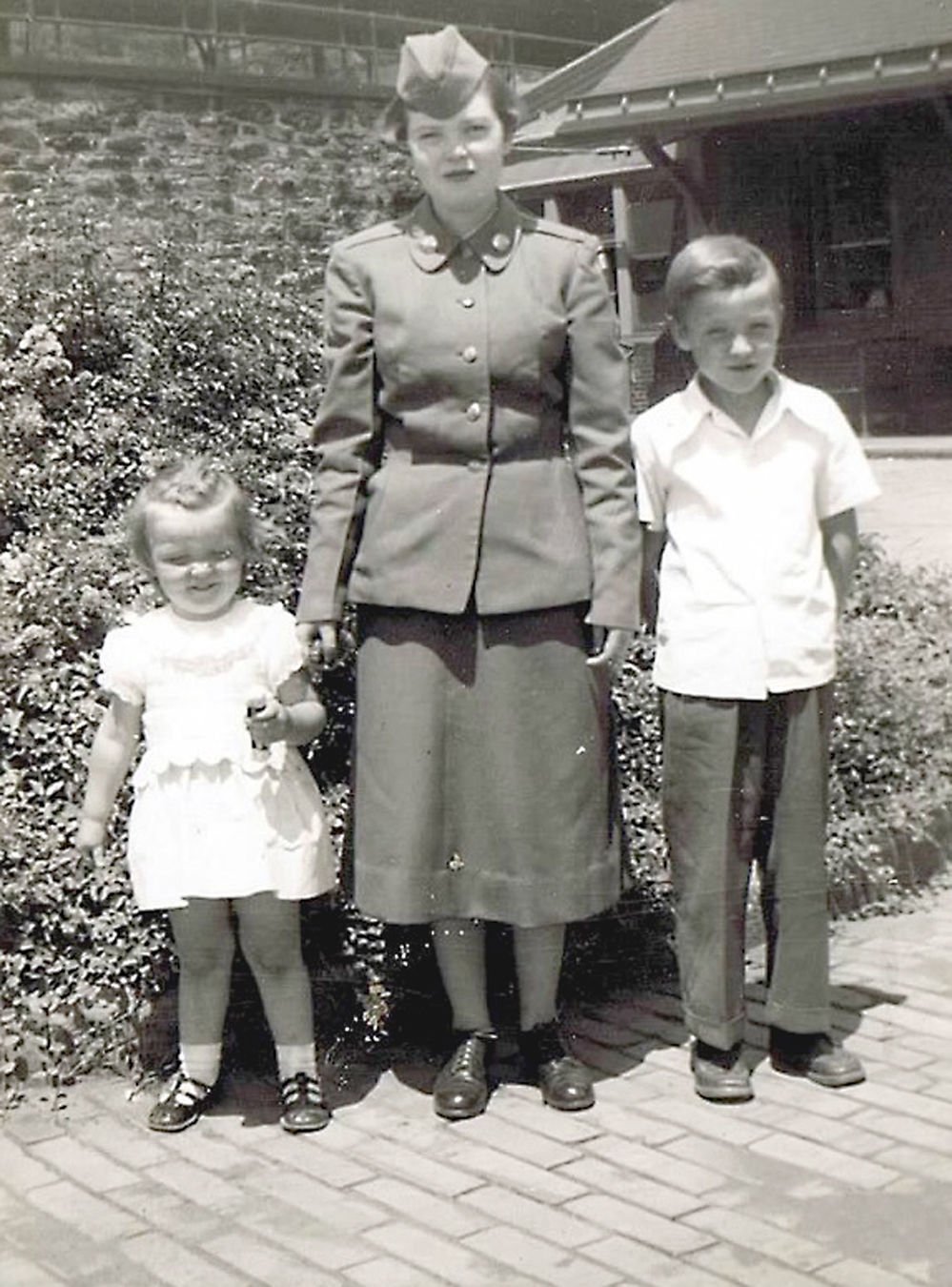 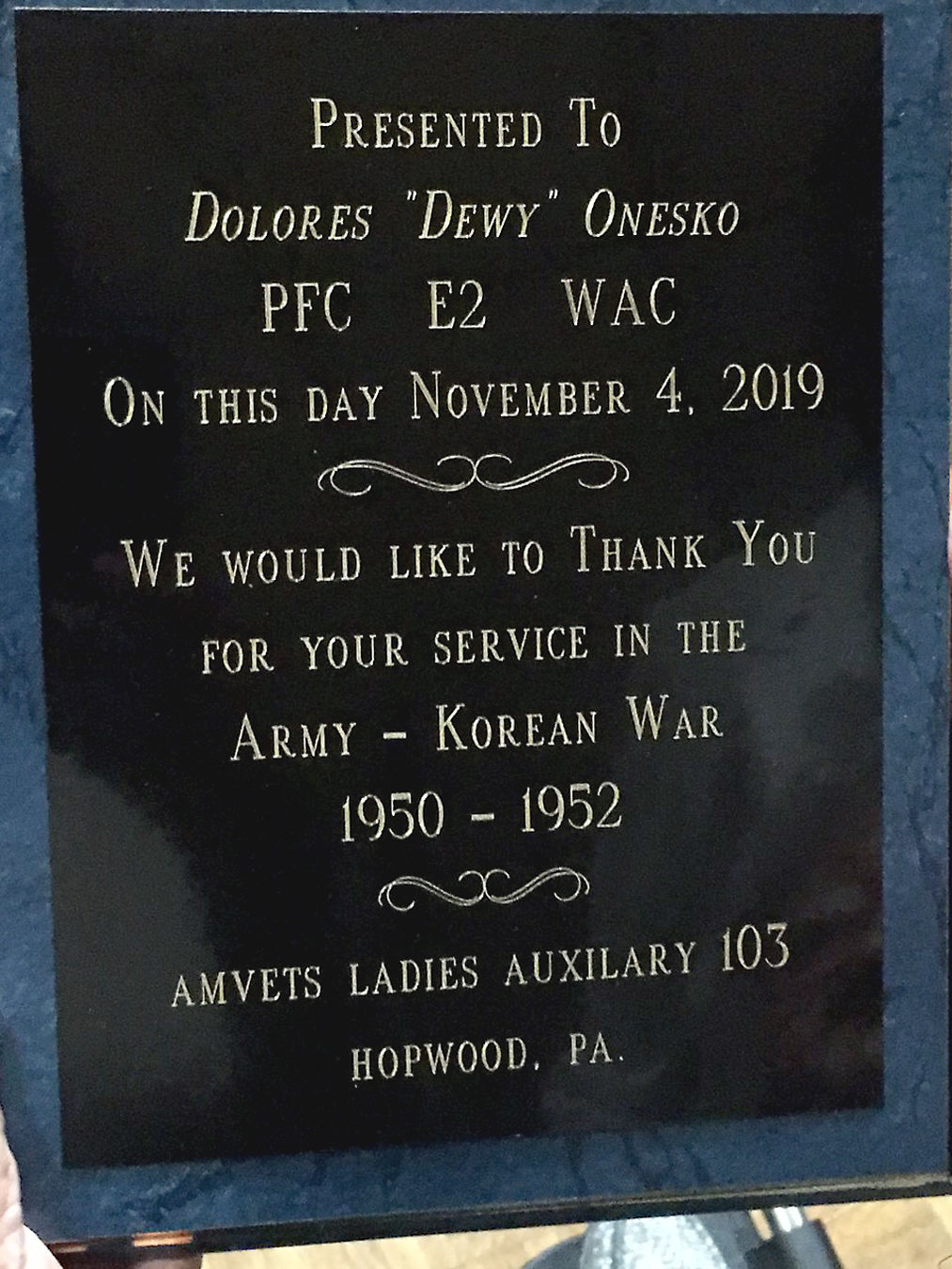 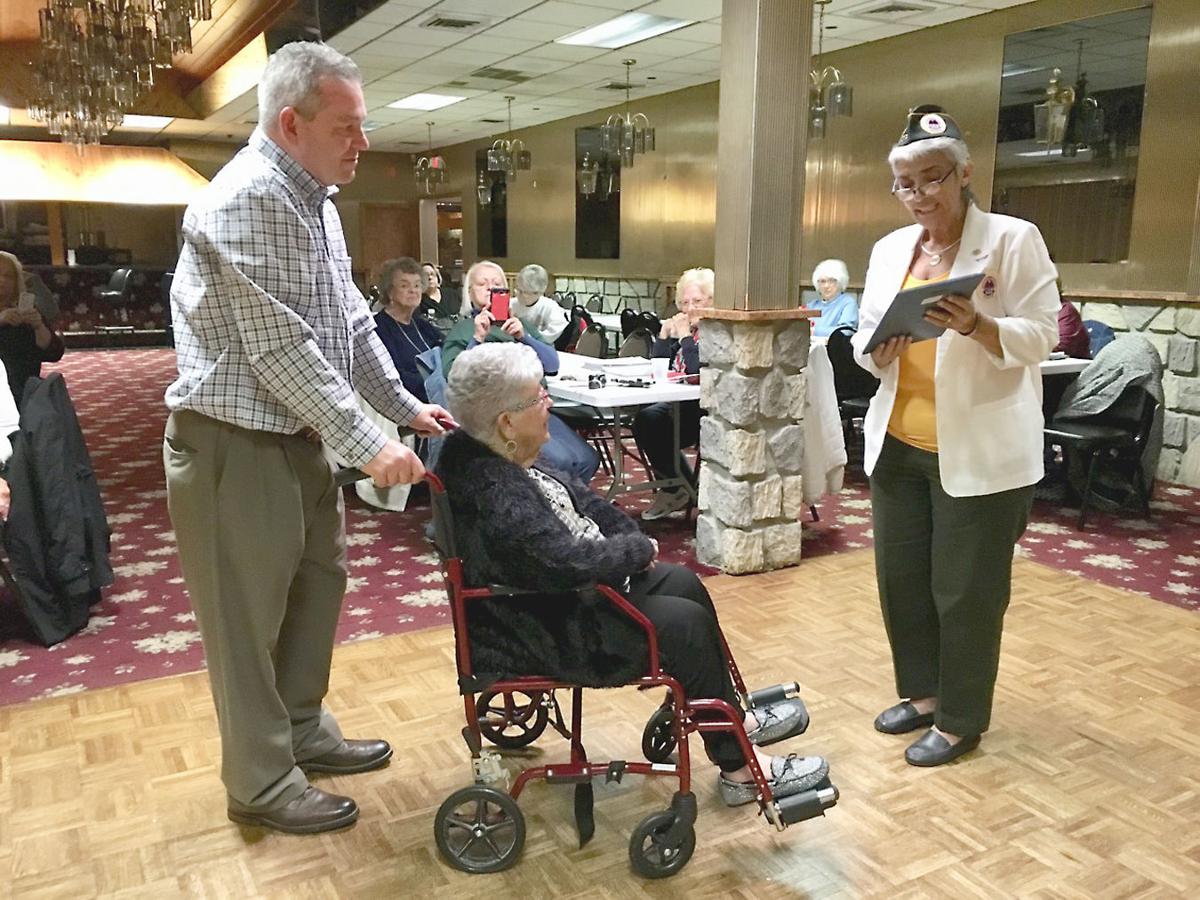 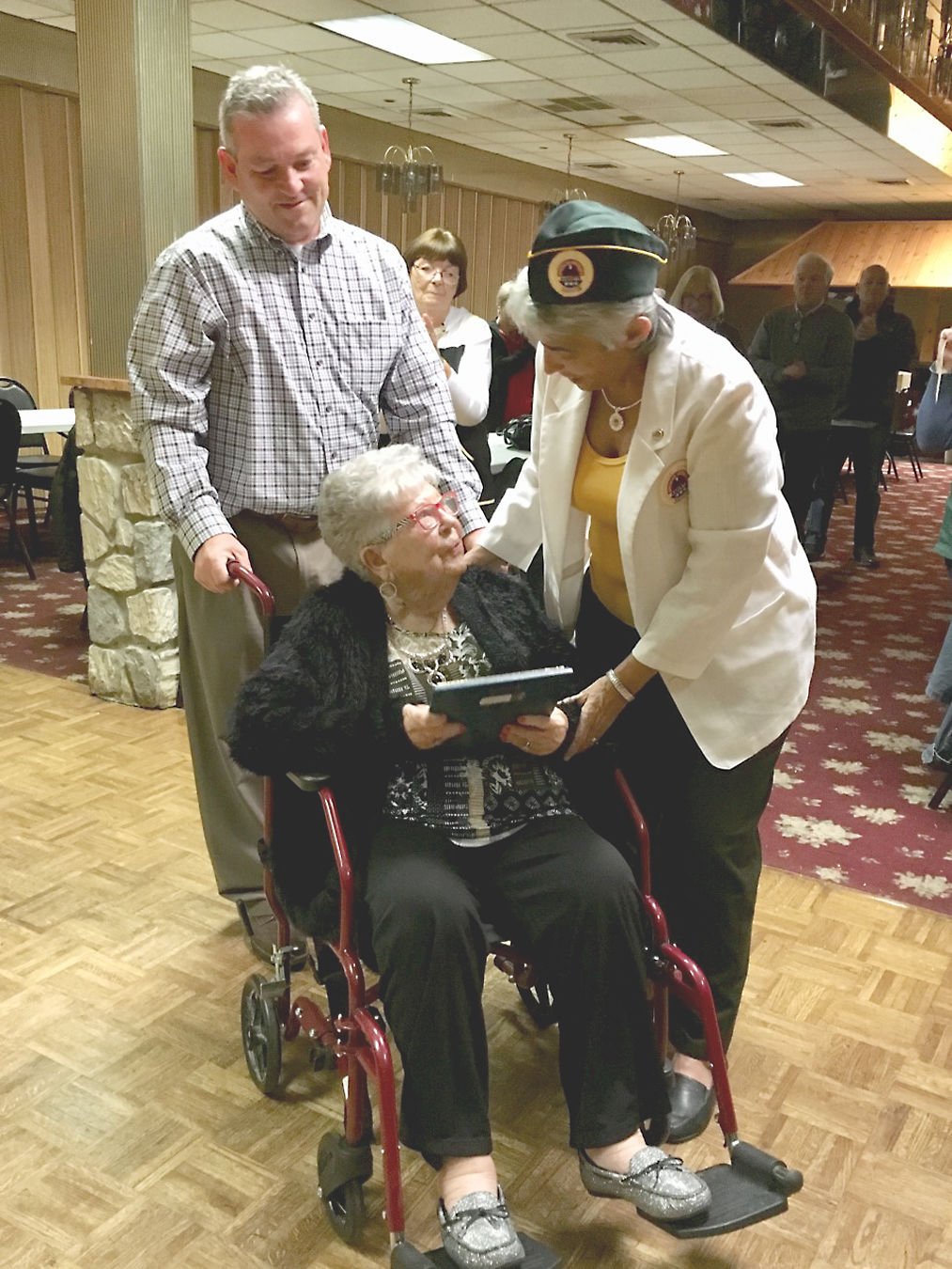 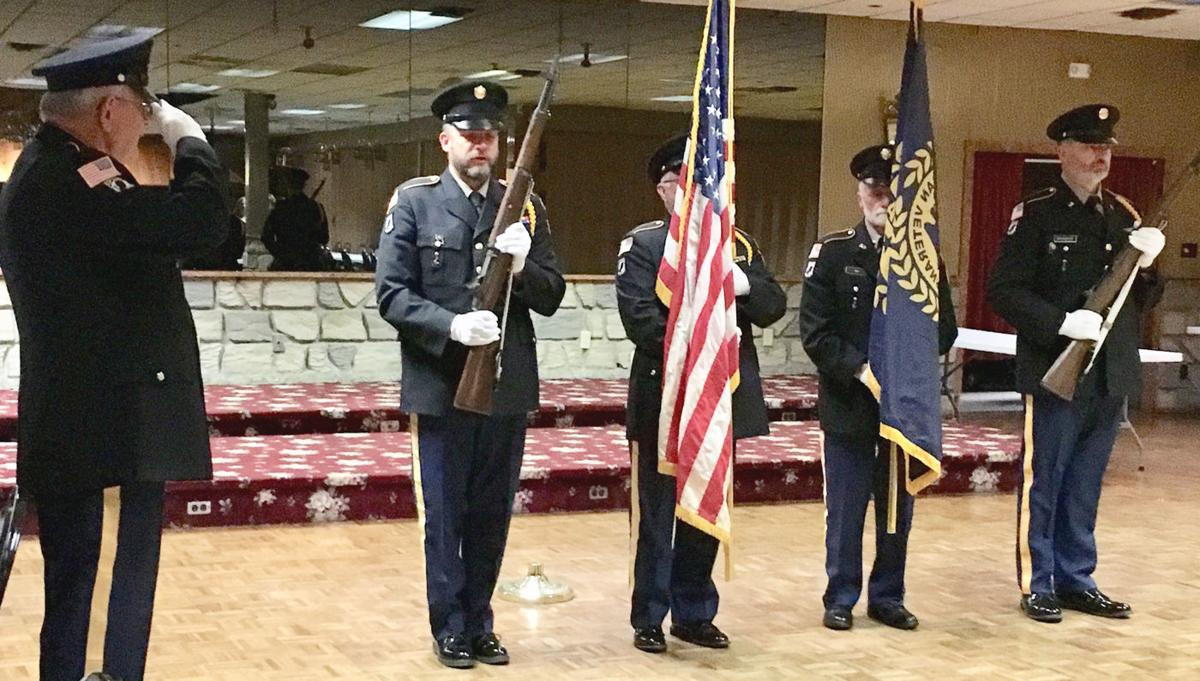 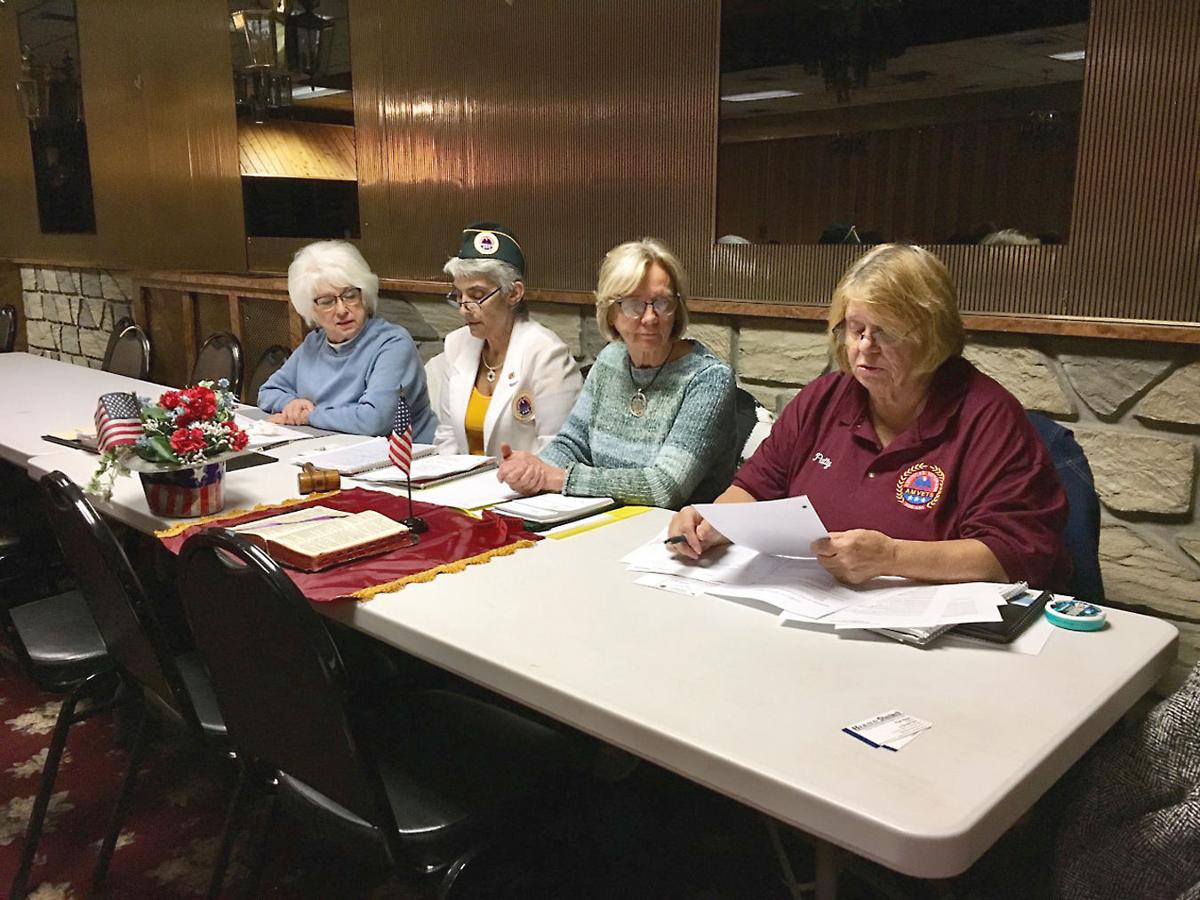 George Marshall AMVETS Post 103 Ladies Auxiliary honored Korean War veteran Dolores Onesko, of Penncraft, with a plaque just in time for Veterans Day. Brenda Moats, of Georges Township, auxiliary president, presented Onesko, seated, with a plaque during a ceremony at the AMVETS home in Hopwood, noting “We would like to thank you for your service.’’

Dolores Gadd Onesko joined the Army in 1950, just after her graduation from German Township High School and at the start of the Korean War.

“I’m very proud of it,’’ Onesko, 88, a native of Ralph, German Township who now lives in Penncraft, Luzerne Township, said of her service.

So are members of George Marshall AMVETS Post 103 Ladies Auxiliary, who honored Onesko with a plaque just in time for Veterans Day.

“With great pleasure, we decided to do something for this young lady,’’ smiled Brenda Moats, of Georges Township, auxiliary president, during the Nov. 4 ceremony at the Hopwood post.

Moats shared Onesko’s military record and life after the war, then called her up and read the words on the plaque, echoing their sentiment, “We would like to thank you for your service.’’

“I want to thank everybody for this beautiful plaque and for honoring me,’’ Onesko said. “The Korean War is the forgotten war. I’m glad somebody remembers.’’

The Army News Service reported during a 60th anniversary observance, “When President Harry S. Truman ordered U.S. forces into Korea in 1950, the entire complement of women in the armed services numbered just 22,000, of which nearly 7,000 served in the health care professions. The remainder held line assignments throughout the service branches.’’

Today, more than 2 million men and women serve in the military - about 16 percent of them women.

Onesko entered the Army with her future husband, George Robert Onesko Sr., who lived three houses down from her in Ralph.

“They grew up together,’’ said her son Michael Onesko, with whom she makes her home. “He went to the Army and then she signed up.’’

The couple didn’t serve together. George was sent to Fort Campbell, Kentucky, and trained as a paratrooper while Dolores was sent to basic training in Petersburg, Virginia where she became part of a Hollywood movie called “Never Wave at a WAC’’ that starred Rosalind Russell and Marie Wilson. The term WAC refers to Women’s Army Corps, which was started during World War II and abolished in 1978 when women were fully integrated into the Army.

“I was in a military justice class with Rosalind Russell and on the rifle range with Marie Wilson,’’ Onesko remembered of the film.

After training, Onesko was assigned to Fort Dix, New Jersey, where she worked as a secretary and then to Valley Forge Hospital in Pennsylvania which treated wounded from Korea. Onesko received an honorable discharge with the rank of private first class in 1952.

The couple married Nov. 13, 1954 and made their home in Thompson 1, Redstone Township. He worked as a school teacher and she as a unit clerk at Brownsville General Hospital. They had eight children and were married 43 years before George died in 1997. Onesko now has 17 grandchildren and four great-grandchildren.

Kula explained to the crowd that Onesko is the oldest of seven children and noted, “I was three years old, probably four when she came home. I remember we lived at Ralph and standing at the living room window as she was in her uniform walking down the street and crying my eyes out because she was like my second mom. And she looks exactly like my mom. In 2001, she became the matriarch of the Gadd family. She’s our godsend.’’

“Thanks to all our veterans and thanks to you for everything you do for veterans,’’ Michael said to the auxiliary. “We appreciate it.’’