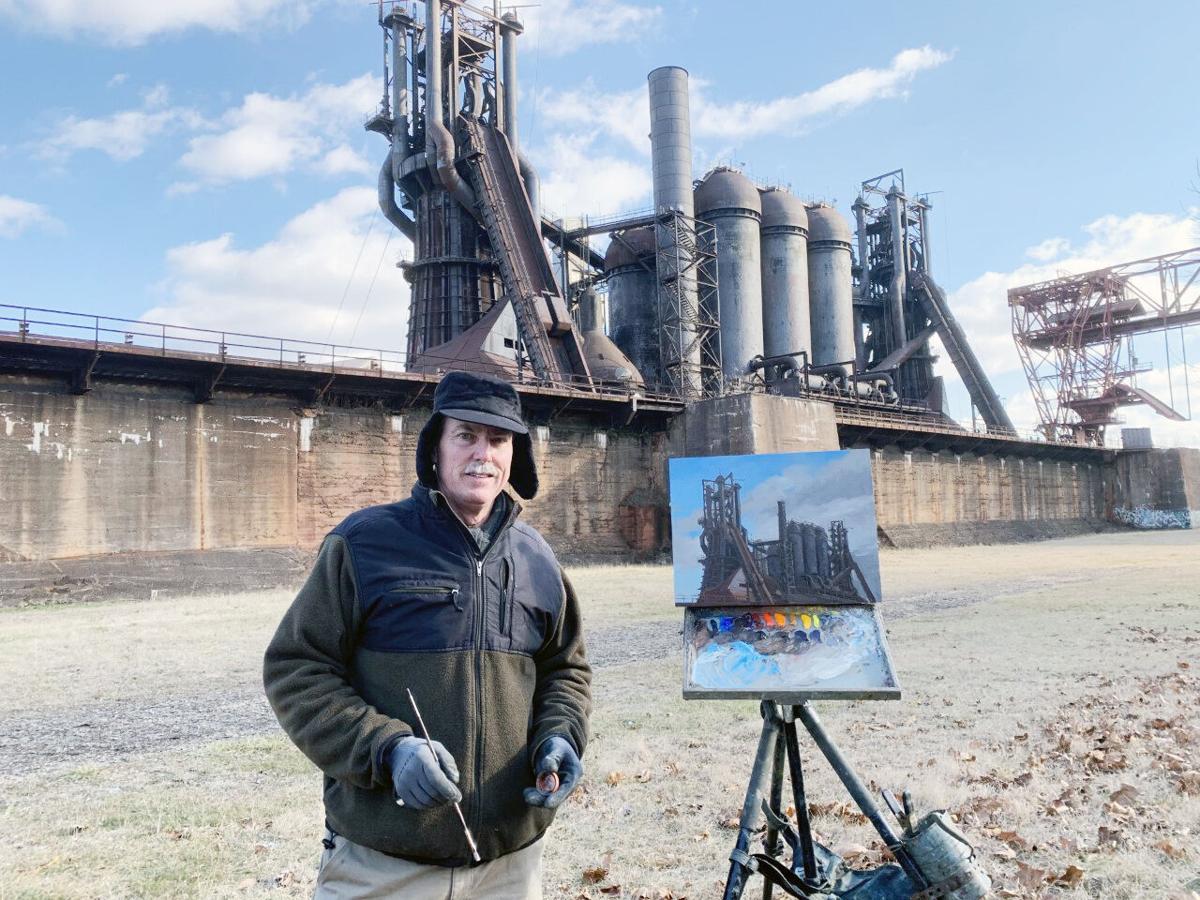 The artist Ron Donoughe working on site on one of his paintings. 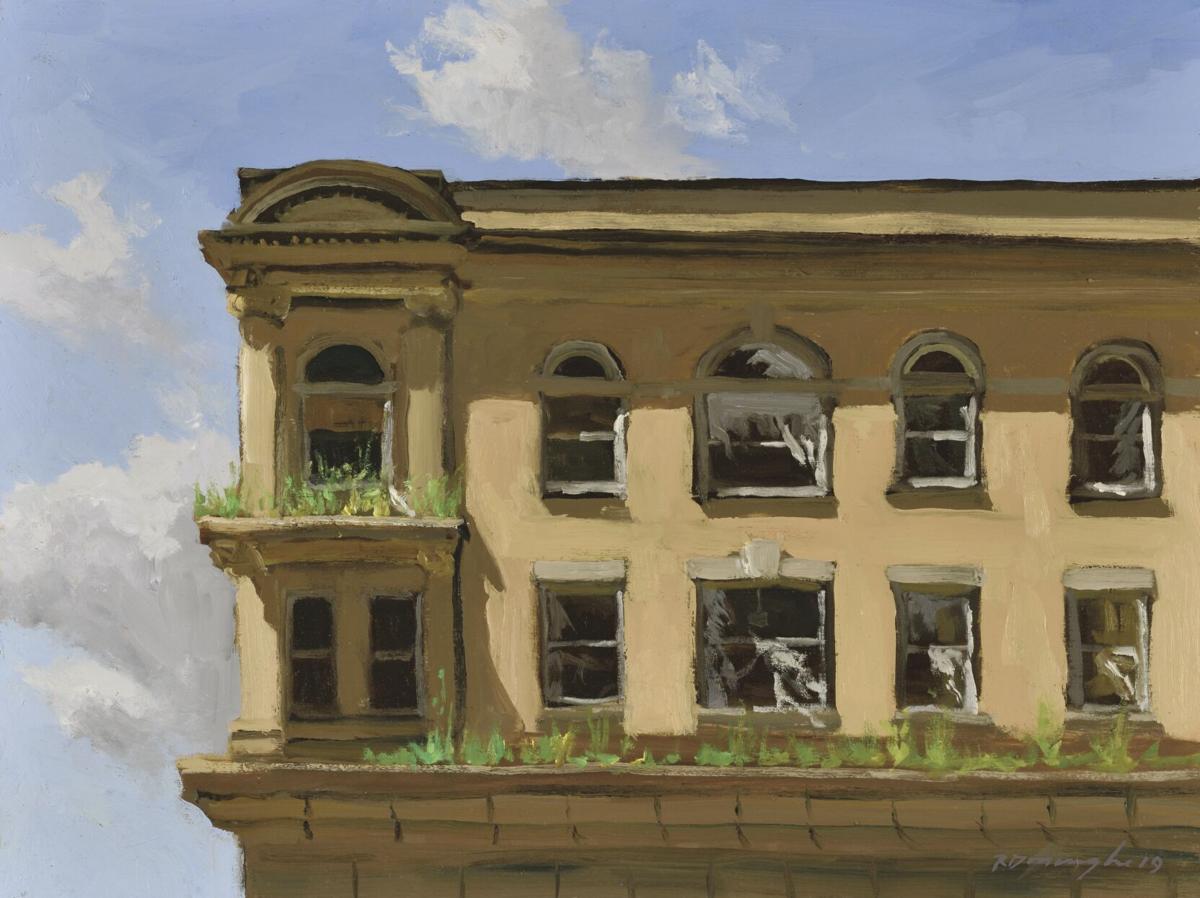 The realist paintings of Ron Donoughe focus on structures and places within the Pittsburgh region. 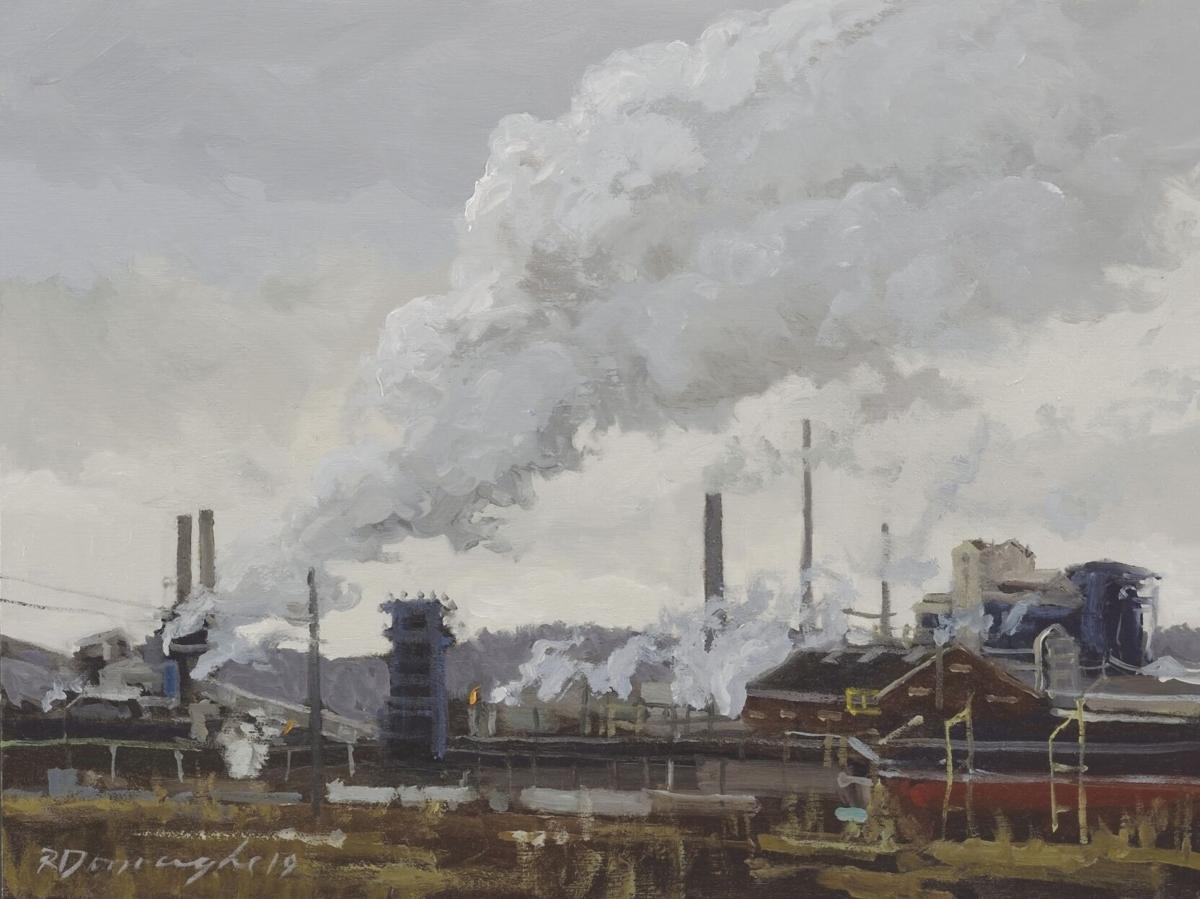 A painting by Ron Donoughe that depicts plumes of smoke rising from mills in Clairton. 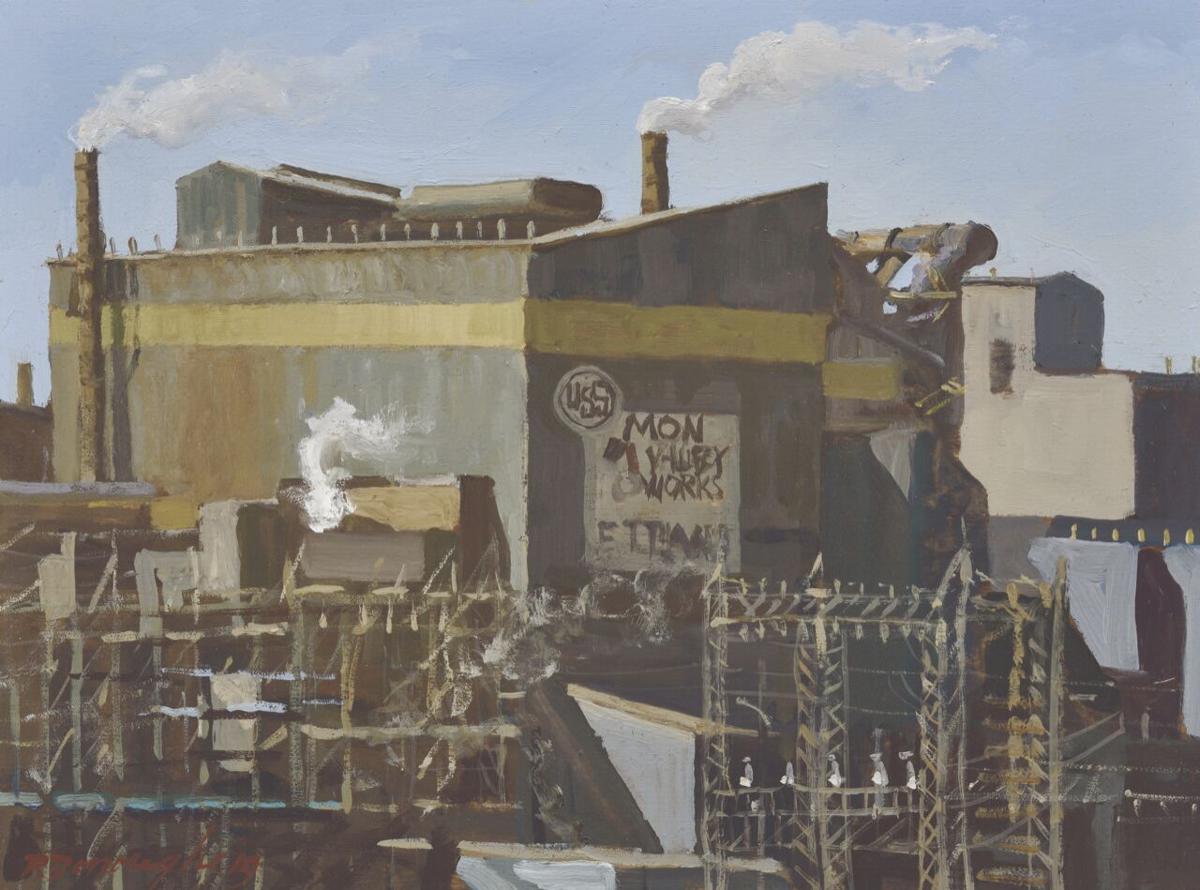 The Mon Valley Works, as depicted by the painter Ron Donoughe. 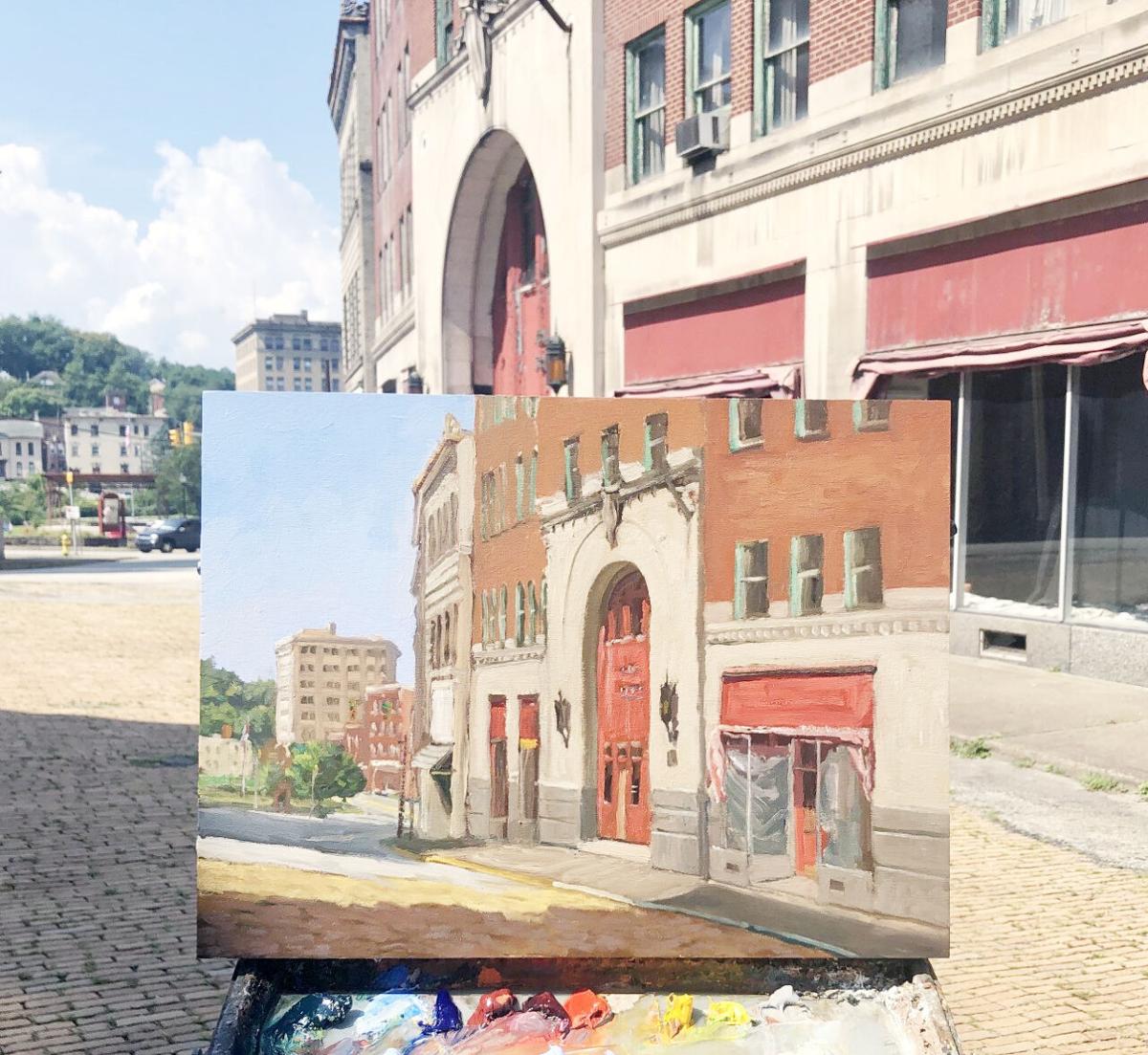 The painter Ron Donoughe working on location in Brownsville.

The artist Ron Donoughe working on site on one of his paintings.

The realist paintings of Ron Donoughe focus on structures and places within the Pittsburgh region.

A painting by Ron Donoughe that depicts plumes of smoke rising from mills in Clairton.

The Mon Valley Works, as depicted by the painter Ron Donoughe.

The painter Ron Donoughe working on location in Brownsville.

“There’s no straight path to being an artist,” according to Ron Donoughe, and that’s a fact he can firmly attest to.

Before settling into full-time work as a painter, Donoughe punched the clock as a gravedigger and a chicken catcher, with job duties that included grabbing a hold of and loading poultry.

Donoughe jokes that being a chicken catcher was truly a “fowl job.”

Much less foul – or fowl – has been Donoughe’s preoccupation with capturing landscapes, industrial and neighborhood scenes throughout the Pittsburgh region, which the 63-year-old native of Cambria County describes as “a painter’s paradise.” His images of the Monongahela River and some of the communities that stand along it will be the focus of an exhibit at California University of Pennsylvania which opened Monday on the third floor of the Manderino Library and will continue through Dec. 3.

Bearing the name “Brownsville to Braddock: Paintings of the Monongahela Valley,” it explores both the natural beauty of Southwestern Pennsylvania and the beauty of its aged and sometimes forlorn structures.

According to Donoughe, “I think there’s beauty to be found in things that are a bit dilapidated.”

The exhibit had originally been scheduled to take place before the onset of the coronavirus pandemic, and shares the same title of a collection of Donoughe’s paintings that was published in March by University of Pittsburgh Press. In addition to Brownsville and Braddock, it contains scenes captured in Charleroi, Monessen, McKeesport and other communities.

“We were planning on and off and being hopeful,” Donoughe explained.

A resident of Pittsburgh’s Lawrenceville neighborhood for 30 years, Donoughe believes the region lives up to the “painter’s paradise” designation thanks to its four seasons, varied topography, and the fact that the countryside can be accessed from the city in relatively quick time.

“We’re really lucky, in that it’s so interesting all the time,” Donoughe said.

Donoughe draws inspiration from the Ashcan School of painting, which flourished in America in the late 1800s and early 1900s. Turning away from idealized scenes or images of the upper crust, it had artists depicting gritty street life and day-to-day existence among the country’s rank-and-file. Donoughe works in the “plein air” style, which means, basically, painting in “the open air.” Rather than toiling in a studio, going on his memory or a photograph, Donoughe sets up a canvas at the site, stays on his feet, and completes a painting within a few hours. He also cites the American realist painter Edward Hopper as an influence, as well as Vincent Van Gogh.

Donoughe’s work is on permanent display at the Senator John Heinz History Center, and is part of the collections of several museums and corporate entities, such as the Westmoreland Museum of American Art, the Southern Alleghenies Museum of Art in Ligonier, UPMC Children’s Hospital of Pittsburgh and Point Park University. His paintings of scenes from Indiana County and the Allegheny Mountain region have also been collected in books.

For information on hours at the Manderino Library, visit library.calu.edu.