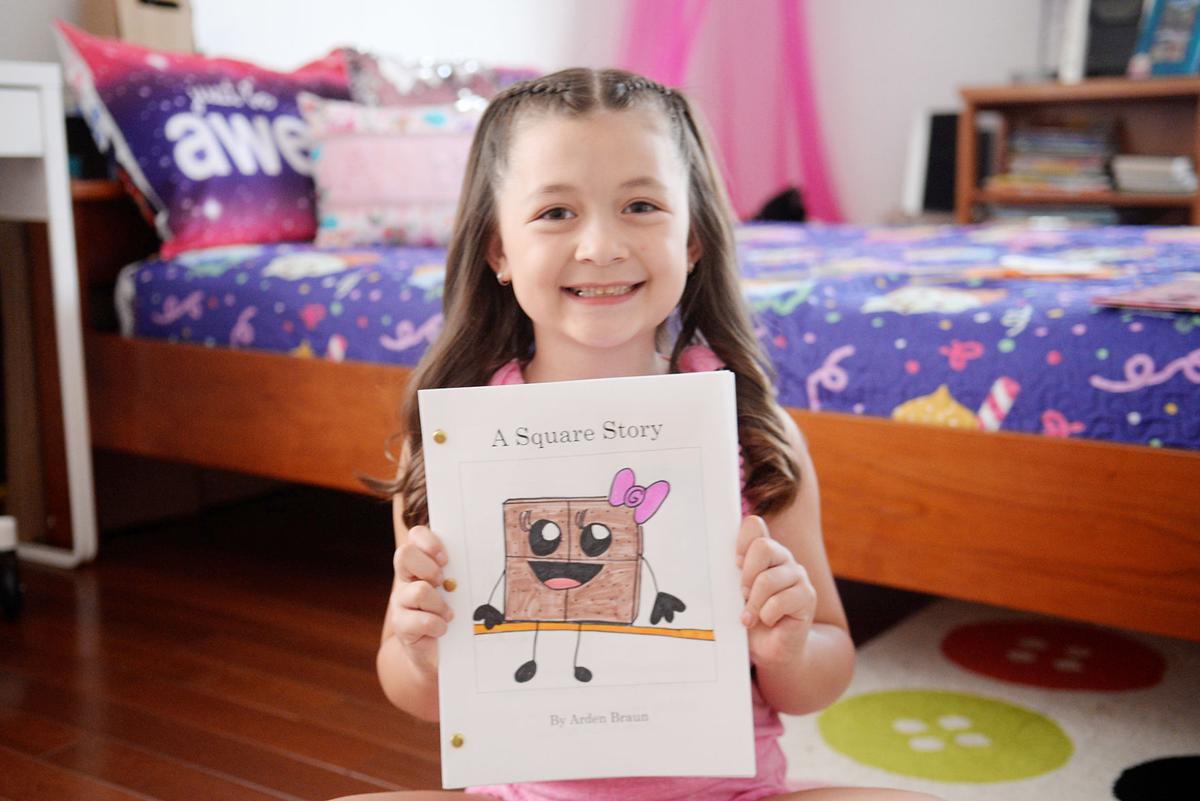 Arden Braun, 7, won first place in the 2020 WQED Writers Contest in the 1st Grade category for her book, “A Square Story.” The story is about Gretta the Graham Cracker, who learned to appreciate her unique qualities. 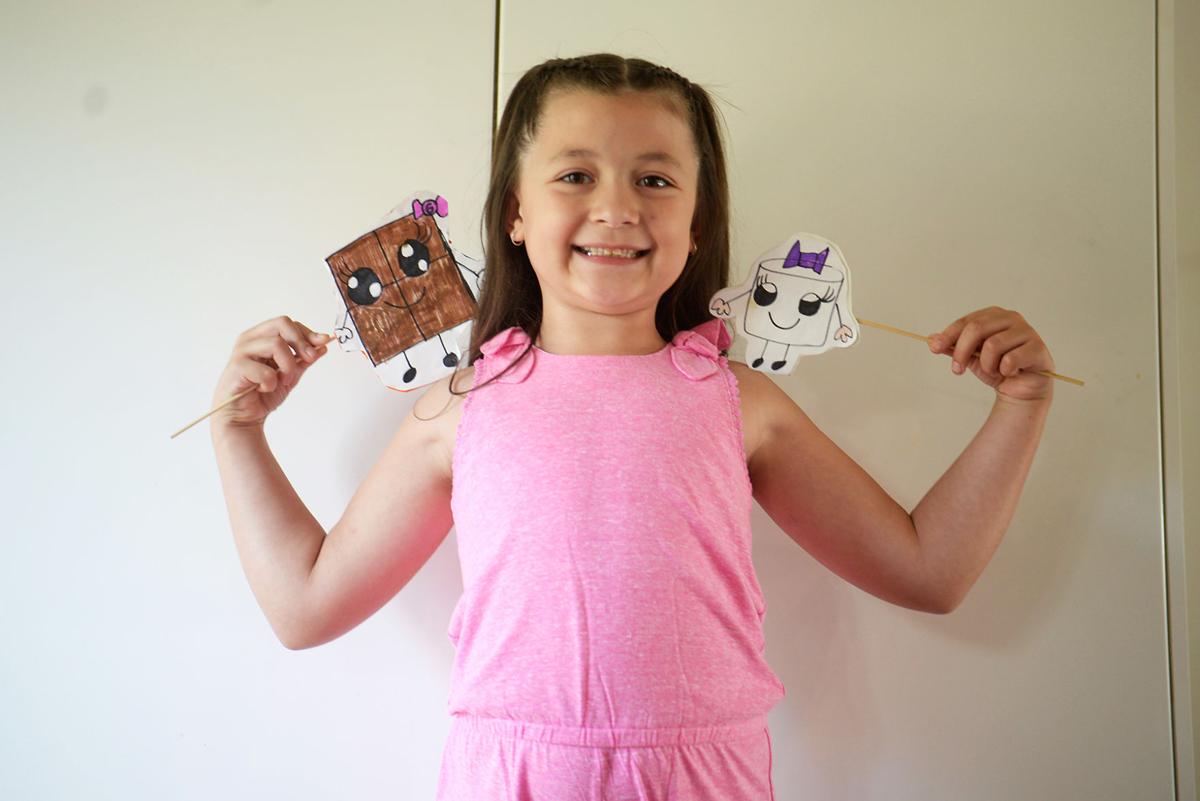 Arden Braun holds up puppets she made of her storybook characters, Gretta the Graham Cracker and Mimi Marshmallow. She won first place in the first-grade category of the 2020 WQED Writers Contest for “A Square Story.”

Arden Braun, 7, won first place in the 2020 WQED Writers Contest in the 1st Grade category for her book, “A Square Story.” The story is about Gretta the Graham Cracker, who learned to appreciate her unique qualities.

Arden Braun holds up puppets she made of her storybook characters, Gretta the Graham Cracker and Mimi Marshmallow. She won first place in the first-grade category of the 2020 WQED Writers Contest for “A Square Story.”

A Hatfield Elementary School student won first place in the 2020 WQED Writers Contest in the first-grade category for her story about a graham cracker named Gretta who learned to appreciate her unique qualities.

“You should always love yourself,” said 7-year-old Arden Braun. “You shouldn’t think you aren’t loved. That’s why I said, ‘Just be yourself,’ because everybody likes you.”

Arden entered the contest after students learned about it at school, and she was awarded first place from a pool of 180 other first-graders. She wrote and illustrated her story, “A Square Story,” and submitted a video reading the book with a backdrop of her illustrations. She also made puppets of her characters as a bonus.

The story follows Gretta the graham cracker, who started thinking less of herself because so many of her friends had “amazing shapes,” and she was a square. Gretta tried to change her shape by rebaking herself using a star-shaped cookie cutter, and by mushing herself into a heart-shaped ice cube tray. Her friend, Mimi Marshmallow, was watching from the pantry. Mimi shouted at Gretta to stop. She told her no one could have s’mores without her, and that Gretta needed to be a square “to hold all her gooey goodness.”

Arden said she wants other kids to know that everyone has special qualities. Sometimes, she feels like a square graham cracker, she said, and it makes her feel happy.

Hatfield Elementary Principal Heidi Mears said she was impressed by Arden’s story and encourages students to write every day.

“‘A Square Story’ was written with such originality and creativity. As I read Arden’s story, I looked forward to turning each page to see what would happen next. I cannot wait for more children to get the opportunity to read and enjoy this sweet story. I am looking forward to the sequel!” Mears said. “I encourage the teachers at Hatfield Elementary to have our students write daily across all content areas. The PBS Kids Writers Contest was just one more opportunity for our students to express their ideas. All students were encouraged to enter this contest and to write on!”

“Arden’s choice in story theme is magnified in our world. As Gretta the graham cracker would say – ‘It’s always best to be yourself,’” she said.

Children in kindergarten through fifth grade were invited to enter the contest. The kindergarten and first-grade categories were required to be 50 to 200 words, along with at least five original illustrations. They were judged on creativity and originality, story structure and literary devices, and relevance, quality and originality of illustrations, according to the PBS Kids contest rules.

WQED Writing Contest Manager Michelle Imler said the message of Arden’s story was important, and they were impressed by her illustrations.

“Arden’s illustrations were very adorable and her story had a great message! We all need a friend like Mimi to remind us it is best to just be yourself,” she said.

“I thought maybe it should have a good pop to her,” she said.

Writing the story took a “really long” time, she said, but she was proud of the finished product and loved every part of it. She wrote two pages every day, she said.

Arden’s mom, Angela Braun, said she was proud of her daughter and her persistence in finishing the story.

“My husband and I are both super proud of her. It took a lot of time and effort to get this done,” she said.

They are impressed by her illustrations, and she said she thinks the thoughtful moral of her daughter’s story is something everyone should keep in mind.

“I think kids these days need that. There’s so much bullying and cyberbullying,” she said. “You feel so much pressure to put the filter on Instagram or Snapchat, and I think we all need that sometimes, to remember to be ourselves.”

While Arden said she’s not sure yet what she wants to be when she grows up, she might want to be a writer like her grandma.

For now, Arden is planning a sequel to “A Square Story,” featuring Gretta and Mimi’s friend, a chocolate.

“You always need the chocolate,” she said, “or else it’s not a s’mores.”