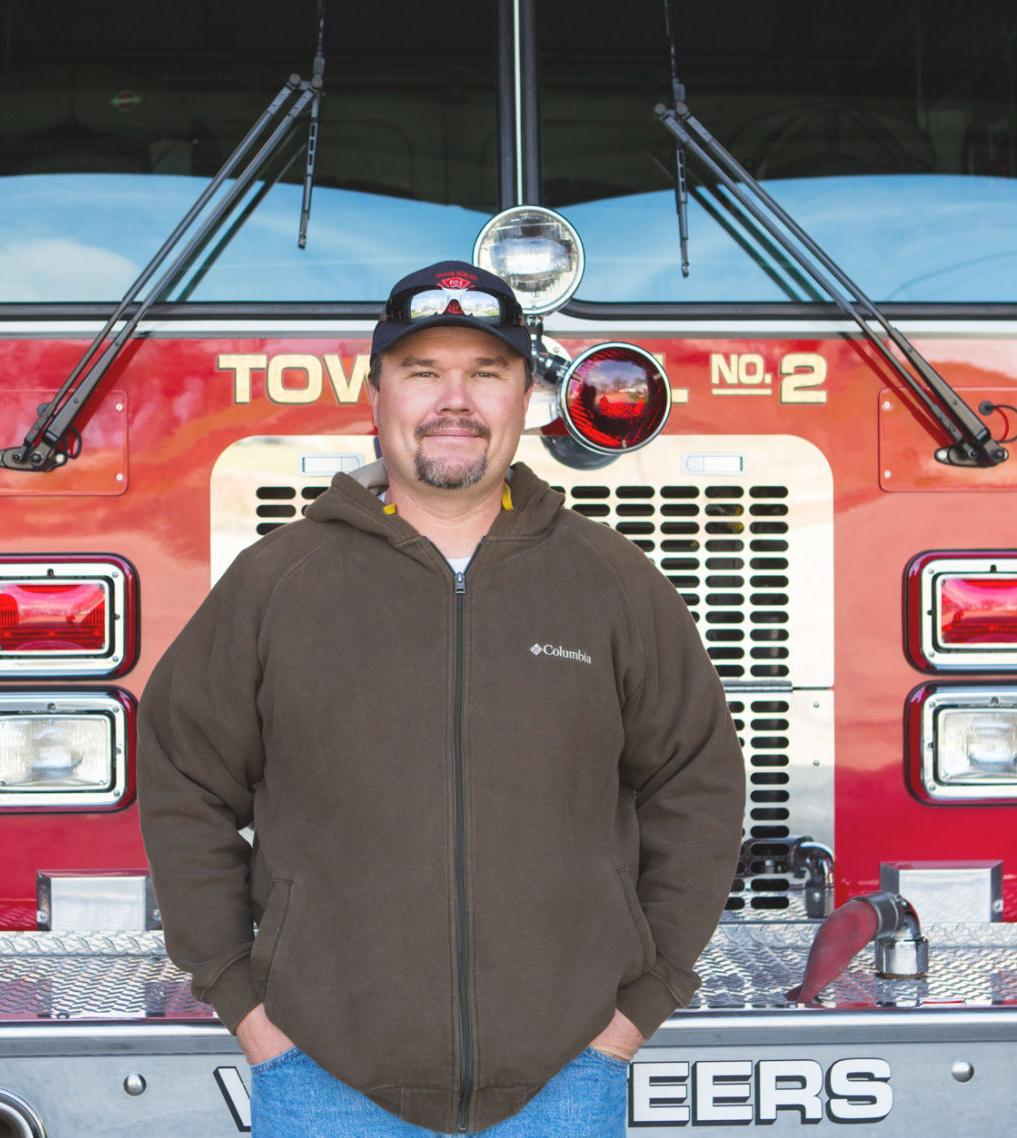 Steve Miske, treasurer of the Tower Hill #2 Volunteer Fire Department, stands with one of the fire engines he maintains. 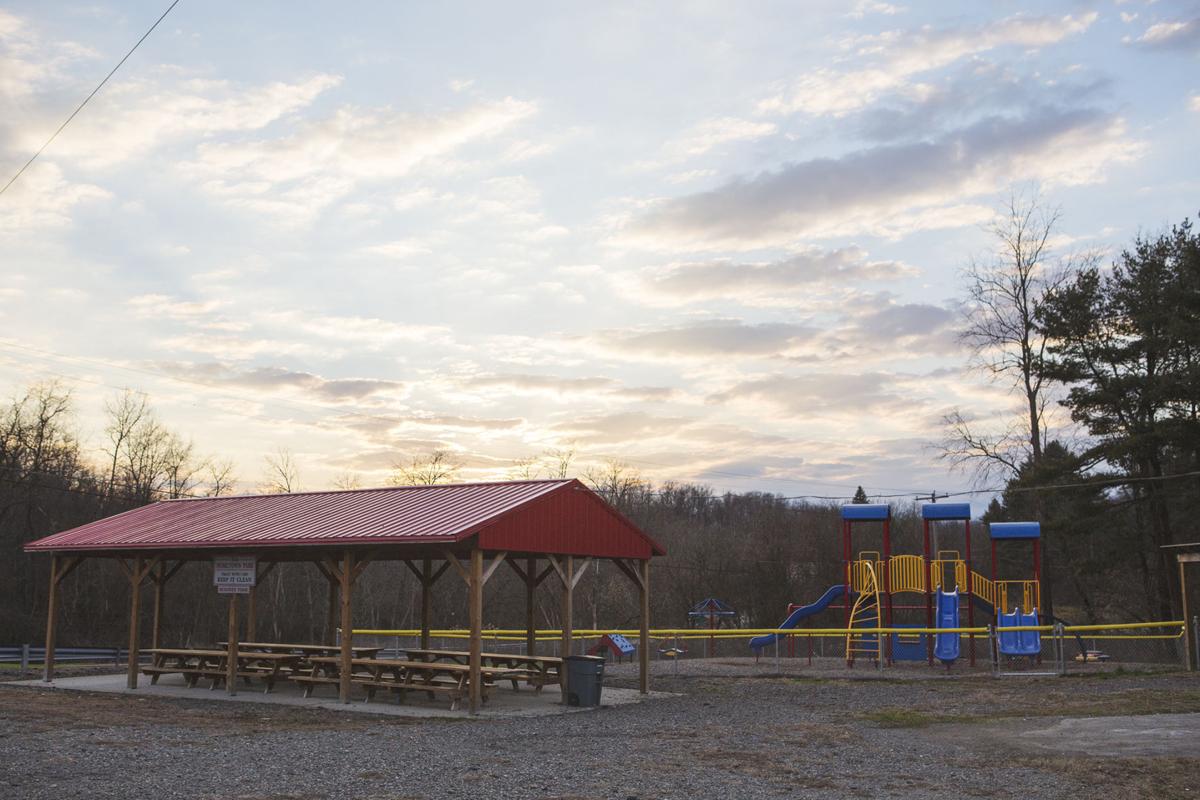 The sun sets behind the playground at the Tower Hill Athletic Field on New Salem Road. 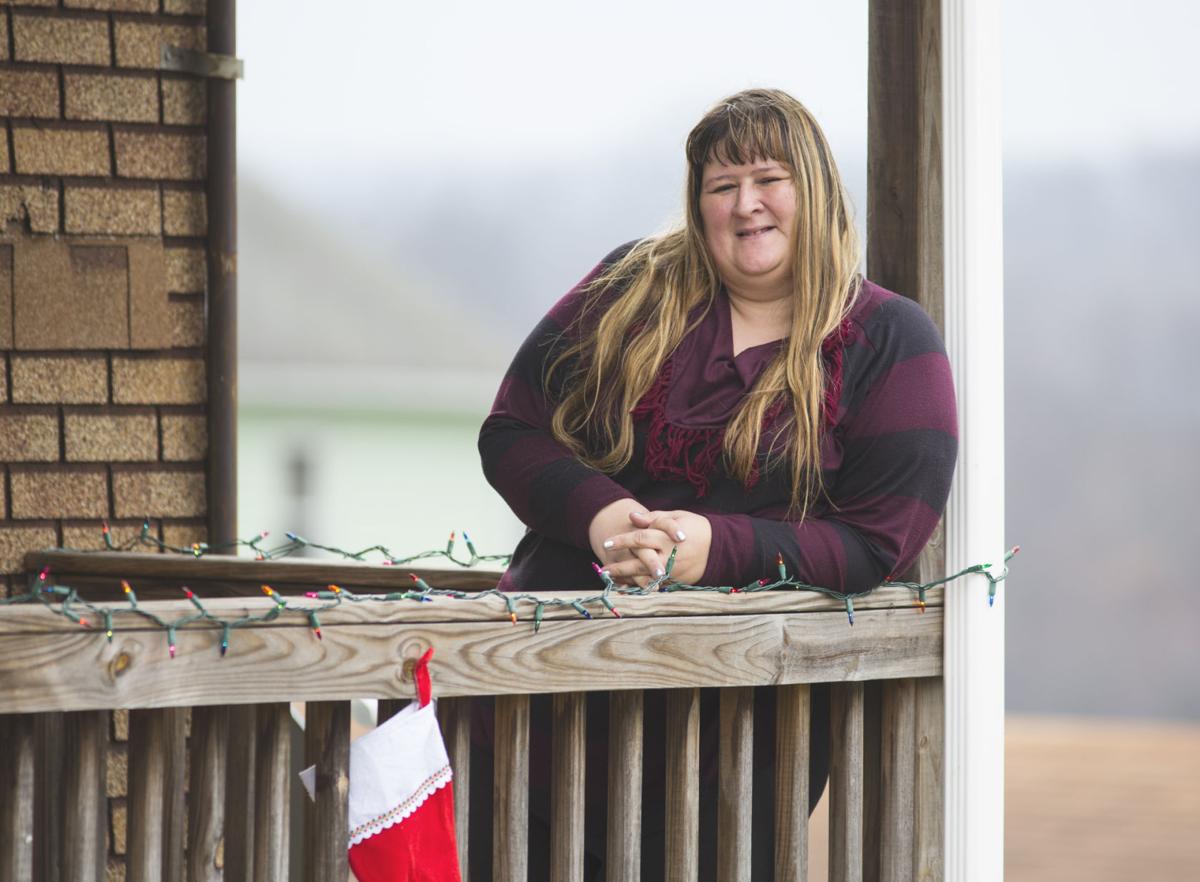 Jackie Benucci poses for a portrait on her front deck in Tower Hill No. 2. 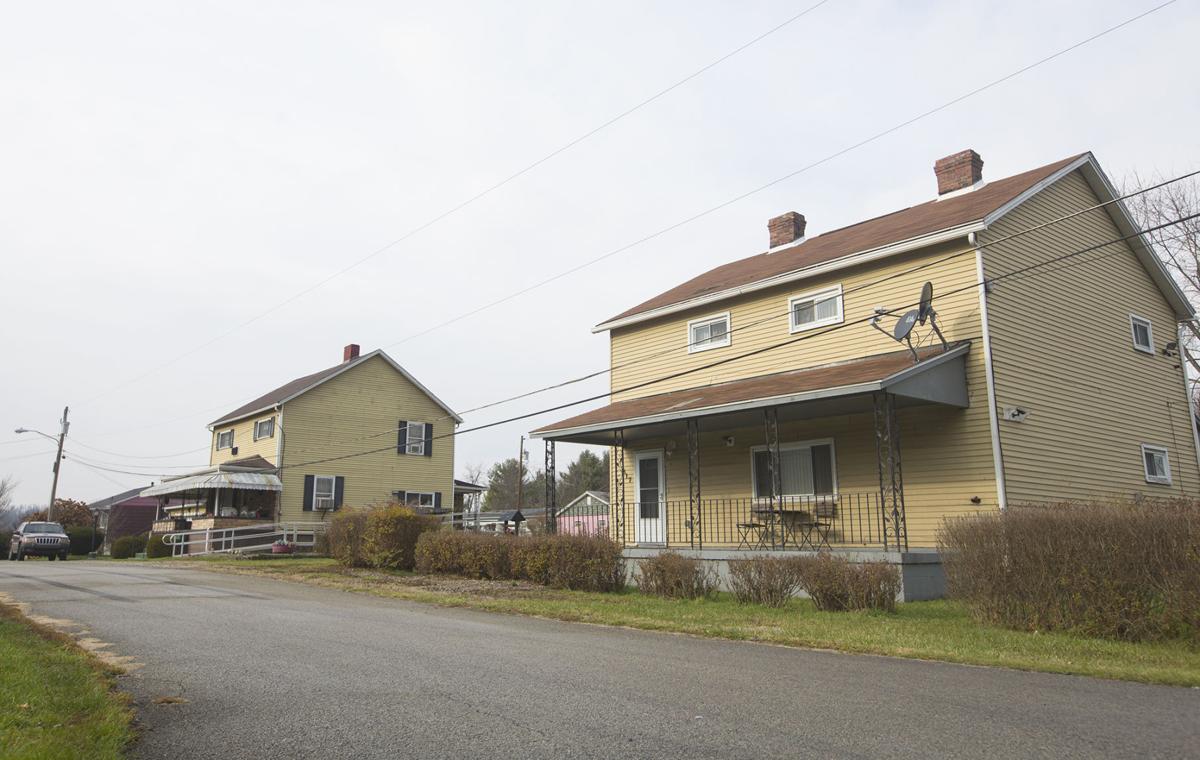 Houses on Fourth Street in Tower Hill No. 1 are lit by the sun shining through a part in the clouds. 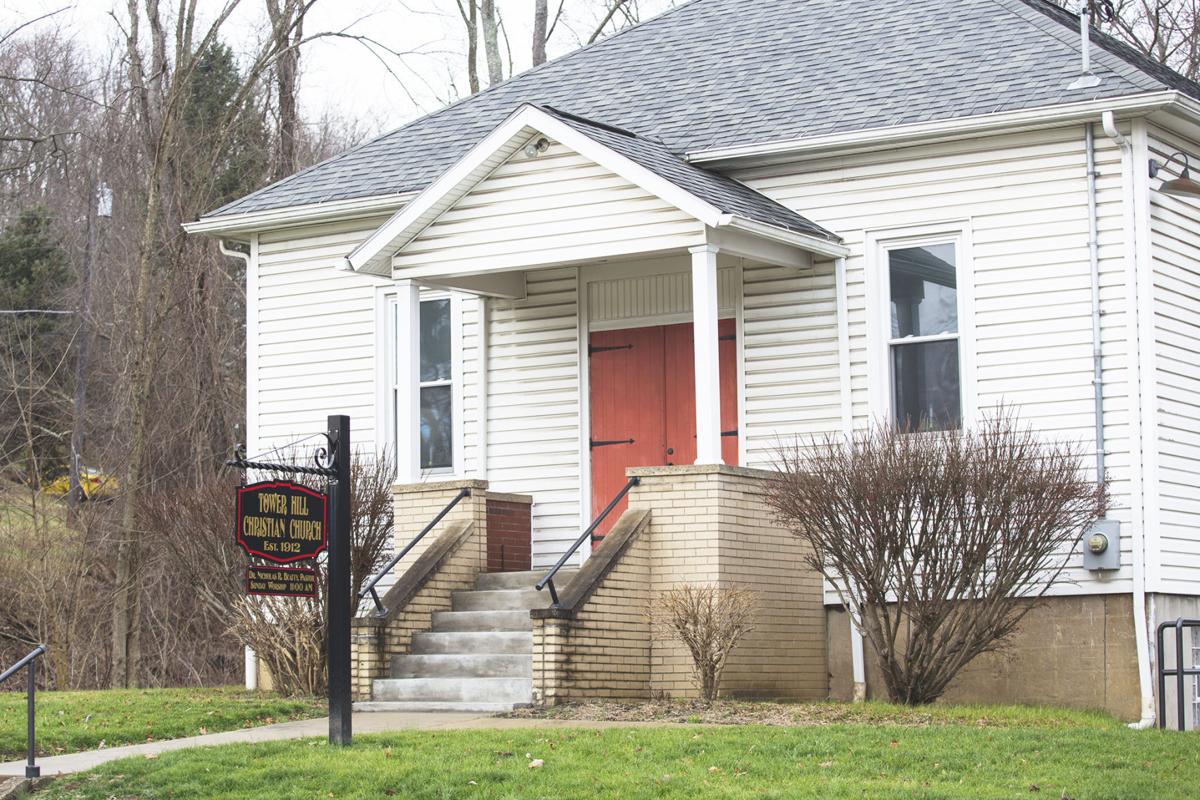 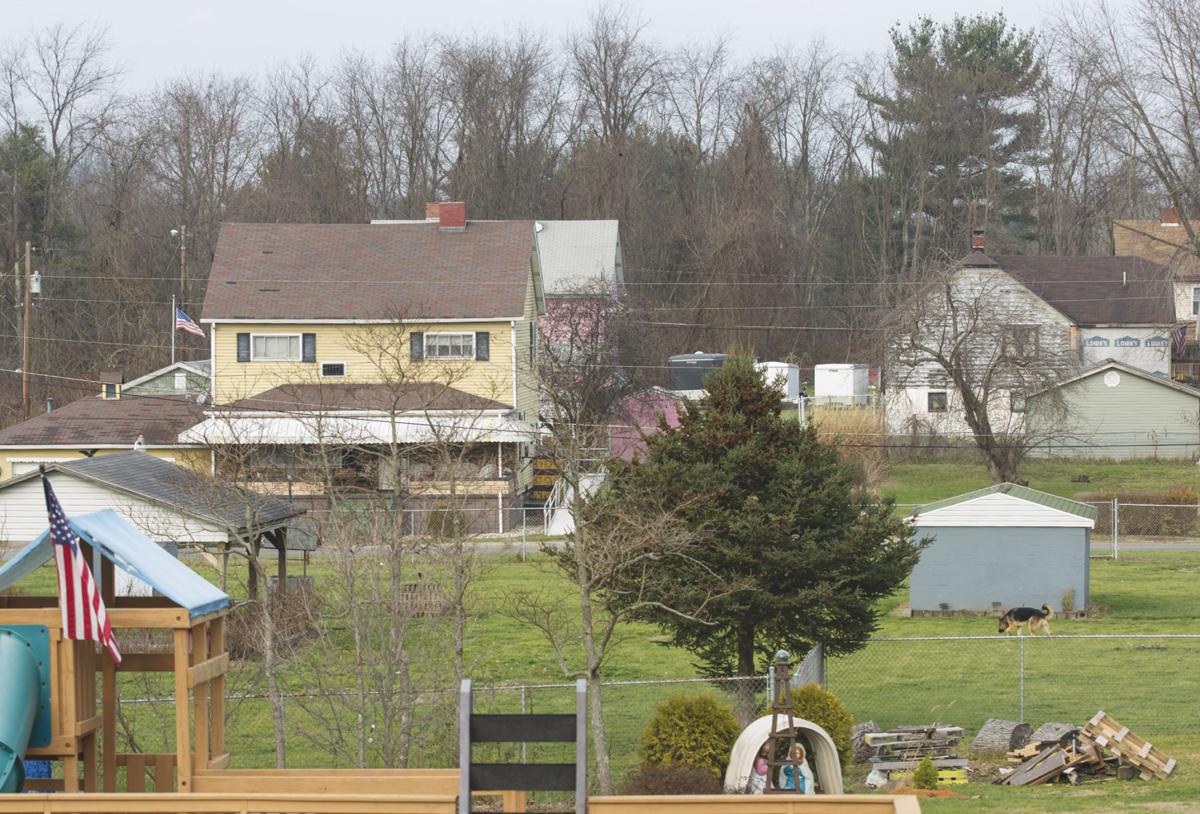 American flags, nativity scenes and a German shepherd round out the Americana in Tower Hill No. 1. 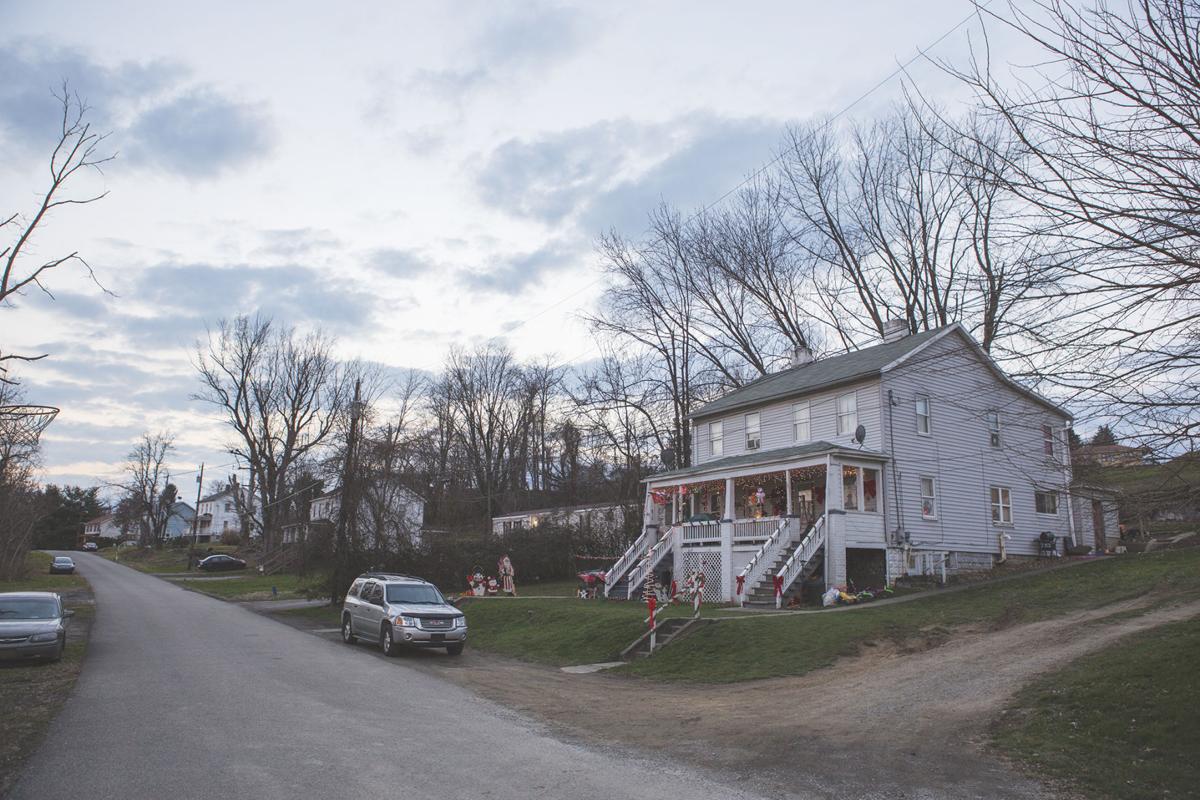 Christmas lights brighten a house decorated for the holidays in Tower Hill No. 2. 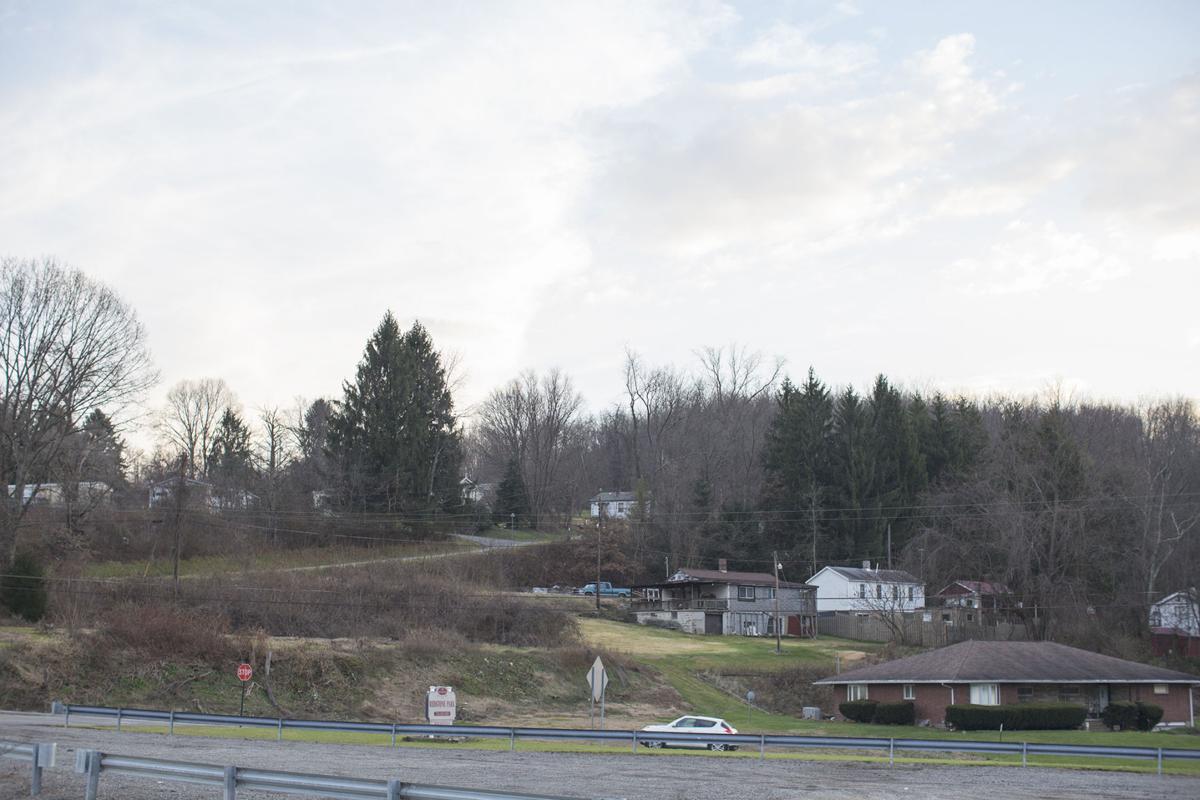 Part of Tower Hill as seen from the Tower Hill Athletic Field on New Salem Road. 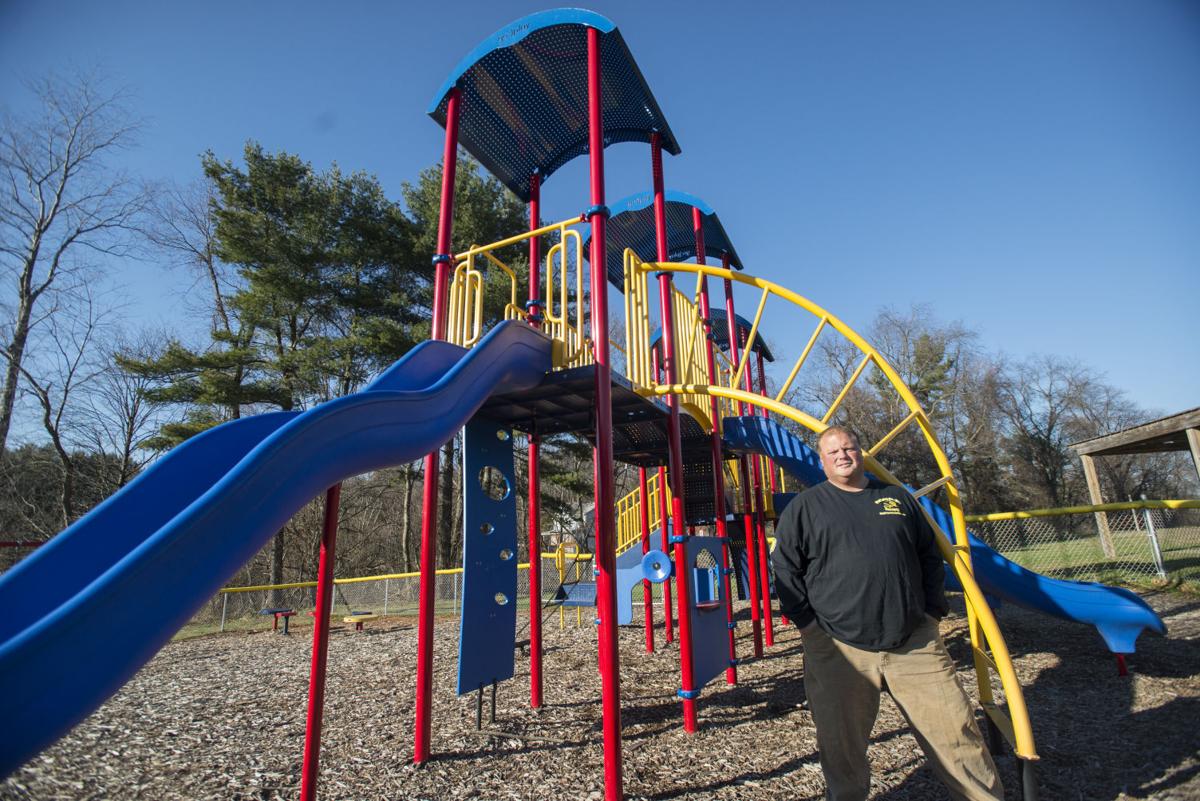 Mike Cetera, Redstone Township supervisor, is pictured at one of two playgrounds located at Redstone Park. 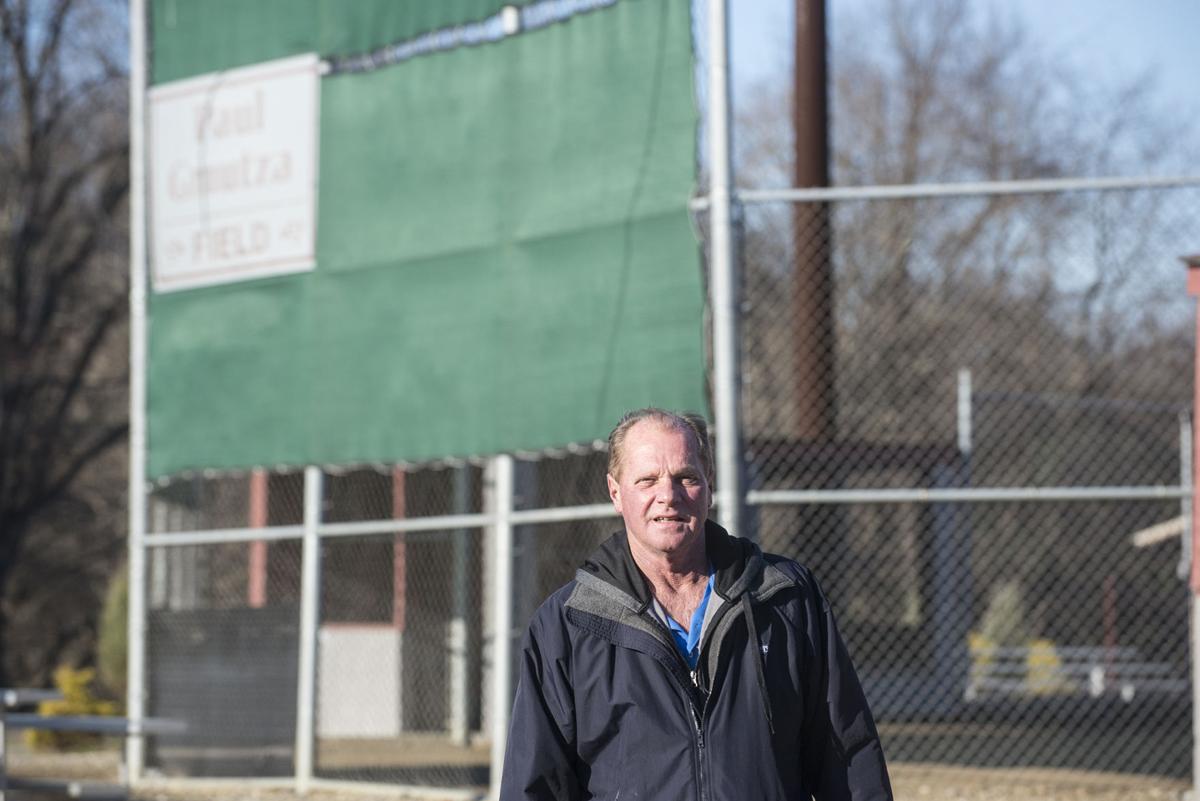 Larry Williams, Redstone Township superviser, is pictured at Paul Gumitza Field at Redstone Park. “In the ’60s and ’70s baseball and softball was big here, now it’s mostly a park for the kids,” said Williams.

Steve Miske, treasurer of the Tower Hill #2 Volunteer Fire Department, stands with one of the fire engines he maintains.

The sun sets behind the playground at the Tower Hill Athletic Field on New Salem Road.

Jackie Benucci poses for a portrait on her front deck in Tower Hill No. 2.

Houses on Fourth Street in Tower Hill No. 1 are lit by the sun shining through a part in the clouds.

American flags, nativity scenes and a German shepherd round out the Americana in Tower Hill No. 1.

Christmas lights brighten a house decorated for the holidays in Tower Hill No. 2.

Part of Tower Hill as seen from the Tower Hill Athletic Field on New Salem Road.

Mike Cetera, Redstone Township supervisor, is pictured at one of two playgrounds located at Redstone Park.

Larry Williams, Redstone Township superviser, is pictured at Paul Gumitza Field at Redstone Park. “In the ’60s and ’70s baseball and softball was big here, now it’s mostly a park for the kids,” said Williams.

Editor’s note: The following story is part of a monthly series of articles that examine the people, culture and history of the small towns that dot the landscape of Fayette County.

Southwestern Pennsylvania is dotted with small villages and communities known as “patch towns” created during the coal boom. Tower Hill No. 1 and No. 2 fit the very definition of this.

Elaine H. DeFrank, the oral historian for the Coal and Coke Heritage Center at Penn State Fayette, The Eberly Campus, explains the origins of the phrase patch town and how communities like Tower Hill came to be.

“The word patch is from the German word spelled p-a-c-h-t, which means to rent or be a tenant. The word was anglicized by early English and Irish settlers to ‘patch,’” said DeFrank. “The coal companies owned groups of houses near the coal mines and rented them to employees. Many of the patch towns were named after the companies that owned the house, the mines, the company stores.”

Small company-owned houses or cottages in Tower Hill No. 1 and No. 2 were not nearly as common in southwestern Pennsylvania as the typical duplex “patch house.” Most company-owned also featured outhouses or coal houses behind each of the dwellings, and few had indoor plumbing.

According to the Historic America Engineering Record comprised by the National Park Service in 1997, the company towns of Tower Hill 1 and 2 were established by the Tower Hill Connellsville Coke Company of Uniontown in 1906 and 1907 respectively.

Approximately 100 residents reside in the area known as Tower Hill No. 1, which is separated by the heavily traveled New Salem Road.

“It’s one of 22 villages in the township,” said longtime Redstone Township Supervisor Larry Williams. “All of them are coal mining villages, and all of them have their own identity.”

Eighteen dwellings exist on six streets in the Hillside residential area just behind Redstone Candies Distributing and Redstone Park and ball field. Most families have large well maintained yards along the maze of narrow streets that connect them to one another. Most of the old company-style houses have been updated or replaced by larger single family homes in the patch community.

Across New Salem Road is the smaller neighborhood of Tower Hill No. 1, known as Shantytown. Just four homes exist on its dead end Main Street and less than a dozen more on the four streets of the small community.

“A lot of towns, small as they are, are still divided in a way with the Shantytown versus the bigger houses versus the smaller houses. My recollection of the Shanty and Shantytown, from what I know is, the Shanties were built for the bachelors of the town, they weren’t the family homes. So they kept those on one side and the families on the other,” said Cetera.

Although much of the Shantytown portion of Tower Hill No. 1 lives up to its name, separating it from the Hillside section is a lovely park and recreation site known as Redstone Park.

The former Republic Softball League turned the property over to Redstone Township in 2000 according to Williams, who has served as a supervisor in the township for nearly 24 years.

“We have been adding to it ever since. We get a lot of compliments on it and we maintain the park to the best of our ability,” he said.

Two ball fields are named in memory of former Republic Softball League pioneers Paul Gmutza and John “Red” Kolessar. A third field, used for T-ball, has been named in honor of Art “Arkey” Lent, a dedicated member of the community.

“Arkey did hours upon hours of volunteer work — building pavilions, laying block, you name it. He deserves to have something in his honor,” said Williams.

The ball fields are used by community organizations and the Brownsville Area School District and area residents utilize the park and its pavilions, which makes Williams proud.

“When it belonged to the Republic Softball League, I played there more than a few times in my life,” he laughed. “I’m happy we were able to keep this a great recreational spot.”

Redstone Candy Distribution Company, which Albert Bashour began on Main Street in Republic as a “chocolate shoppe” in the 1930s, began production of fudge and other candy after World War II.

Although it still maintains its roots in the town where it began, the family’s candy manufacturing business was relocated just out side Republic to the Tower Hill No. 1 community in the 1980s, and it remains the area’s only big business.

“It was a good move for us. We took a building that was built in the 1960s and remodeled it,” said Bashour.

Noting that many patch towns in the region have former manufacturing buildings that are now decaying, Bashour is happy to have Redstone Candies, which employs dozens during the holiday season, maintaining a presence.

“We took something that might have gone into disarray and made a positive thing out of it.”

In Luzerne Township, Jackie Benucci and her family reside in the sleepy village of Tower Hill 2.

“It’s a nice little community to live in,” she said.

On an unseasonably warm late fall afternoon, Benucci was hanging holiday decorations outside her home on the corner of Oak and Plum Streets.

“I was living in subsidized housing, but there was too many problems with drugs and shootings. I wanted to find a place safe for my children,” said Benucci.

The 1995 Brownsville Area High School grad wanted to stay close to friends and family, so eight years ago she found a semi-detached duplex for sale in the tiny hamlet with a population of less than 400, and decided to call it home.

“It’s been a very nice place to live. I know most of my neighbors, and they are very friendly,” said Benucci.

The best part, she said, is that she feels safe, although Benucci admits she would like to see a park built.

The nearby Tower Hill No. 2 Volunteer Fire Department serves the nearly 300 residents of the patch and the area with ‘pride, courage, community service’ as their motto.

Steven “Joe” Miske, fire department treasurer, grew up in Tower Hill No. 2 where, he explains, becoming a firefighter is handed down from generation to generation.

“I was 14 years old when I joined. My buddy and I were given applications by our grandfathers, because that’s just what happens,” said Miske.

Growing up in Tower Hill No. 2, Miske said, most people have one thing in common.

“Everyone has a nickname in the patch,” he laughed.

“When I was a kid, the fire hall was the hub of all activity,” he said.

He said the department’s spaghetti dinners, cash bashes and picnics brought the tiny community together.

Today, the fire company continues an old tradition after the July 4th parade in nearby Merrittstown, according to firefighter and department secretary Barbi Vernon.

“We sell pulled pork sandwiches, and it’s still so popular. After the parade the trucks and people pull into this field behind the building, and it’s always a sell out for us. People really enjoy it,” said Vernon.

Vernon joined the department four years ago and remains one of a handful of female firefighters in the company.

“I love doing this. It means a lot to me to serve the community,” she said.

The company, which averages about 100 calls per year, is under the direction of long time chief Terry Stokes. The group has received two FEMA grants in the last 10 years which has allowed them to bring their truck totals to four, Vernon said.

Miske vividly recalls playing among the ruins of what the coal companies left behind.

“We would ride dirt bikes and play in the buildings and around the old coke ovens,” Miske laughed. “But all that has been reclaimed and all the reminders of the companies are gone.”

Production declined for Tower Hill Connellsville Coke Company and by 1920, the company sold off its operations at both Tower Hill No. 1 and No. 2 locations to Eastern Coke Company of Pittsburgh. By 1927, the brick beehive ovens and buildings were all but abandoned.

The ruins remained however, until the late 1990s when they were demolished.

Gone today are the coke ovens and dumping grounds, the coal company buildings and any evidence their booming existence.

The company stores and the larger halls where the multi-cultural gathering of workers and their families shopped, stopped by for a soda or spent time in fellowship, have also long since faded in Tower Hill. What remains are the residential structures in small villages that another generation continues to call home.

POISED FOR THE FUTURE

Cetera believes the region including patch communities like Tower Hill No. 1 and No. 2 are positioned well for the future.

“We’re on the edge of expansion. I mean it’s coming. There’s no way of stopping it. I think we are next in line to expand,” he said.

Improvements in infrastructure, specifically Route 43 making the county quickly accessible from both Morgantown and Pittsburgh, could create opportunities for small villages to become bedroom communities in the future.

“I think we’re going to be a suburb of a city that’s reachable and attainable and really family oriented. You can still play in your backyard. You can still know your neighbor,” said Cetera.