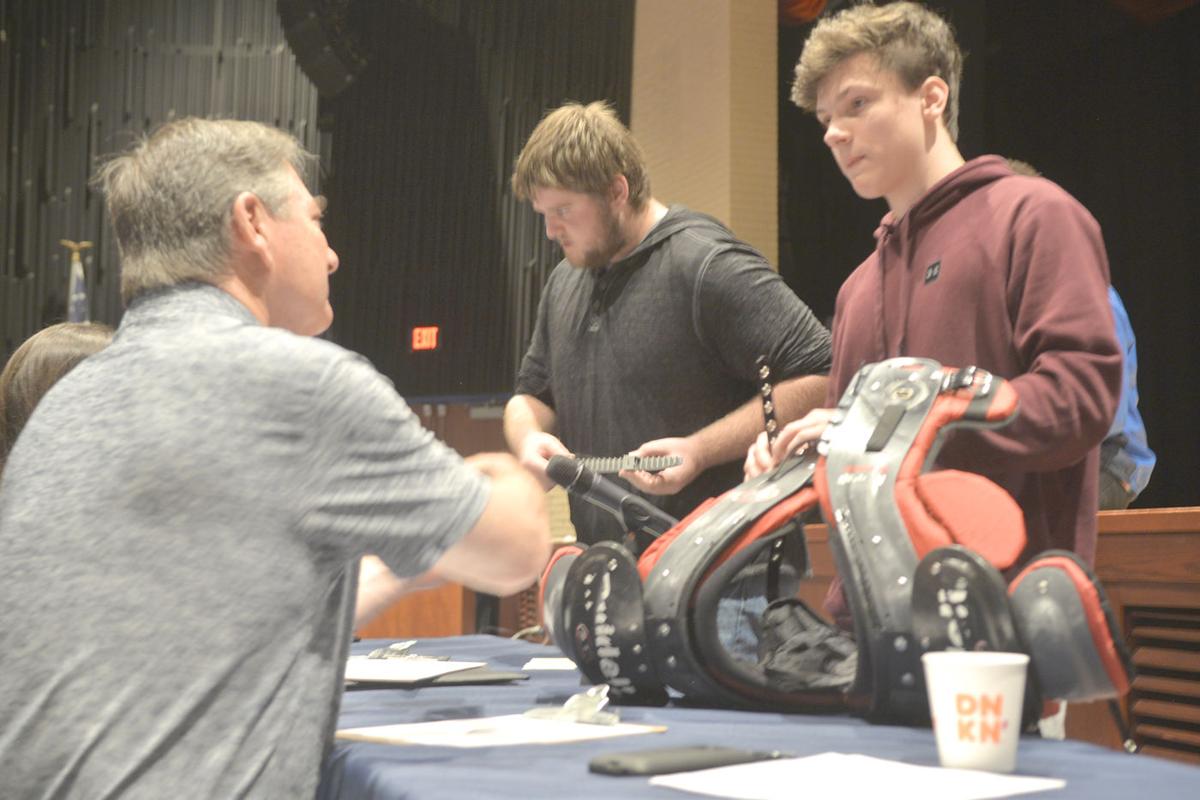 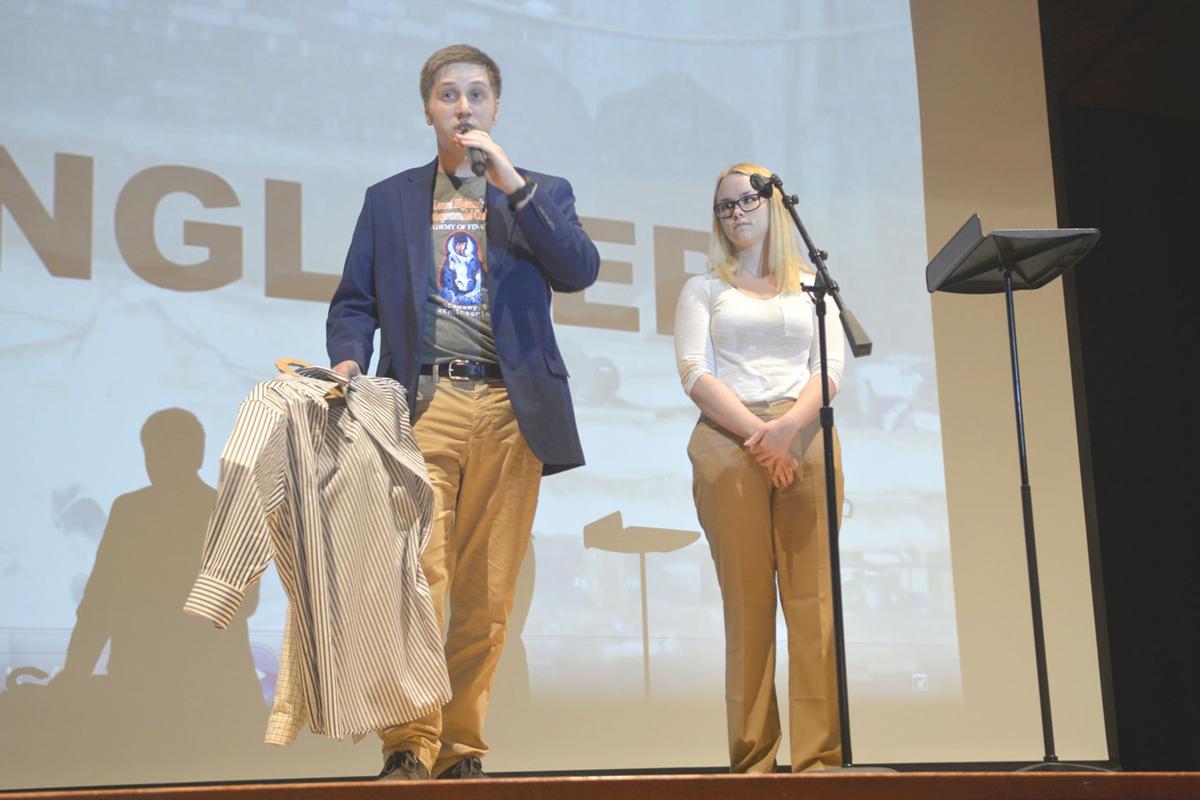 Laurel Highlands High School students Duane Phelan and Jenna Filitsky pitch their product, the “Hanglider” — a hanger equipped with arm attachments, during an entrepreneurial competition to determine who would represent the school at the Inventionland Institute Regional Invention Contest in Pittsburgh. 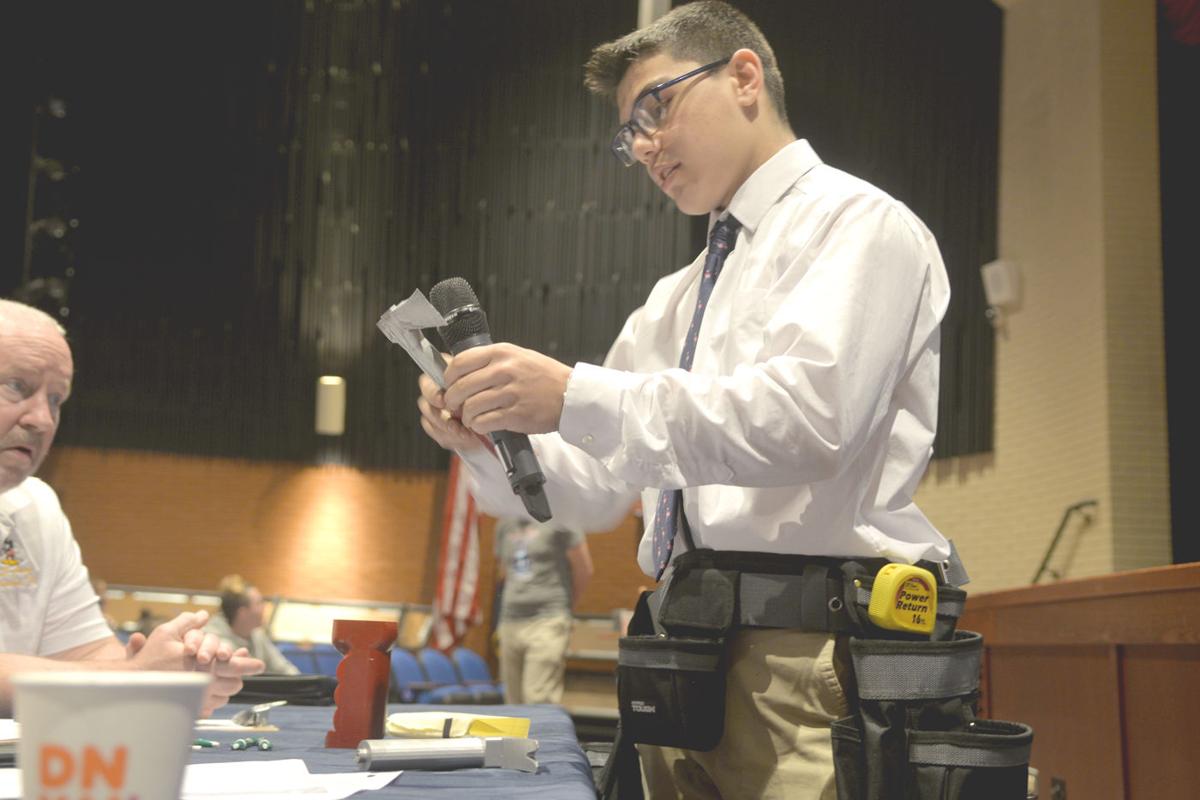 Parker Georgiana shows judges how to use his team’s invention, “The Ultimate Tool,” during an entrepreneurial competition between students enrolled in Laurel Highlands High School’s entrepreneurship and civil engineering classes.

Laurel Highlands High School students Duane Phelan and Jenna Filitsky pitch their product, the “Hanglider” — a hanger equipped with arm attachments, during an entrepreneurial competition to determine who would represent the school at the Inventionland Institute Regional Invention Contest in Pittsburgh.

Parker Georgiana shows judges how to use his team’s invention, “The Ultimate Tool,” during an entrepreneurial competition between students enrolled in Laurel Highlands High School’s entrepreneurship and civil engineering classes.

Two departments at Laurel Highlands High School teamed up to throw their students in with the sharks.

The school is among the latest to implement the project-based learning curriculum of Inventionland Institute, the education arm of the Pittsburgh-based invention and manufacturing incubator, Inventionland, that helps businesses develop and market new products.

Through Inventionland curriculum, students design and develop mock products that could be marketed to businesses or manufacturers. The program takes students through a 9-step process from idea to marketed product which they then pitch to a panel of judges while competing against their peers to be selected as the best.

As a result, an entrepreneurial competition held at Laurel Highlands at the end of April pitted seven teams and 18 students against each other for cash prizes and a spot on the line to compete in the third annual Inventionland Institute Regional Invention Contest.

“What makes this competition distinct is that it was focused on a product, not a whole business,” said Laurel Highlands business teacher Jeremy Bryson.

“It was in a ‘Shark Tank’-like competition setting, but it was more for a product specifically that the students could market to a larger company or manufacturer to sell or license their product to. That’s really what the competition was about — product idea and product design,” he said.

Finishing first and winning a $250 prize were Derek D’Annolfo and Brendan Kopich with their idea for an invention — called Delta F — that melts scrap plastic from 3-D printers into a reusable spool.

The competition was a joint effort between two departments at the school.

Students in the school’s entrepreneurship class, part of the school’s Academy of Finance career pathway, joined peers in the Pre-Engineering Career Academy’s civil engineering class, to be tasked with defining a problem and developing a product to solve that problem. Each group consisted of two or three students from both classes working together, said engineering teacher Kenny Riddell.

“They come up with an idea, expand upon that idea and follow the design process,” said Riddell. “Take it from start to finish.”

D’Annolfo and Kopich were joined by teammate Ryan DeCarlo two weeks later when they again pitched Delta F, this time to judges at Inventionland.

The team from Laurel Highlands competed against 14 groups of students from eight high school schools in western Pennsylvania, including IU1 Colonial and Waynesburg.

Jessie Tymoczko, director of client services for Inventionland Institute who provides outreach and curriculum support to teachers, said competitions give students an opportunity for personal and professional growth while showing off their hard work.

“When they’re going through the (Inventionland Innovation) course, not only are the learning about the inventing process but they’re learning a lot of what I like to think of as soft skills, or ‘boardroom skills,’” said Tymoczko.

“(The competition) is a great way to test out all of them and to show off the invention that they’ve made. So not only do we want the students to learn about the invention process, we’re also looking at (students being) future-ready and entering into the workforce and having the ability to interview, to talk peer-to-peer and to speak with confidence as part of what we’re trying to teach.

“What better way to do that than getting up in front of a panel of judges and talking about something you’ve made.”

Are you concerned about the Delta variant of the coronavirus?