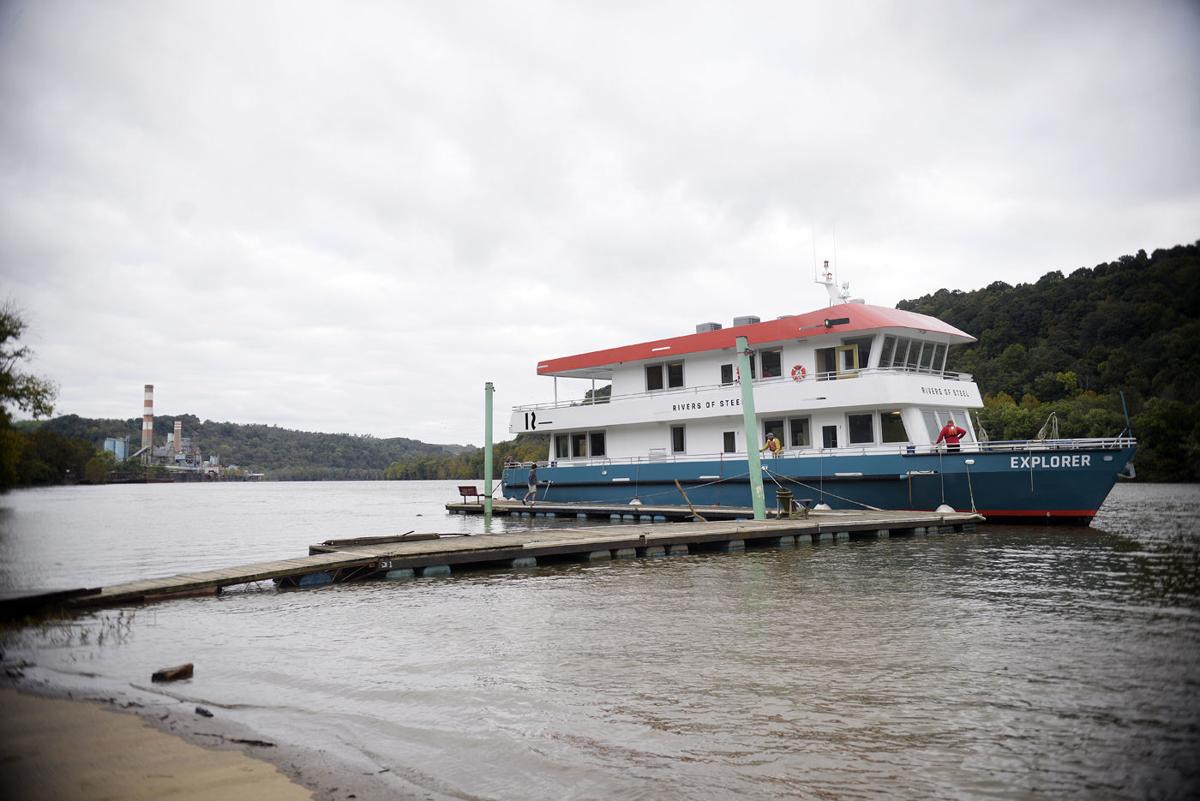 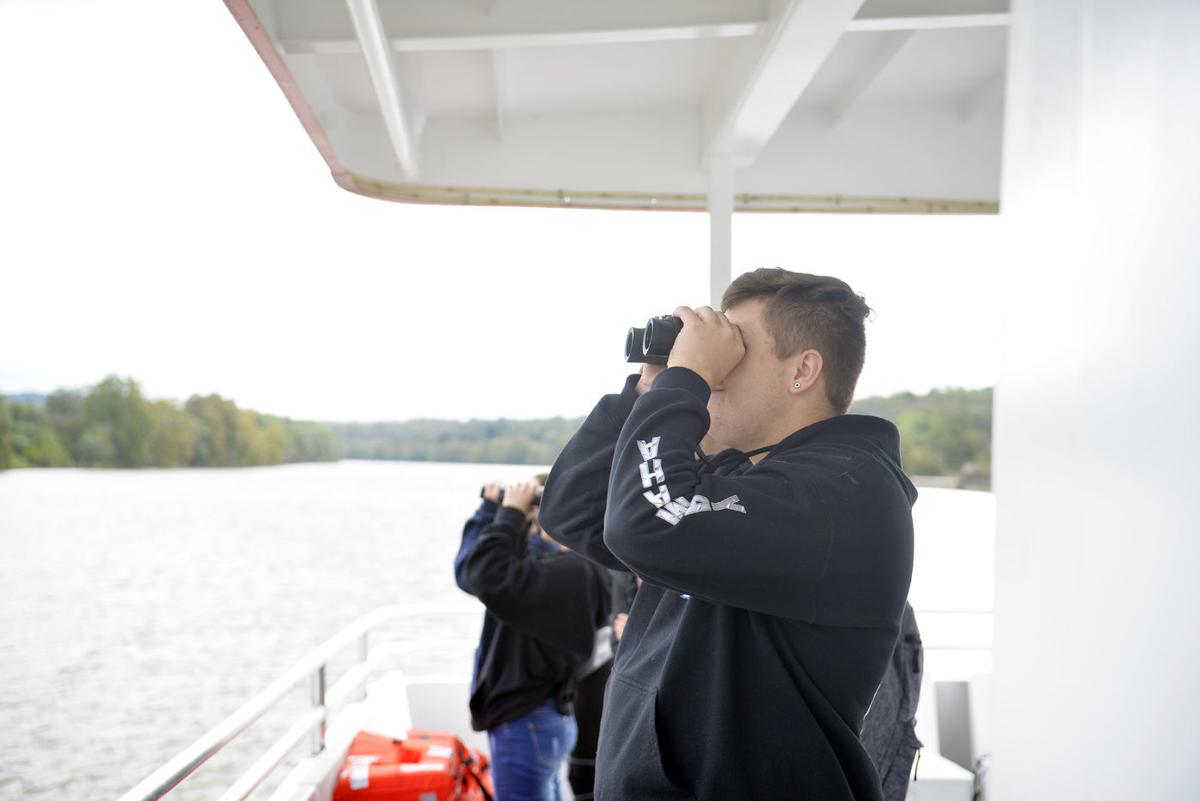 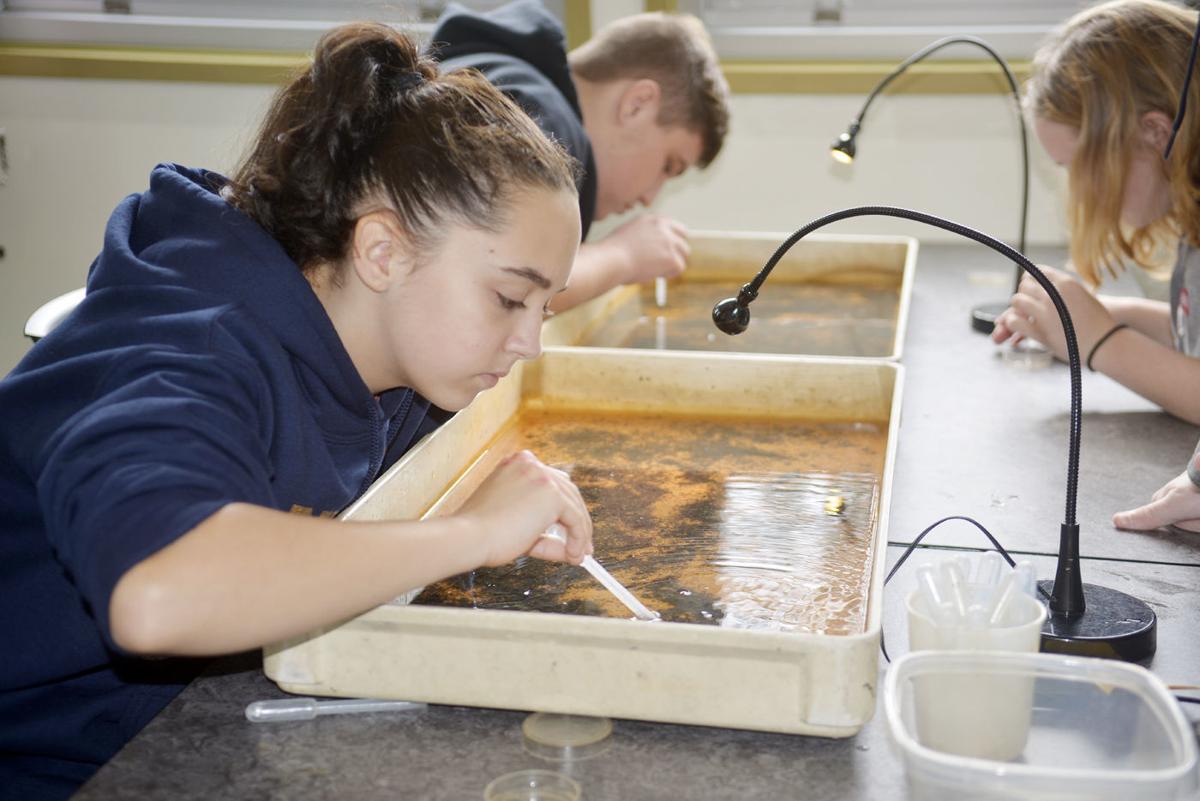 Ringgold ninth-grader Ariana Welch sifts through a pan of river water for macroinvertebrates. 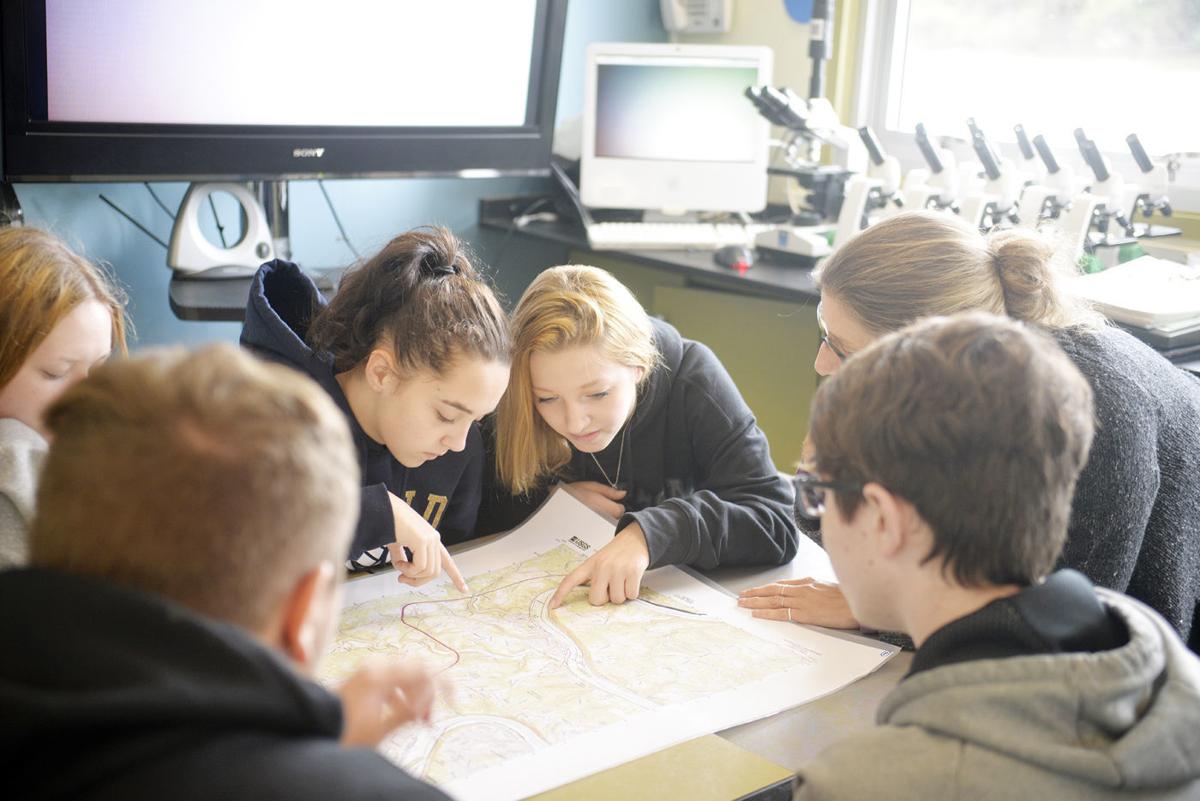 Ariana Welch and Taylor Suter, ninth-grade students at Ringgold High School, examine a topographical map during a lesson on watersheds aboard the River of Steel Explorer riverboat classroom. 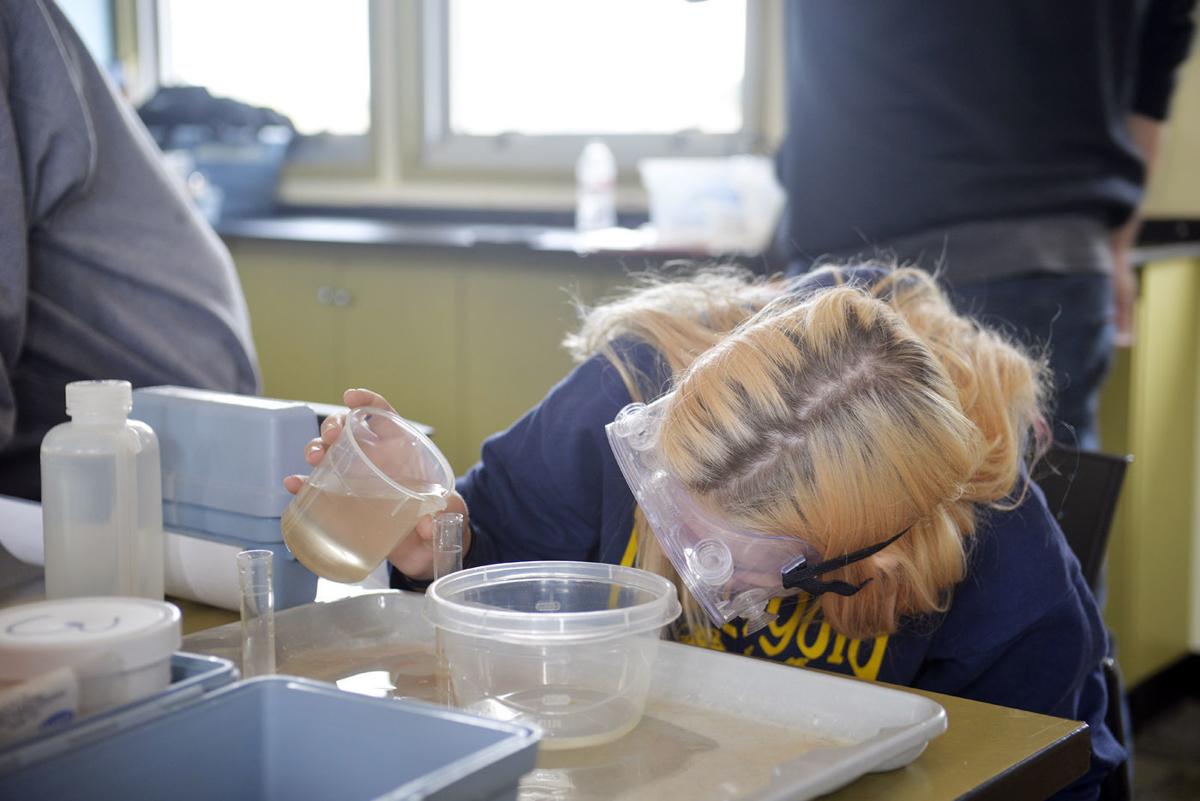 Haley Suter pours water sourced from the Monongahela River into a test tube to test its iron levels. 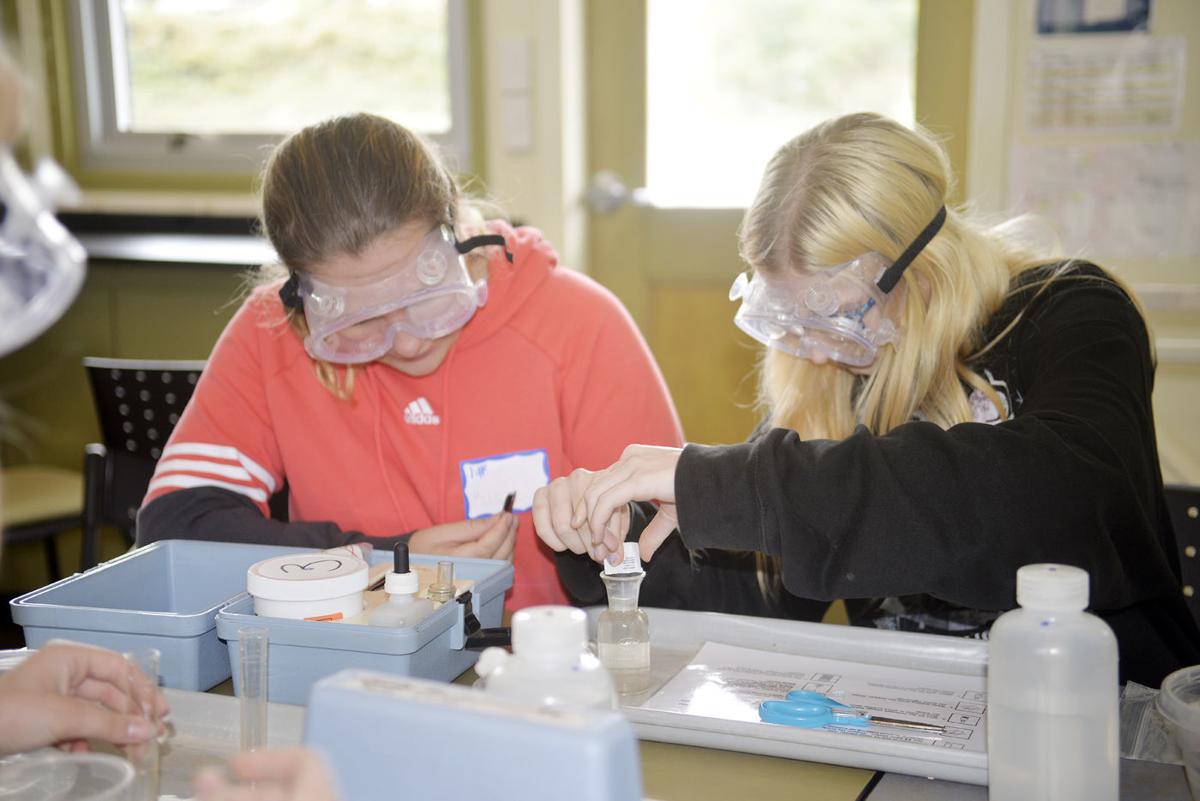 Ringgold ninth-grader Ariana Welch sifts through a pan of river water for macroinvertebrates.

Ariana Welch and Taylor Suter, ninth-grade students at Ringgold High School, examine a topographical map during a lesson on watersheds aboard the River of Steel Explorer riverboat classroom.

Haley Suter pours water sourced from the Monongahela River into a test tube to test its iron levels.

Instead of traveling to the field trip, this field trip traveled — or, more accurately, sailed — to them.

During October, students from various schools in the mid-Mon Valley have learned about local river ecosystems aboard the Explorer riverboat, offered by nonprofit Rivers of Steel National Heritage Area.

“The whole theme of the day is for the kids to form a hypothesis of if they think the river is healthy or not,” said Suzi Bloom, director of education for Rivers of Steel.

Starting with the construction of a hypothesis on the health of the rivers, students test their theory by applying scientific principles. They conduct experiments and make observations to support or refute their hypotheses, Bloom said.

Using living and nonliving indicators of water quality, students analyze and correlate their results against benchmarks and historical records. In a water chemistry lab, they test water from the Mon for various measures of health, such as iron, salinity and pH levels.

“We try not to sway their judgment too much. We want them to base their conclusions off of evidence they find in the experiments,” Bloom said.

Throughout a two-week residency at the Monongahela Aquatorium that ends Tuesday, the Explorer has hosted or is scheduled to host students from various schools within the Charleroi Area, Elizabeth-Forward, Monessen and Ringgold school districts, as well as Madonna Catholic Regional School in Monongahela, ranging from grades 4-12.

“For many of the age groups we host, this is one of their first exposures to water chemistry,” said Bloom.

Explorer‘s Monongahela residency is the first time Rivers of Steel has offered the riverboat classroom to area schools since acquiring the vessel and the river-based environmental science programming of nonprofit RiverQuest in mid-2016.

Typically docked at the headwaters of the Ohio River in Pittsburgh, the 12-year-old double-decker Explorer hosts “Environmental Science on the Three Rivers” to engage students in scientific inquiry while helping them to understand local watersheds.

For the residency in the Mon Valley, the program, subsequently re-titled “Environmental Science on the Mon” for the occasion, has been adapted to reflect local river ecology and examine the industrial history of the mid-Mon Valley.

“For the kids that live right here, it’s important for them to learn about the ecosystem in their backyard,” Bloom said.

“Many of the towns situated along the Mon are separated from the river by railroad tracks, and (river) access areas may be few and far between. So interaction with the water, especially in an educational setting — I don’t know how often they get to do that.”