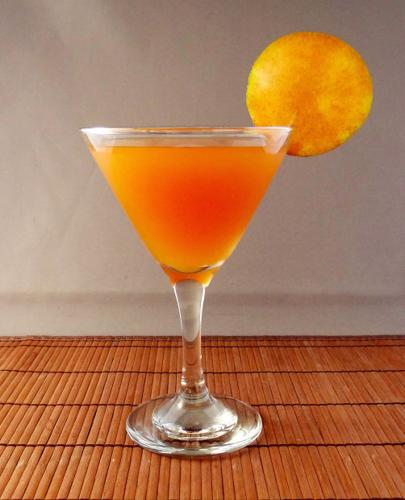 Featured is a caramel apple cocktail. 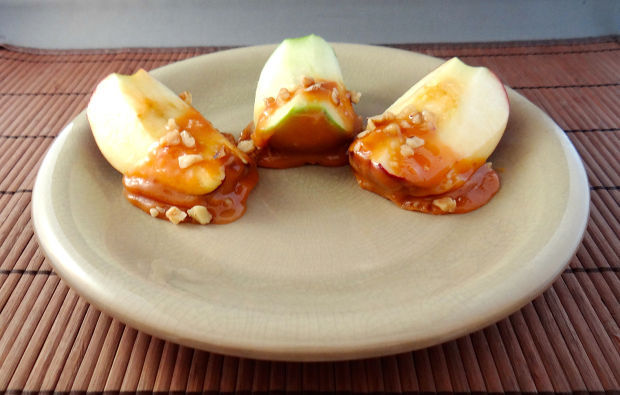 Apple wedges are dipped in caramel and sprinkled with nuts. 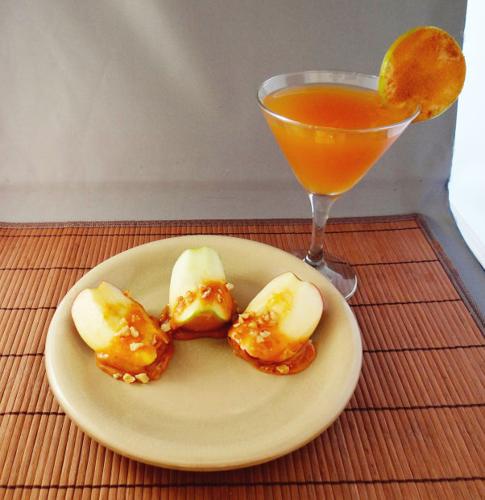 Featured is caramel — both in the cocktail and the sweet treat.

Featured is a caramel apple cocktail.

Apple wedges are dipped in caramel and sprinkled with nuts.

Featured is caramel — both in the cocktail and the sweet treat.

There is no refuting the fact that pumpkin is the undisputed king of the fall season. I love pumpkin just as much as the next guy, but I have to admit that there comes a time when I need a break from pumpkin and/or pumpkin spice flavored foods.

I’m not saying to ignore pumpkin for the rest of the season, but it might be time (after trying the recipe from my Just Cook It column in yesterday's Herald-Standard) to enjoy some other seasonal fall foods for a while.

If pumpkin is the undisputed king of fall, then apples are the next closest food to the crown.

I remember visiting a local farm as a young child and frolicking through the pumpkin patch. Another memory I have about those trips is drinking their fresh apple cider and seeing what seemed like thousands of paper bags overflowing with apples just waiting for someone (I was hoping my mother) to buy them.

Apples and fall are just simply meant to be together and deep down inside we all know and feel it. Pumpkin, at times, can overshadow apples since apples are readily available in all forms all year long. However, now is the best time to enjoy apples and one of my favorite beverages – apple cider!

There are more than 7,500 known cultivars of apples. Different cultivars are bred for different tastes and uses - such as eating raw, cooking, and cider production.

The United States is the second leading producer of apples in the world accounting for more than six percent of world production. China is the leader in world production of apples producing almost half of the world supply. If you’re wondering which countries round out the top six allow me to fill you in – Turkey is third followed by Italy, India, and Poland.

I believe in enjoying apples in the fall in a variety of ways. That being said, I also believe that it is nearly a crime to not enjoy at least one caramel apple during the fall season.

Before I share some tips for making caramel apples, it is very important and necessary to explain the distinction between caramel (or taffy) apples and candy (or toffee) apples.

Caramel apples or taffy apples are made by dipping or rolling apples in hot caramel, and then sometimes rolling them in nuts or other confections, before allowing them to cool. Generally they are called caramel apples when only caramel is applied and taffy apples when other ingredients are also applied, but there really is no hard rule that’s set in stone.

Candy apples, or what many people outside of North America refer to as toffee apples, are apples covered in a hard toffee or sugar candy coating. They are made by coating apples with a layer of sugar heated to the hard crack stage. This coating is generally made with sugar, corn syrup, water, cinnamon, and red food coloring.

Many people believe that caramel apples and candy apples are similar, but in reality they are two distinctly different preparations and items. I don’t consider one to be better than the other. Personally, I can enjoy either equally depending on the mood that I’m in at the time.

In my opinion, caramel apples are much easier than candy apples to make at home as they require very little skill to make them. I like this because you don’t really have to worry about messing up the recipe or your kitchen, as the process is fairly tidy as well.

For the cocktail, my goal was to create a drinkable adult version of the caramel apple. As adults we still love the same foods that we associate with childhood memories, but we also love to enjoy a few cocktails. I like to think that we can in fact have it both ways at times.

I found that using caramel vodka and apple cider with just a touch of fresh lemon juice to help the flavors pop does the trick remarkably well. Feel free to use the brand of cider that you prefer when making this cocktail.

For the caramel apple wedges, you can use the same recipe and use whole apples skewered on a stick if you want to go the traditional caramel apple route. I did the recipe with apple wedges only because I find that wedges are easier to eat and for sticking with the cocktail and hors d’oeuvre theme of this column, it just made more sense.

One tip that is very helpful is to rinse the apples under warm water and then dry them completely with a paper towel before cutting or dipping. The reason for this is that most apples have a thin layer of wax on the surface to make their skin appear shinier. Warm water will melt the wax and wiping it clean with a paper towel will help the caramel adhere to the surface of the apple.

Personally, I like it when the caramel begins to run off of the apple before it sets. It gives it a bit of a rustic look, and I enjoy the chewy texture contrast of the slightly pooled caramel with the crunchiness of the apple.

However, if you are more of a perfectionist and want a perfect layer of caramel - dip your apple only once or run it through the caramel with a single swipe to form an even layer. Then lightly scrape the bottom of the apple with a butter knife to remove any excess caramel. You’ll also want to cool your dipped apples in the refrigerator as quickly as possible to set up the caramel before it begins to pool or run.

Enjoy the recipes and celebrate fall with a seasonal item other than pumpkin. We still have plenty of time to go back to enjoying pumpkin, after a few caramel apples of course!

Mario Porreca of Belle Vernon is an entrepreneur, author, lifestyle strategist, and the host of Just Cook It Radio. He can be reached via his website at: www.MarioPorreca.com. Twitter: @MarioPorreca