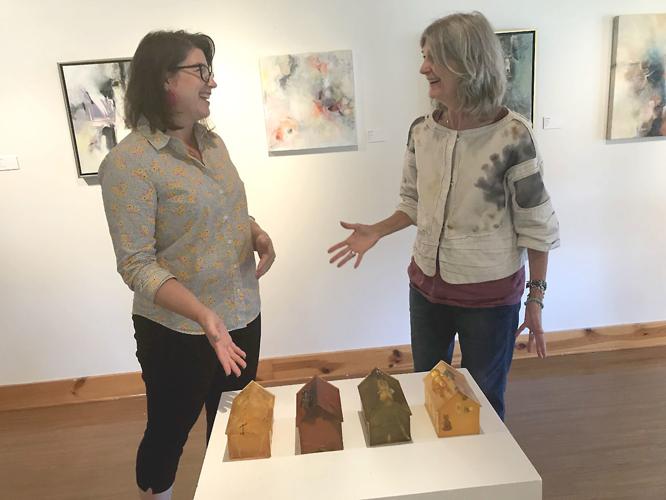 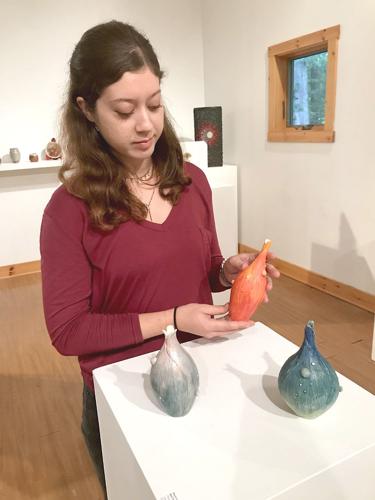 Stacy Larson shows off some of her work in the Touchstone staff exhibit. 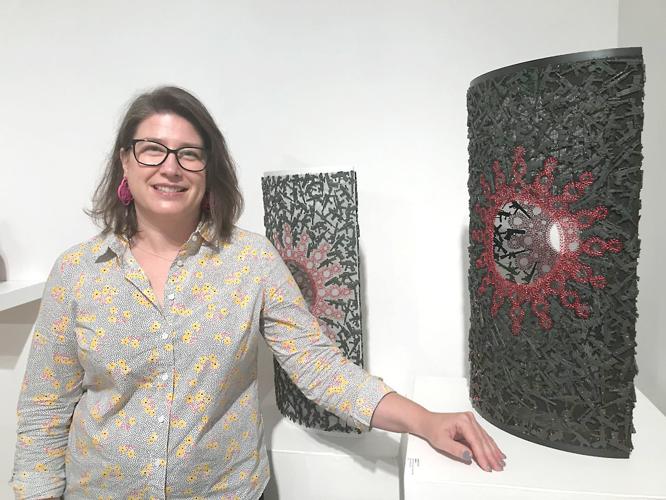 Lindsay Ketterer Gates stands by her pieces that are in the Touchstone staff exhibit. 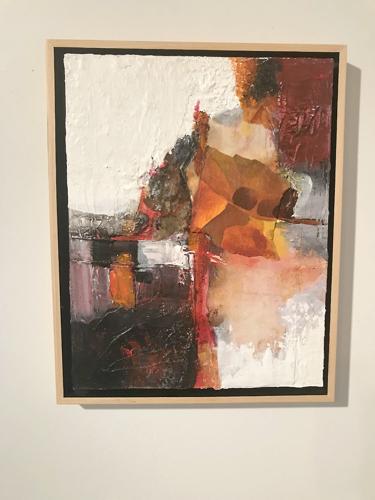 Above is a painting by Judith Musser that is currently on display in the Iron Gates Gallery at Touchstone Center for Crafts in Farmington. 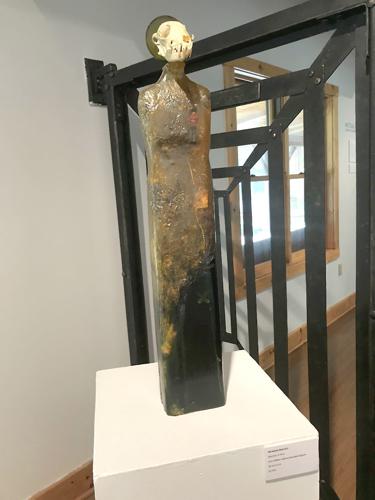 Above is a cast silicone sculpture by Adrienne Heinrich in the Iron Gates Gallery at Touchstone Center for Crafts in Farmington.

Stacy Larson shows off some of her work in the Touchstone staff exhibit.

Lindsay Ketterer Gates stands by her pieces that are in the Touchstone staff exhibit.

Above is a painting by Judith Musser that is currently on display in the Iron Gates Gallery at Touchstone Center for Crafts in Farmington.

Above is a cast silicone sculpture by Adrienne Heinrich in the Iron Gates Gallery at Touchstone Center for Crafts in Farmington.

Those looking to see, not one, but two amazing art exhibits close to home, can take a drive through the scenic Fayette County hills to the Touchstone Center for Crafts in Farmington where a staff exhibition as well as one featuring two artists with the Associated Artists of Pittsburgh (AAP) will be on display.

The exhibition “Mutual Understanding,” in the Iron Gate Gallery at Touchstone, is curated by Jennifer Panza and features the work of Associated Artists of Pittsburgh members Adrienne Heinrich and Judith Musser.

“Judith and Adrienne guide us through layers of feeling, memory and personal attachments, gravitating us further in thought and appreciation with their ingenious way of utilizing both grace and power in their execution,” said Panza in a press release. “I remain in awe of their talent and uniqueness.”

“Touchstone is thrilled to be hosting a second exhibition of work by AAP artists in our Iron Gate Gallery,” said Lindsay Ketterer Gates, Touchstone’s executive director. “We look forward to continuing to highlight work by the many talented artists in the Greater Pittsburgh region”

“We are very excited to work with Touchstone and Jen Panza to showcase the work of members Adrienne Heinrich and Judith Musser,” said AAP Executive Director Madeline Gent in the press release. “Jen has found thoughtful ways in which artworks complement one another. The show looks great in the space.”

Ketterer Gates said they’ve been working on building connections to different art organizations in the region and after talking with the Gent earlier this year, Ketterer Gates posed the idea of having exhibitions from artists in the AAP organization at Touchstone in order to broaden their reach and allow Touchstone to connect with more of their artists.

Over 60 artists applied to be included in the exhibitions.

Ketter Gates and Travis Winters, another Touchstone employee, selected a 2-D and 3-D artist for the two different exhibits.

“We were looking for work that would go well together and that had a cohesiveness and the work of Heinrich and Musser had some really interesting abstractions,” said Ketterer Gates.

Heinrich said that her sculptures, paintings and installations spring from her experience as a woman and a mother.

“I create in various media: reed with paper or fabric, carved wood and cast silicone,” she said. “I gravitate towards those materials which imply a sense of vulnerability and are difficult to control physically.

Heinrich added that light is an important aspect in her pieces.

Musser said the fact that she works standing at an easel affects how the work progresses.

“I step back and forth a lot to view the work form a distance,” she said. “This becomes a little dance I do with the canvas, and as the composition develops, I discover some intellectual or emotional connection.”

Colleen Hoesch, president of the board at Touchstone said she’s excited about the different partnerships that Touchstone is forming.

“Having reciprocal connections with different organizations helps everyone,” she said.

Ketterer Gates added that for the artist, exhibiting at Touchstone gets them away from the typical Pittsburgh area exhibits.

Some other partnerships they’ve formed include those with Rivers of Steel as well as MonMade. Powdermill Nature Reserve, which is a part of the Carnegie Museums, will also come to Touchstone for a week where their researchers will be involved in some workshops based on the nature that surrounds the Touchstone campus.

The other exhibition hosted by Touchstone in their Main Gallery is the staff exhibit, which is made up of works from Touchstone’s permanent and seasonal staff and seasonal interns.

Stacy Larson, originally from Minnesota, has worked at Touchstone for three seasons and has her pottery/ceramic pieces on display in the exhibit.

Ketterer Gates said their seasonal staff actually comes from all over, including Michigan, Washington and Kansas and their works being showcased in the staff exhibit include such mediums as blacksmithing, jewelry, wire, ceramics, mixed media and glass.

Both exhibits run through Sept. 30 and the galleries are open Thursday through Sunday from 10 a.m. to 4 p.m. or by appointment. All pieces in both exhibits are available for purchase.

Ketterer Gates said some upcoming activities at Touchstone include an alchemist picnic that will host its own pop up gallery on the weekend of Oct. 4 and 5 and their fall benefit event that will include zombies and an escape room at The Pittsburgh Field Club, 121 Field Club Road, Pittsburgh at 6:30 p.m. Oct. 18. Tickets are $150 per person and can be purchased online at touchstonecrafts.org. Visit the website to learn more about other date night events and workshops that are still planned through the end of the year.