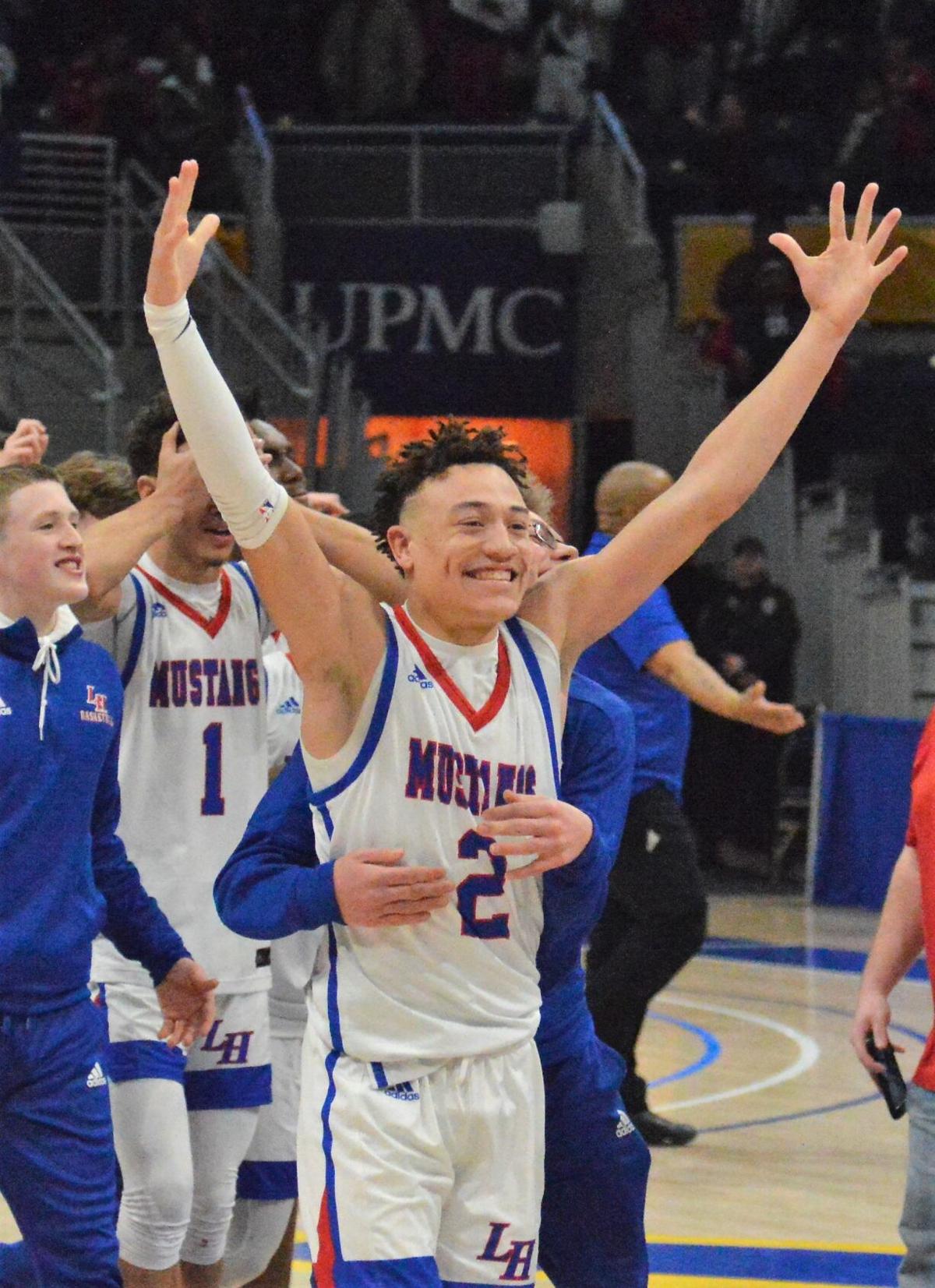 Freshman sensation Rodney Gallagher looks to the Laurel Highlands fans in the stands at the Petersen Events Center after leading the Mustangs to the WPIAL Class 5A boys basketball championship with a 52-51 victory over Mars on Feb. 28. 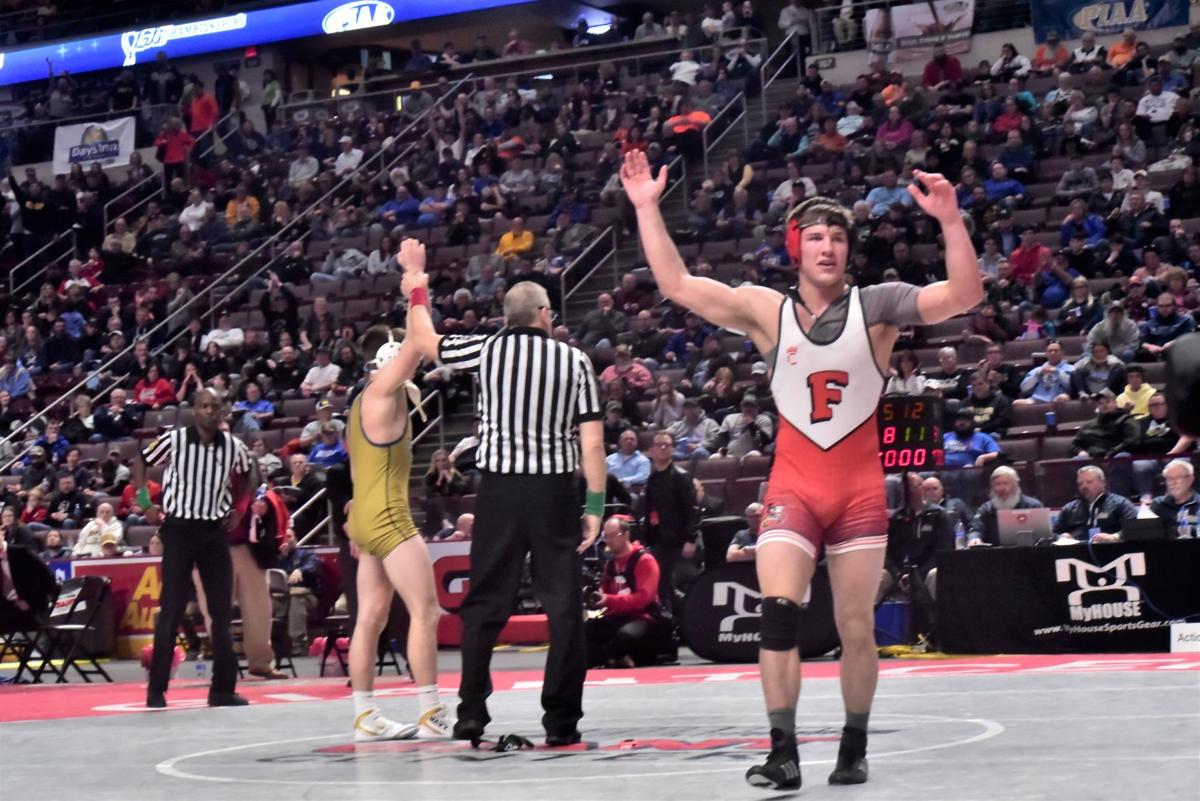 Frazier’s Thayne Lawrence reacts after Notre Dame-Green Pond’s Andrew Cerniglia has his hand raised following a controversial 11-8 decision in the 160-pound finals last season in the PIAA Class AA Championships at the Giant Center in Hershey. 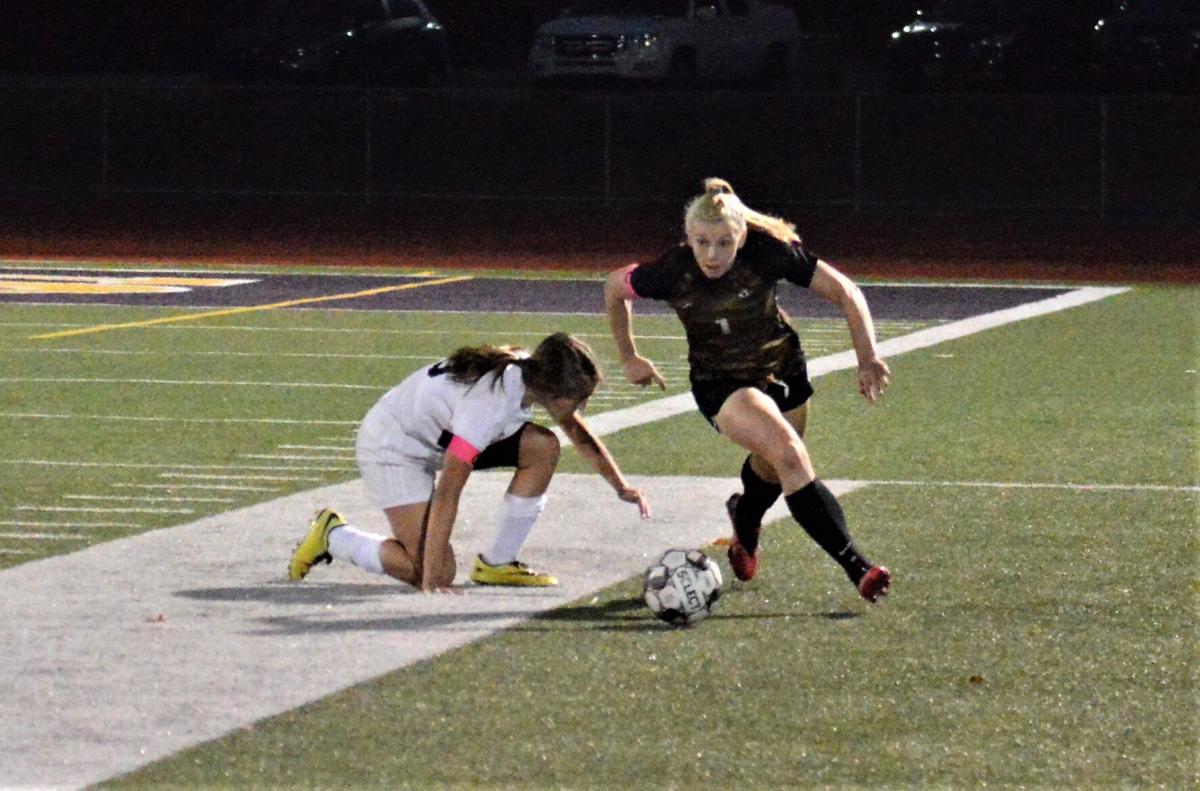 Brownsville’s Tessa Dellarose (1) leaves a South Allegheny player in her wake as she heads up field during a WPIAL Class 2A girls soccer playoff game at California High School on Oct. 27. 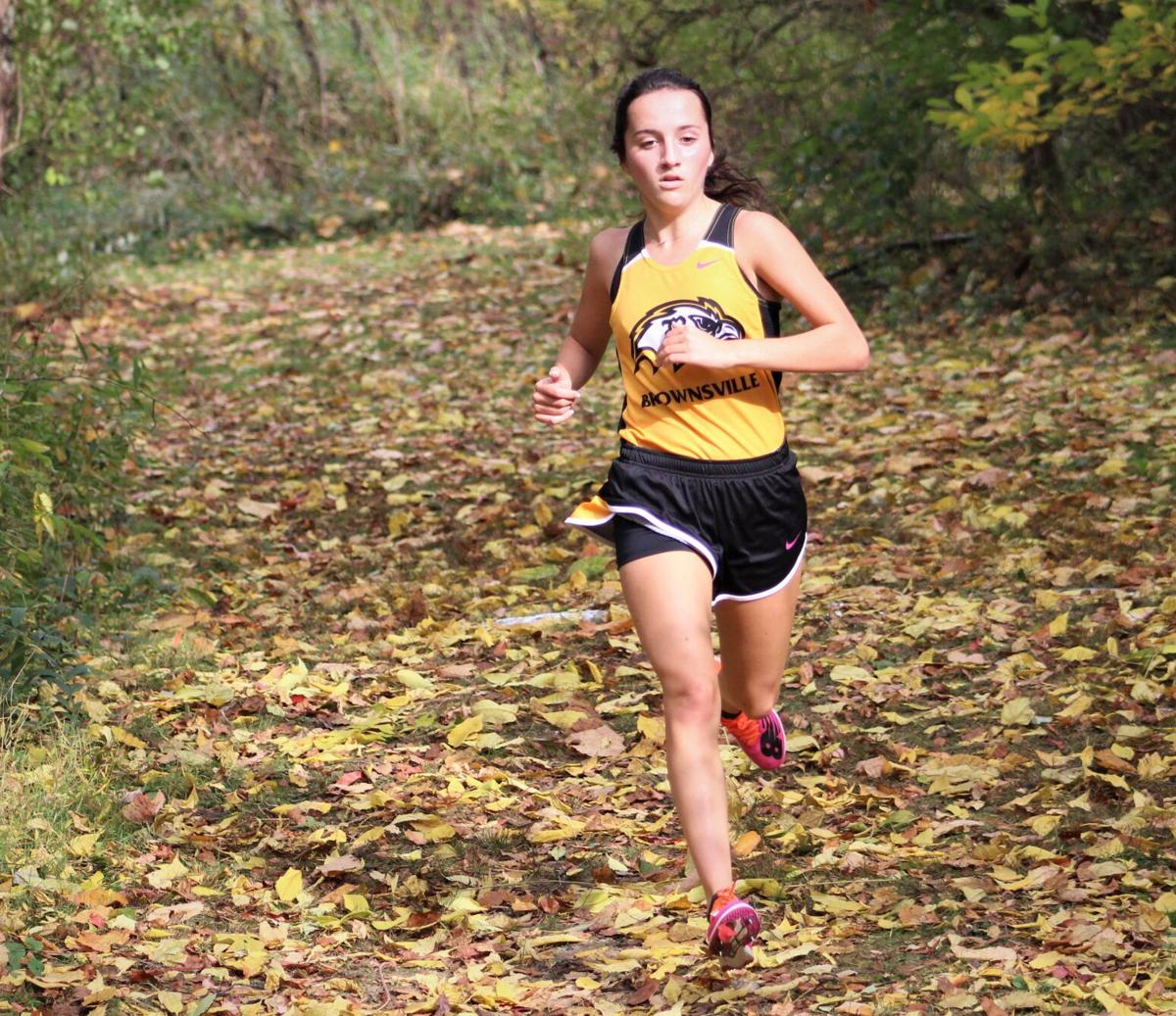 Brownsville’s Jolena Quarzo runs into the sun through the woods on Connellsville’s course during the FCCA Cross Country Championship on Oct. 15.

Freshman sensation Rodney Gallagher looks to the Laurel Highlands fans in the stands at the Petersen Events Center after leading the Mustangs to the WPIAL Class 5A boys basketball championship with a 52-51 victory over Mars on Feb. 28.

Frazier’s Thayne Lawrence reacts after Notre Dame-Green Pond’s Andrew Cerniglia has his hand raised following a controversial 11-8 decision in the 160-pound finals last season in the PIAA Class AA Championships at the Giant Center in Hershey.

Brownsville’s Tessa Dellarose (1) leaves a South Allegheny player in her wake as she heads up field during a WPIAL Class 2A girls soccer playoff game at California High School on Oct. 27.

Brownsville’s Jolena Quarzo runs into the sun through the woods on Connellsville’s course during the FCCA Cross Country Championship on Oct. 15.

The sports year that was 2020 will always be remembered for the coronavirus pandemic and the ravaging impact it had not only locally but across the world.

While COVID-19 dominated headlines, there were still memorable moments in area sports. Here’s a look at some of the top local sports stories of 2020:

Laurel Highlands welcomed a highly-touted freshman onto its boys basketball team and there were those who didn’t think Rodney Gallagher could come close to living up to all the hype surrounding him.

Gallagher not only matched those lofty expectations he surpassed them, leading the Mustangs on a magical run through the WPIAL Class 5A playoffs that ended with a 52-51 win over Mars in the championship game at the Petersen Events Center. Gallagher’s two free throws with 4.8 seconds left provided the difference.

It was more than just Gallagher, though. LH seniors Keandre Cook, Tyvaughn Long and Timmy Smith all had great moments in the postseason run, and junior forward Nick Egnot stepped into a refigured starting lineup when junior guard Caleb Palumbo was ineligible due to a transfer ruling and excelled.

Coach Rick Hauger balanced the arrival and development of Gallagher perfectly with his upperclassmen and made all the right moves in the playoffs to lead Laurel Highlands to its second district championship with the first coming in 1968.

Devin Whitlock showed off his amazing athletic ability on the gridiron and on the hardword for Belle Vernon.

As a sophomore during the 2020 WPIAL Class 4A boys basketball playoffs he keyed an improbable run by coach Joe Salvino’s Leopards to the district final where it fell to Highlands. The Leopards also won a game in the PIAA tournament before losing a heart-breaking, 84-82 quadruple overtime clash against Lancaster Catholic.

In football as a junior this fall, Whitlock earned all-state honors as a dangerous quarterback-defensive back-return specialist in sparking coach Matt Humbert’s Leopards to a share of the conference title and into the WPIAL semifinals where Belle Vernon lost to Aliquippa.

Frazier senior and Thayne Lawrence was seeking his third consecutive PIAA Class 2A wrestling gold medal when a controversial call cost him precious points and a shot at a possible pin in the 160-pound final.

Lawrence locked Notre Dame-Green Pond’s Andrew Cerniglia in a cradle late in the third period when inexplicably a stalemate was called and no near-fall points were awarded. Cerniglia survived to win an 11-8 decision but fans at the Giant Center in Hershey booed the decision and cheered loudly as Lawrence left the mat.

The Lehigh recruit ended his high school career with two state titles, a runner-up medal and one third-place medal.

Following in the footsteps of her record-breaking sister Gionna Quarzo, Brownsville sophomore Jolena Quarzo cruised to an easy victory in the WPIAL Class 2A Cross Country Championships this fall at White Oak Park.

Jolena, who finished second to Gionna in the 2019 final, went on to claim a silver medal in the PIAA championships.

Southmoreland and West Greene both put together perfect records in the regular season and advanced to the WPIAL final.

The Lady Scotties lost a key starter early in the season but, amazingly, still rolled to 25 straight wins before losing to top-seeded North Catholic in the Class 4A district final at the Petersen Events Center. Coach Brian Pritts’ squad, led by senior Sarah Pisula and freshman Olivia Cernuto, also won a PIAA playoff game and finished 25-2.

West Greene, under coach Jordan Watson, kept the Lady Pioneers’ machine rolling despite graduating a trio of 1,000-point scorers. West Greene set a school record with 24 wins, all in a row, and made its third straight appearance in the WPIAL Class 1A final, where it lost to Rochester. A first-round loss in the state tournament left West Greene with a 24-2 record. The Lady Pioneers extended their section winning streak to 45.

Waynesburg Central senior Wyatt Henson played an important factor in the Raiders march to a WPIAL Class 3A wrestling championship and a spot in team state final.

The Raiders, under coach Joe Throckmorton, edged Canon-McMillan, 31-30, in a tense district team final that was decided by 10th tiebreaker (nearfall points), then upended mighty Bethlehem Center, 33-31, in the PIAA semifinals, before being defeated by Nazereth in the final.

Zuzak and the Trojans

California senior running back Jaeden Zuzak took advantage of down time during the COVID-19 pandemic to work on preparing himself for his senior year and it paid off as he sparked coach Ed Woods’ Trojans to a perfect 6-0 season and the Tri-County South championship.

Baseball rises from the ashes

When the spring high school season was postponed it spoiled what had the makings of a stellar year for a Laurel Highlands baseball team that returned a stacked lineup and a rotation that included three strong lefties from a squad that reached the WPIAL final for the first time in 2019.

There were other teams that had envisioned breakthrough seasons, such as Albert Gallatin. The Fayette County Baseball League also was in jeopardy of not holding a season for the first time in decades.

But baseball returned in the summer and gave local players at least a taste of a season.

Laurel Highlands entered its team into the HARC Teener League and obliterated the competition in going 10-0 to win the league title while out-scoring opponents 106-11.

FCBL commissioner Ryan Encapera, with help from Dickie Krause, made sure their league survived the pandemic by adhering to safety measures during a season that saw upstart Masontown defeat Mitch’s Bail Bonds in the best-of-three final.

Elizabeth Forward, under coach Mike Collodi, put together its greatest football season, going undefeated in the regular season and advancing to its first ever WPIAL championship game, where it lost to eventual state champion Central Valley. Bowling Green recruit and all-state player Chase Whatton led the way for EF.

Adena Rugola continued to emulate older sister Danae Rugola, currently at Youngstown State, by leading Uniontown’s boys golf team to a section title. The Red Raiders advanced to the WPIAL Class 3A team semifinals. Rugola, who battled back from offseason shoulder surgery, was medalist at the Section 2-AAA qualifier and tied for 13th in the WPIAL individual championship.

Brownsville’s Tessa Dellarose began the year by representing her country on the United States Under-16 National Team in England and closed it by again leading the Lady Falcons into the postseason where it advanced to the WPIAL quarterfinals, earning all-state honors along the way.

Dellarose, a North Carolina recruit, scored 33 goals in her junior season and became only the second Brownsville player to reach 100 career goals. She will enter her senior season with 108 goals and 57 assists.

Laurel Highlands and Waynesburg Central earned section titles and Frazier improved throughout the season during a fruitful volleyball season for local teams.

Coach Dan Higinbotham took the Lady Raiders to where they had never gone before, advancing to the WPIAL semifinals after winning an outright section crown. Senior Emma Robinson, who was named to the all-state team, led the way for Waynesburg.

Coach Mandy Hartman inherited a Frazier team that was ravaged by graduation but the Lady Commodores, led by all-state sophomore Jensyn Hartman, won two playoff matches, including an upset of Deer Lakes, to reach the quarterfinals.

Connellsville’s girls soccer team rolled to the Section 2-AAA championship in a most impressive fashion. Not only did coach Jeff Puskar’s squad run the table in section play, it amazingly didn’t allow a single goal.

The Lady Falcons were upended in the first round of the playoffs to finish the season 11-1 but return a majority of their team for 2021, including star junior Mary Kate Lape.

Albert Gallatin’s football team, under third-year coach Drew Dindl, went 5-1 and piled up 10 wins in the last two seasons, easily the best stretch in the program’s history. ... Ryan Michaels became the first Elizabeth Forward wrestler to reach a PIAA final ... Southmoreland won a section title and playoff game in girls soccer. ... Yough’s girls soccer team advanced to the WPIAL semifinals, taking out top-seeded South Park along the way. ... Eben McIntyre led the WPIAL in scoring with 43 goals while helping Charleroi’s boys soccer team win a section crown. ... Geibel Catholic’s Claire Konieczny, Jefferson-Morgan’s Kyle Clayton and Bullskin Township natives Meghan Zambruno and Ella Zambruno of GCC each qualified for the PIAA golf championships. ... Belle Vernon sophomore Patrick Bush won the FCCA Boys Golf individual title. ... Uniontown’s Hope Trimmer finished third in the WPIAL Cross Country Championships and 10th in the PIAA. ... Freshman Ryan Pajak sparked Ringgold to a boys cross country section title and finished second in the WPIAL and ninth in the PIAA. His older brother Lucas Pajak and teammate Ben Daerr finished sixth and seventh in the WPIAL. ... Grace Henderson was Belle Vernon’s top girls cross country runner with aspirations of a WPIAL medal and the starting goalkeeper on the Lady Leopards’ soccer team, which qualified for the WPIAL playoffs. An injury, however, kept her out of the district cross country event and the soccer postseason, where the Lady Leopards fell in a first-round shootout to Oakland Catholic. ... Connellsville senior running back Ky’ron Craggette was named to two all-state football teams. ... Belle Vernon and Elizabeth Forward won boys soccer section titles. ... Charleroi’s boys basketball team won a section title. ... Phil Pergola wrapped up his 55th and final season as a basketball coach by leading Ringgold into the playoffs where the Rams defeated Ambridge to qualify for the PIAA tournament. Pergola, who led Ringgold to the 1995 PIAA championship, finished with 640 wins. ... Geibel Catholic earned its first WPIAL boys basketball playoff win since 2005. The Gators, coached by Don Porter and led by senior 1,000-point scorer Enzo Fetsko, beat Leachburg and qualified for the state tournament.