You are the owner of this article.
Edit Article Add New Article
News
Obituaries
Calendar
Classifieds
Sports
Opinion
Greene County Fair
About Us
Homes
Subscribe
1 of 3 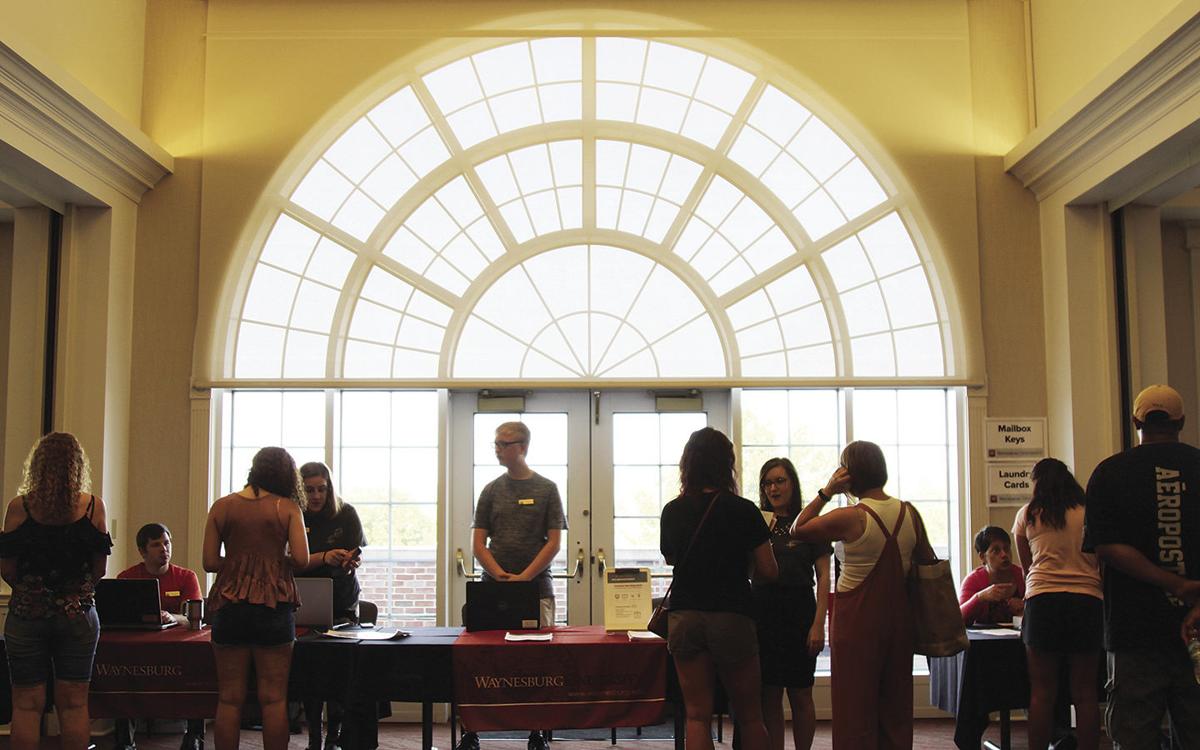 Members of the 2019 freshman class check in at Waynesburg University’s Stover Campus Center. This class consists of around 400, the school’s average class size, with students representing 57 concentrations. (Photos by Samantha Karam) 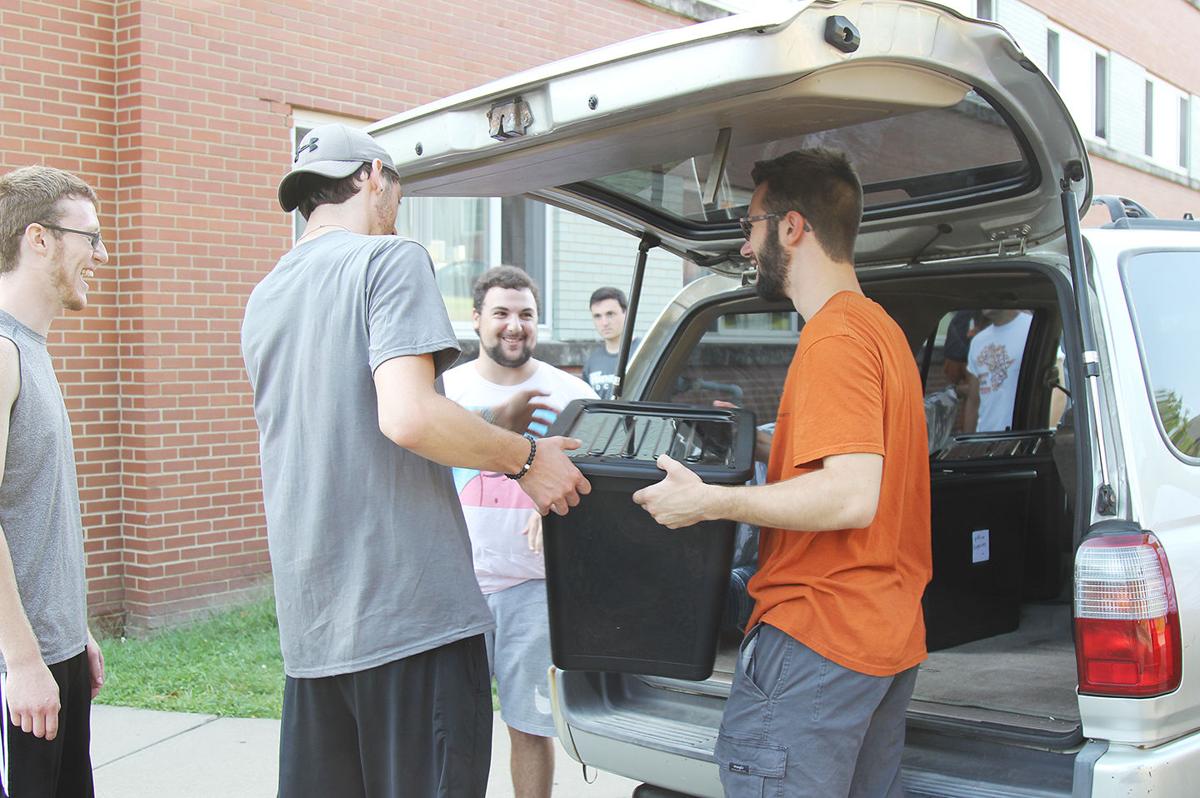 A scene from outside Thayer Hall, which, according to the university’s website, is an all freshmen boys’ dorm. The university has five traditional dorms, two male and three female, and two apartment-style dorms. 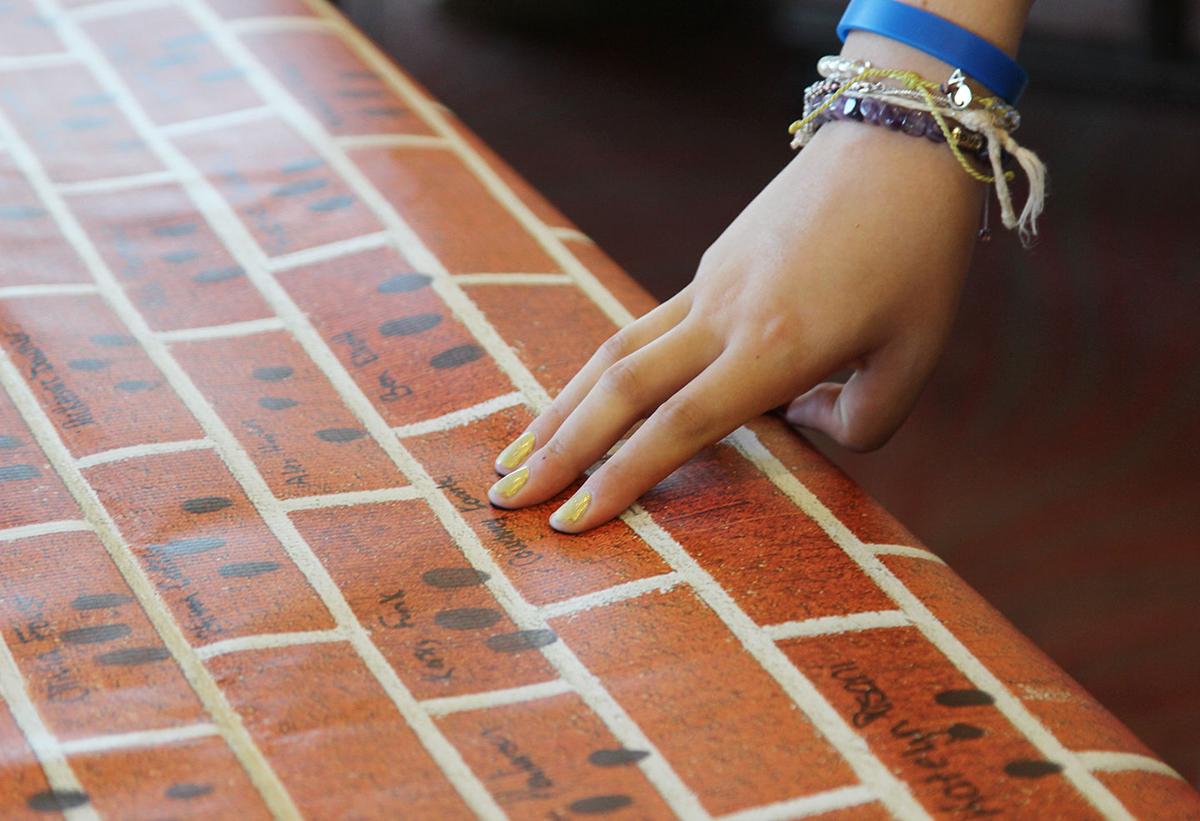 According to Matt Stultz, the school’s corporate relations and communications specialist, it is a tradition for each incoming class to fingerprint a faux-brick banner. This is reminiscent of the students who placed their fingerprints on the bricks of Miller Hall after they helped build it.

Members of the 2019 freshman class check in at Waynesburg University’s Stover Campus Center. This class consists of around 400, the school’s average class size, with students representing 57 concentrations. (Photos by Samantha Karam)

A scene from outside Thayer Hall, which, according to the university’s website, is an all freshmen boys’ dorm. The university has five traditional dorms, two male and three female, and two apartment-style dorms.

According to Matt Stultz, the school’s corporate relations and communications specialist, it is a tradition for each incoming class to fingerprint a faux-brick banner. This is reminiscent of the students who placed their fingerprints on the bricks of Miller Hall after they helped build it.

Thursday, Aug. 22, was move-in day at Waynesburg University. Although some areas of campus were serene, residence halls were bustling with students and parents going up and down stairs and trying to get everything organized… or at least out of cars and into rooms.

According to the university’s website, the campus has five traditional dorms, two male and three female. Thayer and Burns Halls have one floor in each building dedicated to male and female freshmen, respectively. The campus also offers two apartment-styled dorms, which typically house older students.

Nathan Grella’s dorm, Thayer Hall, was full of people. His parents and younger brother traveled with him from State College, as did his roommate, Nick Haushalter, and his family. It was the boys’ first day – actually, their first hour – as members of Waynesburg University’s Class of 2023.

For Grella’s parents, Chris and Angie, Nathan is their first of two sons and the reality of him entering university hadn’t fully sunk in.

“It doesn’t feel real yet,” Angie said as she took a break from unpacking. “I guess after a week or two it’ll set in.”

“It’ll be weird not having him home,” Joshua said.

Living by himself away from home is a new experience, but many of the other parts of Grella’s college life will be familiar. First of all, his roommate is a friend from high school. The two spent the last year talking nonstop, mainly about football and mostly for work.

For Grella, who will major in sports information/athletic communications, the main goal with the degree is to expand his knowledge and connect it to the experience he already has. Alongside that, he hopes to grow in his faith, something he is happy Waynesburg University can help him with.

Waynesburg University has a student to faculty ratio of 13 to 1, the school’s website states. The average class size is 16.

According to Matt Stultz, the school’s corporate relations and communications specialist, this class of incoming freshman are of average size, about 400 students. Waynesburg University’s Class of 2023 represents 57 concentrations.

Grella is also looking forward to meeting new people, something that will likely happen very soon with all the events planned for orientation week.

Even with the need to process some more, one thing is clear: the Grellas are proud.

“There’s excitement and being proud of him for all he’s accomplished so far,” Angie said.

Across campus from Thayer, Lyndel Spiker of Gibbon Glade was feeling all sorts of emotions as her only child, Abigail, moved into Burns Hall.

“I’m excited, I’m nervous,” Lyndel said. “I watched over her for 18 years. I don’t know who will watch over her for the four years she’s here.”

Abigail refers to her hometown as “in the middle of nowhere in the Farmington area” because, according to her, no one would know if she said the actual name.

Due to growing up in a small town, she is excited to meet new people and explore Waynesburg University’s campus and beyond. She has already done a little bit of the former by reaching out to another student who is now moving in to the room directly across from her.

“We were actually talking on Facebook a little bit, just getting to know each other, so I know one person,” she said. Spiker actually knows two people: Her now roommate, Emily Sarver, is her best friend, but that’s old news for her.

Inside the girls’ new room, their parents helped them get settled. The move is new for Lyndel, as well. Ashley is an only child and the first person in her immediate family to go to college. Two of Lyndel’s nieces attended college, but “it’s been sporadic,” she said. It’s been a decade since Lyndel’s niece graduated.

Even with a decade of difference, Ashley talked to her cousin to find out what to expect and got some good advice.

“They told me to just go for whatever I dreamed, so it helped,” she said.

A pre-med biology student, her plan right now is to learn as much as she can and work toward her degree. Spiker said she wants to go into either hematology or oncology.

“I gave her the choice,” Lyndel said of her daughter pursuing higher education. “I do well and I told her she can do whatever she wants.”

Spiker still has time to decide, right now she is ready to enjoy something she is sure about: Waynesburg University. She said her initial plans were to attend West Virginia University, but changed her mind during a trip to campus.

“I went there and I was like, ‘This is awful.’ I love the small classes here, the bigger classes they just give me anxiety,” she said.

At WU, however, Spiker talked to a professor whom she described as “the greatest person,” which helped her make a decision.

“It was just a really good fit,” she said.

Lyndel said she will miss Ashley most during the evenings because her daughter usually worked or had school during the day.

“It’s a positive experience,” Lyndel said. “(By attending college, Ashley is) getting closer to what she wants to be.”

The university’s homecoming weekend is Oct. 4-6. For more information and a schedule of events, visit www.waynesburgunited.com.