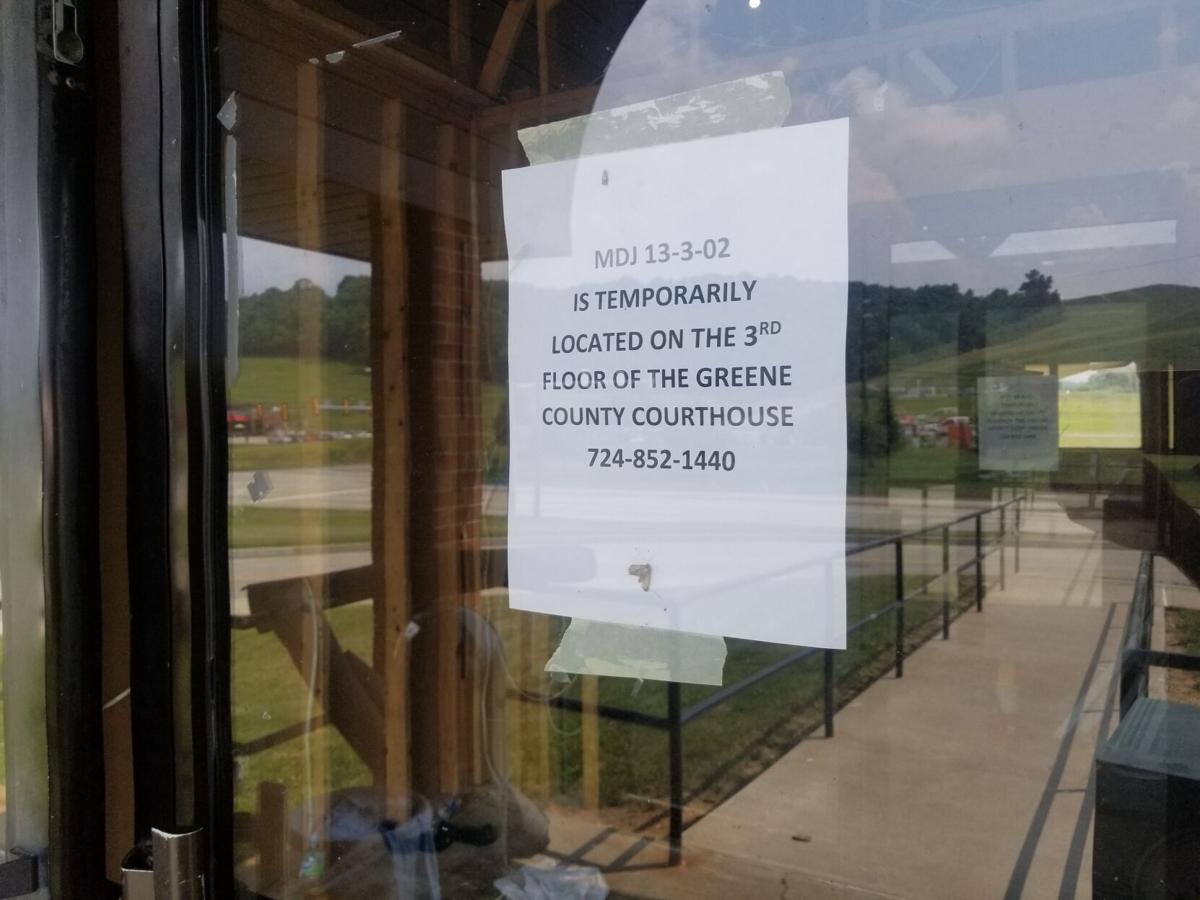 A sign on the front door of the Greene County Airport’s administrative building announces that the magisterial office for District Judge Glenn Bates has been moved to the Greene County Courthouse after a March 24 fire damaged the building. (Photo by Mike Jones) 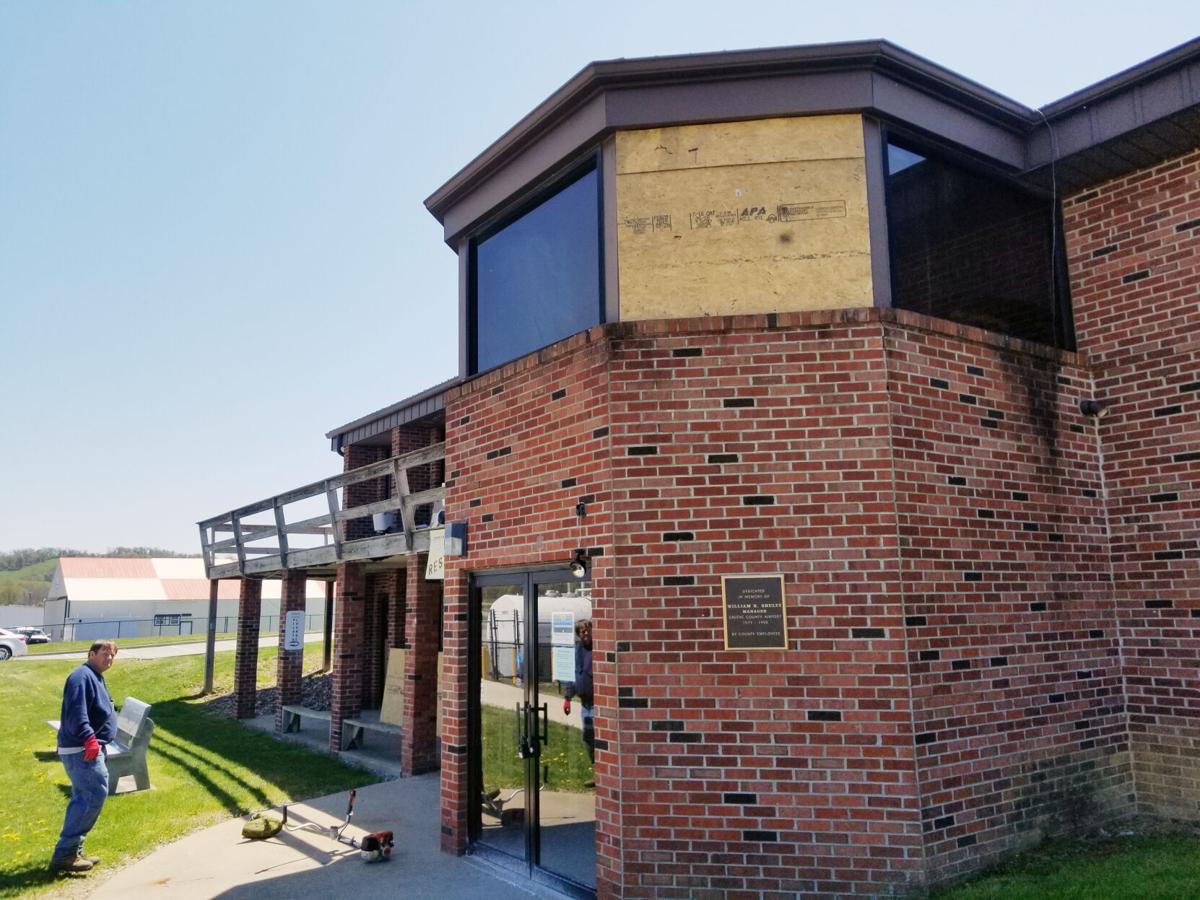 A sign on the front door of the Greene County Airport’s administrative building announces that the magisterial office for District Judge Glenn Bates has been moved to the Greene County Courthouse after a March 24 fire damaged the building. (Photo by Mike Jones)

Shortly after the March 24 fire inside the Greene County Airport’s radio room caused smoke and water damage to the administrative building, there was hope that the local magistrate’s office and popular diner could return relatively soon.

Initial estimates indicated it could take a couple of months to repair the interior and upgrade the electrical and climate control systems to modern standards, but that work has proven to be more extensive than originally thought.

That has left District Judge Glenn Bates in a lurch after the magistrate’s courtroom and offices were relocated to the Greene County Courthouse’s third floor, creating scheduling conflicts for what was only meant to be a temporary solution.

The auxiliary courtroom that Bates uses is sometimes occupied by visiting senior judges, or it’s scheduled for custody or dependency hearings, forcing him to hold some traffic and summary cases in his temporary office with the participants huddled around him.

“I appreciate everyone trying to accommodate us. But there are several different people sharing this courtroom, so scheduling is a problem,” Bates said. “It’s just not the same as having your own office.”

The demolition of ductwork, drywall, ceiling tiles and anything else damaged during the fire inside the airport administration building was completed relatively quickly, but Greene County Chief Clerk Jeff Marshall said they’re still reviewing everything that must be done to get the structure up to code.

Marshall previously said the county has urged the contractor to focus on repairing the magistrate’s office and diner so those two can return to the location on Route 21 in Franklin Township as quickly as possible.

Marshall spoke to Bates several weeks ago to update him on the progress, and county officials are now hoping to reopen the building in the fall.

“I think everyone thought it would be done in a couple of months,” Marshall said. “It’s taking longer than we thought due to the extensive updates to the electrical and HVAC.”

Bates said there have been discussions about finding a new location if the renovations are delayed even longer, but there are potential issues with short-term leases or private landlords who do not want their buildings to be reconfigured to hold a courtroom and offices.

“Believe me, we have been looking, but we just haven’t found a place that can accommodate us,” Bates said. “The county is trying. I’ll give them full credit for that. It’s just hard to find.”

He praised Greene County Court Administrator Sheila Rode for working to schedule the cases in a manner that is the least disruptive, but he acknowledged she has a “difficult job” to find space for everyone who needs the small courtroom for hearings or cases.

“Sheila is stuck in the middle trying to keep everybody happy and make sure everybody gets serviced the way they should be,” Bates said. “It’s nobody’s fault. It’s trying to accommodate a lot of people using one space.”

Rode said there was a “smooth transition” moving Bates and his staff into the third-floor courtroom and adjacent office after the fire, but the length of time coupled with an increase in cases as COVID-19 safety protocols are eased is now causing issues.

The state police fire marshal ruled the fire an accident and said it began through “spontaneous heating” of cleaning rags covered in chemicals left in the radio room, which was being used at the time for storage.

The fire was confined to the airport’s radio room, but smoke damaged other sections of the building. The cost to repair the building is not known since the scope of the work has not been finalized.