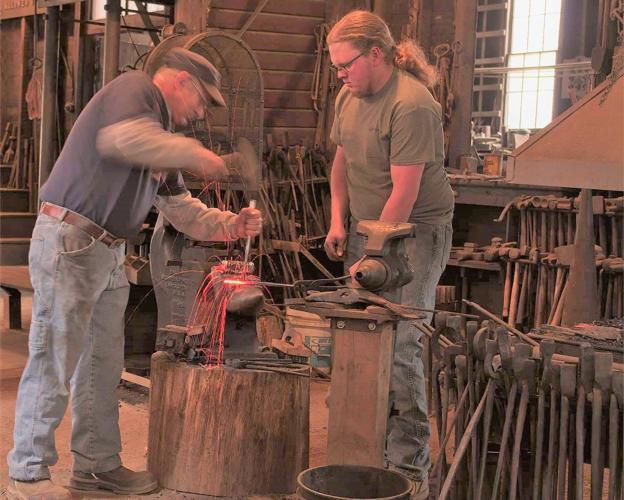 Gary Shriver of Spraggs (left) and Noah Bass of Waynesburg demonstrate blacksmithing at the W.A. Young and Sons Foundry and Machine Shop in Rices Landing. (Photo courtesy of Gary Shriver) 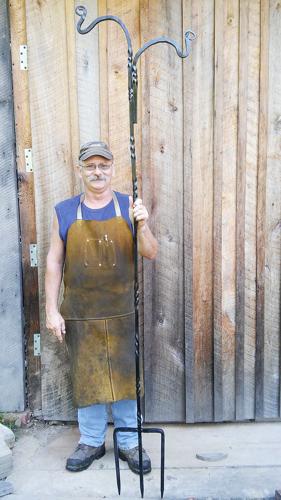 Gary Shriver shows off a shepard’s hook he recently made for a customer. He said the piece, which is seven feet tall, is used to hang flower pots. (Photo courtesy of Gary Shriver) 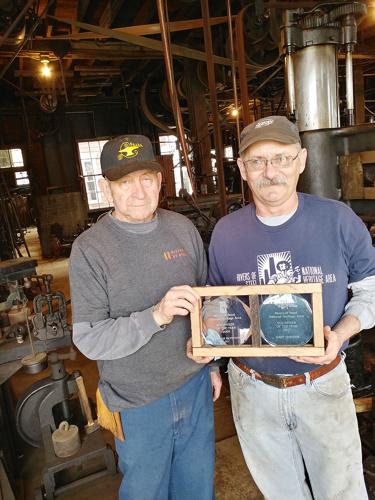 George “Bly” Blystone (left) and Gary Shriver pose with their awards for their voluunteer work at the foundry. (Photo courtesy of Gary Shriver)

Gary Shriver of Spraggs (left) and Noah Bass of Waynesburg demonstrate blacksmithing at the W.A. Young and Sons Foundry and Machine Shop in Rices Landing. (Photo courtesy of Gary Shriver)

Gary Shriver shows off a shepard’s hook he recently made for a customer. He said the piece, which is seven feet tall, is used to hang flower pots. (Photo courtesy of Gary Shriver)

George “Bly” Blystone (left) and Gary Shriver pose with their awards for their voluunteer work at the foundry. (Photo courtesy of Gary Shriver)

It took Gary Shriver of Spraggs quite a while to get bitten by the blacksmith bug, but once a veteran blacksmith, Tim Schiffbauer, showed him a thing or two about the once vital profession, Shriver took to it like a duck to water, or rather, like a hammer to an anvil.

While at the annual Hammer-In Festival in Rices Landing five years ago, Shriver said he learned “a few things” by watching Schiffbauer, past president of the American Blacksmith Association from Morgantown.

A year after his initial introduction to the craft, Shriver said he picked up things largely by himself after borrowing a friend’s forge and anvil. Since then, he’s bought two forges and four anvils of his own, equipment he uses at home to make things like shepherd hooks and fireplace pokers. He also takes his creations to festivals where he performs demonstrations.

“I’ve been doing it four years,” Shriver said. “And I just hammer on.”

On Saturday April 20, Shriver will join at least six other blacksmiths to show off their skills at the 31st Annual Hammer-In Festival at the W.A. Young and Sons Foundry and Machine Shop in Rices Landing. The event is free of charge, as is parking.

Throughout the day, foundry caretaker, George (Bly) Blystone will start up the machinery in the building for those in attendance and maybe even make a thing or two, just like in the old days. Those who get hungry at the festival can purchase food sold by Boy Scout Troop 1168 of Rices Landing.

Expected to join in on the festivities are demonstrators Barry Hixson of Lemont Furnace, Wayne Kelley of Ruffsdale, Ed Appleby of Laughlintown, John Elder of North Huntington and Rex Baughman of Greensburg.

Directions to the machine shop and foundry, located at 114 Water Street in Rices Landing, will be marked by wooden, anvil-shaped signs with arrows pointing the way.

A woodworker for about 30 years, Shriver said he’s made everything from oversized salad bowls to porch swings. He had been getting “kind of burned out” working with wood when he started blacksmithing.

“I really like swinging a hammer,” he said. “For starters, in woodworking, if you cut a board too short, you have to go get another one, but if you make a mistake blacksmithing, you just heat up the forge and start over.”

Shriver said he’s made a lot of items blacksmithing, but oddly enough he’s never made a horseshoe, something that had been the meat and potatoes of blacksmiths of yore. A woman from eastern Pennsylvania who attended a past Hammer-In recently brought him a bag of horse shoes and asked him to make horse head figures from them. They’re now waiting for her return for pick up at the foundry in Rices Landing.

While perfecting his craft, Shriver said he makes a lot of mistakes at home so he can go out to festivals and look like he knows what he’s doing. Now retired, he said he has the time to learn his trade on the Internet and at festivals where he keeps a close eye on the techniques of other “smithies”. At home, he said he spends more time on blacksmithing in the summer and does more woodworking in the winter.

Shepherd hooks and fireplace pokers are his favorite things to make out of metal, he said, and he doesn’t enjoy making knives.

“You have to heat, pound and quench the metal in oil, then put it in an oven to harden and anneal,” he said. “It’s a long process and you have to use hard carbon steel.”

One thing to look out for at this year’s Hammer-In Festival is when Shriver teams up with Schiffbauer and the pair swing hammers alternately, in tandem, one after the other, on the anvil.

“It’s crazy to watch two people swing quickly and in sync to turn metal really fast,” Shriver said. “People seem to be amazed when they watch us go at it. “

At the Hammer-In Festival, the demonstrations will start around 9 a.m. and continue throughout the afternoon. The blacksmiths will pound out items, such as ornamental hooks, trivets and elements for railings, doors and gates, much of which will be for sale. Many blacksmiths will bring along crafted items that will be auctioned off at 1 p.m., along with duplicates of things from the foundry and machine shop.

“The money raised at the auction will be donated to help support the Young Foundry and Machine Shop,” said Chris Holt, a female blacksmith and member of the Pittsburgh Area Artist-Blacksmiths Association (PAABA). “What’s nice about the auction is that people can meet the blacksmiths who made the items up for bid.”

Auction buyers should keep in mind the purchases need to be cash-only and that no credit cards will be accepted. Auction items cost anywhere from $10 to over $100.

“Many of the things the blacksmiths make are gift-type purchases that are perfect for occasions like Easter, Mother’s Day, birthdays, house warmings and more,” Holt said.

Holt got into blacksmithing years ago while a teacher at what was then the all boys Seweckly Academy. When the school decided to go co-ed, Holt decided to see what it would feel like to be a female in a male dominated class. She enrolled in a blacksmithing course at the Touchstone Center for Crafts in Farmington.

“I found it very welcoming and fascinating and a wonderful experience, so I continued to take more classes,” she said. “After meeting people in the PAABA, I became a member and am now very active in the association. We are very community-oriented and the sales from the auction will go toward supporting the foundry.”

The current PAABA membership is around 275 blacksmiths or those interested in smithing. Members are both male and female and range from the teens to those in their 80s. Meetings are held about nine times a year at various places all over Southwestern Pennsylvania, and the association’s stated goal is to keep blacksmithing alive for both the hobbyist and the professional.

“Owned and operated by the Rivers of Steel National Heritage Area, the W.A. Young and Sons Foundry and Machine Shop is a prime example of America’s industrial heritage,” the foundry’s site states. “All of the equipment dates from 1870 to 1920. An intricate system of belts and pulleys throughout the shop runs 25 pieces of machinery, each independent of the other and fully operational powered by one motor. The motor was originally a 12-horsepower steam engine which was followed by a 20-horsepower electric engine, and finally replace by a 20-horsepower gasoline engine.”