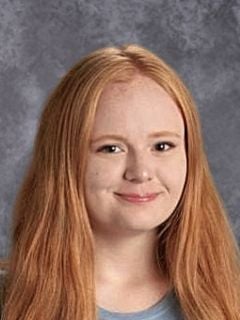 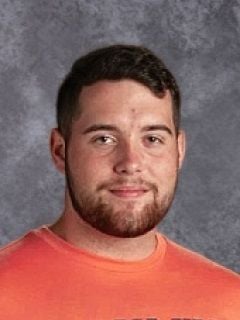 The Lions Club students of the month are Joy Heisey and Tyee McMaster.

Heisey is the daughter of Andrew and Deborah Heisey of Mount Morris. She has earned a 4.0 GPA throughout her time at Waynesburg Central High School, where she has participated in the Drama Club, Student Council, the Prom Committee, the Art Club and the concert and marching bands.

She attends the CMA Church of Morgantown and participates in the church’s youth group.

Heisey is a student of fine arts. She loves to paint and perform in theater. She has been taking art classes at the Waynesburg University Fine Arts Academy, and, through her artistic skills, has earned two gold keys, one silver key and nine merit awards from the Scholastic Art and Writing Competition. She recently constructed a giant goldfish out of Goldfish Crackers, which is on display in the WCHS art room. She plans to submit it in the Scholastic Art Competition.

Outside of school, Heisey works at Plato’s Closet and as a camp counselor at Greene County Summer Day Camp.

Her future plans are to attend college and major in communications. She wants to obtain a minor and pursue a career in the arts.

McMaster is the son of Dennis and Chris McMaster of Waynesburg. He has carried a 4.0 GPA into his senior year at WCHS. He is very interested in politics. At WCHS he is the Student Council President, the President of the National Honor Society and the president of the Future Business Leaders of America. He is also a member of the golf team and physics club.

Through his work with the FBLA, his teams have twice been regional champions. They also placed fourth at state and national competitions. McMaster has also twice been nominated to the Cinderella Ball Court.

Outside of school, he enjoys playing tennis. He works at a beer distributor and bales hay in the summertime.

His future plans are to attend Cornell University or the University of Pennsylvania and major in economics and statistics. He plans to become a financial analyst.