Log In Sign Up
You are the owner of this article.
Edit Article Add New Article
You have permission to edit this article.
Edit
News
Obituaries
Calendar
Classifieds
Sports
Opinion
Greene County Fair
About Us
Homes
Subscribe
e-Edition
1 of 5 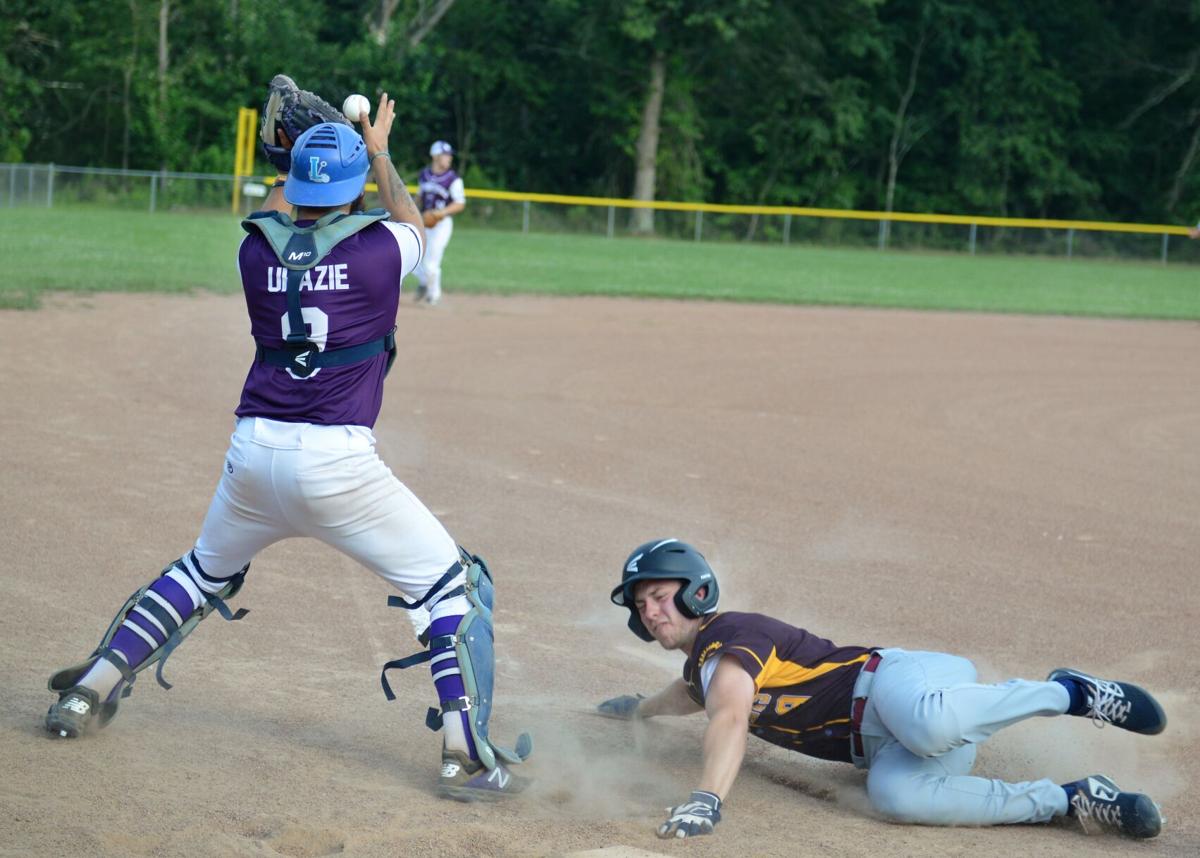 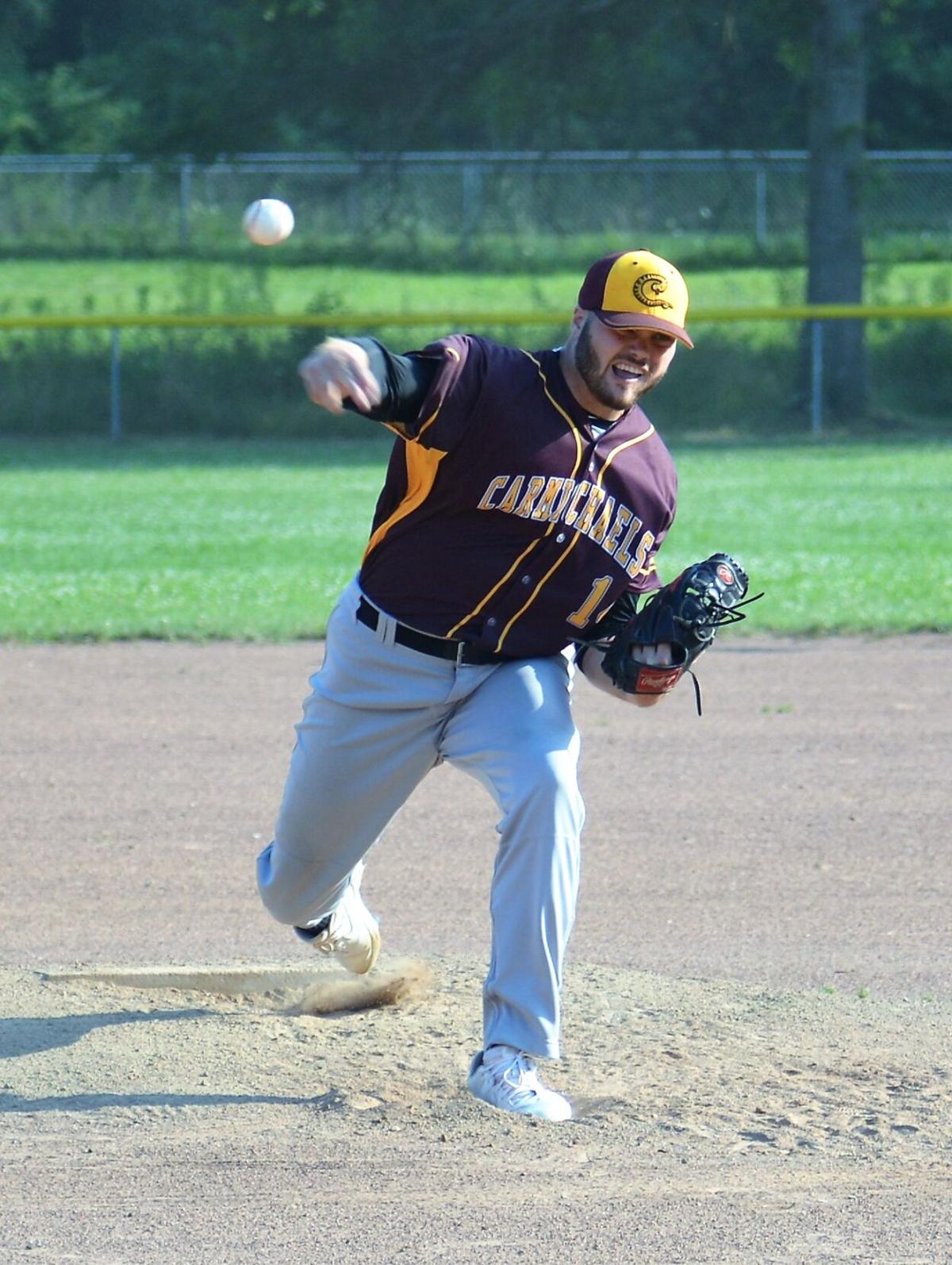 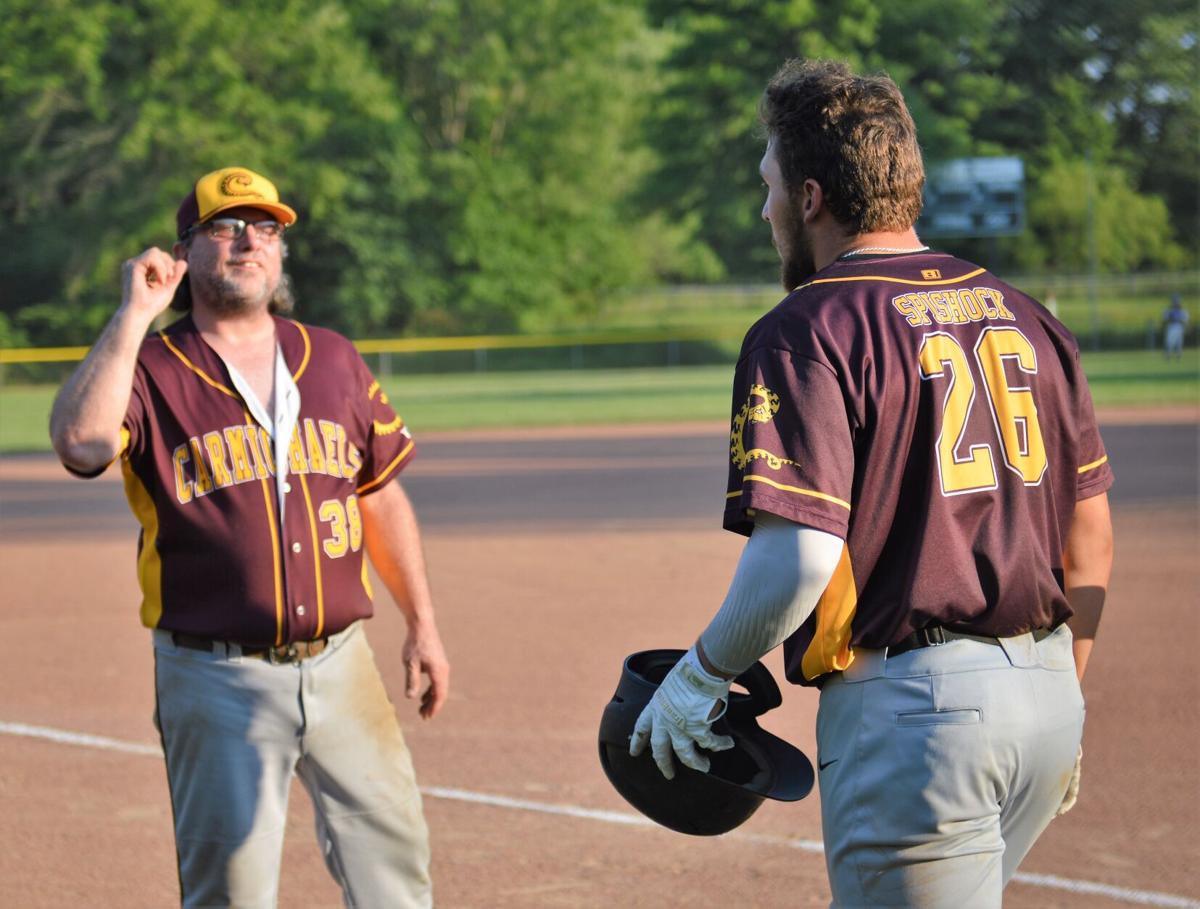 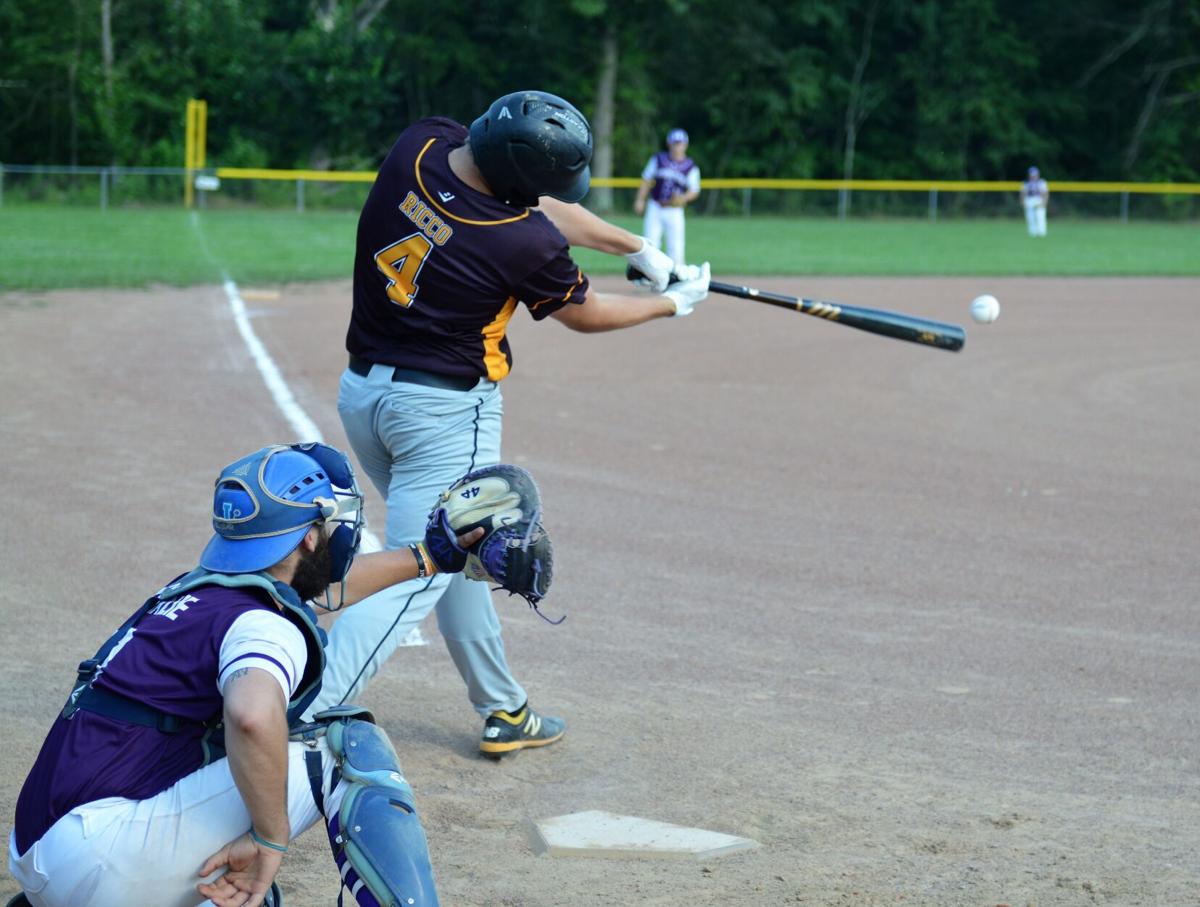 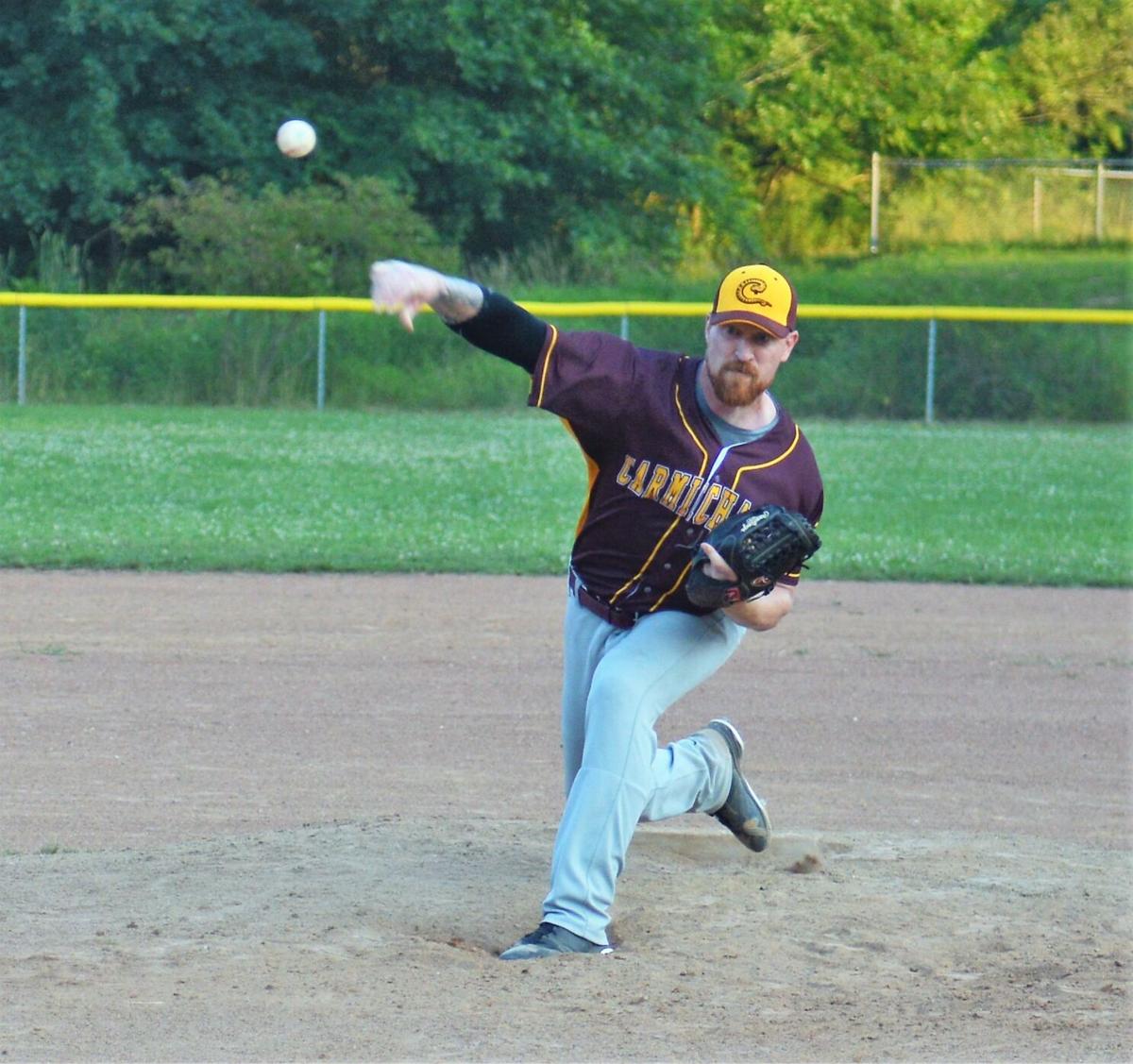 MASONTOWN — Masontown entered its first season in the Fayette County Baseball League last year as a loose team with nothing to lose.

They wound up winning the league title in that inaugural campaign.

The 2021 regular season turned out to be much different but, even so, Masontown finds itself in position to repeat as champions after a come-from-behind 5-3 win over Carmichaels on Monday at German-Masontown Park.

Masontown battled back for the second day in a row to win the best-of-three semifinal playoff series, 2-0. They will play either Mill Run or Mitch’s Bail Bonds in the best-of-five league final beginning on Thursday. That series was tied 1-1 going into Game 3 on Tuesday night.

Masontown trailed the Copperheads 3-1 before rallying in the bottom of the fifth, parlaying a walk, a hit batter, a balk, an error, singles by Mike Coll and Colby Simmons and a sacrifice fly by Reed Long into four runs.

That was enough for winning pitcher Willie Palmer who survived a rocky start to give Masontown its second straight complete-game performance in the postseason following Zach Uhazie on Sunday.

“They will fight from start to finish,” Masontown manager John Palmer said of his squad. “They’ve got heart. They’ve been through it last year so they know what to do this year.”

Winning tight games was something his team did not do well during the regular season, Palmer pointed out.

“There was a bullseye on our chest and that put a little bit more pressure on us this year,” Palmer said. “Last year was different. We were the new team, we were underdogs, they were having run. We won all the close games we were in.

“This year around midseason I could see them feeling the pressure, feeling tense. We were losing those close games. We lost one game 1-0 where our pitcher threw a no-hitter. So I had a meeting with them and said we’ve got to get back to Masontown baseball, have fun with it, relax, go out there and do what you do. We started coming together after that and went on a winning streak.”

The close games have now gone Masontown’s way in the first two games of the postseason. They won Game 1 on Sunday in Carmichaels, 6-5, after falling behind three times.

“I told them when the playoffs started this is a new season and we’ve got to start winning the close games. So far we’ve done that.”

Carmichaels put the defending champs back on their heels with an explosive first inning in taking a 2-0 lead.

“We wanted to get a quick start on them,” Copperheads manager Dickie Krause said. “But we weren’t able to add much. We didn’t have the closing ability.”

“They came out hitting today,” Willie Palmer said. “They’ve got some good ballplayers. I couldn’t blow it past them. So you’ve got to get more ground balls, let your defense play for you. I tried to keep the ball a little lower after that.”

“They had their backs against the wall and that’s a good-hitting team,” manager Palmer said. “They came out and they put the bat on the ball. I have a ton of respect for Carmichaels and Dickie and that whole staff. Every time you play them you’re in a dogfight. So I expected that from them today.

“We just had to stay mentally and physically strong and not lose focus after that.”

Palmer settled down and allowed only one more run on three hits the rest of the way. The right-hander retired 10 of 11 batters from the first through the fourth innings before allowing a solo homer to Spishock in the fifth, a double to Torey Wright in the sixth and a single to Gesk in the seventh.

Masontown got one run in the first inning off Copperheads starting pitcher Joe Sabolek when Chad Petrush scored on Uhazie’s sacrifice fly.

Masontown, which stranded 12 runners, threatened in each of the next three innings but Sabolek escaped each jam. He got help in the fourth from centerfielder Spishock who threw out Long trying to score on Chad Petrush’s single with catcher Conner Kelly making a nifty catch and swipe tag.

Sabolek ran out of gas in the fifth when he walked Zimcosky with one out, hit Uhazie and gave up a single to Coll to load the bases.

Krause called on Justin Schrader to relieve Sabolek but Simmons greeted the right-hander with an RBI single to left and a balk call brought in another run to make it 3-3. Long followed with a sacrifice fly and Simmons scored on an infield error to put Masontown up by two.

“Same scenario as the first game,” Krause said. “We made a couple mistakes, the last run was an unearned run and we had the balk call in the middle of the inning. Those things happen, they throw you off and Masontown pounced on it. That one big inning was enough to do us in.”

Masontown played error-free defense and ended the game with a Simmons-to-Coll-to-Austin Bergman 6-4-3 double play. Masontown made just one error in the series.

“Playing a quality team like that, you can’t make mistakes,” manager Palmer said.

Spishock was the player of the game in defeat, going 2-for-3 with a homer, double, walk, two RBIs and two runs scored to go along with an outfield assist.

“Joel is clearly, without question, one of the best hitters in the league,” Krause said. “He had a phenomenal year for us.”

Krause had no qualms about his team’s effort.

“I could not be more proud of them,” he said. “We had a 44-year-old second baseman, a 48-year-old third baseman, a shortstop out of position, a first baseman playing the outfield.

“This series was a real challenge for us. We were contending with work schedules, vacations and one of our best players with a family situation going on, the birth of his first child (Joby Lapkowicz).

“I love this team and these guys. They really worked hard for me.”