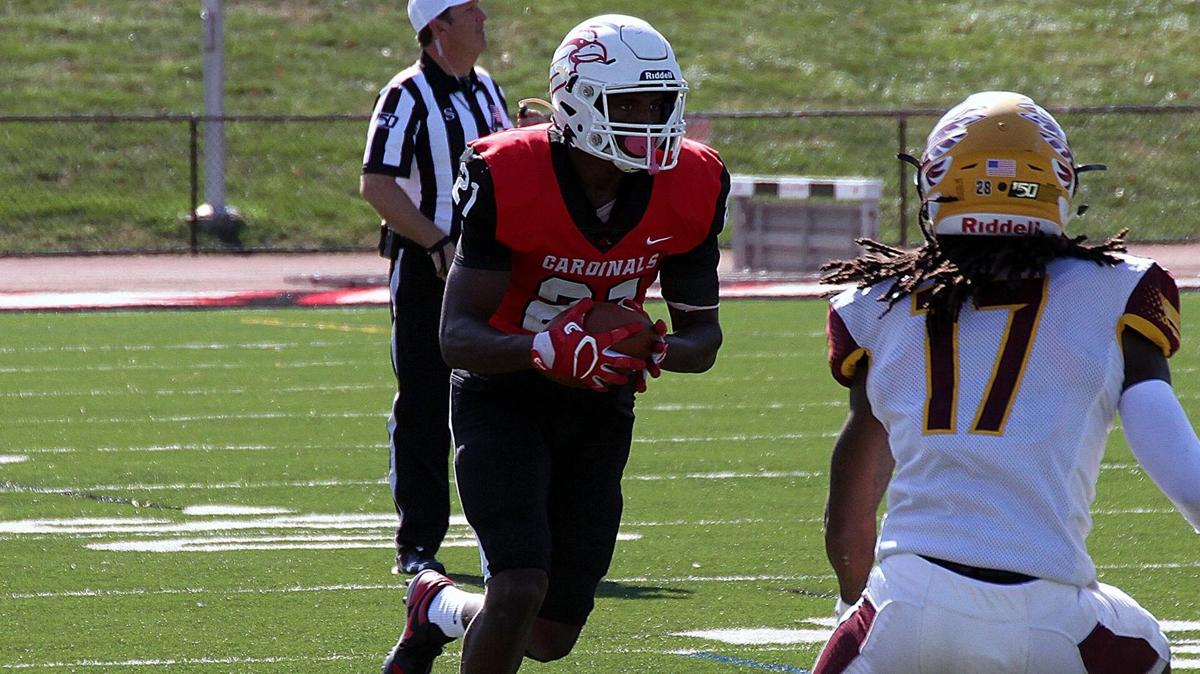 Elizabeth Forward graduate Jaquan Davidson (21) returns for his senior season at Wheeling Jesuit University after he was the second-leading receiver in the 2019 season. (Photo courtesy of Terry Hancock) 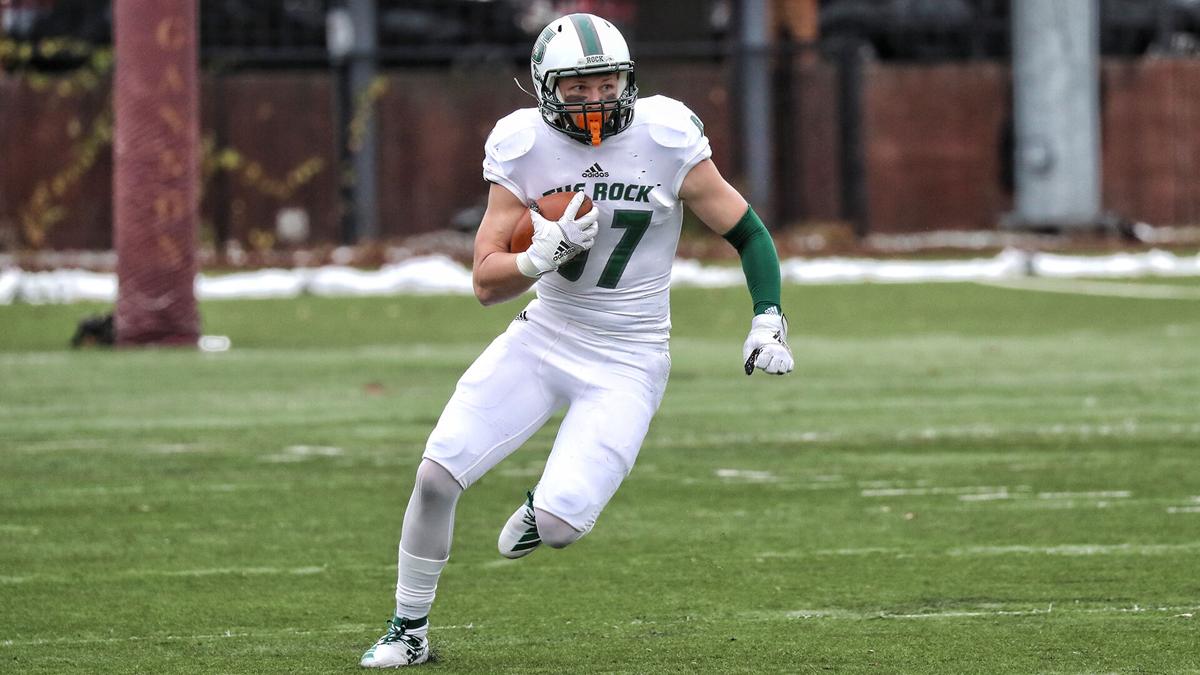 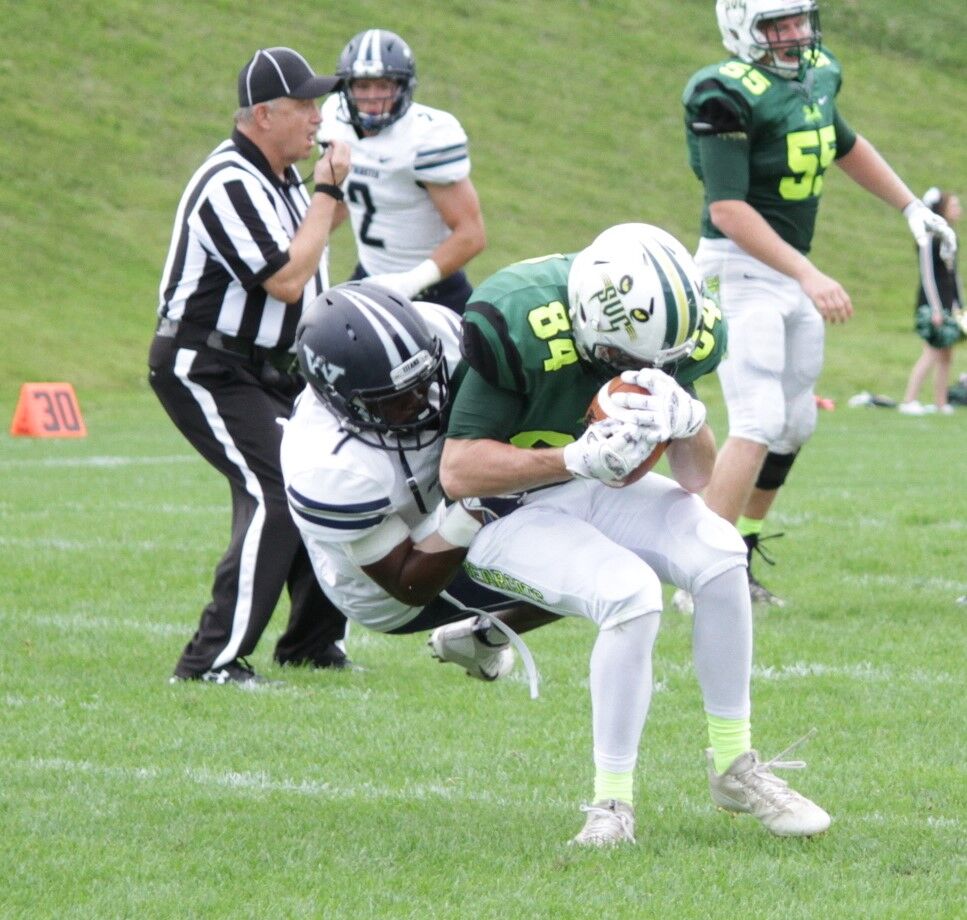 Mount Pleasant graduate Keith Kalp (84) looks to build on his strong 2019 and 2020-21 seasons as one of Saint Vincent’s top receivers.

Elizabeth Forward graduate Jaquan Davidson (21) returns for his senior season at Wheeling Jesuit University after he was the second-leading receiver in the 2019 season. (Photo courtesy of Terry Hancock)

Mount Pleasant graduate Keith Kalp (84) looks to build on his strong 2019 and 2020-21 seasons as one of Saint Vincent’s top receivers.

Editor’s note: The following is an update of former area high school players who are currently playing football in college. Although we try to include all local players, a few are almost always left out. Not all programs posted an updated roster at the time of publishing. If you know of a player we missed, please inform us via telephone (1-800-261-7147), email (hssports@heraldstandard.com; sportsnuts@hotmail.com), or mail (Uniontown Herald-Standard, attn: Sports Dept., 8-18 E. Church Street, Uniontown, Pa., 15401).

Mapletown graduate Blake Holbert, part of the freshmen class, is a defensive lineman.

The Vulcans did not play last fall because of the COVID-19 pandemic.

Belle Vernon’s Gage Rogge (5-11, 225) had his freshman season cancelled because of the pandemic.

Charleroi’s Dakota Romantino (5-10, 165) returns after his freshman season was lost to COVID-19.

Frazier graduate Chad Salisbury enters his fourth season as the offensive coordinator after he was the quarterbacks coach for eight seasons. Fellow Frazier grad Larry Wilson returns to the Vulcans as the longest tenured coach, entering his 16th season as the wide receivers coach/special teams coordinator.

Case Western Reserve did not play in 2020-21 because of the pandemic.

Elizabeth Forward grad A.J. Ackerman (5-11, 170) appeared in all five games for the Dukes as a freshman in 2020-21. Ackerman played the first three games on the offensive line before moving to the defensive line for the last two games, finishing with nine tackles, 2½ tackles for a loss, a half sack and one quarterback hurry. He totaled all but four tackles (3 solo, 1 assist) in the NEC Championship against Sacred Heart.

Ben LaCarte (6-1, 190, DB), a Greensburg C.C. grad from Belle Vernon, also did not play last year and was honored on the 2020-21 NEC Commissioner’s Honor Roll and NEC Academic Honor Roll.

Elizabeth Forward graduate Anthony Brinson (6-2, 340) enters his junior season after playing in nine games in 2019 with three tackles (1 solo, 2 assists) as a noseguard.

Connellsville’s Jared Ozias (6-1, 215) played all five games at wide receiver during the 2020-21 season as he enters his junior season. California’s Jaeden Zuzak (5-10, 215, RB) looks for playing time in his freshman season with the Golden Tornadoes.

The Red Hawks did not play last fall because of the COVID-19 pandemic.

Albert Gallatin graduate Devin Carney (6-0, 187) is a redshirt junior at wide receiver/defensive back after previously playing at Thaddeus Stevens.

Belle Vernon grad Max Bryer (6-0, 210) enters his sophomore season as he looks to find a position on the Lords’ defense at linebacker.

Belle Vernon graduate Blake Zubovic (6-4, 325) enters his redshirt junior season on the Panthers’ offensive line. Zubovic played in seven games in 2020, making two starts at right guard. He started in consecutive games against Virginia Tech and Clemson. Zubovic did not play in any games in the 2019 season.

Fellow Belle Vernon graduate Cam Guess (5-11, 200) was a walk-on after he graduated high school early and enrolled in January 2020. He did not play in any games last season.

Belle Vernon’s Hayden Baron (6-3, 270) looks to position himself on the Colonials’ offensive line as he enters his sophomore season.

Mount Pleasant’s Keith Kalp (6-0, 175) enters his senior season for the Bearcats after playing four games in the abbreviated 2020-21 season. The wide receiver caught 23 passes for 268 yards and two touchdowns. He caught eight passes against Grove City and Bethany (W.Va.), and four receptions for 103 yards against Waynesburg. Kalp was a starter at wide receiver in 2018 with 30 receptions for 321 yards and four touchdowns. He totaled 102 yards and a touchdown on five receptions against Carnegie Mellon, and finished with five receptions against Case Western Reserve.

Yough graduate Mason Brunson (5-11, 165) played four games in his sophomore season at cornerback, finishing with 21 tackles (12 solo, 9 assists). He had six tackles in the Grove City and Washington & Jefferson games.

Waynesburg Central grad Caleb Shriver (5-9, 170) played in four games at safety as a freshman in the 2020-21 season with two solo tackles.

Elizabeth Forward’s Nathan Sullivan (5-10, 190) played in one game at linebacker in his freshman season in 2020-21 against Waynesburg with five tackles and an interception.

The 2020 season was cancelled because of the pandemic.

Ringgold’s Max Maciejewski (6-4, 235) played in four games at tight end as a sophomore in 2019. He returned from an injury to catch two passes for 38 yards, with his top reception 30 yards in the PSAC Championship against Kutztown.

Belle Vernon graduate Eric Oblak (6-3, 235) had success in the classroom, being two-time PSAC Scholar Athlete, but the redshirt freshman is still looking for playing time on the defensive line.

Four local players are in their first season on the Tomcats roster.

Monessen’s Brandon Brown (5-11, 195), a Greensburg C.C. graduate, played in three games as a freshman in the abbreviated 2020 season with one tackle and one pass defensed.

Scottdale’s Max Pisula (6-2, 215), also a Greensburg C.C. grad, looks for playing time at defensive end in his junior season after moving to the position as a sophomore. Pisula played quarterback as a freshman.

Former California head coach Darrin Dillow is on the football coaching staff as an assistant since the 2019 season.

California graduate Jelani Stafford (6-1, 310) played in six games in the 2021 spring schedule on the defensive line with one solo tackle against South Dakota State. He returns on the Penguins roster as a redshirt freshman.