Log In Sign Up
You have permission to edit this article.
Edit
News
Obituaries
Calendar
Classifieds
Sports
Opinion
Greene County Fair
About Us
Homes
Public Notices
Subscribe
e-Edition
1 of 2 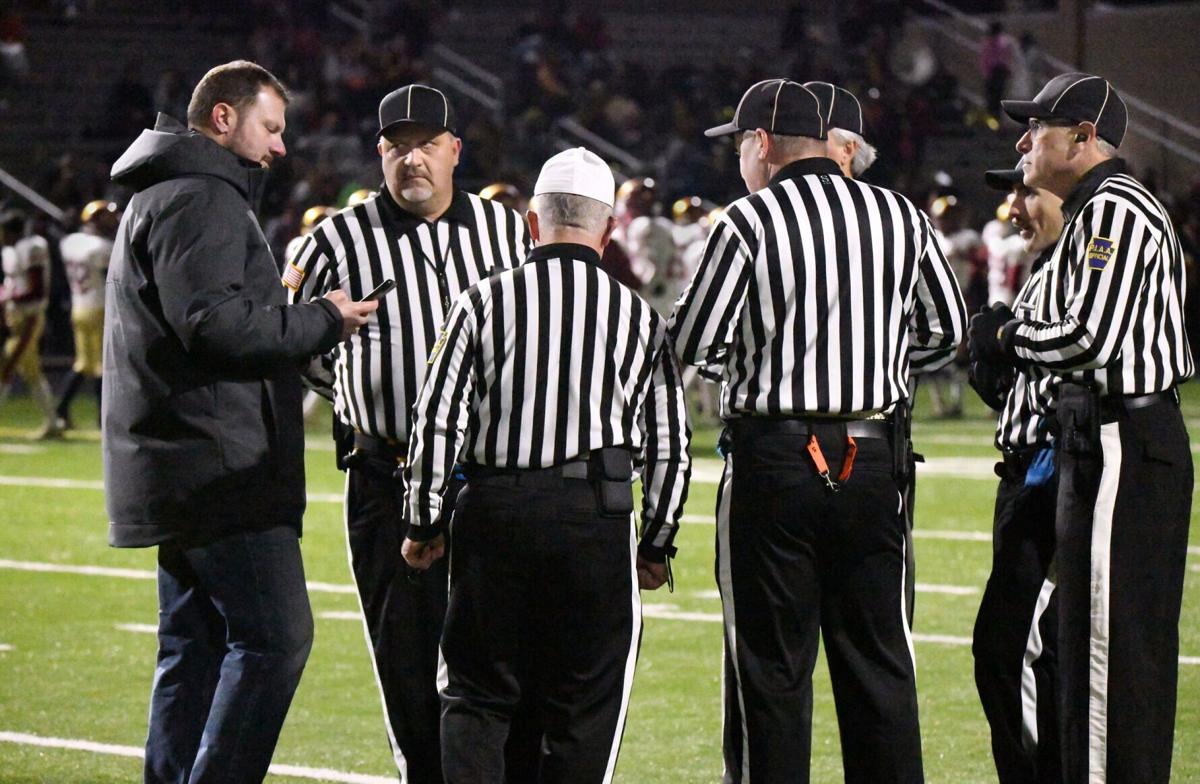 Trinity High School athletic director Ricci Rich, left, the game manager for the WPIAL, meets with the officiating crew before the Washington-New Brighton game in the WPIAL Class 2A football playoffs last Friday. Officials are leaving youth sports in droves for various reasons. The influx of new and young officials has been small, causing a shortage. (Photo by Mark Marietta) 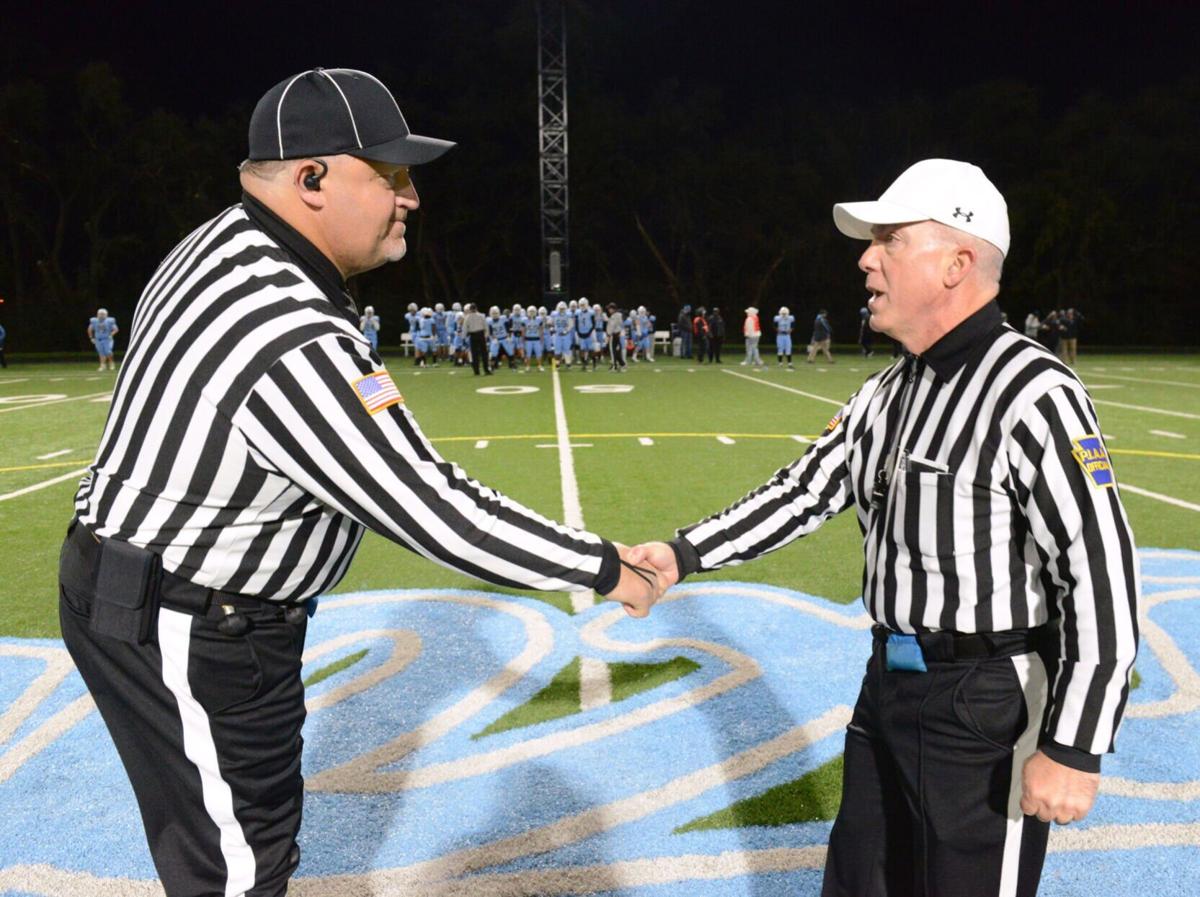 Trinity High School athletic director Ricci Rich, left, the game manager for the WPIAL, meets with the officiating crew before the Washington-New Brighton game in the WPIAL Class 2A football playoffs last Friday. Officials are leaving youth sports in droves for various reasons. The influx of new and young officials has been small, causing a shortage. (Photo by Mark Marietta)

Part I of a two-part series focusing on the shortage of officials in the PIAA and WPIAL and across the country.

A shortage of game officials, blamed on poor and unappreciated treatment from fans, parents, and in some cases, coaches and players, is wreaking havoc on scheduling in both high school and small college athletics.

The dearth of officials in the PIAA, and locally in the WPIAL, is leaving assignors scrambling to meet the needs of athletic directors.

The lack of game officials has led to younger, inexperienced officials being used in high school varsity sports this fall.

Where in the past young, neophyte officials were brought along slowly through the ranks of youth, middle school and junior high sports, the current state of the system forces relatively new officials into varsity action.

The Pennsylvania Interscholastic Athletic Association celebrated and recognized its registered officials early in October with an Appreciation Week. Both winter and spring sports officials will be recognized during the months of January and April 2022.

According to the PIAA, there are about 14,000 PIAA-registered officials in the state and the celebrations target those that currently work fall, winter and spring sports.

It is a full-court press to recruit or lure young people into the officiating profession.

The targets are athletes who are not planning to go on and play a collegiate sport or a recent college graduate whose athletic career will not extend to professional sports.

“I decided I wasn’t ready to say goodbye to something (volleyball) I spent 10 years playing,” said Mabel Culp, an official for five years who played at Waynesburg University and Jefferson-Morgan High School. “I was going to be prepared to be a great coach by learning the most I can about the sport. I keep officiating because I’m not a quitter. If I find something I like to do, I refuse to be bad at it.”

In addition to the abuse they take, officials say lack of sufficient payment for their services, increased costs for required clearances and proper uniforms, time away from home, poor sportsmanship and the pandemic are reasons for the decreasing pool of officials.

Nick Morea, head of male officials for the WPIAL, said football schedules as early as 2022 will likely change with games being spread out through the week beginning on Thursdays and running through Saturdays. Other sports, such as soccer in the fall, basketball and wrestling in the winter and baseball, softball and track and field in the spring, might play games on nontraditional days.

The shortage of officials in high school and middle school has been a growing concern for several years. Now, additional sports officials are choosing to stay on the sidelines because of health concerns related to COVID-19 or they were uncomfortable wearing a mask during games.

The challenge for schools and state associations is how to recruit more individuals to become officials and how to retain those people currently serving as officials? Short of unexpected events like the pandemic, if new officials remain active after the first three to five years, the outlook for a long-term career improves.

“We knew it was coming. It’s already here and we are at epidemic levels,” said retired NFL and NCAA referee and current CBS rules analyst Gene Steratore. “It is national. We are suffering. We just don’t have enough officials.

“We’re putting referees on the field who are in their first year. It is sad to be in this position. Many of them are not prepared, not ready to be thrown into the mainstream. I must hire a lot of applicants right now that wouldn’t have been interviewed in past times. But I don’t want to discourage them. You try to start them out as clock operators, do freshman and middle school games.

“The challenge facing us now that we never faced before,” Steratore continued, “is that there was a higher interest in people who wanted to be involved a couple decades ago. That interest is down now. The volatility of the fans makes it not as rewarding. We never had to go and recruit a bunch of people in the past. There was a normal progression that has diminished.”

Edward Zboyovsky, president of the Mon Valley Football Association and a 33-year veteran football and basketball official, said it is clear why numbers are low.

“The main reason for the shortage is the abuse we take from spectators and coaches,” said Zboyovsky, who is a former baseball umpire. “Some spectators are cruel and make it personal. They call us names and use inappropriate language. I’ve been called just about everything. The game manager or site manager is supposed to take care of the spectators who address game officials inappropriately, but it almost never happens. We, as officials, should never confront and/or eject a fan directly. According to the PIAA, this needs to be taken care of by the game management.”

He added that cost and time are factors.

“Including registration fee, clearances, and uniforms, a new official has potentially more than $300 invested before he/she steps on the field or court. There are chapter dues and travel to and from games and meetings. If you want to be considered for the state tournament, then you must attend the PIAA state convention once every five years. The cost is around $100 plus hotel costs, food, tolls, travel, taking personal leave from work. It all adds up.”

Clearly, the shortage has forced young and inexperienced officials onto the field this fall. Mistakes were made, mechanics have suffered and the overall quality of game organization and operation has waned.

To wit, in a Class A soccer game this fall, a goalkeeper made a save and knocked the ball out of play as it hit the crossbar and upright of a goal post — which is clearly out of bounds. While the goalkeeper pointed to the post, play was allowed to continue another 10 to 12 seconds before a whistle was blown to stop play. Two additional shots on goal were made prior to the stoppage.

A pass was intercepted in the end zone of a football game at Monessen and a touchdown was signaled.

In a regular-season football finale at Wash High Stadium, McGuffey yielded a TD pass with just three seconds remaining to lose to the rival Prexies, after taking a one-point lead with 20 seconds remaining.

Wash High needed just two plays after the kickoff to score. However, on the game-winning play, Wash High quarterback Davoun Fuse rolled right, and threw a pass while he was across the line of scrimmage. No penalty was called because the linesman on that side of the field was caught up in the moment and moved from his assigned spot to five yards downfield, completely unable to throw a flag because of being out of position. The game-winning pass handed the Highlanders a bitter defeat.

“We are seeing referees who are not ready to work varsity competition being sent to varsity games,” said Andy Manion, who is a soccer and basketball official since 2001 and Chartiers-Houston’s baseball coach. “Some officials are working multiple games on a given day, particularly on Saturdays.

“I see this as a classic risk-reward scenario. In the short term, there is the risk a game, and potentially a season, could be determined by a mistake a veteran official would not have made. But in the long term, these inexperienced officials could bloom into strong officials and do so more quickly.”

“I see it all the time, there are officials who are working football, soccer, and volleyball who simply do not understand the rules yet let alone the mechanics,” Osleger said. “Let me clarify here that it is not necessarily their fault, they are needed by the assignor. PIAA dictates a certain number of officials must work varsity games. They have a license therefore they are considered eligible to work. Trust me, the assignor’s probably cringe when they assign games, but they have to fill the slots, thus people work who might not be ready.”