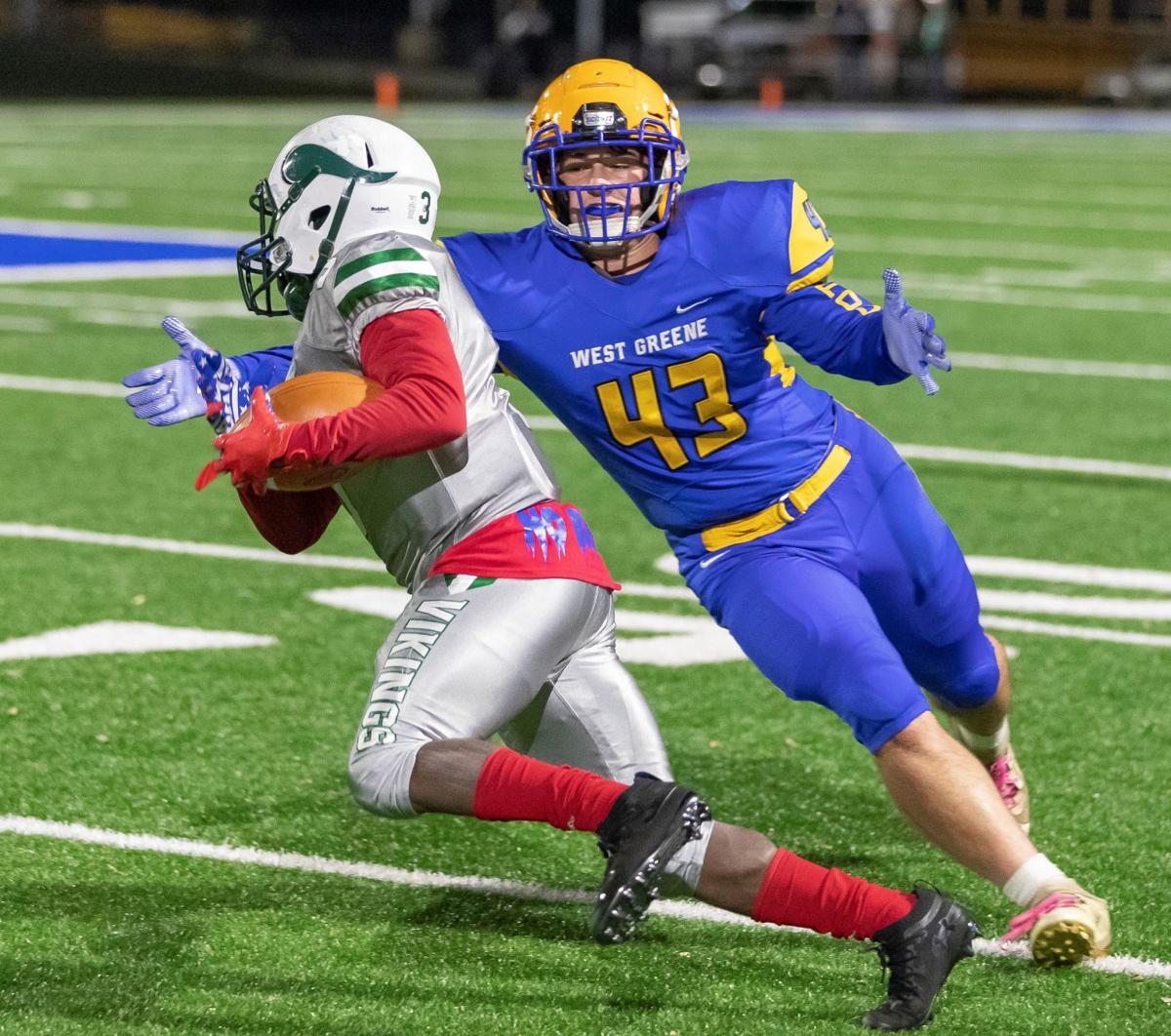 West Greene’s Corey Wise tackles Sto-Rox’s Amahd Pack during a WPIAL Class A semifinal game at Trinity Middle School on Nov. 8, 2019. Wise, who was an All-Tri-County South Conference player on offense and defense last year, returns to the Pioneers for his junior season. (Photo by Darnell Graham) 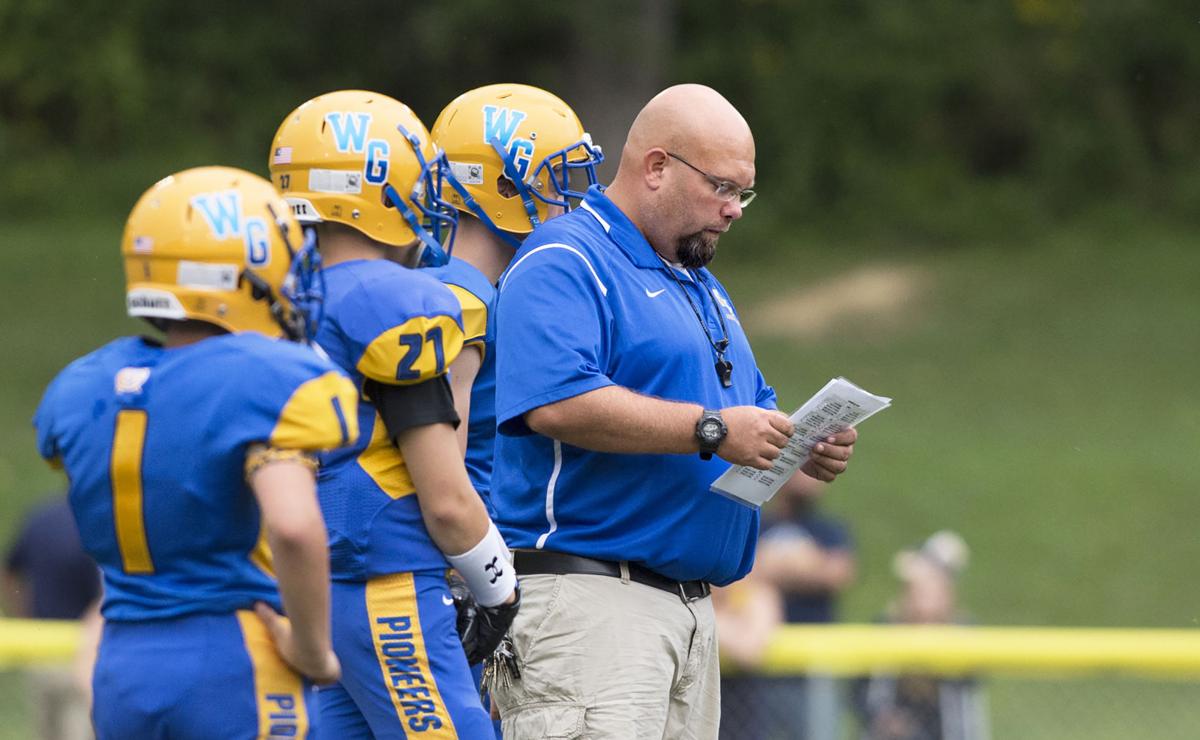 West Greene’s Corey Wise tackles Sto-Rox’s Amahd Pack during a WPIAL Class A semifinal game at Trinity Middle School on Nov. 8, 2019. Wise, who was an All-Tri-County South Conference player on offense and defense last year, returns to the Pioneers for his junior season. (Photo by Darnell Graham)

How do you follow up one of the greatest football seasons in school history?

West Greene coach Brian Hanson led the Pioneers to an outright Tri-County South title, their first playoff win since 1993 and a spot in the WPIAL semifinals in 2019.

Benjamin Jackson played a huge role in West Greene’s success with a record-breaking season at running back while also excelling as a linebacker. He’s now at Army. The Pioneers lost several other talented seniors to graduation as well.

Hanson doesn’t see the cupboard as being bare as he approaches his second season at West Greene.

“If we stay healthy, I feel we can have a very good season,” Hanson said. “I know I’m going to keep the standard really high for them.

“Our biggest concern is just depth at certain positions. We have about five or six starters back on both sides of the ball.

“A lot of guys started as 10th-graders and got a lot of experience. But now they have to learn to win the football game and not lean on the Ben Jacksons and the Kolin Walkers and the Brock Bedilions like last year. They weren’t really asked to carry that burden, but that will change this year.”

While no one can be expected to do what Jackson did in 2019, Hanson feels he has a more than capable replacement.

“Corey Wise is going to be our lead back,” Hanson said. “Corey started at tight end and linebacker and was an all-conference kid on both sides of the ball last year as a sophomore. But when we went into a three-back set he was in the backfield.

“I truly believe if Corey plays to his potential he’s the best running back in the league. He’s about 5-11, 215 pounds and has real good power and balance. He doesn’t have Ben’s long speed, but he does have good speed. He’s an all-around really good football player. We need him to step up as a leader. That’s his biggest challenge.”

Junior Hunter Hamilton will also start in the backfield.

“Hunter and Corey will be two of the more predominant ball carriers for us,” Hanson said.

Nathan Orndoff switched from wide receiver to quarterback late last season but will move back out to his old spot this year with Wes Whipkey stepping in under center. Both are juniors.

The Pioneers have a strong set of linemen to lead the way for their rushing attack.

A familiar name also will step into the trenches this year.

“Ben’s youngest brother, Brian Andrew Jackson (5-9, 240), is probably going to start for us as a freshman,” Hanson said. “We’re reping him at center. He’s a little short but he’s a fire plug. He’s got that Jackson DNA. He’s going to be a really good ball player.”

On the defensive side of the ball, Wise will also lead the way. In fact, Hanson feels Wise is a better linebacker than a running back.

“Corey has been the most dominant player on our defense,” Hanson said. “I think Corey will be able to play college football as a defensive player. He covers well, tackles well and he’s got phenomenal technique.”

Hanson has a big secondary led by Whipkey (6-1) and Orndoff (6-3), along with Colin Brady (6-1) who is another freshman with great potential.

“We’re hoping to be pretty aggressive in the secondary,” Hanson said.

Another weapon that returns is sophomore kicker Kevin Thompson, who booted 47 extra points a year ago. Thompson might be worked into the offense also, according to Hanson.

“Kevin might get some reps at running back or receiver because he is ultra-quick,” Hanson said. “He’s very inexperienced but when you play 1-A football and you only have about 25-26 kids on a team, you need to find who your best athletes are. From an agility and quickness standpoint, he’s one of the best kids in school.”

Hanson is confident his team can push for a TCS three-peat.

“We want to win the conference,” he said. “That’s always going to be a goal for us.”