You are the owner of this article.
Edit Article Add New Article
News
Obituaries
Calendar
Classifieds
Sports
Opinion
Greene County Fair
About Us
Homes
Subscribe
1 of 5 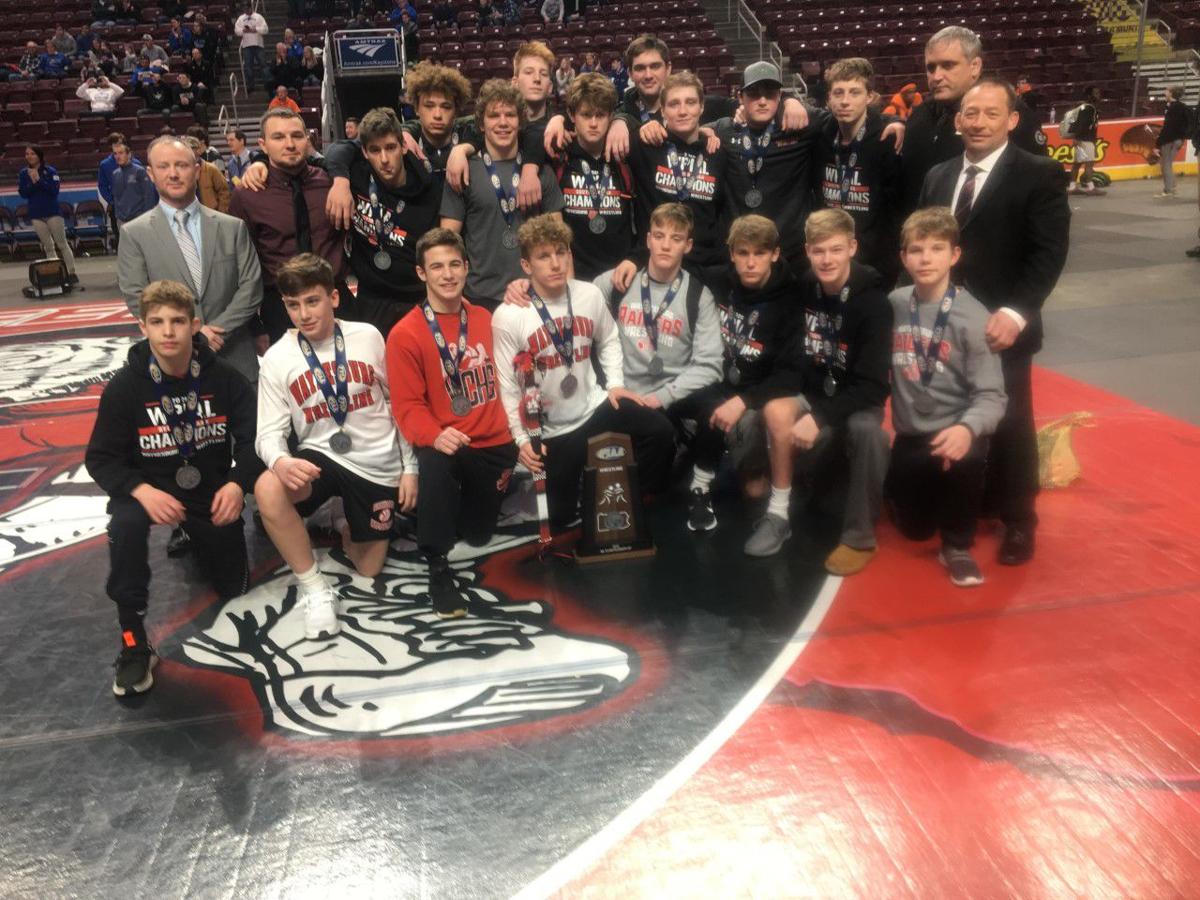 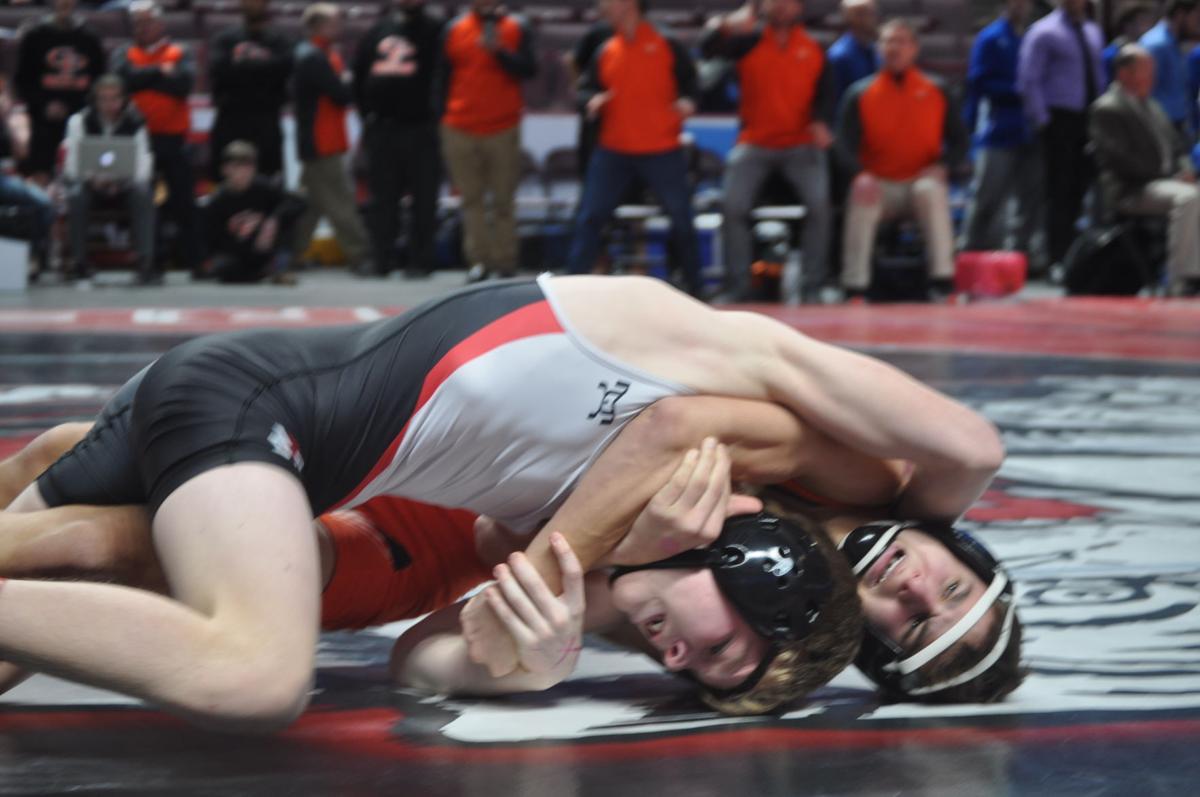 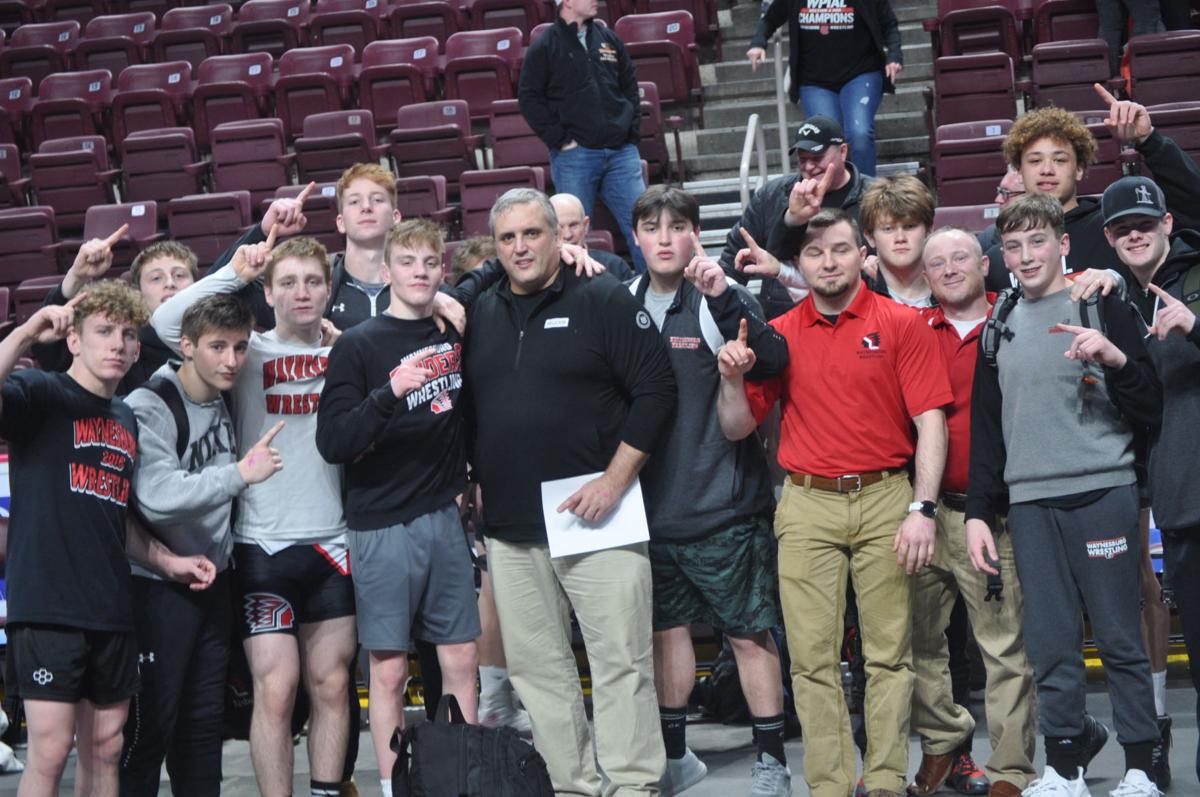 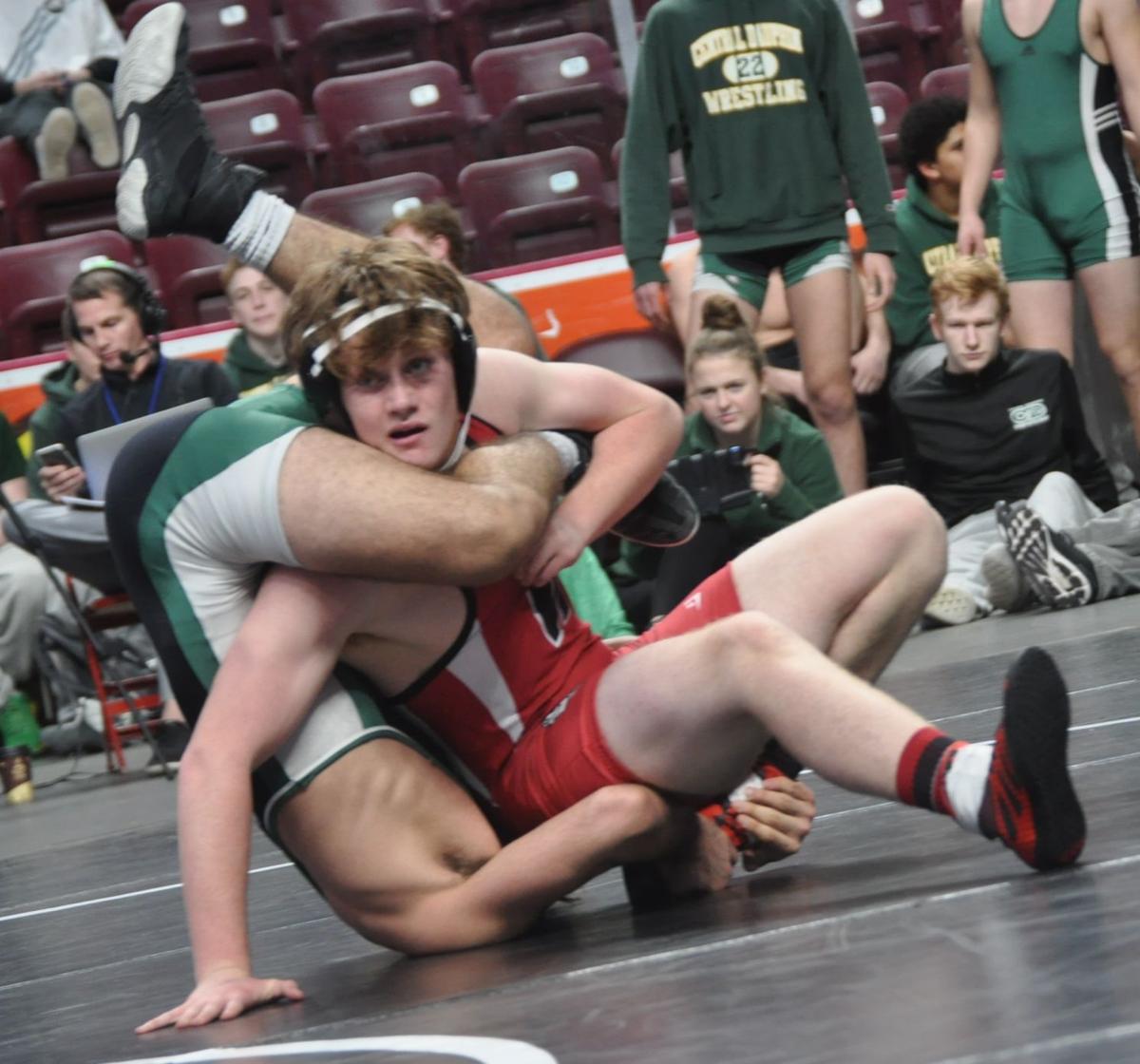 Eli Makel of Waynesburg Central seems to have the head of Behruz Anvarov of Central Dauphin stuck through the mat during their 170-pound bout. Makel won a 4-3 decision. (Photo by Joe Tuscano) 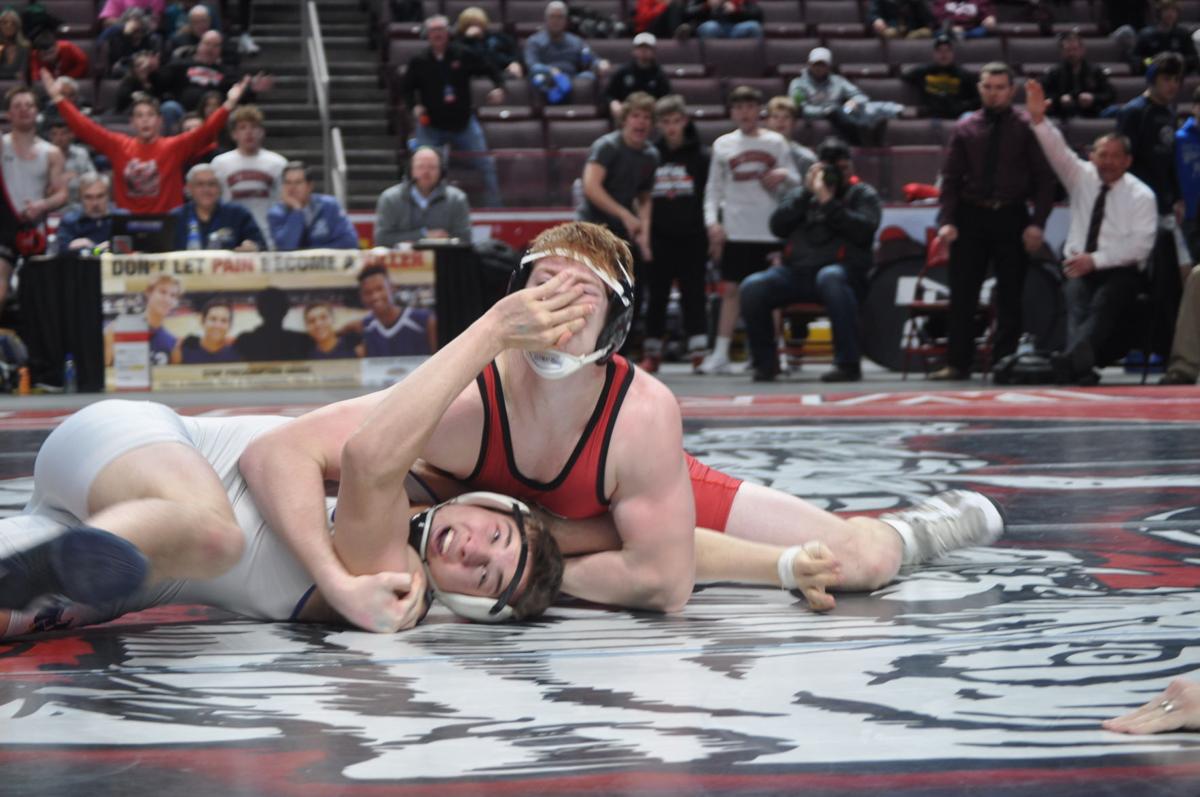 Noah Tustin gets poked in the face by Nazareth’s Drew Clearie at 195 pounds in the PIAA Class AAA Team Tournament Saturday in Hershey. Tustin won a 9-6 decision. (Photo by Joe Tuscano)

Eli Makel of Waynesburg Central seems to have the head of Behruz Anvarov of Central Dauphin stuck through the mat during their 170-pound bout. Makel won a 4-3 decision. (Photo by Joe Tuscano)

Noah Tustin gets poked in the face by Nazareth’s Drew Clearie at 195 pounds in the PIAA Class AAA Team Tournament Saturday in Hershey. Tustin won a 9-6 decision. (Photo by Joe Tuscano)

HERSHEY — When wrestling fans in Southwestern Pennsylvania saw the amazing accomplishments of Waynesburg Central High School’s wrestling team, one couldn’t help but wonder what type of team could ever beat them.

Only the No. 1 team in the state, Nazareth.

The Blue Eagles showed themselves to be more than enough to handle the Raiders Saturday afternoon at the Giant Center in Hershey.

Nazareth won 38-21, capturing nine out of the 14 matches and sending the Raiders to their first loss in 16 dual meets.

“Boy, I’m so proud of these kids. Our goal was to win the state team title and we came so close,” said Waynesburg head coach Joe Throckmorton. “That’s going to be our goal for next year.”

Waynesburg’s remarkable season ended one victory shy of perfection. The Raiders won the Section 4 title by beating arch-rival Cannon-McMillan, then went on to win their first WPIAL team title in 31 years.

Waynesburg was making its first appearance in this tournament and the Raiders wowed fans in the arena when they defeated Bethlehem Catholic, considered one of the favorites to make it to the finals against Nazareth in the semifinals.

“They work so hard and they get better and better,” said Throckmorton. “Man, they’re such a young team but they’re so experienced. They are winners because they work around winners. They are just so positive. They keep it light in the room and with the coaches. We are having fun in the wrestling room. The kids make the coaches have fun and that’s what you do this for, fun.”

The match started at 220 pounds, possibly the worst spot for the Raiders. Throckmorton decided to forfeit and move Ryan Howard up to heavyweight. The move worked as Howard won a decision in overtime, 5-3, against Matthew Burton.

And Mac Church followed with a hard-fought 1-0 victory over Charles Bunting to tie the match at 6-6.

Nazareth took over from that point, winning six of the next eight and taking a commanding 26-15 lead that it would never relinquish.

“We don’t have the one hammer,” said Nazareth head coach Dave Crowell. “We used to but not this year. They all stepped up to help. There shouldn’t just be one leader because that means the rest of the guys are followers.“

Waynesburg’s top wrestlers came through with victories, including Rocco Welsh at 126, Wyatt Henson at 138 and Luca Augustine at 170.

But it was not enough.

If the Raiders stay healthy next season, they should be gunning for the same title at the same time and same place. The Raiders have no seniors on their roster, while the other final four powerhouse teams will suffer varying amounts of graduation.

“The high point of the year? I think that was Friday, when we beat Bethlehem Catholic,” said Waynesburg’s 132-pounder Cole Homet. “And finishing in third place at Powerade was another high point. The highs and lows teach you and you just have to embrace it.”

Waynesburg competed in one of its most epic matches of the program with its 33-31 win over Bethlehem Catholic Friday night. The Raiders downed Erie Cathedral Prep, 44-24, in the quarterfinals, and opened the tournament with a 40-21 victory over Central Dauphin in the first round of Thursday evening.

This match had just about everything one could think of happening. But the most significant situation came in the 113-pound weight class.

Bethlehem Catholic was called for a slam on Nate Jones in the first period. Dante Frinzi lifted Jones into the air and brought him down with a thud. Jones was obviously in pain and the referee stopped the action, awarded a penalty point and started the injury time.

When the two minutes expired and Jones was not able to continue, Frinzi was disqualified and Waynesburg awarded six points. Bethlehem Catholic also had a team point deducted for unsportsmanlike conduct. Waynesburg led 26-8.

The six points were crucial for Waynesburg because Church, the top-rated 106-pounder in the state, lost a 4-3 decision to Tyler Kasak. Later, wins by Welsh and Henson at 126 and 138, respectively, sealed the win and allowed Waynesburg to forfeit the final two weight classes to make the score close.

“I knew it was going to be like madness,” said Welsh. “This win is awesome and we have an opportunity to go after (Nazareth) with no seniors.”

Howard, as a junior, is considered old for this team, in a good way.

“I’m pretty much the old man,” Howard said with a laugh. “I haven’t seen anything like this but I knew we could do it.”

The big bout in the dual meet against the Ramblers came at 106 pounds, where Church won a dramatic 2-1 overtime decision against Jacob Van Dee. This was a match-up of the No. 1, Church, and No. 2, Van Dee, wrestlers in the state.

Jones followed Church’s win with a gutsy performance of his own. Jones scored in the final two seconds of his bout to take a 4-2 victory from Elijah Hunt at 120 pounds.

That seemed to invigorate the Raiders. Welsh followed with a 20-5 technical fall over Kaemen Smith at 126 pounds.

Another big victory came at 182 pounds, were Darnell Johnson pinned Luke Sittinger in 5:09.

Waynesburg won nine of the 14 bouts.

Waynesburg led 22-3 after six bouts against the Rams in the opener. The Raiders lost the opener then won five straight. Welsh (126), Homet (132) and Henson (138) also had wins in the run.

Two big wins came at 120 pounds, where Hunter Shriver pinned Liam Kennnedy in 3:57, and at 138, where Colton Stoneking got a takedown as time expired for a 7-5 victory over Bryce Buckman.

“I wouldn’t say that was a surprise,” Throckmorton said. “We knew there were going to be some 50-50 matches and we wanted to win them. Hunter did a great job. Colton had a wild match. He’s learning how to control them. He can flurry when he needs to, too. That was a big win for him.”