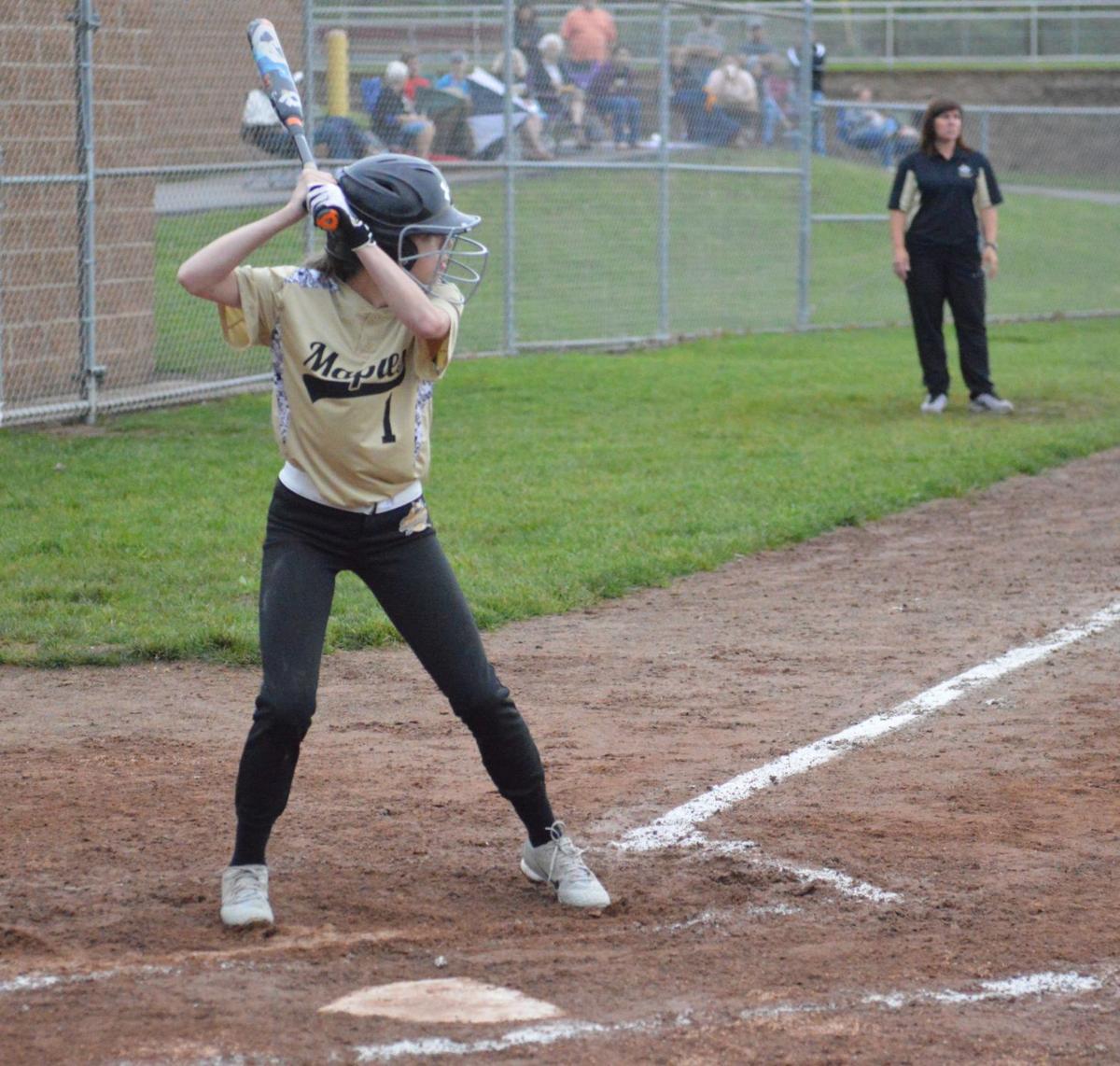 Mapletown’s Faith Burkholder-Walter bats against Sewickley Academy as Lady Maples head coach Gina Perry looks on from the third-base coaching box during a WPIAL Class A first-round playoff game at Peterswood Park on May 14, 2018. Perry and senior Burkholder-Walter were aiming to lead the Lady Maples to a third consecutive playoff berth this spring until the coronavirus pandemic forced the cancellation of the season. (Photo by Rob Burchianti) 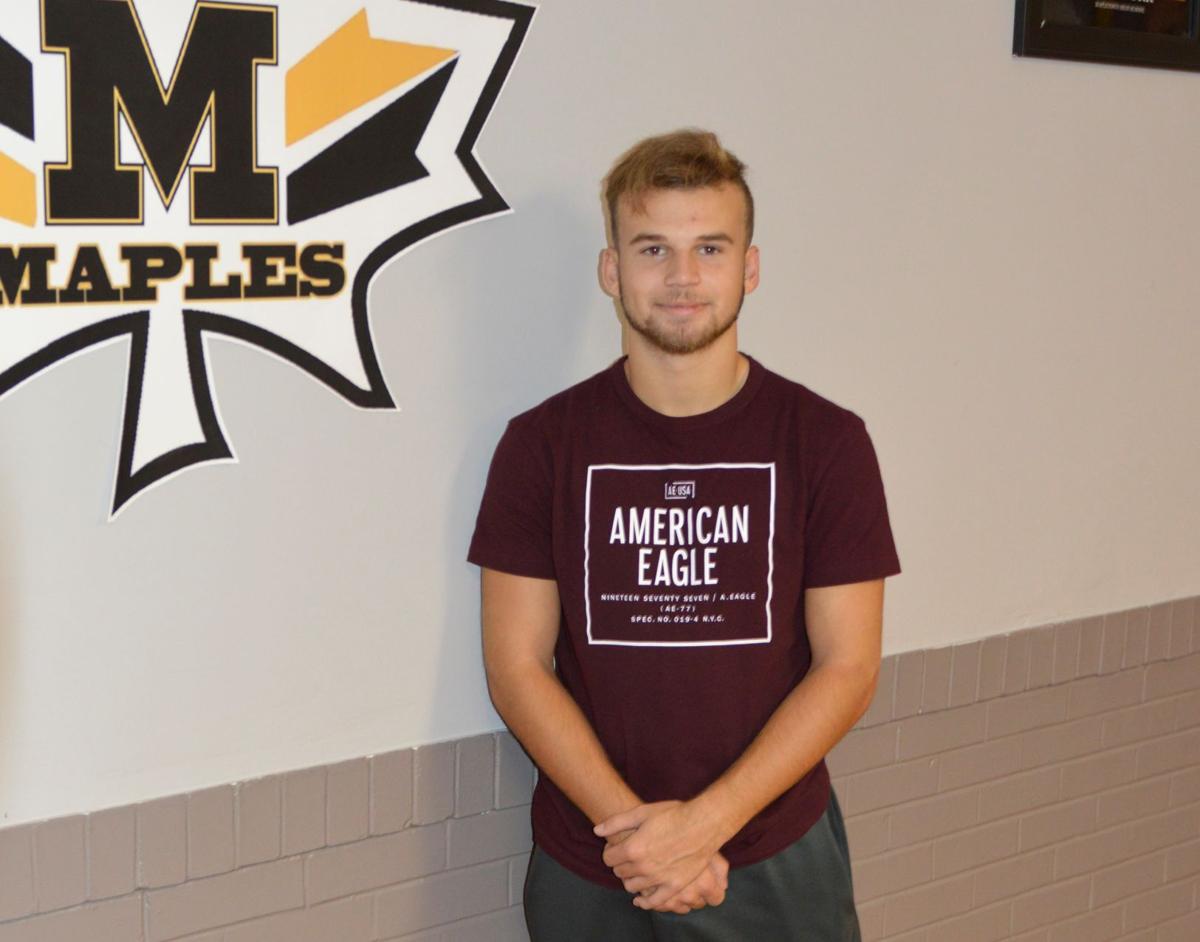 Mapletown senior Chuck Lash was a three-year starting center fielder for the Maples but lost his senior baseball season due to the coronavirus pandemic. (Photo by Rob Burchianti)

Mapletown’s Faith Burkholder-Walter bats against Sewickley Academy as Lady Maples head coach Gina Perry looks on from the third-base coaching box during a WPIAL Class A first-round playoff game at Peterswood Park on May 14, 2018. Perry and senior Burkholder-Walter were aiming to lead the Lady Maples to a third consecutive playoff berth this spring until the coronavirus pandemic forced the cancellation of the season. (Photo by Rob Burchianti)

Mapletown senior Chuck Lash was a three-year starting center fielder for the Maples but lost his senior baseball season due to the coronavirus pandemic. (Photo by Rob Burchianti)

The following is one in a series of stories featuring local high schools which lost their spring sports seasons due to the coronavirus pandemic.

Mapletown co-athletic director Linda Messich had a problem to deal with as the baseball season was just getting underway this spring.

“That Friday, March 13th, our baseball team was getting ready for a scrimmage the next day and they had some issues with the uniforms so they decided they weren’t going to give them out that day, they were going to wait until the next day,” Messich recalled.

“And the next day never came about.”

The coronavirus pandemic was starting to get a foothold in the country and the spring season was delayed and then cancelled altogether.

“We had no idea this was going to end up the way it did,” Messich said.

“It was really heartbreaking for all the seniors. There’s just no words to describe it. I feel bad for all of them, not only for our seniors losing their last season but all the other schools. We’re friends with many of the other coaches and Billy Simms, for instance, looked like he had such a great softball season ahead of him at West Greene, and lost that opportunity.”

The pandemic also put a halt to the PIAA swimming championships, which Lady Maple freshman Ella Menear had qualified for.

“Ella Menear was in the state finals in double-A at Bucknell and they were practically ready to go out the door when they got the word that everything was being shut down,” Messich said.

“It was just crushing for kids to go through that.”

Mapletown’s baseball team was coming off a two-win season that was hampered by injuries and a lack of pitching arms, but fifth-year coach Dom DeCarlo had a positive outlook for 2020.

“We felt teams would probably underestimate us this year,” DeCarlo said. “We had some guys coming back, including Lance Stevenson who missed half of his sophomore year, and some freshmen who have some talent, like Landan Stevenson, Brody Evans.

“Lance missed a bunch of games and still hit well over .300 and made all-county. The season Clay Menear had as a freshman, it was exciting to see what he was going to do this year as well.

“I think we could’ve caught a couple teams off guard and surprised some people this year. Honestly for us, knowing what our section is going to become next year with the realignment, it’ll be a lot different then.”

“Chuck Lash was a two-year captain who’s been starting since the second game his freshman year,” DeCarlo said. “Losing that leadership, losing a guy who’s been playing center field for you for three years is tough to replace.

“Kameron Gee would have also been a four-year player who started getting a lot of playing time last year in right field. He really came a long way. He really worked hard to earn his playing time.

“Matt Atwood was going into his second year. He’s a great story. As a pitcher he got our first win last year. He came on in relief in the first inning against Geibel. Matt was getting better as a pitcher and seeing him lose his senior year right when he was starting to figure things out is disappointing.”

While DeCarlo was desperate for arms last year, his pitching staff looked to be much improved in 2020.

“Last year was Matt’s first year ever pitching and he ended up being first or second on the team in innings pitched,” DeCarlo said. “We used him a lot because he would throw strikes. He would’ve been one of our pitchers this year with Lance, Landan and Brody and Joe Morris. It was going to be nice for me because I wouldn’t have had to worry about pitch counts all the time.”

Things were running smoothly for DeCarlo before the pandemic hit.

“We were about at three weeks of open gyms and two weeks of practices in,” DeCarlo recalled. “I was just starting to stretch my pitchers out from going two innings to three and four. We were supposed to have a game against a West Virginia high school that weekend and I got word at one o’clock that West Virginia cancelled everything and that we were to follow.”

DeCarlo kept his team ready, hoping the season would resume at some point.

“For those two weeks we had Zoom meetings with some guest speakers to keep their minds focused and tell them what they could do at home during quarantine,” DeCarlo explained.

“When I got word that one Friday that Gov. Wolf was shutting everything down, I’m not going to lie to you, it broke my heart, for those three seniors especially, and also for guys like Lance who are aiming to play beyond high school.

“Lance had a very good freshman season, then he had those injuries last year. Seeing him miss his junior season, and recalling what I went through when I played at Brownsville and knowing how important those underclassmen years are, this would have been a prime time for colleges to get eyes on him. It’s tough to see him miss out on that chance.

“Seeing this happen, it was really sad.”

Still, DeCarlo feels the program is on the rise.

“We had 12 players to begin with last year,” he pointed out. “This year we had 17 on the roster. The good thing is, while we’re losing three good kids, we’ll probably be gaining five more kids at least.”

Gina Perry has been part of a resurgence of Mapletown softball as the Lady Maples were attempting to reach the postseason for the third year in a row.

Perry has been on the coaching staff for nine years, was the acting head coach in 2018 when the team snapped a 10-year playoff drought, went back to being an assistant last year and was stepping in as full-time head coach this spring.

“We had been doing some open gym since January and we probably had practice on the field about five times prior to our first scrimmage, which was scheduled for the Friday that the season was shut down,” Perry said.

“We didn’t expect it to shut down the whole season. We thought it was going to be a brief scare, we’re going to be back on the field in a couple weeks and they we’ll continue on with the season.

“It did not play out that way.”

Perry stayed in touch with her players throughout the first few weeks but the season was eventually cancelled.

“They were devastated,” Perry recalled. “They were expecting something big out of this season. They thought for sure we had a chance at going to the playoffs again and going beyond the first round.

“We thought we were going to have a strong team. We had some freshmen that moved up that we thought would have an impact.”

The pandemic took away the senior season of returning three-year lettermen Faith Burkholder-Walter, Kailey Stover and Katherine Fox, leaders of a team coming off a 10-6 year.

“Faith’s been with us since she was a freshman,” Perry said. “She had played second base and catcher the year before and was going to be behind the plate again this year. She had superior speed and was a good lead-off person.

“Katherine was basically our DH for her freshman and sophomore year. Last year she was DH and our back-up first baseman.

“All three were strong players and they’re definitely going to be missed. I’m sorry they didn’t get a chance to show everyone what they were made of this year.”

Perry can only turn the page and look ahead to 2021 now.

“We’ll just cross our fingers,” she said, “and hope that we have a season next year.”

Caitlyn Dugan is a four-year letterman in softball and volleyball. The Lady Rockets' pitcher, she helped lead her team to the WPIAL semifinals last year. A four-year captain in volleyball, her teams made the postseason three times. Caitlyn was All-WPIAL twice, all-section twice and all-count…

Colton "Jud" Meek is a four-year letterman in baseball and a two-year starter. The left fielder has been part of two West Greene playoff teams. He also is a member of the Ski Club and part of the school's Peer Monitoring Program. Jade Renner is a record-breaking pitcher and outstanding hitte…

Basketball is very important in the lives of Waynesburg Central seniors Lucas Garber and Emma Mankey, but succeeding in the classroom is just as important for the Raider duo.

Austin Crouse is a three-year starter in basketball and football who made the playoffs each season so far. The senior point guard averaged 13 points per game last year. He was named all-conference in football. He also did two years of track & field. Sheyann Watson is a four-year letter-w…

VIDEO: GAME OF THE WEEK — Laurel Highlands vs Mars - WPIAL Class 5A Championship

VIDEO: GAME OF THE WEEK — Thomas Jefferson vs Laurel Highlands

VIDEO: GAME OF THE WEEK — Blackhawk vs Uniontown

Eric Kemp, an aircraft engineer from Melbourne, Australia, tests his motorcycle on a Melbourne road, Sept. 23, 1957. Kemp was inspired by his plane-designing skills to create this motorcycle.