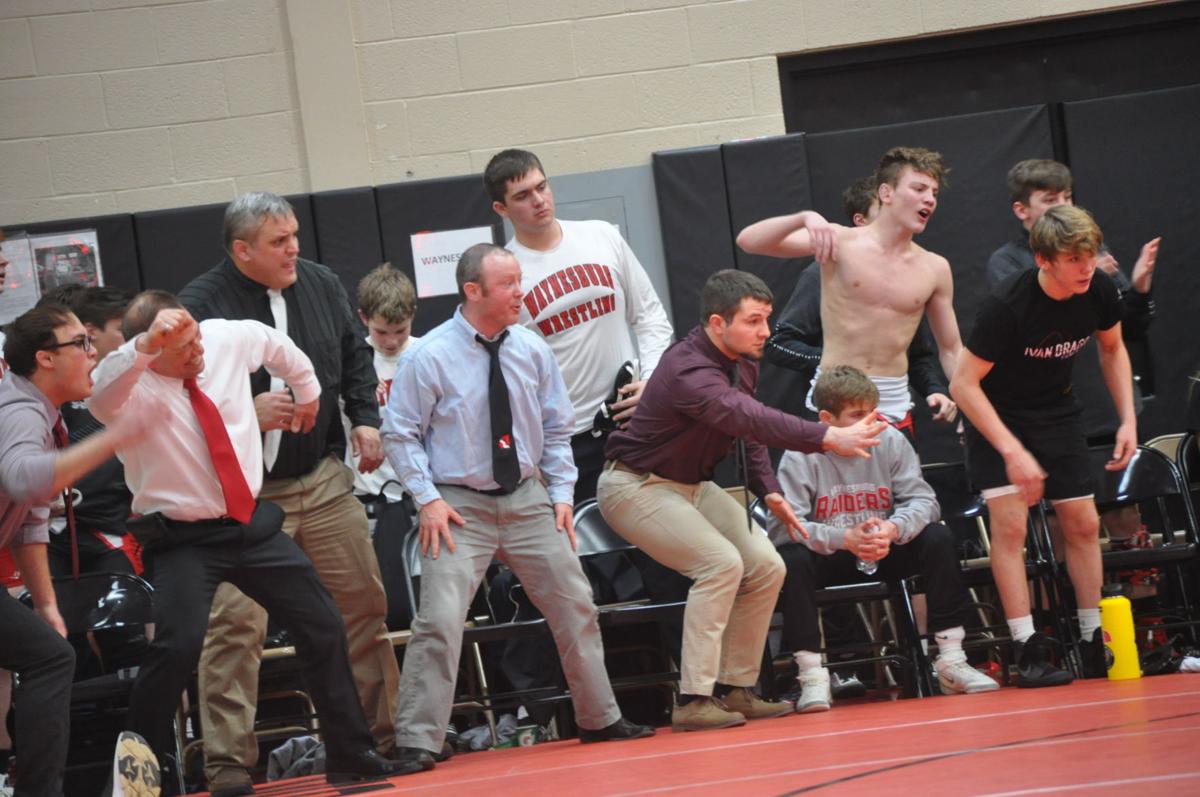 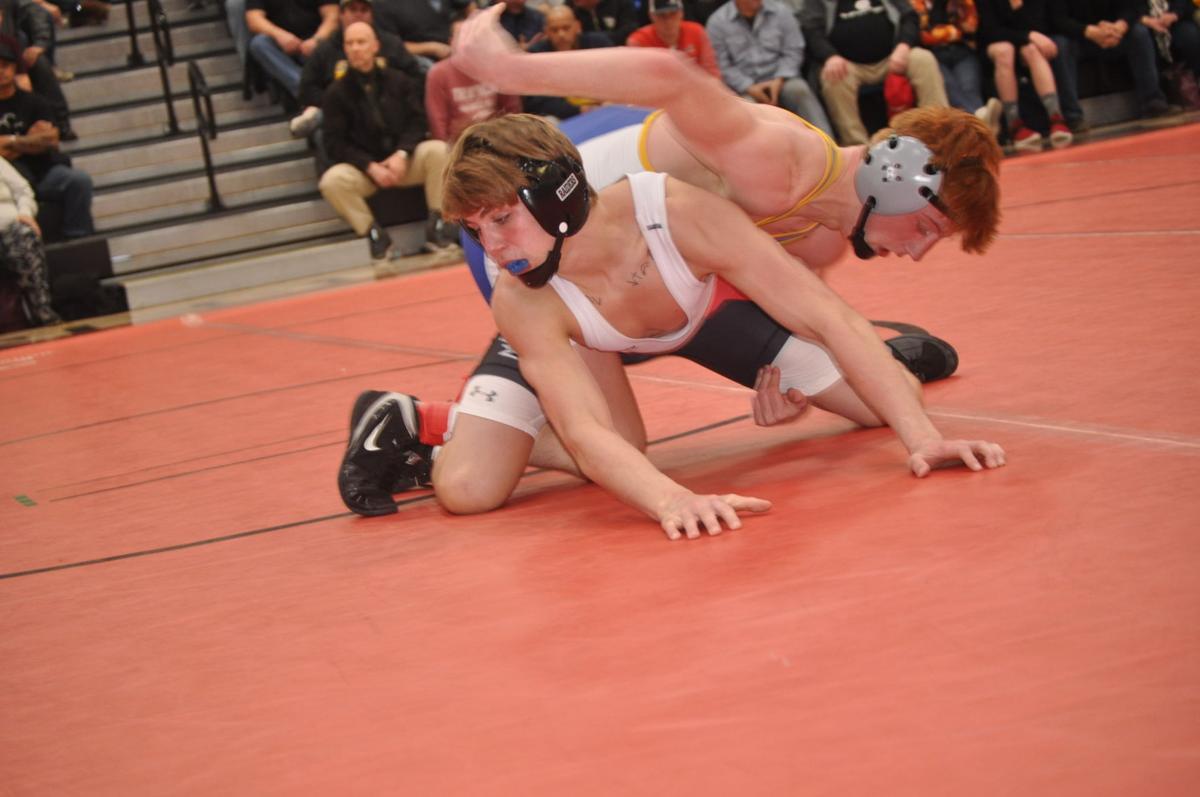 Rocco Welsh of Waynesburg Central (bottom) looks for a way out of the hold of Canon-McMillan’s Jacob Gardner at 126 pounds during last Wednesday’s Section 4-AAA team wrestling final. (Photo by Joe Tuscano) 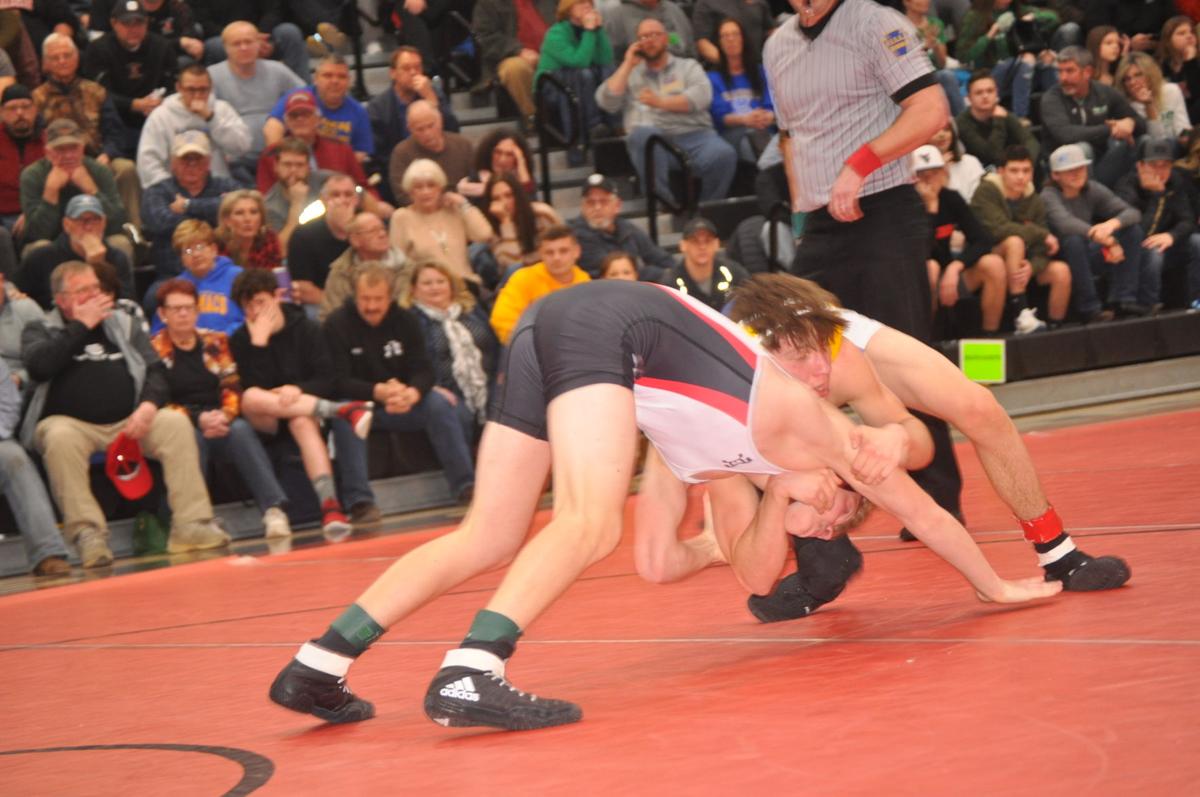 Rocco Welsh of Waynesburg Central (bottom) looks for a way out of the hold of Canon-McMillan’s Jacob Gardner at 126 pounds during last Wednesday’s Section 4-AAA team wrestling final. (Photo by Joe Tuscano)

That was the sound of Canon-McMillan’s streak of winning 18 consecutive section team tournaments coming to an end.

Everyone knew it would not be easy, and they were right.

The dual meet ended in a 30-30 tie. And for about 10 agonizing minutes, the large crowd and wrestlers waited in the middle of the gym as the criteria for victory was checked.

When it was announced that Waynesburg had won by the 10th criteria, nearfall points, the Raiders and their fans erupted.

“We’ve had some tight ones, but that was very important to us and the program,” said Waynesburg head coach Joe Throckmorton. “We were way overdue. I’m happy for the kids, their families, the community, everything. It’s just great.”

Throckmorton said this dual meet was “the best ever between the two teams.

“Whoever was going to win it, will remember this one,” he said.

All the bouts were big but the biggest victory came from Noah Tustin, who was caught in a cradle but somehow managed to pin C-M’s Tyler Rohaley at 195 pounds.

“I knew the cradle was coming,” Tustin said. “He’s known for that cross-face cradle. I knew his back was open, so I just took him back and pinned him. I knew he was stuck. He knew he wasn’t getting out.”

“That’s not the technique I teach for that,” Throckmorton said with a laugh, “but it worked.”

It was a bitter loss for the Big Macs but head coach Jeff Havelka believes his team will rally next week in the team tournament.

“I think they stepped up and did a heck of a job,” he said. “We believed in ourselves. I’m not sure how many other people believed we could win this match. They believed and it showed in the way they went out there and fought. Give credit to Waynesburg. They have a great team.”

In the third-place bout, South Fayette got past Trinity, 40-33.

All four teams advanced to the WPIAL Class AAA Team Tournament, that got underway on Wednesday. Waynesburg was rewarded for its victory by being selected as the top seed and was one of four host sites. The Raiders were to face the winner of a preliminary match between Peters Township and Pine-Richland.

The Raiders moved their record to 7-0 in dual meets this season.

Canon-McMillan was without heavyweight, Gio Ramos, who suffered a knee injury three weeks ago and has not wrestled since.

Waynesburg got big victories from Mac Church at 106 pounds, Rocco Welsh at 126 pounds, Cole Homet at 132 and Wyatt Henson at 138.

The first-round bouts were blowouts.