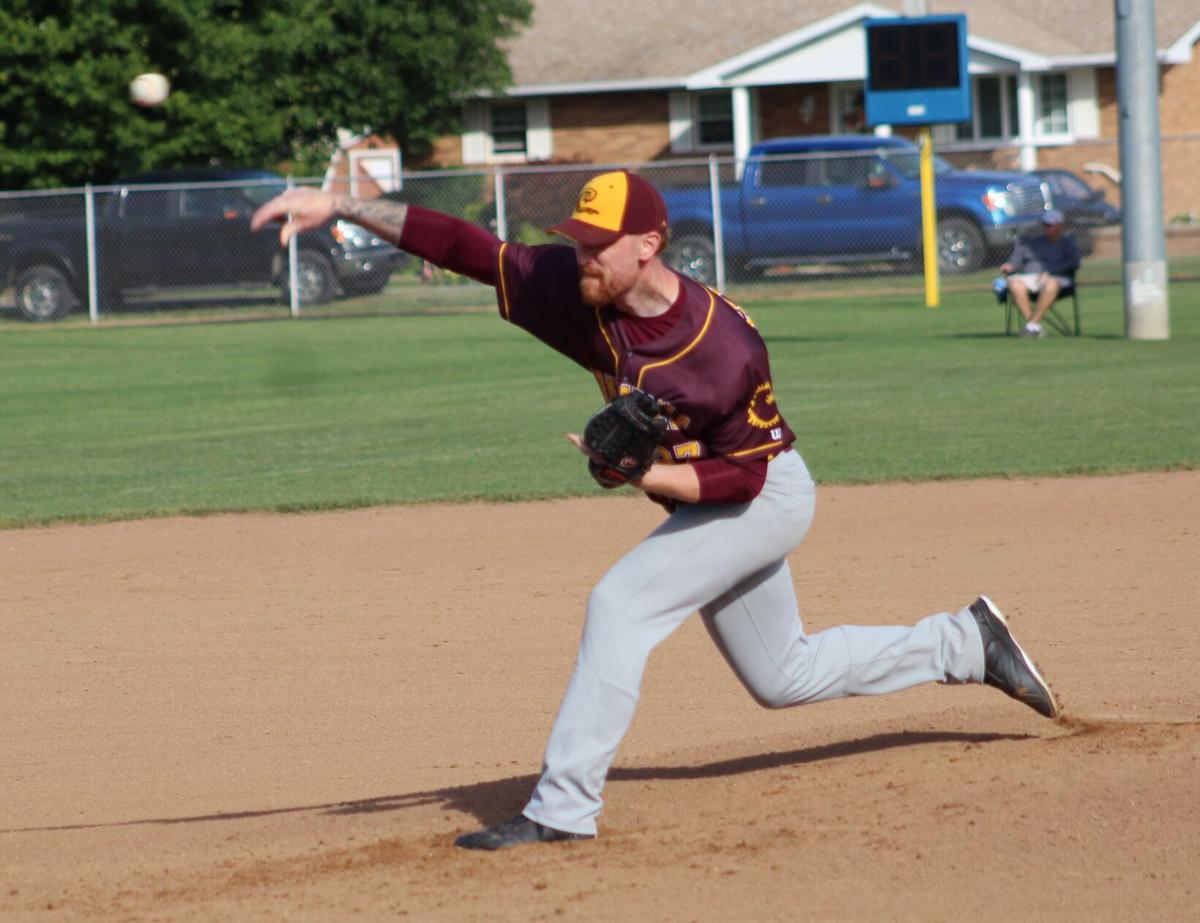 Carmichaels starting pitcher Justin Schrader throws the ball towards the plate in the top of the second inning in a Fayette County Baseball League game against Mill Run at Carmichaels on June 23. 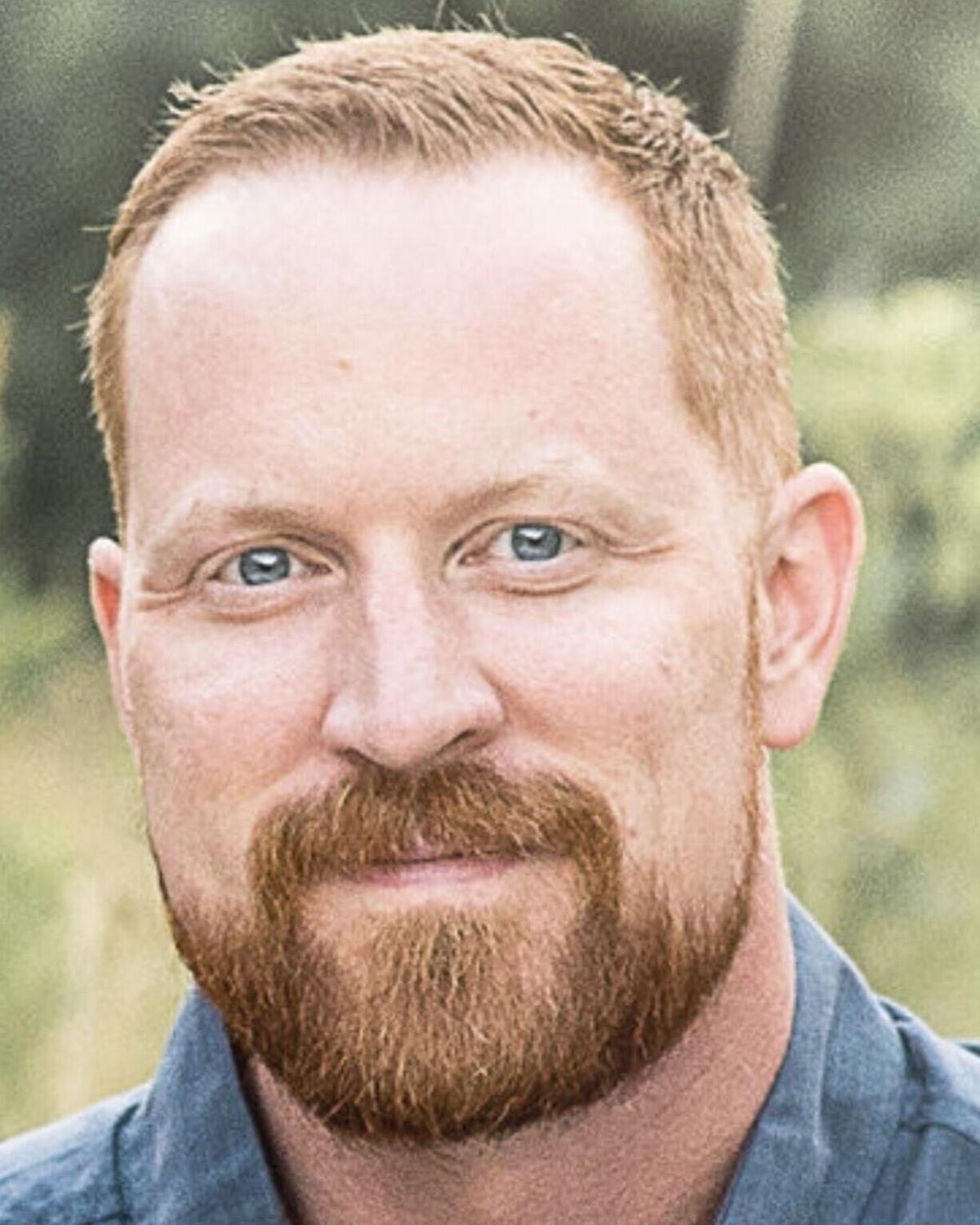 Carmichaels starting pitcher Justin Schrader throws the ball towards the plate in the top of the second inning in a Fayette County Baseball League game against Mill Run at Carmichaels on June 23.

His competitive fire and desire pushed Justin Schrader to give baseball one more try — pitch one more season.

After seven years away from the game, a successful career at Waynesburg University and a stint with the Washington Wild Things in the distant past, he worked on his body – much of the concentration on building strength in his legs.

“I worked out at home,” he said. “I exercised and ran during my lunch hour. I worked my legs hard for six months. It wasn’t easy nor always fun.”

His next step was to contact his old manager and friend, Richard Krause, to see if there might be a spot on the Carmichaels Copperheads, a team Krause has long managed in the Fayette County Baseball League.

“I was sitting in my office and received a text from Justin,” said Krause, baseball coach for Carmichaels High School and professor at Waynesburg University. “I’m pretty busy and I don’t respond to text or voice messages all the time or promptly. I saw it was Justin and I read what it said.

“He asked about coming back to pitch for the Copperheads, which he had done many years before. I couldn’t say yes fast enough.”

Krause didn’t even consider any other details. The seven years in between Schrader pitching for the team simply didn’t matter. The trust between the two and the admiration Krause has for Schrader were enough.

“Justin is very quiet,” Krause said. “I used him as an example for other members of the team so many times in the past. You can’t tell if he’s up or down. But you know he is focused and committed.

“He’s stoic, calm. Justin is just a great person. He always fit in well with my philosophy. When he came to practice, I could see that he was in incredible shape. You don’t get many chances to add someone with his character, resume and background to your roster.

“I figured just to have him around would be a plus and thought if he was anywhere close to his performance and ability before, that would be a tremendous pickup.”

Schrader, a Washington native and Bridgeville resident, returned and threw several bullpens in preparation. He knew, though.

“All the worked paid off,” he said.

Schrader, a right-hander, pitched three games for the Wild Things in 2006 and joined four other Washington natives to play for the local professional Independent League franchise. The others included pitchers Eric Holt, Patrick Sadler and Mike Lucas and infielder Justin Gregula.

That passion, his grit and talent have led him to be a most effective performer for the Copperheads this season.

He pitched the night of July 7 but the game was cut short and incomplete because of weather. The Copperheads were winning at the time.

Schrader’s performance has been nothing less than sensational.

“There were no assumptions,” Krause said.

In the season-opener, Schrader helped Carmichaels to a 10-1 victory over the Fayette Raiders. He struck out nine in three innings.

“I wanted a different culture with the team (this year),” Krause said. “I thought we had been a little casual about things. I wanted to learn the right way to approach the game and to play the game. Justin was a guy who could show the way in terms of preparation, focus and playing to win by doing the things that need to be done to find success.”

Jacob Fordyce, who was an integral part of Carmichaels High School’s team that won a section title, advanced to the WPIAL semifinals and played in the PIAA playoffs this spring, was given a rare chance to catch Schrader in the Fayette County League season opener.

The Mikes’ rising junior was used to catching pitchers around his age, not from a totally different era.

“I had been lucky to catch (him) in four or five bullpens in practice,” Fordyce said. “I was comfortable. I knew he would hit his spots. He did in those bullpen sessions. It seems the older guys set up hitters more and better. I know they don’t miss their spot, at least Justin didn’t.

“I was happy to have the opportunity. I knew he had a good career at Waynesburg and that he pitched professionally with the Wild Things.”

“No, I didn’t know,” Fordyce chuckled. “I was up for the challenge. He threw 77 mph in the bullpen his first day back from a seven-year layoff. It kept going up. It was neat getting to catch him and to just watch him. He is so sound fundamentally. Anyone who watches can learn something from him.”

All in the family

Baseball runs through the bloodlines in the Schrader family.

Justin Schrader and his wife, Ashley, have two sons, Noah, 7, and Silas, 3. Noah is a baseball player, and made his first all-star team this summer.

Jordan Schrader is an advocate for Justin and marvels at the road he has taken.

Justin Schrader was largely overshadowed growing up as a player in Washington Youth Baseball. He had an outstanding 14-year-old Pony baseball season, going 7-1 as a pitcher. He was a member of the 1998 Washington All-Stars, which won three straight games and advanced to the Pony League World Series championship game before losing to Chinese Taipei. That was a year after being just a two-inning outfielder.

At Trinity High School, he thinks he wasn’t given the opportunity to help the Hillers’ varsity until his senior season when he indeed played a huge role, pitching Trinity to key victories and helping it earn a third consecutive section championship.

“There were guys better than me back then (in Pony League),” Justin Schrader said. “I used it as motivation. I wasn’t at the same level as some of my teammates on that World Series team. I always wanted to be the best. I do feel maybe I was a late bloomer.

“I continued to develop as I got older. In college, Mark Mason, my pitching coach at Waynesburg, really helped. As I progressed with my fastball, we worked on control and command. Every stage of the game, I just worked to get better.”

Jordan said it’s his brother’s will and desire that makes a difference.

“Justin was so low key some people didn’t even know he played baseball,” Jordan Schrader said. “His baseball story is amazing. He went from almost quitting when he was 12-years-old to playing 20 more years that included college, pitching (professionally) and winning countless games in the Fayette County League.

“Justin never had the opportunity to shine at Trinity. He never gave up or gave in, and always worked hard. I’m proud of his accomplishments. He never wants to take credit for what he has done.”

Sadler, 38, says Justin Schrader is to be admired for his persistence and work ethic and for coming back after a seven-year layoff.

“He’s a better man than me,” Sadler laughed. “I’m not going back. I have been asked but it is not happening.

“Anyone who has that will and drive is to be complemented. I knew the family growing up, we lived down the street. Baseball is in their blood. Justin seemed to always be overshadowed. He never backed down.

“We were in the same art class (at Trinity), and we sat at the same table,” Sadler continued. “In one of our conversations, we both said we wanted to play baseball at the highest level possible. We took different paths. But to play in college and professionally, it is a dogfight every day. No matter how good you think you are or not as good in somebody else’s mind, it is a constant battle. I give him a lot of credit.”

“Honestly, knowing Justin, it doesn’t surprise me,” Gregula said. “Justin is so focused, so committed. When I came to the Copperheads to play shortstop after my freshman season at Old Dominion, I walked onto the practice field and see this 6-foot, 4-inch mammoth of a man. I realized it was Justin.

“He always worked on his craft. He watches and studies baseball, really studies it. Justin loves baseball so much. What a treat to play with him. I know the family. It’s a baseball family, like mine. In my opinion, he was probably one Division-I pitching coach and maybe one pitch short of pitching at a very high level.”

Gregula ought to know, he played with Justin Verlander, a surefire baseball Hall of Famer, and Daniel Hudson at ODU. Both are World Series champion pitchers.

“I know to get back, he must have put himself through some rigorous work,” Gregula added. “When you love baseball like Justin does, he wanted to have the chance to compete again, to be good. It’s a heartbreaking feeling when you can’t play anymore.”

Two particular moments will stay with Justin Schrader after his playing days end.

“My son had a game the night I came back and even though I wanted him to see me pitch, I told him he had to play his game because he had teammates counting on him,” he said. “Jordan filmed me, and Noah got to watch me on video. He was smiling. He’s seen me pitch live since.”

The other involved his father, who was a longtime manager and coach in Washington Youth Baseball and the organization’s president. He served in other roles for many years and coached Washington Pony League World Series teams in 2000 and 2005.

Don Shrader was inducted into the Washington-Greene Co. Chapter of the Pennsylvania Sports Hall of Fame in 2006 for Youth Service.

“Playing for the Wild Things was a wonderful experience,” Justin Schrader said. “I remember coming out of the bullpen to pitch in front of people from my hometown as a professional. My dad saw me run across that field and he was a very proud father. It’s something he and I will always remember.

“He loved watching all of us play. He got emotional that day. My parents are great people. I always wanted to be like my dad.”

Krause, who helped form the Fayette County League and has managed the Copperheads many years, said Schrader’s return has been an “absolute joy.”

“For him to come back, it’s been amazing,” Krause said. “This is all about the relationships you build and the friendships you make.

“Justin coming back to pitch after seven years, has been really cool for me.”

And for everyone else who knows him.

John Sacco writes a bi-weekly column about local sports history for the Observer-Reporter.

John Sacco writes a bi-weekly column about local sports history for the Observer-Reporter.