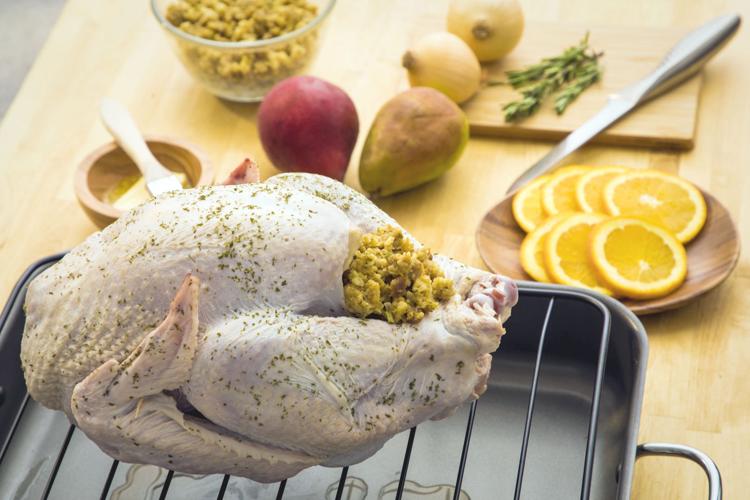 Heidi McClean, director of dietary at Highlands Hospital in Connellsville, says stuffing should not be placed into an uncooked turkey until just before it will go into the oven to be roasted. 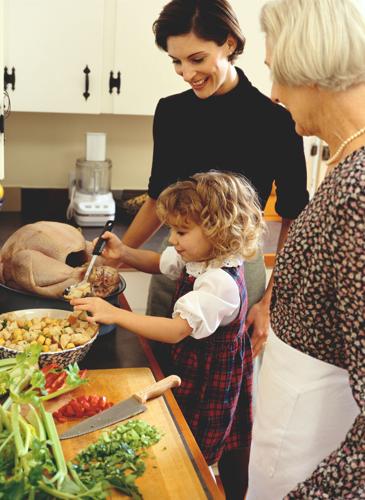 Carrie Masterson, who teaches a ServSafe certification course for Penn State Extension, said raw turkey should always be kept separate from ready-made foods or their ingredients to ensure safety.

Heidi McClean, director of dietary at Highlands Hospital in Connellsville, says stuffing should not be placed into an uncooked turkey until just before it will go into the oven to be roasted.

Carrie Masterson, who teaches a ServSafe certification course for Penn State Extension, said raw turkey should always be kept separate from ready-made foods or their ingredients to ensure safety.

Holiday meals are just around the corner and food safety experts say preparedness and education is key to serving up safe choices this season.

Purchasing, storing and thawing the Thanksgiving turkey is the first thing most meal preparers will need to think about.

Heidi McClean, director of dietary at Highlands Hospital in Connellsville, said it’s important to begin this process at least a week before feast day.

“Turkeys must be kept frozen until you are ready to start the thawing process, and this can be problematic due to the space in the freezer a turkey requires,” she said. “However, the trunk of your car, garage, or porch are not safe places to store a turkey. When a turkey is in the danger zone of 40 degrees to 140 degrees Farenheit, bacteria that can cause food-borne illness to start to grow.”

However, Carrie Masterson with Penn State Extension who teaches a ServSafe certification course, said that the actual process of buying the turkey is where individuals should first begin to be vigilant.

The way that some grocery stores display their turkeys in the floor freezers out in the aisles can be problematic.

“I’ve seen where turkeys have been stacked up in pyramids in those freezers and that really presents a risk factor because the ones on top are further away from the freezer,” she said. “If you can even slightly indent the turkey when you push on it, that’s a problem.

“I’m the one who digs down to the very bottom of the display to get my turkey,” she added. “When you’re buying your turkey, it should be rock solid frozen.”

McClean said there are actually two ways to thaw a turkey - the refrigerator method and the cold water method.

For the refrigerator method, the turkey should be placed in a pan large enough to catch any leaks and placed in your refrigerator.

Masterson said placement of foods in the refrigerator is also something that should be planned out.

The reason for the order, she said, is because raw poultry is usually cooked on settings usually higher than the other meats, so if anything were to drip down onto the food below it, the cooking temperature of that food would be high enough to kill any bacteria that could cause food-borne illnesses.

The United States Department of Agriculture (USDA) recommends that for every 4 to 5 pounds of turkey requires a full 24 hours of thawing in the refrigerator.

So for an average turkey of 16 pounds, the bird should be thawed in the fridge for about 4 days.

From there, Masterson said after the recommended days needed for the actual thawing of the turkey, it should be cooked within two days.

“If you begin thinking about thawing your turkey early enough and have the space in your refrigerator, this is the method to use,” said McClean.

The second possible method is the cold water method.

McClean said the turkey should be left in its original wrapping and be placed in a sink full of cold water, but the water must be drained and replaced every 30 minutes.

“The rule of thumb for this method is roughly a half hour per pound for thawing time,” she said. “When the cold water method is used, the turkey must be cooked immediately after it has thawed. You should not place the thawed turkey in a refrigerator and cook it the next day.

“If you do not start refrigerator thawing your turkey early enough, or do not have adequate space in your refrigerator to thaw it, this is the method to use,” McClean added.

From there, the preparation of the turkey also requires some precautions.

Masterson said it is very important to keep raw poultry separate from ready made foods or their ingredients.

“You want to make sure that when you’re preparing the raw turkey that you are very careful not to splash or spray any of the raw juices onto other foods or surfaces that other foods will come in contact with,” she said.

“If any parts of the raw turkey come in contact with any surfaces, those surfaces need wiped off then washed with soap and warm water and then sanitized,” Masterson added. “It’s really best to prepare the ready-to-eat foods before you prepare any raw foods to decrease the risk of cross contamination.

McClean added that poultry contains harmful bacteria that are destroyed during the cooking process, however, problems can arise when the juices from raw poultry come into contact with surfaces and utensils and contaminate foods that do not require cooking.

She added that despite the old practice of washing a turkey before cooking, this is not recommended due to the risk of cross-contamination.

“It is important to wash your hands and all surfaces that have been in contact with the raw turkey or it’s juices,” McClean said.

If you choose to stuff your turkey before cooking, it is important that this is done just prior to roasting it.

“Although it would be convenient to save some time Thanksgiving morning, stuffing should not be placed in the uncooked bird until just before you are ready to roast it,” McClean said.

“Stuffing should be placed in the turkey’s cavity loosely, rather that tightly packed, in order to ensure that the innermost stuffing reaches proper temperature to kill any bacteria,” she said.

Masterson said she usually recommends not to stuff the turkey, but rather cook the stuffing separately on a side dish.

As for cooking the turkey, McClean said most turkeys are equipped with a pop-up timer, which are usually pretty accurate, but Masterson said it is so important to purchase a food thermometer and make sure that the thickest parts of the breast, the innermost parts of the thigh and wings and even the stuffing has reached a temperature of 165 degrees.

“If a turkey is stuffed, it actually might take more time to bake,” Masterson said. “If the thermometer is showing the meat is at 165 degrees, that doesn’t mean that the stuffing has reached that temperature, so it’s very important that you open up the legs and insert the temperature probe deep into the stuffing as well.”

McClean said for those that do not own a meat thermometer, they are inexpensive, and can generally be purchased for less than $10.

“This is a small price to pay to prevent an outbreak of food borne illness at your holiday gathering,” she said.

It isn’t unusual for a family gathering to include a table full of food that is left out throughout the day for people to “pick” at, but McClean said this is the most concerning thing when it comes to food safety.

“It seems rude, and after all of the time it took to prepare the food and cook the food it’s hard to think about putting it away just a half hour later when everyone is finished eating, but that is the most safe practice and should be taken very seriously,” she said.

McClean said excess leftovers may need split into smaller batches to ensure that they reach a cooler temperature quicker and all remaining stuffing must be removed from the turkey’s cavity and stored separately in the refrigerator for this same reason.

Masterson said it’s important to discard any turkey, stuffing or gravy that has been left out for more than two hours. Otherwise, all leftovers should be stored in the refrigerator and eaten with three to four days.

If turkey is put in the freezer, she said it’s important for the food to be eaten within two to six months.

McClean said when someone is warming up leftovers, it’s important that they are reheated to the same 165 degrees in order to destroy any harmful bacteria that might have begun to grow before the leftovers were chilled.