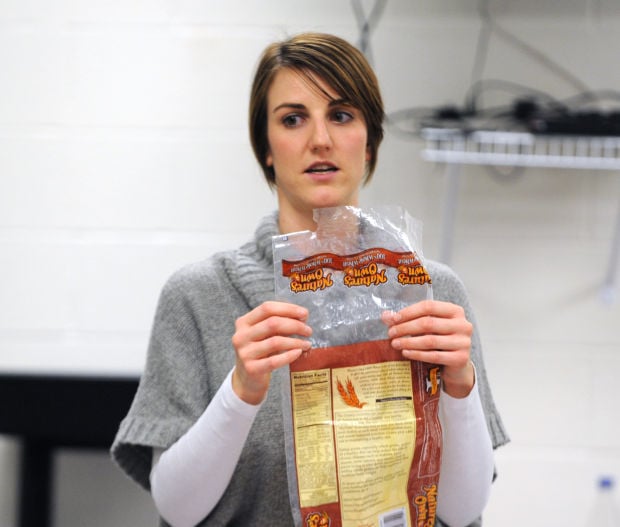 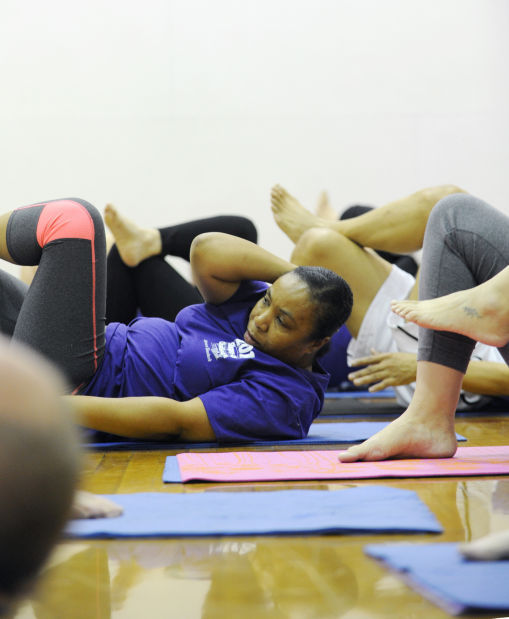 Joyce Thornton does a set of crunches during a cool down session at the Shape-Up Challenge. 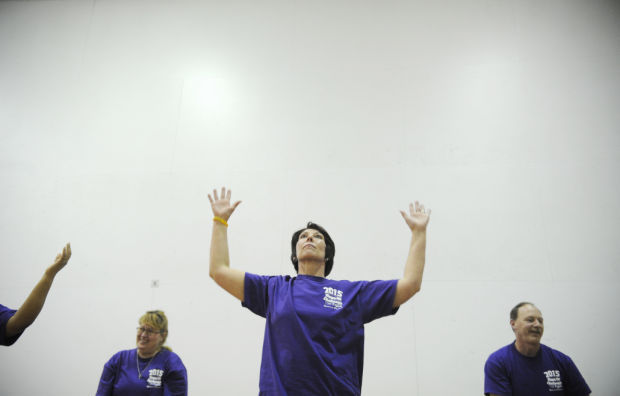 Pam reaches in the air during the Shape-Up Challenge group’s exercise session. 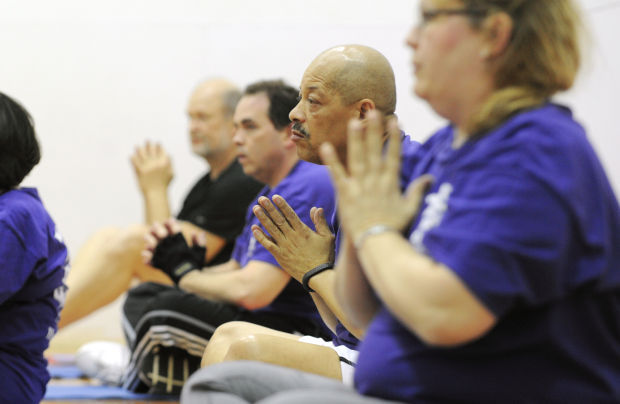 Darryle Thornton and the Shape-Up Challengers finish their workout on a peaceful note. 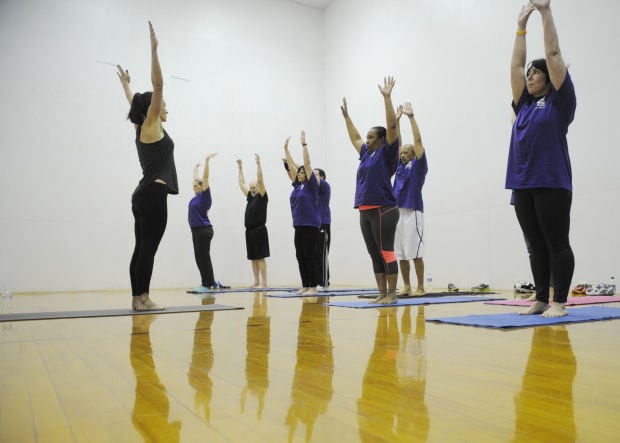 The Shape-Up Challenge group does an active yoga routine for their workout of the week.

Joyce Thornton does a set of crunches during a cool down session at the Shape-Up Challenge.

Pam reaches in the air during the Shape-Up Challenge group’s exercise session.

Darryle Thornton and the Shape-Up Challengers finish their workout on a peaceful note.

The Shape-Up Challenge group does an active yoga routine for their workout of the week.

All eyes were on dietitian Jessica Marshall to kick off the fifth week of the Shape-Up Challenge.

In regards to fiber, Marshall reiterated that the contestants should consume 35-45 grams of fiber per day.

“Fiber will make you feel full longer, which will make you eat less. It will keep you regular, and it also helps to take some bad cholesterol away from your heart,” she said.

It would be wise though, she added, to increase fiber intake gradually and with an adequate amount of water to avoid gastric distress.

When it comes to knowing which fats are good and which are bad, Marshall provided the contestants with a helpful hint. She told them to avoid four-legged fats, such as beef or pork. Two-legged fats such as chicken and turkey are OK, while no-legged fats are the best to consume. These include avocado, olives, fish and olive oil, among others.

Marshall also highlighted lunch ideas and passed out recipes for multiple salads, and suggested that the contestants should make their own salad dressings to avoid excessive fats. Other recipes included chickpea and kale stew and the classic peanut butter and jelly sandwich on whole wheat bread. Marshall suggested that jelly be replaced with fruits such as a banana or strawberries, and peanut butter be swapped out for almond butter.

“It is very hard to find a good bread,” Marshall said. “It has to say ‘whole wheat’ on the front of the package. The very first ingredients listed make up the majority of the product, so you have to make sure the first ingredient is whole wheat.”

Marshall also said it is difficult to find a bread without sugar, but she prefers sugar over corn syrup. The fiber content listed must also be at least three grams for the bread to truly be whole wheat.

Also relating to the nutritional facts, Marshall said the 20 percent rule could be used as a quick reference. The contestants were told to aim for labels with 20 percent or less of the “bad stuff” such as sodium.

A few of the contestants expressed concerns for dealing with cravings.

Marshall sympathized and encouraged the contestants to continue to fight to change their eating habits.

“Eventually you won’t crave that stuff,” she said. “You really can retrain your taste buds. I promise it’s possible.”

The last time Marshall met with the group was during week four to discuss the importance of breakfast, the glycemic index and consuming nutrient-dense foods.

The majority of the contestants took her advice. The Kumors reported that they tried quinoa, the Leskinens gave kale chips a try and the Thorntons tried raw honey and ground flax seed. Marshall is scheduled for one more visit with the contestants to discuss dinner tips and suggest helpful kitchen appliances.

Following the presentation, the contestants met for their weekly group workout when they were introduced to PiYo. PiYo Live was taught by Laura Kearns who has worked at the YMCA for two years.

“PiYo is yoga- and pilates-inspired. It combines the muscle-sculpting and core-firming benefits of pilates with the strength and flexibility of yoga,” she said.

Kearns described the 30-minute class as low-impact and focusing on personal body strength to tone and strengthen the body.

“I think they did great,” she said. “They all stuck with it. They tried everything, even though some of the poses are challenging.”

Completely devoted to the Shape-Up Challenge and always game for anything the trainers throw his way, contestant Larry Kumor is ready for a total body and lifestyle change, for not only himself but also his family.

Great suggestions Jessica. I hope this article gets people looking at those ingredient labels! I might add that azodicarbonamide found in a lot of these "supermarket breads" along with other dough conditioners are also ones to avoid!

Nature's Own? Get outta town! This and many other breads do have the azodicarbonamide just like a yoga mat or "flip-flops" do.
Also avoid: Caramel color (contains carcinogenic 4-MEI in some cases)
When speaking about dietary needs, oils are a huge component of your well being.
I would suggest eliminating all trans fats from your diet. Any food with Partially Hydrogenated Oil is one to avoid!!!! Never eat this again and persuade the food brands to get it out! Is Canola oil healthy? What is canola actually? Canadian Oil Low Acid! It is a low grade oil better used as an emulsifier in paint than in humans for food. Many seed oils disrupt enzymes in the body, soybean oil or "vegetable oil" is a prime example of an oil that will bog down your thyroid and make you gain weight, unhealthy indeed! The problem stems from unhealthy polyunsaturated fats. The human body gets actually produces energy from healthy saturated fats like coconut oil. Although saturated fat from these sources got a bad rap in the past, don't believe it! Healthy plant based saturated fats in moderation make you lean and healthy. Some people wouldn't need the statin drugs or other drugs pushed by their physicians if they lowered their cholesterol by watching which oils they consume. I recommend organic coconut oil, organic palm fruit oil, great choices for cooking. Also I feel organic animal fats in moderation, and whole milk rather than 2% all can be ingredients in a healthy and balanced yet fulfilling meal plan. Some of the unique acids in whole milk can lower cholesterol. I must stress any trans fats which are man made are the only type that will raise BAD cholesterol. Do not consume ANY no amount is safe help rid our nation of these awful foods. From AZODICARBONAMIDE in your yoga mat to canola oil in your paint, Get these substances out of food and back into only our durable goods where they belong!!!!!! Just a thought.