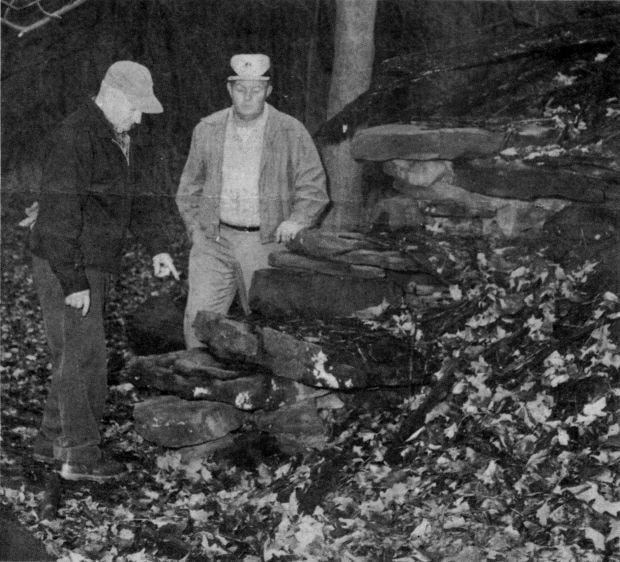 Forest West and his son Olan examine the spot of a makeshift grave along Pumpkin Run Creek where Debra Makel’s body was found on Oct. 7, 1973. Forest West participated in the search party for the child. (Herald-Standard archive) 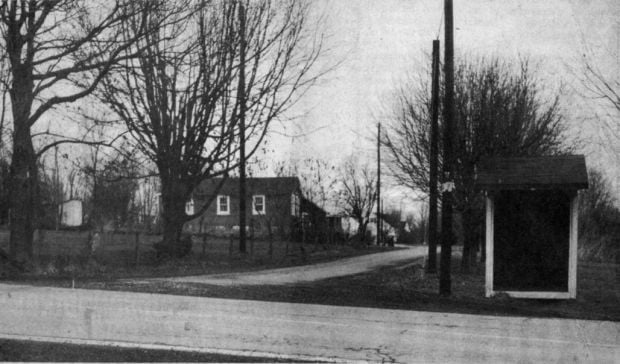 Debra Makel’s home (white house in center) is pictured down the road from the shelter where she got off the bus on Oct. 5, 1973. Her body was found in a shallow grave near Pumpkin Run Creek, which is a 10-minute walk from the Makel home. (Herald-Standard archive)

Forest West and his son Olan examine the spot of a makeshift grave along Pumpkin Run Creek where Debra Makel’s body was found on Oct. 7, 1973. Forest West participated in the search party for the child. (Herald-Standard archive)

Debra Makel’s home (white house in center) is pictured down the road from the shelter where she got off the bus on Oct. 5, 1973. Her body was found in a shallow grave near Pumpkin Run Creek, which is a 10-minute walk from the Makel home. (Herald-Standard archive)

Charlotte Makel, 67, pauses for one, two, three seconds — eyes closed — and then opens them, her voice steady despite her furrowed brow.

Duane Makel, 72, stares at the ceiling, finding a spot over his wife’s head, and listens as she speaks about the death of their daughter.

The couple has endured in the same home that they shared with their beloved Debra Lynne Makel, who went missing from the residence more than four decades ago. And the couple remains in the very same home that sits about a 10-minute walk from where the 8-year-old giggly blonde, who loved to dance and was an excellent student, was found raped and strangled.

“She was just the perfect girl,” Charlotte Makel said. “Every parent thinks their child is perfect but she was.”

Debra Makel was last seen at 3:45 p.m. Friday, Oct. 5, 1973, when she walked up her driveway toward her single-story home after getting off the school bus.

Trooper John F. Marshall, who oversees cold-case investigations for the state police station in Uniontown, said that Duane Makel, who taught at Avella High School, and Charlotte Makel, who worked in a clothing factory in Nemacolin, reported their daughter missing that afternoon, launching what would become the largest search for a missing person in Greene County history.

Charlotte Makel said that she had hired a teenage girl to sit at the house with her children until she got home about 45 minutes after the school bus dropped them off each day, but said that the short-term baby sitter fizzled out, coming less and less frequently. The baby sitter was not at the residence the day of Debra Makel’s disappearance and Debra Makel’s brothers had not ridden the bus with their sister because they were canvassing the neighborhood selling magazine subscriptions.

The search continued throughout the weekend, and on Sunday morning, two of Debra Makel’s cousins found her body buried amongst some logs and debris in a wooded area known as Pumpkin Run.

Police determined that the girl had been raped and then strangled — her killer using a piece of twine around her neck — causing her larynx to break, Marshall said. The case then shifted to a criminal investigation, he said.

The Makels said that their first reaction was shock.

Charlotte Makel said that people at that time were less concerned about “that kind of stuff” than they are today, because, as Duane Makel said, “it was a different time; a totally different era.”

Marshall said that police investigated and interviewed more than 1,000 people regarding Debra Makel’s homicide but were unable to identify a primary suspect. A handful remained through the years on a list of possible suspects, but none was solid enough to warrant charges.

Charlotte Makel said that through the decades but especially in that first year of feverish investigation, police were respectful of her family and were as comforting as the situation would allow.

“For the first weeks, first months first years, we were very concerned about our safety and why this had happened,” Charlotte Makel said, adding that she and her husband did not have any known enemies, but were worried for the protection of their sons following their daughter’s abduction and slaying. “We had no answers to anything. Who? What? Why? We would have sold our souls at that time for answers.”

“You don’t ever relax, never as you were before,” she said.

The Makels said that they did initially fear that the suspect might be among their fellow residents, wondering about unfamiliar faces in the grocery store or at the gas station, but said that as time passed they grew less wary of those unknown neighbors and more convinced that their daughter’s killer came from outside their small community.

“We knew and saw that we didn’t have enemies, we had friends,” Charlotte Makel said. “It was a random event. It had to be.”

Marshall said that in the last decade, all the physical evidence collected at the scene has been submitted for DNA testing, which was not available at the time of the child’s death.

Marshall said that a DNA profile of “someone” was discovered on items of evidence, but, the profile does not match anyone in the FBI’s DNA database. He said that could change in coming months as he starts to re-interview three possible suspects in the long-cold homicide.

But the Makels said that after 40 years of lost leads, broken trails and unconfirmed suspects, they aren’t going to get their hopes up too much that their daughter’s killer will be identified.

Duane Makel said he has learned to cope by “trying not to talk about it too much,” while his wife, not letting her hopes get too high, says she still holds onto a shred of promise that she might get some of the answers she has yearned for all these years.

“It is in my thoughts, every day,” she said, closing her eyes. “I do hope, still to this day.”