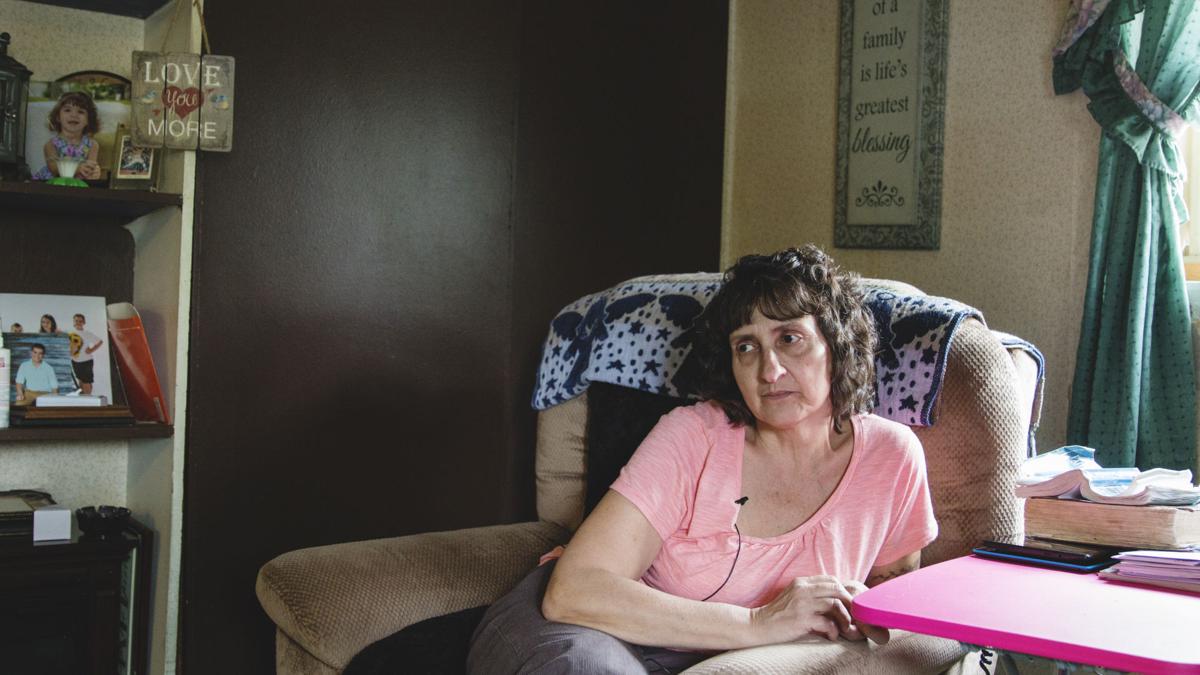 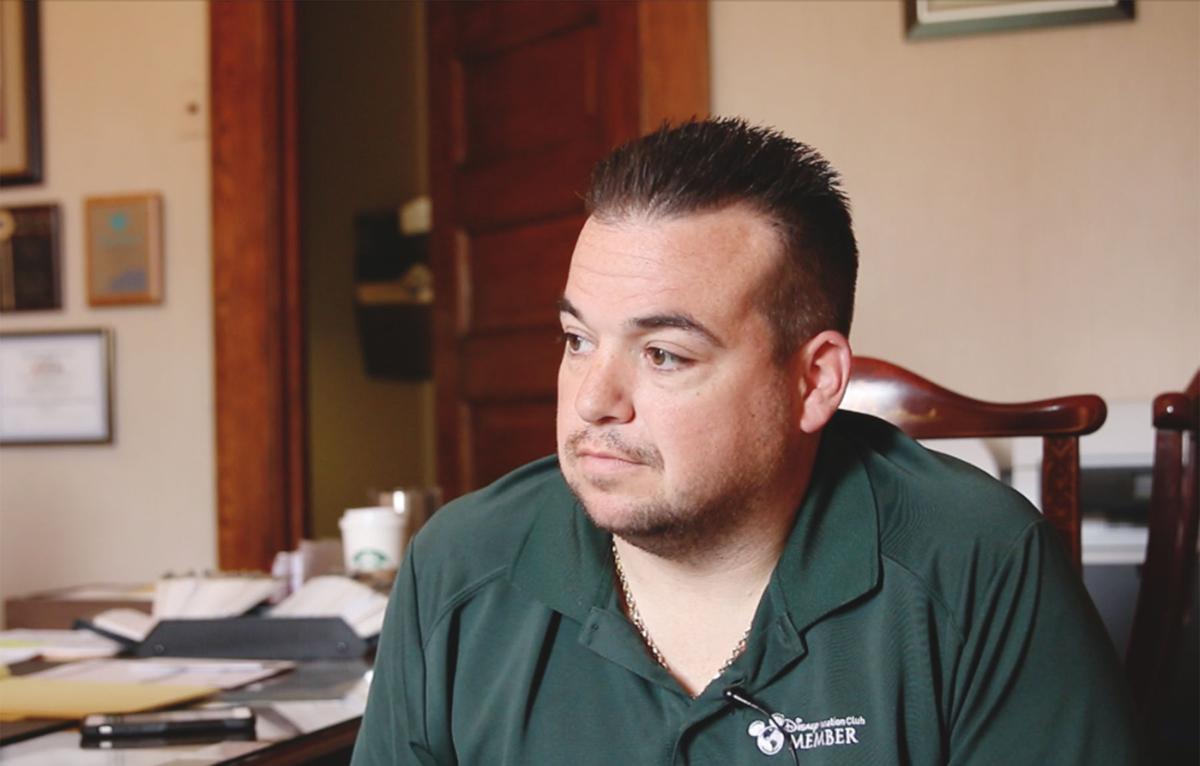 Eric Dolfi, owner of Thomas M. Dolfi Funeral Home in Uniontown, said he has seen the increase in funeral services due to overdoses. Dolfi said he sees both sides of the equation as he too has a brother who suffers from addiction. 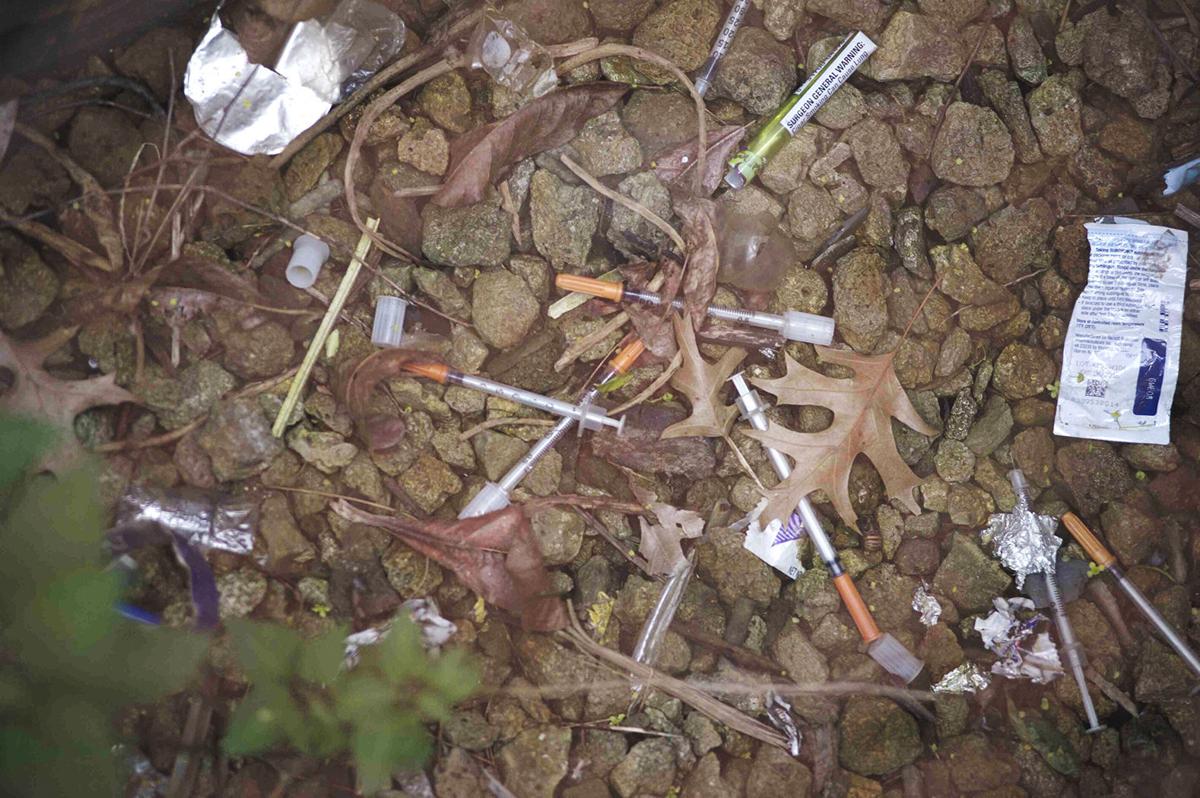 Discarded used needles lay in a front of the basement window at First Lutheran Church in Washington, Pa., on Thursday, May 4, 2017.

Eric Dolfi, owner of Thomas M. Dolfi Funeral Home in Uniontown, said he has seen the increase in funeral services due to overdoses. Dolfi said he sees both sides of the equation as he too has a brother who suffers from addiction.

Discarded used needles lay in a front of the basement window at First Lutheran Church in Washington, Pa., on Thursday, May 4, 2017.

Today and yesterday marked the beginning of a monthly series probing the financial and emotional costs of overdose deaths. The articles will look at the toll paid by those who have lost loved ones to addiction, as well as those who help treat or respond to it. We welcome reader feedback as we continue to probe this difficult subject.

After a Scottdale man died Feb. 13 from a suspected heroin overdose, his mother was faced with an excruciating decision about whether to cremate her son’s body to save money.

“He called me his hero and I called him my rock,” said Sarah “Sally” Darrell of her son, Tommy Darrell.

The Connellsville mother was able to give her son a traditional burial with the help of crowd-sourced fundraising on GoFundMe and his company savings account. The 40-year-old worked for R&B Contracting & Excavation in West Mifflin and saved a portion of his earnings for his future. Once those funds were released, the money Darrell was earning and saving paid for his own funeral.

“It’s so sad. It’s sickening to think about,” his mother said.

He had two vehicles, both in his mother’s name. While she wanted to keep her son’s truck, partially for its sentimental value, he still owed money on it, and she was forced to sell it.

A family plot had already been purchased at Green Ridge Memorial Park in Pennsville, intended for an older family member. Sarah lost many members of her family far too young. Her father died when she was a young girl. Her husband was killed when she was 21. Only four of her eight siblings are still living. And now her son is buried next to his uncle.

Sarah plans to apply for a grant through the Baseball Assistance Team to pay for her son’s headstone, which would cost about $2,000 for a basic marker. She is hoping she can secure funds for a nicer headstone with a photograph of Tommy, the professional baseball player who was once known for beating addiction.

She said her work could not stop for the unexpected death. Five of the 15 employees at a personal care home where she works are family, and having one-third of the company absent would leave it dysfunctional. So, for the first time in four years, she took a week off to mourn her child, and then returned.

“When reality sets in, it gets a lot harder. It still doesn’t seem real,” she said.

Tommy spent about a decade of his adult life playing professional baseball in the minor leagues. He also served time in jail, following a run-in with the law due to drug use. While his most recent years were spent close to the family and working with others in recovery, she said it would be easy to pretend he was just away for a time, playing with the minor leagues again, or even serving a jail sentence.

“This was a shock to us. We really thought he had it beat this time,” she said.

Darrell was clean for 2 1/2 years before he was found dead in his apartment. It takes approximately eight to 12 weeks for toxicology results to be returned, but his mother suspects heroin laced with fentanyl or carfentanil will be among the toxins.

“He did not have needle marks all over him, either. There was one. One. I think there was poison in there,” she said.

Although she has waited for more than two months to learn why her son died, she said she expects no closure from answers the day the results are released.

“I think it will be a horrible day. It’s something we have to face,” she said. “Nothing in that report is going to bring him back, and I don’t see any of it making sense.”

Twenty-one people died in Fayette County of a drug overdose in 2017 as of April 25, according to the Fayette County Coroner’s Office. Many of those died from a lethal combination of prescription medications, or from a mix of heroin and fentanyl, an opioid used to treat severe pain that can often be found in stamp bags lacing or replacing heroin.

Eleven of those deaths are catalogued on an online database, OverdoseFreePA, which collects data from coroner’s offices throughout the state and displays numbers as of March. Four of those died in the Uniontown area, and three died in the Connellsville area. The youngest two people to fatally overdose in 2017 were 23, and the oldest two were 63. Toxicology results indicated fentanyl was present in six cases, heroin was present in three, and the remaining overdoses showed levels of prescription medications.

In 2012, the first year data was available, 12 people died in Fayette County of a drug overdose. The numbers more than doubled the next year with 27 overdose deaths in 2013, then continued to increase with 36 overdose deaths in 2014, 41 in 2015 and 60 in 2016. The majority of those who died in 2016 were 45 to 54 years old, accounting for 35 percent of the deaths. Fourty-five percent of toxicology tests indicated fentanyl was present in the system, and 35 percent indicated heroin was present. Other toxicology results tested positive for cocaine, alcohol, prescription pain medications, anxiety medications, and methadone, a drug used to treat opiate addiction.

Fayette County Coroner Dr. Phillip Reilly declined to comment personally for the article, saying he is preparing a report for the Fayette County Commissioners about the cost of overdose deaths.

Greene County Coroner Gregory Rohanna said the majority of overdose deaths in his county is due to prescription drug abuse that began with either a valid prescription or stealing from family members.

“Everyone classifies a drug overdose as a heroin overdose,” Rohanna said. “We don’t normally see that in Greene County.”

For about a decade, overdose deaths numbered between 10 and 13. Rohanna witnessed the first spike between 2015 and 2016 when the number jumped from 14 to 19, an increase of about 26 percent.

“It raises our case numbers that we’re investigating, without a doubt. But it’s only five. It’s not like we’re talking thousands of deaths,” he said.

He said the budget does not currently allow for software to track deaths. The coroner does not employ office staff, so he is cautious about adding systems that could result in redundant efforts and add to the taxpayer burden.

Investigating a natural death is typically simple, with medical history on hand, Rohanna said. Any unnatural death requires more investigative hours. About 60 to 70 percent of that time is spent immediately after the death call and in the following several days. When toxicology tests are returned and new information is revealed, more investigation may be necessary to determine — for example — why certain drugs appeared in the system if they were not on the scene, what other prescription medications the deceased took or where they bought the drugs.

“Obviously, if we walk onto a scene and somebody has a needle in their arm, we’re probably suspecting something there,” he said, adding that medical confirmation, such as toxicology results, is still necessary.

Rohanna, who also serves as secretary/treasurer of the Pennsylvania Coroners Association, said many coroners offices have been hit harder financially by increases in overdose deaths.

“You take our little bucket, compared to Washington or Allegheny or Westmoreland, ours is a smidgen,” he said.

Coroners determine whether autopsy and toxicology tests are necessary to determine the cause and manner of death, but performing these tests is typical, he said. These tests typically cost between $2,000 and $3,000. Sometimes, further testing is necessary. In other cases, coroner’s inquests are performed to determine the cause and manner of death. The judicial inquiries require costs for dictation, jurors, the District Attorney staff, judge and courtroom staff. While Rohanna said no inquests have been performed in Greene County for overdose deaths, the costs, including man hours, reaches several thousand dollars.

Eric Dolfi, owner of Thomas M. Dolfi Funeral Home in Uniontown, often learns long before toxicology results are completed that a death was likely an overdose.

He considers community ties to be the focal point of his business. So it’s no secret that his brother struggles with addiction, and families are often open in return.

“It gives a sense of comfort to them, to know we’re dealing with the same thing,” he said.

He said in many instances, the deceased leaves behind a trail of debt. He described one case in which the person who overdosed took “everything that wasn’t nailed down” from the parents. Suddenly, they were forced to scrape up funds for a funeral.

“Realistically, it’s up to the loved ones that have to come up with something, and sometimes it’s a difficult situation,” he said.

Raising money for expenses through GoFundMe has become common practice. But the fundraising rarely covers funeral costs. In those cases, staff often look for cost savings on vaults, coffins or in other areas, even if the family must resort to “scratch and dent” sales, or purchasing a cloth-covered casket. He said families sometimes go on payment plans to cover funeral costs.

Cindy Butler of Connellsville learned through support groups how long the financial impact of an overdose can last. Her son, Jeremy, died of an overdose in 2010 at age 34. He had a small life insurance policy through his employer, which paid for funeral costs. He did not leave behind a mountain of debt or young children to raise, like many of those in Cindy’s support groups.

“Most of the time, when addicts pass away, they’ve not only depleted their family of money by robbing and stealing, but adding onto that funeral costs. It made me grateful that things could have been a lot worse, financially. I’m truly a minority,” she said.

Jeremy began using drugs recreationally in school. After several years clean, he began using pills and fatally overdosed on a combination of alcohol and prescription medication. His brother, Jason, started using legal painkillers after a sports injury, then became addicted. He has been clean nearly three years after losing his left arm and left portion of his torso to abscesses caused by “dirty needles.”

She said supporting her living son, now that he is clean, cost more than her deceased son’s addiction ever did.

“If love was enough, they wouldn’t be addicted,” she said, speaking of both her sons while they were in active addiction. “I loved them, yes, but I didn’t like them.”