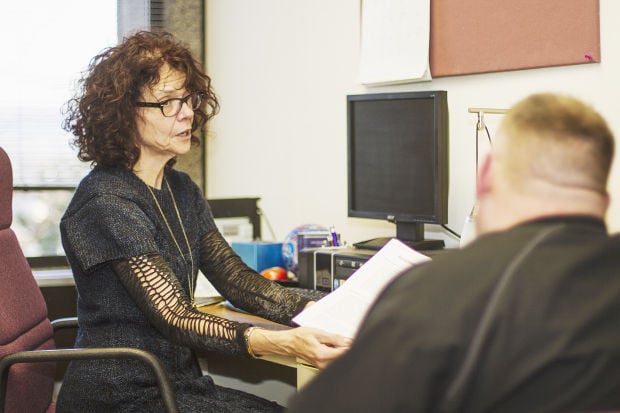 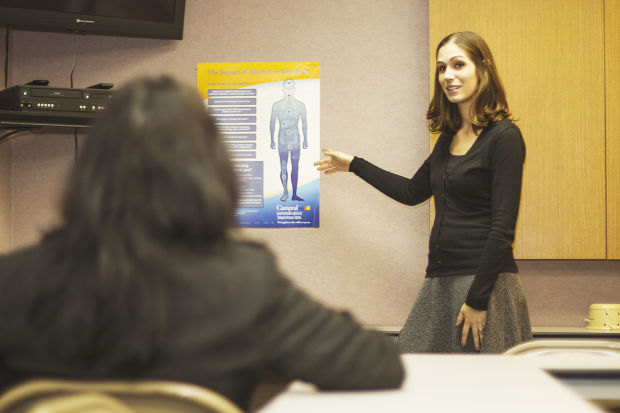 This article is part of a continuing series of articles examining illegal drugs in Fayette County.

The song by the Belgian rock band strikes a chord about the highs, lows and self-denial of addiction.

Anyone who ever has been seduced by chemicals knows the feeling — the choice of quitting becomes harder and harder until life is measured more by irresponsible choices made to feed that addiction. Self-deception about the ability to quit, that it’s not a habit, prolongs the high until users seek help, possibly from places such as the Fayette County Drug and Alcohol Commission.

“People have used chemicals for years,” said Elaine Stano, a treatment specialist for the commission. “The problem is when people get addicted to them, they lose the ability to be able to control what they are doing. Plus, some people use drugs, and they make bad decisions. Bad decisions are not only made by alcoholics or addicts, but those who abuse chemicals. They interfere with how you make a decision and, for some people, it can become pretty tragic.”

Stano said no one chooses to become an addict or an alcoholic, but the increased reliance on mind-altering chemicals makes the choice to quit harder.

“They are floored that it is so difficult for them to move away. Part of that is the total physiological addiction that happens, but also the psychological,” she said.

Once an addict has crossed that line from having a drink after work or pills, maybe something illegal that is more potent, then feeding the addiction becomes a job.

“Please understand that every addict or alcoholic, their goal is not to be an alcoholic or an addict,” Stano said. “Their goal is to use that chemical to get through the day. But what happens when tolerance builds in and now six beers just doesn’t do it any more, but 12 or 18 or 30? Then it’s a fifth of alcohol. Then it gets to be work in order for me to get through the day down this path that I’ve taken.”

Addiction is an illusion about the sense of control and well-being. Opiates can be particularly addictive.

“One thing we know about opiates is that they give you that sense of well-being,” Stano said. “And what a lot of people miss when they don’t take opiates anymore is that feeling of being OK, having energy. If you can imagine living for months and years and being able to take a pill, have that pill allow you to go through your day so you can do whatever you need to do, and now, all of a sudden, you take the pill away.”

Quitting ceases to be much of a choice but a battle that has to be waged each day because circumstances demand it. Law enforcement, maybe family or health concerns call for a reality check.

“Quitting takes a lot of work,” Stano said. “Nobody quits because they want to. They quit because they have to. An addict and alcoholic will keep on using until they’ve come to a point where they cannot make it work any more. They say to themselves, ‘When I can’t make it work, I’ll have to stop.’ Until that time comes, I will keep using.’ Nothing stops the addiction like pain. Pain in some form — mental, physical, emotional, financial — some form of pain will stop you.”

How does it begin?

“It’s so difficult to make people understand — everyone of us have used a chemical to feel better,” Stano said. “There’s not too many people who haven’t had a drink after work or taken some antidepressant when they’ve been depressed. Or those who have had anxiety and taken something from a doctor. These people thought nothing of it. They thought, ‘something’s wrong, the medication is helping me.’”

Like a glass of chardonnay, then later prescription drugs, chemicals become a social crutch. Because people don’t associate the things with the stigma of a junkie taking a hit alone in an alley, it becomes acceptable to consume.

“A lot of times, people start using drugs for the same reason,” Stano said. “They don’t think it through that way, but they find out, ‘You know what, I’m a shy person. But, when I took that pill, I was able to go out and able to talk to people.’ Who wants to go back to being shy? If I don’t take the pill now, then I don’t want to go out. I won’t be able to have a good time.’”

Time may change an occasional social habit into something more. Stano said an addict can spend the day trying to figure out how to manage the cravings.

“It becomes very difficult to embrace this idea that everybody enjoys the relief that a chemical gives them, but, unfortunately, there’s a percentage of us that’s going to go the other step in which we have to use more and more,” she said. “What even sucks more is that I don’t feel good when I’m using. I’m just using because I have to — they mean it. They don’t get any pleasure. People just say about addicts, ‘They just want to get high.’ But they don’t get high after a while. They use just to manage. They are not even using for the pleasurable effects that people think they are getting. They are using to get through the day and not kill themselves. That’s why they are using.”

Stano said people should be a little more understanding of addicts because they may suffer with other problems, perhaps even endure mental illness.

“We are way too hard on addicts. Way too hard,” she said. “There is a reason they use, and it is not always about being high.”

Getting high becomes all about surviving, and that becomes a full-time job.

“Getting high is work,” said Erica Usher, prevention supervisor for the commission. “That lifestyle requires work because it becomes exponentially more complicated as you go.”

People may associate a drug addict as someone living on the streets, a frequent flyer among criminals arrested by law enforcement. An addict can be anybody.

“People say that those using opiates — they come from the streets,” Stano said. “But a lot of the people coming in that are using opiates that want to get clean are working people that had a surgery that they got hooked on opiates, and they can’t get off. And once they can’t find an opiate, they go to heroin. So, it could be anybody. Addiction does not discriminate.”

If a drink or a pill gets a person through the day, perhaps everyone is doing it, so why not feed the beast? Addiction counselors said that the nihilist, pleasure-seeking approach is self denial. It’s not the chemical, it’s the addiction that has consequences.

“We don’t know if tomorrow if I take that drink, and I find that it helps me get through the day, if six months from now, I’m now using that drink to help me get through this, this and this,” Stano said. “People may say to me, ‘Don’t you think you are drinking too much. No. Why? Because my life feels better. I’m not anxious. I’m not lonely. It feels better. How can you tell me that I’m drinking too much?’ And that’s what we see when people come in here with DUIs. That’s the problem. They come in here saying you don’t understand. Everyone else drinks. But then I say, ‘You don’t understand. It does bad things to you. That’s your problem. You can’t drink.’”

Bad choices may be lasting

Poorly informed choices about drugs and alcohol perpetuate themselves with bad decisions because most people generally don’t educate themselves about the consequences.

“It’s, ‘oh, there’s a pill for that’ or ‘everybody drinks,’” Usher said. “That’s what I’m going to do. I’m sad, so this is how I’m going to cope. When we don’t look at the pros and cons of all of it, then we end up oftentimes in situations where we are stuck. And it was because we didn’t educate ourselves before we made a decision.”

Using drugs or alcohol doesn’t necessarily mean addicts will choose to be breaking into cars to steal loose change and more. However, a decision made to have a drink or take a pill, maybe more, leads to a tragic event that echoes an eternity.

“If I’m using, and I’m not stealing, but doing these drugs to manage to my life, but now I’m driving somewhere and I crash into someone’s family, kill their kids, well, that impacts lives,” Usher said. “My choice, what I did so I can get through my day, just destroyed someone’s life.”

No silver bullet can cure addiction

Walking or running away from substance abuse is never easy. Opinions differ on the best method to become clean. Experts agree that sobriety is work, a lot of work.