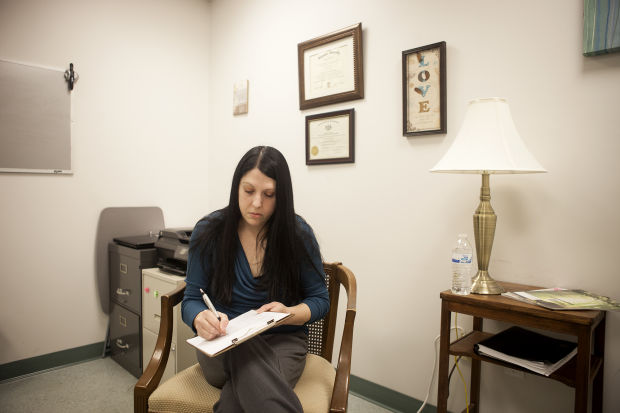 Anna Deeds, a licensed professional counselor in Uniontown, takes notes in her office, where she often works with parents and children dealing with problems associated with alcohol and drug abuse. 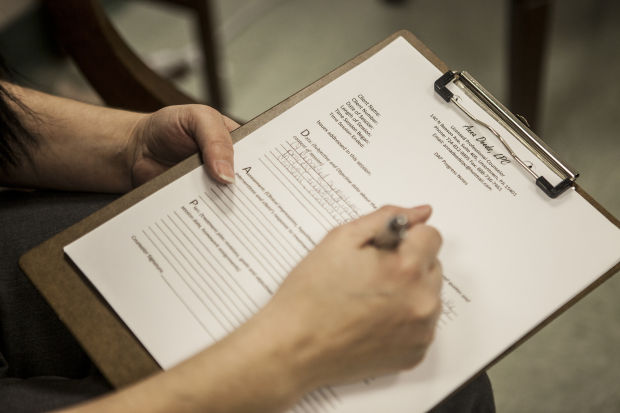 Anna Deeds, a licensed professional counselor in Uniontown, completes an intake form for a new client.

Anna Deeds, a licensed professional counselor in Uniontown, takes notes in her office, where she often works with parents and children dealing with problems associated with alcohol and drug abuse.

Anna Deeds, a licensed professional counselor in Uniontown, completes an intake form for a new client.

Two experts contend that children from parents with alcohol problems may be affected psychologically.

Anna Deeds, a licensed professional counselor in Uniontown, has worked with parents and children dealing with problems associated with alcohol and drug use.

“Alcoholism has an effect on the whole family,” she said. “It has a subconscious effect. Even though children may not be aware of it, it does creep into their minds and affects how they see the world and about how their parents cope with life by drinking.”

“When these kids come in, it is really sad,” he said. “These are kids whose homework doesn’t get done. They are a mess. They don’t know what a routine is; getting some chores done — that is foreign to them. They have a life that is — put simply — without a sense of routine. Is mom going to be drunk or helping with homework? Imagine that.”

Deeds said children of alcoholics learn to be secretive about their lives.

“In really bad alcoholic homes, kids won’t bring friends home because the parents might do something embarrassing,” she said. “They want to hide what’s going on in the home.”

Deeds said families experiencing an alcohol problem may hide that aspect of their lives, so it compounds the problem.

“People don’t realize the denial and the fact that it happens a lot,” she said. “For example, a lot of alcoholics won’t drink around their kids, so they don’t know it still affects them. But because the parents are drunk, the grandparents may have to raise the kids. Or parents, they can’t get their kids to school in the morning because they are still sleeping off the night before. ”

Deeds said on an emotional level, alcoholism colors how children see their parents.

“On the emotional side, they see their parents as angry, full of self-pity and that they see the world really negatively,” she said. “They pass that kind of thinking onto their children. They learn those patterns. There are families with grandparents that are alcoholics. It goes through generations.”

Deeds contends that not everyone is an alcoholic and that having a glass or two of wine isn’t cause for alarm for some people.

“One or two with dinner, that’s OK — nothing wrong with that,” she said. “In a lot of cultures, this is part of their dinner, and it never becomes a problem for the kids.”

However, Deeds said, when a glass or two of wine becomes a whole bottle or two, then there is cause for concern. A parent having a few drinks at the end of the day teaches children something they shouldn’t have to learn.

“If they are not alcoholics and can show responsible social drinking, maybe it is OK,” she said. “But if they are an alcoholic, it reinforces drinking as a coping skill and that alcohol is OK. That’s not good.”

“There’s a lot of depression, and they tend to bottle up their feelings,” she said. “I think they learn that it is not OK to show emotion — except for anger. That emotion is kind of acceptable among families with alcoholics.”

Carosso said an alcoholic’s behavior affects how a child reacts, how their character forms. He said there are two ways a child may cope with an alcoholic parent.

“Kids either identify with the parent or the opposite,” he said. “For the kids who identify with that parent, they can be impulsive, act out, make poor decisions, have poor judgment. Their lives are chaotic and dysfunctional.”

Carosso said a child may go to the other extreme.

“A kid may be ultra-responsible, the caretaker, dutiful,” he said. “They are so anxious, because the weight of their family is on their shoulders. They are worried about mom.”

Carosso said therapy may be able to help families, but only if change is welcome.

“With children, we take a very targeted approach. As soon as the family is stabilized, the child’s life can then improve,” he said. “It is very difficult to improve the child’s behavior if they continue to live in that environment. At the same time, sometimes the environment doesn’t change. What we try to do is give the child as much support as possible through counseling and connecting them with natural supports — people in the community — a coach, maybe an uncle, pastor, someone who they can connect with after school. These are people who are then healthy role models so they can see what normal is.”

Asking a 5-year-old child to get Dad a beer or allowing a teenager to sip wine at a wedding could lead to a lifetime of addiction.