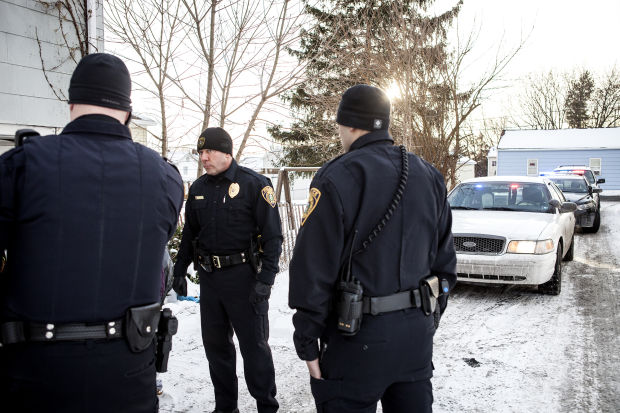 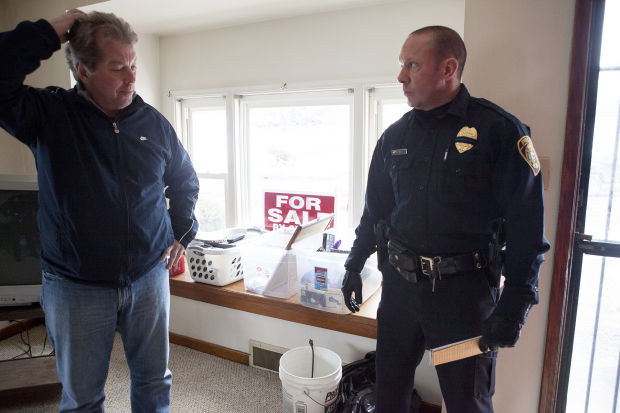 Uniontown police Lt. Thomas Kolencik responds to a burglary at 164 Oakland Ave., owned by Steve Cehula, left. Copper was stolen from several places in the house, which has become commonplace in the city. According to Kolencik, the break-ins occur mostly when people leave home for work, or in houses like Cehula’s, which are on the market with “for sale” signs. The thefts are likely being committed by drug users who sell the copper for quick money and then purchase drugs, says Kolencik. 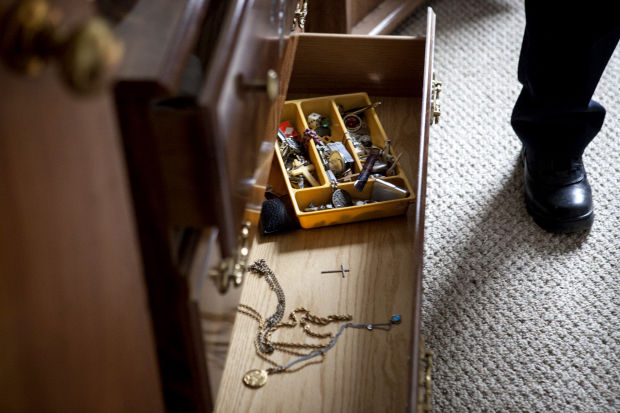 Uniontown police Lt. Thomas Kolencik responds to a burglary at 164 Oakland Ave., owned by Steve Cehula. The burglars had rummaged through drawers looking for valuables, along with stealing copper.

Uniontown police Lt. Thomas Kolencik responds to a burglary at 164 Oakland Ave., owned by Steve Cehula, left. Copper was stolen from several places in the house, which has become commonplace in the city. According to Kolencik, the break-ins occur mostly when people leave home for work, or in houses like Cehula’s, which are on the market with “for sale” signs. The thefts are likely being committed by drug users who sell the copper for quick money and then purchase drugs, says Kolencik.

Uniontown police Lt. Thomas Kolencik responds to a burglary at 164 Oakland Ave., owned by Steve Cehula. The burglars had rummaged through drawers looking for valuables, along with stealing copper.

The police radio squawks out an emergency call.

Officers and emergency personnel are dispatched to a report of an unresponsive man inside a vehicle.

The caller says a needle is sticking out the man’s arm.

Police officers arrive and immediately look for a pulse, but struggle to find one.

Cardiopulmonary resuscitation is initiated as an ambulance rolls to a stop beside the vehicle — emergency lights flashing.

That scenario, police officers and EMS personnel say, plays out all too often for them, as drug overdoses — particularly those involving heroin — continue to spike across the region.

Uniontown police Lt. Thomas Kolencik said that he has handled such calls on a more frequent basis in recent years and said that there is a protocol he and other police officers follow to try and save lives.

“Obviously the first thing you do is ask anyone that is around, if she is on drugs, if he has done heroin, “ Kolencik said. “It might be insulting, but it is the fastest way for us to know how to proceed. The second thing we are looking for right away, is heroin or opiates, syringes, not only to decipher if they have overdosed, but to ensure our safety.”

Kolencik said that he had a recent overdose where officers found a woman unresponsive in her car and safety became a concern.

“I reached under her arm to pull her from the car and start resuscitation and CPR and there was a needle under her arm. Thankfully I didn’t get stuck, but it is a concern,” Kolencik said.

Aaron Moreau, a paramedic who works and teaches in Fayette County, said that when paramedics and EMS arrive at such scenes, they also follow a statewide protocol for handling overdoses.

“In EMS, there are protocols that must be followed to ensure proper treatment is being given to a patient with a specific medical emergency or traumatic injury,” Moreau said.

Moreau said that EMS protocol is basically a flowchart of “if and then” and “yes and no” statements. If a patient is one thing then the appropriate response is another thing. He said that state protocol “7002A — Altered Level of Consciousness” is what first-responders use when dealing with an adult patient with a possible overdose, particularly if it is a narcotic.

Kolencik said that EMS will immediately administer the drug Narcan, if they have been able to determine it is a drug overdose.

“If they are certain it is a factual OD, with signs like blood running from an arm, a needle laying there, or many times, a needle still in the arm, they administer the Narcan, an emergency drug that reverses the effects of heroin and other drugs, and if the patient responds, it was an overdose. If a patient is still unresponsive, then we begin to look at other possibilities, including seizures or heart attacks. It is a short window, because the person is essentially in cardiac arrest. It is the same as a heart attack, just an induced one.”

Moreau said that the main concern for patient care in such instances is the status of the respiratory system.

“Narcotics tend to depress the respiratory system causing hypoxia, which allows for inadequate oxygen flow to the brain and ultimately brain damage or death if not treated,” he said.

And Moreau said that there are new concerns for emergency personnel, with the rise of a new lethal batch of heroin that is cut with the painkiller Fentanyl and is killing off users at an alarming rate.

“There is a new drug-seeking thrill out there. We have been made aware of this drug and the possible results/treatment suggestions for it. It has become a pretty deadly combination,” Moreau said.

Dozens of people have died since the beginning of the year in western Pennsylvania from a suspected overdose of the heroin/Fentanyl mixture.

State Attorney General Kathleen Kane said the majority of the fatal overdoses with heroin have come from bags stamped with the words “Theraflu,” “Bud Ice” and “Income Tax.”

She said that bags with those stamps have been found by narcotics agents in Allegheny, Westmoreland, Armstrong, Butler, Lawrence and Beaver counties.

The fatal concoction is also suspected in hundreds of overdose deaths in other states, including New York and Maryland.

Kolencik said that while he hasn’t had any dealings with the potent batch of heroin, he has seen a marked increase in heroin overdose calls in recent years, including a run last fall that he still remembers vividly.

“There was a time, last October, we went every single day and into November where we had at least one a day,” he said.

He said that with the rise of heroin, the drug culture is changing and overdoses appear more common as a result.

“Not only is there a 360-degree turn in the type of drug use — heroin is cheaper and more addictive — it has changed the culture of the drug user,” Kolencik said. “Cocaine is a party drug, a nighttime drug. Heroin and prescription drugs are not. They are often daytime drugs. Users wake up needing it and that has resulted in burglary spikes and other daytime crime.”

In the end, both Kolencik and Moreau said that regardless the protocols in place, every scenario is a individualized case, which makes it hard for them to know, for certain, how such emergency calls will turn out in the end.

“Every patient that we treat responds differently to medical emergencies,” Moreau said. “Certain patients may have stable vital signs in an unresponsive state longer than someone else. However, despite the actual length of time for each patient, it is a sign that the body has encountered a life-threatening situation for which it is trying to compensate. This state becomes a ticking time clock and every second counts.”

And sometimes, when those seconds run out, Kolencik said he is tasked with the most difficult part of his job.

“The hardest part of my job is giving a death notification,” Kolencik said. “Even when you go to the family and they say that they were worried or that they had been expecting this, it is still a shock. They didn’t expect it today. They feel guilty because they feel they could have done more. Your heart goes out to them.”

Fayette County has an increasing problem with drug abuse. A problem that can sometimes be so intense as to find the victim in an overdose state that may lead to death. From 2009 to 2011, Pennsylvania experienced 6,206 drug-induced deaths according to the Pennsylvania Department of Health. Fayette County had the highest rate of drug overdoses based on the population size.