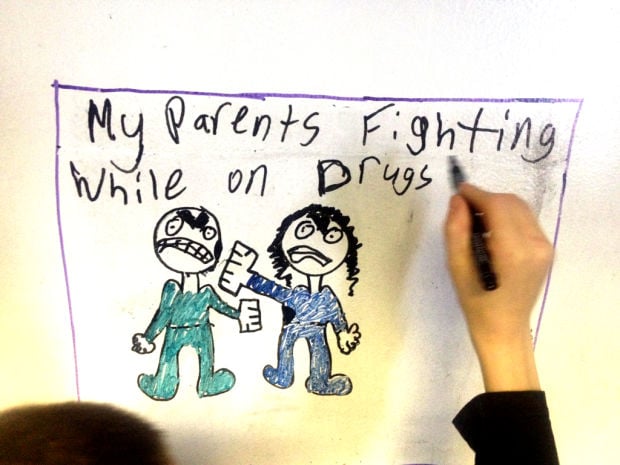 "John," 12, draws a picture of his parents fighting with each other while on drugs. John, the pseudonym he chose for himself, says his mother would feed him and his three brothers a diet of cereal while she was high, and later set their house on fire before he went to live with his grandmother. 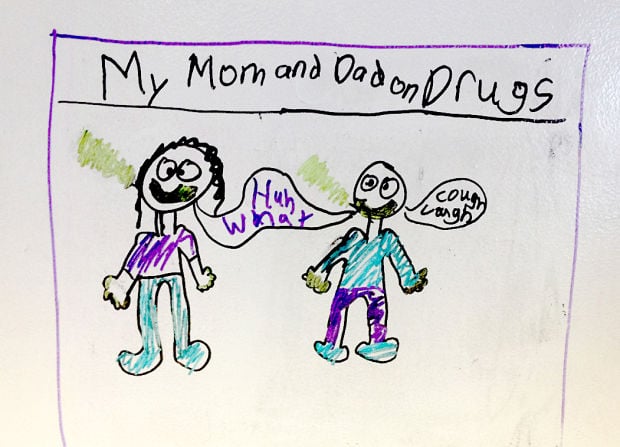 “John,” 12, has lived with his grandparents since he was about 4 years old. He was born addicted to drugs and both of his parents are addicts. John, the pseudonym he chose for himself, drew this picture depicting how he sees his parents when they are on drugs. 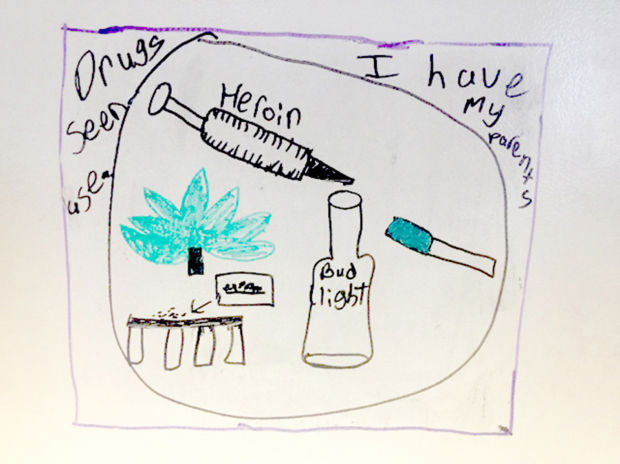 In this drawing, “John,” 12, a child of two drug-addicted parents, shows the drugs he has seen his parents do, including heroin, marijuana and crack-cocaine.

"John," 12, draws a picture of his parents fighting with each other while on drugs. John, the pseudonym he chose for himself, says his mother would feed him and his three brothers a diet of cereal while she was high, and later set their house on fire before he went to live with his grandmother.

“John,” 12, has lived with his grandparents since he was about 4 years old. He was born addicted to drugs and both of his parents are addicts. John, the pseudonym he chose for himself, drew this picture depicting how he sees his parents when they are on drugs.

In this drawing, “John,” 12, a child of two drug-addicted parents, shows the drugs he has seen his parents do, including heroin, marijuana and crack-cocaine.

Twelve-year-old John doesn’t know where his mother is, and he says he doesn’t really care.

The last time he saw the woman who gave birth to him, she brought Legos for John and his three younger brothers — birthdays and Christmas for all four children rolled into one — and then she disappeared upstairs to get high.

John said his paternal grandmother, who has had custody of the boys for some time, chased his mother out that day.

“Gram told her, ‘When you get help and you get clean, come back,’” said John.

That was close to eight years ago, he estimated. “And that was the last time we saw our mom.”

John and his brothers are in counseling now, and John says he’s happy to be living with his grandmother until his father gets clean and stays clean. He maintains a certain amount of anger toward his mother though.

“I don’t really want to see mom except to ask why she left. How come she just left us there?” he questioned.

“How come you thought drugs were more important than us?”

Talking to him, you’d never know that John (that’s the pseudonym he chose) was born addicted to drugs himself, as a result of his mother’s prenatal drug use. Added to his condition at birth was an upbringing that brought him an early awareness of domestic abuse between his drug-addicted parents.

CPP Behavioral Health Inc. psychiatrist Dr. Ravindra Mehta says a child like John who was born addicted would experience painful withdrawal symptoms at birth and would likely be born with a low birth weight and small head circumference.

Babies like that may go on to experience language, visual and motor issues as well as behavioral problems, poor school performance and a feeling of being rejected by peers, Mehta said.

“Children who have experienced both prenatal and postnatal drug exposure are at high risk for a range of emotional, academic and developmental problems and are also susceptible to alcoholism and other addictions later in life,” said Mehta.

In some ways, John doesn’t fit the mold.

John is a bright and engaging seventh grader and very polite. He pays attention to the news and current events. In his own words, “You gotta learn what’s happening in the world.”

He says his favorite subject, not counting gym class, is math.

“I was in eighth-grade algebra for three years,” John reports with pride.

Once he left New Directions, an alternative schooling program that provides specialized counseling and support for students, and returned to mainstream school, he said he was placed in a less challenging math class, which he found disappointing.

While being interviewed, John turned the questions around now and then to demonstrate how sharp he is. He asked, for example, “Do you know who Archimedes is?” and then went on to explain that Leonardo da Vinci certainly did and was an admirer of Archimedes’ work.

Despite all the obstacles he’s faced and the inevitable bumps in the road ahead, John says he’s happy to be where he is right now. He’s got a girlfriend (or two) and can imagine himself being a policeman or soldier or playing wide receiver for a professional football team when he gets bigger. And he’s sure he’ll get bigger too. “Ever hear of a growth spurt?” he asked.

“We’ve had a lot of trauma,” said John. His grandmother suffered through an abusive first marriage and a late-term miscarriage, the effects of which lingered as the family grew. One of her daughters — John’s aunt — died of a heroin overdose before John was born.

Asked to define the term, John said trauma is “when something’s really scary and you don’t know what to do.”

Traumatic is how he describes life with his mother, to the extent he can remember it. He said he only lived with his mom for a couple of years.

John says he knows what a mother is supposed to do. It’s a mother’s job “to love you and take care of you and not let anything bad happen to you.”

“But she was the complete opposite,” he said.

From his recollection, John says his mother was impaired all the time, using heroin, cocaine, marijuana, beer and cigarettes. He remembers his mother feeding him and his brothers a constant diet of cereal, when she was sober enough to pay attention to them at all.

“Her eyes would get all big, she would act all funny,” he said. “She would mumble stuff and she couldn’t walk straight.” He said she was in and out, coming in high and leaving again.

“Then she didn’t come back at all,” he said.

“Their eyes, they’re always like this,” John said, doing his best impersonation of a zombie. “Then they doze off.”

Once, he said he remembers coming home with his dad and brothers to find that his mother had destroyed the house.

“She burned everything in the house, broke all the toys, the TV, the windows, all the plates and stuff and tipped over the fridge,” John said.

John doesn’t tell stories of beatings or harsh words endured by himself nor his siblings, he tells stories of neglect.

John said he recalls his mother locking his brother in a crib in a room for hours sometimes. “Dad would leave him out then,” he said. “He would yell at our mom for doing it, and she would hit him.”

Another time, despite the fact that there were adults present and even sleeping in the same room, John said his brother threw a toy car and hit him in the eye. None of the adults were coherent enough to help, though. In order for his brother to get the toy car, he had to open the drawers of a dresser and use them to climb to the top to reach the toy to throw it, and no one stopped him.

Mehta says children like John have trouble forming secure attachments. They become mistrustful and less willing to learn from adults.

John, being the oldest of the boys, says he felt like it was up to him to take control of his siblings when his mom and dad were high. At 12, he believes he can take care of himself and that he’s capable of doing everything on his own, except driving.

He doesn’t know whether he’s actually the boss of his brothers, but he says, “I act like I am.”

That’s not unusual, according to Mehta. “Frequently children become caregivers to their parents and younger siblings, which is known as ‘parentification.’ This child carries the greatest burden of taking care of everyone and feels responsible for running the family. In this role, John experiences a great deal of anxiety and will go to great lengths to control or eliminate his parents’ use of drugs.”

John’s future with his father

John’s father recently completed rehab and is in transitional housing. He’s been clean for over 100 days. He has visitation with the boys, and John said his dad spends time doing family things with them.

“He plays with us, he cooked dinner with us and he ate it. He makes us tea,” said John. “He’s nice and he leaves us watch TV.” He also gives out hugs, John says.

John is eager to spend time with his father and says he looks forward to a time when they can do father-son activities together like hunting. But he’s apprehensive too.

“I’m afraid he’ll do the same thing all over again, just like he did before,” John said. This is his dad’s third or fourth attempt at getting healthy. John says he believes his father is trying though, and he hopes for the best.

“I hope he can take care of us and get us back before something happens to Gram,” John said. She has some health problems, and the stress of taking care of the children is taking its toll on her.

Does he also hope his mother gets help? John says, “Yeah, so she can take care of all her other kids.”

Mehta says John is a very resilient child. The counseling is helping, Mehta said, and John’s siblings and grandmother have been participating as well to help deal with the anger, resentment and trauma as a result of his parents’ addiction.

According to Mehta, “John is realistic and hopeful that one day he will see his parents clean.”

“John understands the seven Cs of addiction,” Mehta said, which are, “I didn’t Cause it. I can’t Cure it. I can’t Control it. I can Care for myself by Communicating feelings, making healthy Choices and by Celebrating myself.”

I would not let John go hunting with his father. I think John should be guided towards a different activity. John has goals and motives that we do not understand yet. People keep feelings a secret from parents, friends and relatives, sometimes to the extent of damaging themselves. These type of children can be suicidal and homicidal and we do not know what drugs have been administered to these children that cause psychological and physical problems that lead to disastrous outcome years later. The proper diagnosis is needed and so far I have not seen any improvement concerning others in the media. Children need discipline, guidance and nurturing. No parent should leave a child take complete responsibility and make decisions on their own. Some people mistake an attention for affection disorder for gender identity disorder, in other words transgender identity crisis. Sibling rivalry does not always show. I do not want to change my race but I am sure that doctors will come up with a drug and name to cause world domination.