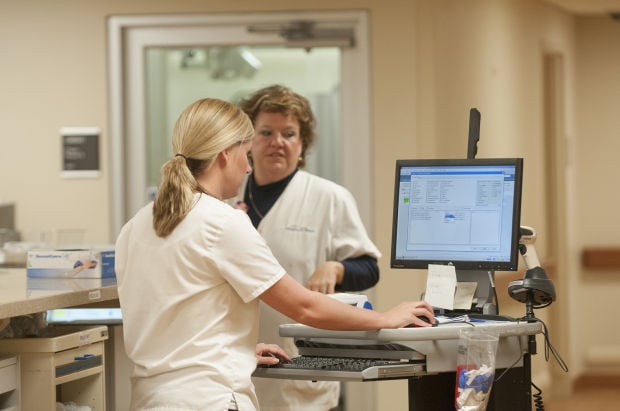 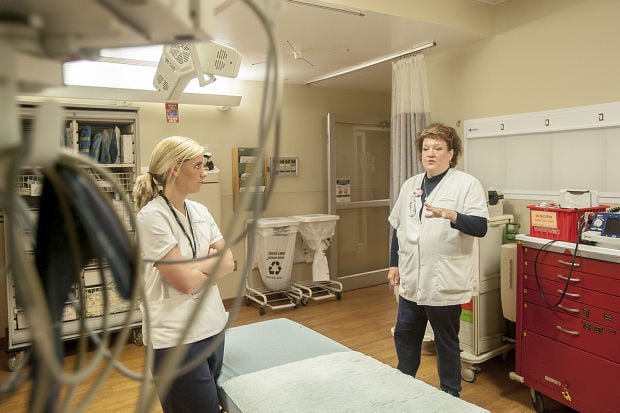 ER nurses Rebecca Bond (left) and Robinette Vitez are pictured in the major/trauma room of the Uniontown Hospital. Each day, and at the start of every shift ER nurses make certain that this room is stocked and ready for whatever emergency comes through the doors. 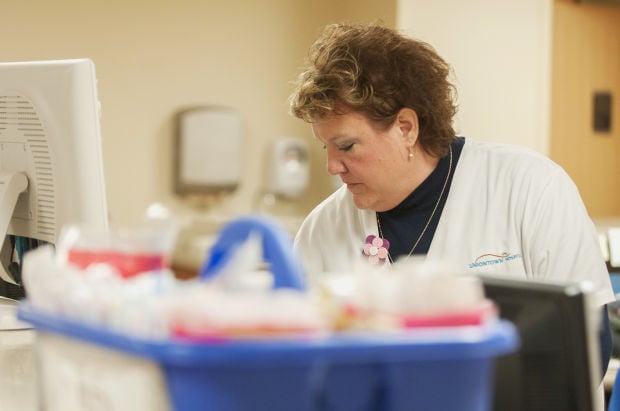 Robinette Vitez, a 26-year veteran in treating emergency room patients, has witnessed a rise in drug abuse among teens. She said the most difficult part of her job is seeing loved ones grieve the loss of a family member who died from a drug overdose.

ER nurses Rebecca Bond (left) and Robinette Vitez are pictured in the major/trauma room of the Uniontown Hospital. Each day, and at the start of every shift ER nurses make certain that this room is stocked and ready for whatever emergency comes through the doors.

Robinette Vitez, a 26-year veteran in treating emergency room patients, has witnessed a rise in drug abuse among teens. She said the most difficult part of her job is seeing loved ones grieve the loss of a family member who died from a drug overdose.

The aftermath of a drug overdose weighs on the shoulders of ER nurse Robinette Vitez.

Seeing loved ones grieve for a deceased family member under the harsh lights of the emergency department is the worst part of the job.

“That’s what’s hard on the staff — the grief,” Vitez said. “It makes us all want to go home and hold our kids a little tighter.”

Vitez said sometimes, family members didn’t even know their loved one suffered from a drug addiction. Or, they assumed he or she was in recovery.

“The aftermath is horrible. It’s just awful to deal with the devastation,” Vitez said. “It’s heartbreaking.”

Over the past 26 years working as a nurse at Uniontown Hospital, Vitez has seen significant changes to the emergency room.

While recent hospital statistics say there has not been an increase in the amount of drug overdoses, Vitez said she has seen more and more young people come through the doors of the ER over the past three decades, as well as major repeat offenders.

“They’re starting younger and younger,” she said. “But, unfortunately, we don’t seem them at 11, 12 or 13, when they’re just starting. We see them when they’re already in a full blown addiction.”

And for those with full blown addictions, social services is there to help, but many times, patients refuse.

“Some want help, some don’t,” Vitez said. “We can’t force them into any type of rehabilitation.”

Patients also sometimes refuse to even enter the hospital after receiving a dosage of Narcan by EMS personnel, and opt to sign a release instead.

“A lot of them deny they even took anything after they’re resuscitated,” said ER nurse Rebecca Bond.

While these are all trends Vitez has witnessed as an ER Nurse, she said there’s not a typical profile of patients suffering from drug addiction; they run the gamut.

“There’s not a stereotypical picture of what they look like,” she said. “It crosses all bounds. There are people who come in here from good families, upper middle class people. Some of them are working people, and you wouldn’t typically even know they have an addiction problem.”

Her overall outlook on the drug problem is not positive.

“It’s bad here,” she said. “But I think it’s everywhere, and it’s only going to get worse.”

Vitez is an advocate for educating middle school students on the effects of drug addiction.

Outside of her work at the hospital, she’s involved with “Reality Tour,” a consequence-driven program aimed at parents and children as young as 10.

“Reality Tour” follows a person through life addicted to drugs, from his arrest to a trip to the emergency room and, ultimately, death.

“The children are riveted as the scenes play out,” she said.

The program, run by the nonprofit organization Candle Inc., can be found in 16 Pennsylvania counties and seven states.

“I think you need to educate these kids and the parents,” she said. “When these kids get to high school, it’s already too late. It needs to be done at the middle school level.”

She’s hopeful her fellow employees will get on board with the program as well.

“I started with the group because I’ve seen what comes in here,” she said. “Dealing with a parent whose child dies — that’s the hardest thing to do as a nurse.”