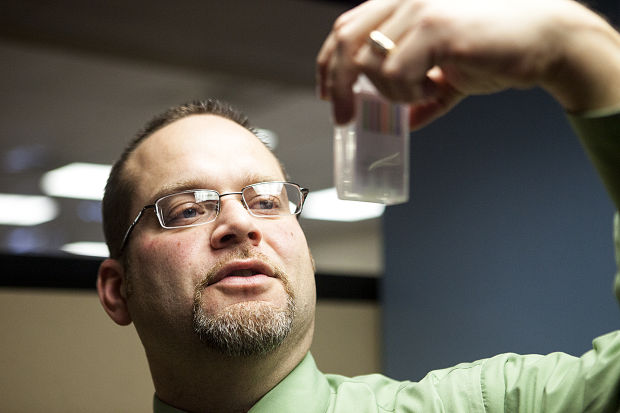 Fayette County Chief Juvenile Probation Officer Heath I. Randolph examines the results of a swab test that is used to screen for drugs. Six months ago, the office switched to using swabs instead of urine analysis because it is more cost effective. See related story on A3. 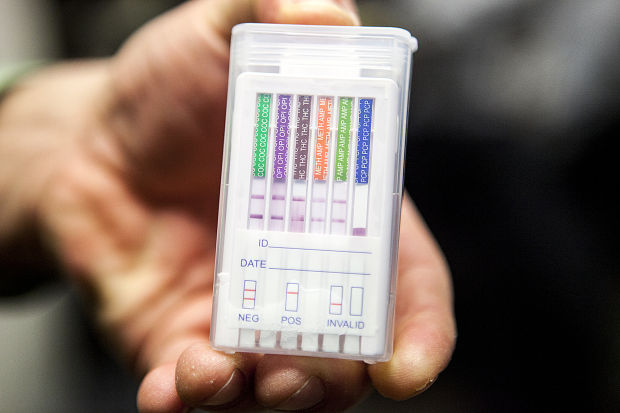 Chief Juvenile Probation Officer Heath I. Randolph displays the results of a swab test that is used to screen for drugs. The most common drug that tests positive is marijuana. 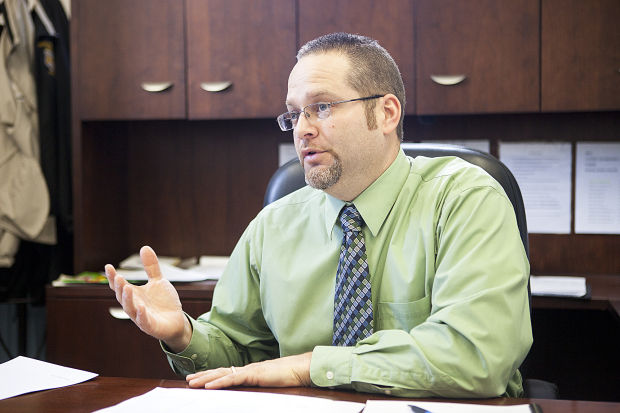 Fayette County Chief Juvenile Probation Officer Heath I. Randolph examines the results of a swab test that is used to screen for drugs. Six months ago, the office switched to using swabs instead of urine analysis because it is more cost effective. See related story on A3.

Chief Juvenile Probation Officer Heath I. Randolph displays the results of a swab test that is used to screen for drugs. The most common drug that tests positive is marijuana.

This article is part of a continuing series of articles examining illegal drugs in Fayette County.

A spongy swab is placed under a person’s tongue to collect enough saliva to test if drugs are present.

The Fayette County Juvenile Probation Office (JPO) uses such tests to screen for alcohol, marijuana, heroin and other drugs.

The swab is placed inside a tiny plastic box that is smaller than a pack of cigarettes.

Like a pregnancy test, tiny, colored lines appear on a small piece of paper in the box, producing results for JPO officers in less than four minutes.

Randolph said a small percentage of juveniles also tested positive for a wide variety of illegal drugs, including heroin and prescription drugs.

JPO screens those minors who, in some way, shape or form, have violated the law.

Randolph said the number of juveniles who have used drugs has increased in the past 20 years because social morals have changed.

“Drugs are almost becoming like cigarettes were back then,” he said.

When Miley Cyrus, an influential teenage entertainer who was nominated Time magazine’s Person of the Year for 2013, openly smoked a marijuana cigarette during an awards show, the clip was broadcast near and far. Politicians past and present have admitted to drug usage, including former President Bill Clinton, who swore he didn’t inhale.

Randolph attributes a change in drug usage to a societal shift in how drugs are perceived by young people.

“It’s everywhere,” he said. “It’s on the music, the news. It’s on TV. Celebrities. Whenever you have a society where you are inundated with that all day long, it almost becomes like a learned behavior. If she’s doing it, why can’t I? There’s obviously been an attitude shift toward it.”

Then there may be the home environment that allows drug usage.

“We’ve had cases where parents and kids are doing drugs together,” Randolph said. “So if that is your environment, who is to tell you that this is wrong? This is the social norm that you’ve had your whole life.”

And what about Colorado and Washington where recreational marijuana usage is legal for anyone 18 and older?

“Until that becomes the law in Pennsylvania, marijuana is still illegal here,” Randolph said.

Randolph said the main drug of choice is marijuana, which some consider a gateway drug to harder substances.

“When I was a probation officer years ago, I can remember dealing with kids, 12 years old, huffing paint, smoking marijuana, but then you get into some that are into harder things,” he said. “Marijuana — from what I’ve viewed, I believe it does lead you to harder drugs.”

Juveniles use drugs for a variety of reasons.

“Every individual — their experience is unique,” he said. “There is no cookie-cutter response to it. Everyone has reasons that they use that are different. However, there is usually some type of underlying issue whether it is trauma, school pressures and family issues — whatever the case may be.”

Another reason juveniles may seek drugs is that they are cursed by youth — the irrational belief of indestructibility coupled with delusions of knowing better than adults.

“Theirs is that feeling of indestructibility, and they are trying to make their own decisions,” Randolph said.

Randolph illustrated the point about juvenile decision-making as it relates to marijuana.

“When they come in, we ask if they smoke cigarettes,” he said. “Most of them say, ‘No, that’s bad for you.’ They then say smoking marijuana is healthier for you because it is natural. Do you see? We don’t agree with that kind of rationale.”

Randolph said juveniles who are using drugs are not isolated to one peer or socioeconomic group but represent a wide variety of people. He said juvenile drug users from more affluent families have the means to acquire more, so their appetites may not be as limited as those minors on the other end of the scale. And Fayette County juvenile drug usage is average when compared with similar-sized counties, he said.

Today’s juveniles have more access to drugs, said Randolph, noting that 25 years ago, the Internet was not readily available, so there was not a lot of information available for curious teenagers. Today, Randolph said, the Internet has any assortment of websites that offer instructions about what fertilizer or grow lights are needed to cultivate marijuana.

“Kids are much more savvy, and they are up on things,” he said.

Parents may be the last to know their kids are using drugs.

“A lot of times when kids are coming in to us fresh off the streets, the parents aren’t aware of what’s going on,” Randolph said.

Randolph said in most cases, parents are not drug users. He said parents may be unaware that the family medicine cabinets has made them unwitting drug suppliers.

“A lot of times, kids will say that they are stealing to support their habit or they are raiding dad and mom’s medicine cabinet,” Randolph said. “Parents a lot of time are surprised that kids are taking their medicine. You don’t realize that until you start thinking, well, I was prescribed these, but where are they going?”

He asks parents to pay close attention to changes that may be signs that their child could be using drugs.

“If you are paying attention, you have a general idea as to their daily ebbs and flows, how they act, what they should be doing,” he said. “When they are off, you ask if everything is OK? You start thinking is something going on here: irritability, not wanting to go to school, extreme truancy, defiant, not coming home. Like with any other addict, weight loss.

“(They’re) always needing more money,” Randolph said. “You (need to) ask questions about where the money is going.”

“There are some basic things you need to be aware of. Is their academic performance slipping? Are you starting to observe issues? Are they isolating themselves? Has their peer group changed? You just need to look at the overall picture,” he said.

Parents are the one line of defense that Randolph wants most to emphasize in this struggle.