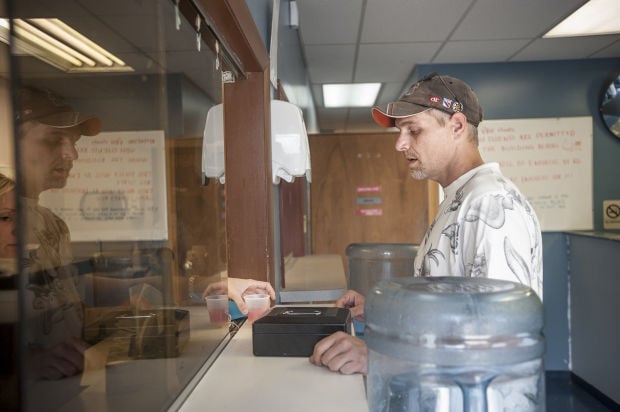 Richard Markovich, 40, of Republic, prepares to take his daily dose of methadone. The 20-year addict has been clean over a year. 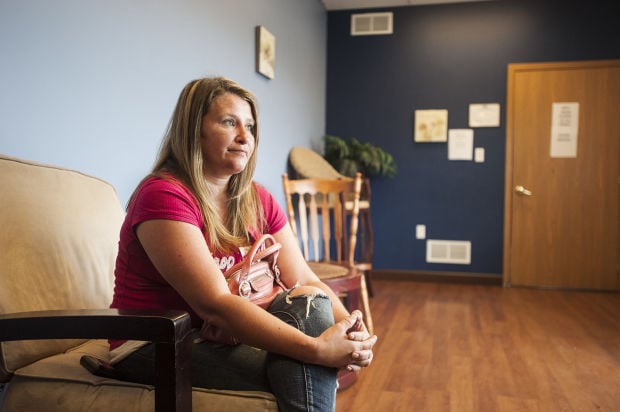 Vicki Tringes, 33, of Vanderbilt, reflects on her addiction to pain medication that began when she was 22 years old. “When I was on drugs, I didn’t have a care in the world, a lot of people didn’t know. I hid it well,” said Tringes. 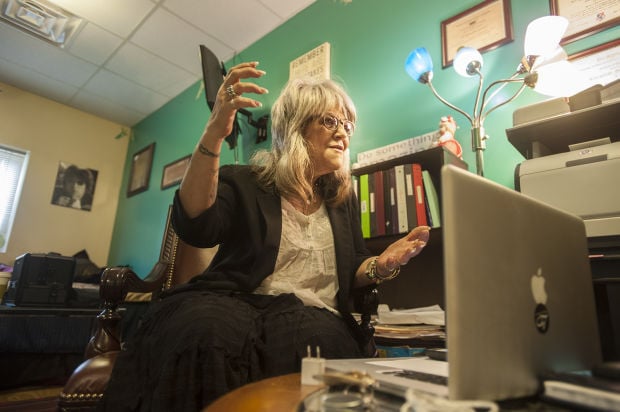 Roz Sugarmann, executive director and owner of Addiction Specialists Inc., talks about her facility’s philosophy that addiction is a disease that can ruin people’s lives. 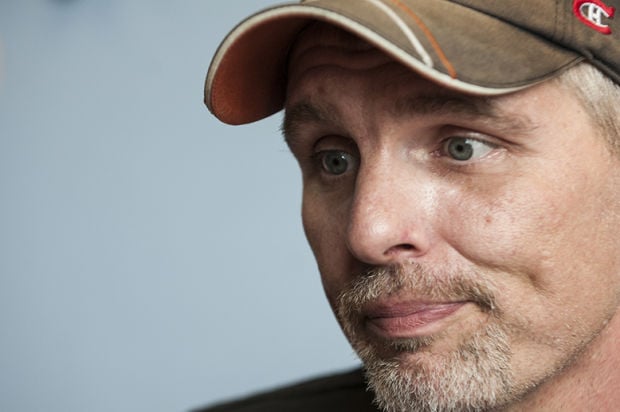 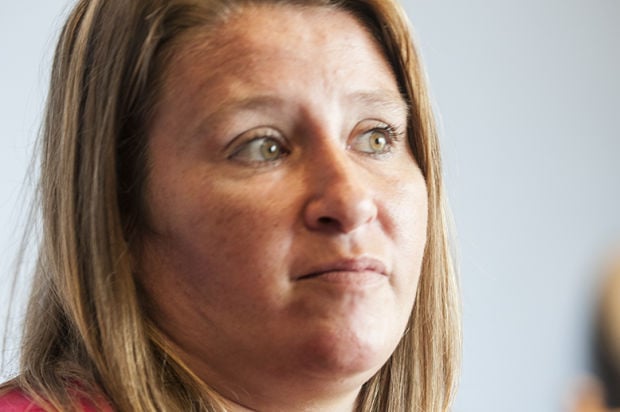 Richard Markovich, 40, of Republic, prepares to take his daily dose of methadone. The 20-year addict has been clean over a year.

Vicki Tringes, 33, of Vanderbilt, reflects on her addiction to pain medication that began when she was 22 years old. “When I was on drugs, I didn’t have a care in the world, a lot of people didn’t know. I hid it well,” said Tringes.

Roz Sugarmann, executive director and owner of Addiction Specialists Inc., talks about her facility’s philosophy that addiction is a disease that can ruin people’s lives.

Republic resident Richard Markovich, 40, said he was prescribed pain medication after a hockey accident that injured his leg as a teenager.

“When the doctor gave me (narcotic pain pills), I thought I had met the best person in the world,” he said. “The drug made me feel so good. I could walk around without limping. And I wasn’t really shy, but I had a hard time talking to strangers. If I took the drugs, I could talk to anyone. The drugs made me feel as one -- that everything connected.”

Health problems led Vicky Tringes, 33, to start taking prescription drugs 11 years ago. She said the pills ended up being a way to cope with emotional pain. Her father died when she was a teenager, and a man with whom she was in a long-term relationship left her devastated when he walked out the door.

“When I was on drugs, I didn’t have a care in the world,” said Tringes, of Vanderbilt. “A lot of people didn’t know. I hid it well. I wasn’t shooting dope or anything like that. I hid a lot of my emotions by taking pills. When I was taking the pills, I didn’t have to deal with any problems. Nothing bothered me. Nothing.”

Markovich and Tringes both came from caring homes and had good upbringings. They work. They have families.

Both are also patients at Addiction Specialists Inc. (ASI), a Fayette County clinic that helps patients cure drug cravings through a program that includes methadone and counseling.

“I’ve never met anyone who says when I grow up, I want to be a drug addict,” said Roz Sugarmann, executive director and owner of the North Union Township clinic. “It’s a choice to experiment, but it’s not a choice to end up as an addict ends up.”

Sugarmann said the clinic’s philosophy is that addiction is a disease that can ruin people’s lives. Methadone is the tool they use to become drug free by curbing opiate cravings and symptoms associated with withdrawal.

Tringes said her moment of clarity -- recovery speak for what made her realize she needed to stop using drugs -- was her children, and wanting to be clean for them.

For Markovich, pain pills led to heroin use by age 20. He said that at times he was “sick and tired of being sick and tired.”

“It’s like a job itself trying to stay high,” Markovich said.

He decided to get clean when he overdosed while talking with a family member.

“She kept asking me, ‘What kind of drugs are you doing?’ I told her I was smoking crack. I thought smoking crack was a lot better for her to hear than me sticking a needle in my arm. When I was sitting in the ambulance, I thought -- I’d rather be a crack head than what I really am. I knew then that I have to stop. That’s when I came to the clinic. It basically changed my life. I haven’t touched a needle in 14 months.”

Tringes said she needed a remedy that could be controlled so that she wouldn’t have a pill bottle sitting in front of her.

Clinical care with a heart

Tringes said that, in her experience, calling yourself an “addict” brings a stigma with it.

“Once you are labeled, you can’t get that back no matter how clean you get. I do have that label as an addict. That hurts. Yeah, I am an addict. … I don’t use, but I will always be an addict. It’s a disease, and a lot of people don’t always look at it as a disease,” she said.

But, methadone also has a reputation.

“I’ve heard how bad methadone was. How some people said the addiction part is greater than some of the street drugs, but the way the clinic has it set up with group therapy and everything is great,” Markovich said. “I’ve never been sick since I’ve been here. My dose keeps coming down and down.”

Since April 2013, he has been enrolled with ASI’s 9-12-18 month program, which is aimed at getting him clean and clear of drugs on that time frame. The program slowly decreases the dosage of methadone while teaching the addict how to stay clean. Group therapy is a big part of the recovery process.

“I started listening to it and wanted what was coming out of that group,” Markovich said. “I decided I don’t want to take methadone for the rest of my life. I want to come down. I want to go back into society normal, to have a functioning life. I want to be normal.”

Tringes said some people wouldn’t consider her “clean” because she takes methadone to curb her cravings, but she considers herself to be so and hopes to be off of it within one year.

“When people come up to get on methadone, they have a mindset that they don’t want to get sick any more,” she said. “When people are in withdrawal, it’s pretty miserable. So thinking about not being in withdrawal is almost euphoric. So when they come up here and get on methadone, they feel normal once again. The problem is, if treatment isn’t incorporated, and they don’t start learning about their disease, they can only feel normal for a certain period of time because an addict doesn’t want to feel normal, an addict wants to feel high.”

Sugarmann, a recovering addict herself, has been clean for more than 31 years.

“I came from a good family,” Sugarmann said. “They were supportive. I was raised the right way, with morals, scruples, values, and, you wouldn’t know it, where my addiction took me. As my illness progressed, I ended up in some not-so-good places. I ended up homeless, no job, nothing. I ended up hurting my family, worrying my mother -- just, not so good things that I’m not proud of. Once I went to treatment, and, thank God, I have been able to stay clean.”

Markovich said he was miserable because of his $400 to $500 heroin habit.

Sugarmann said treating addiction is not just chemical, but it is training the mind to be strong.

“The psychological part of this disease is pretty powerful,” she said. “The obsession to use is very powerful, and, without counseling, without meetings, with a higher power, it is almost impossible to quit. People fail miserably over and over. But there are many people who are clean and in recovery who are involved in a 12-step program that are totally abstinent from all mind-altering chemicals.”

Tringes has high praise for Sugarmann and the clinic.

“I could tell her anything or call her at any time and she would be there for me,” she said. “Even if it is not to do with addiction, I know that she is always there for me. You couldn’t ask for better people. They really care here at the clinic. They really do.”

Markovich said, “I have no interest in ever picking up a needle again. And it is because of the clinic.”

False hope: Recovering addict does not support use of methadone

Recovering addict opposes use of methadone to treat heroin addiction.

The use of methadone in a clinical setting when properly administered with a treatment plan in place that includes the slowly decrease the amount of methadone with the end result or the goal being to eventually become no longer dependent on methadone or any other opiate is a good thing. However too many methadone or opiate treatment clinics keep patience in treatment for years is a detriment to the desired outcome which of course as I stated earlier is to be no longer dependent on any opiate. Treatment plans must include the slow but methodical decrease in dosage.