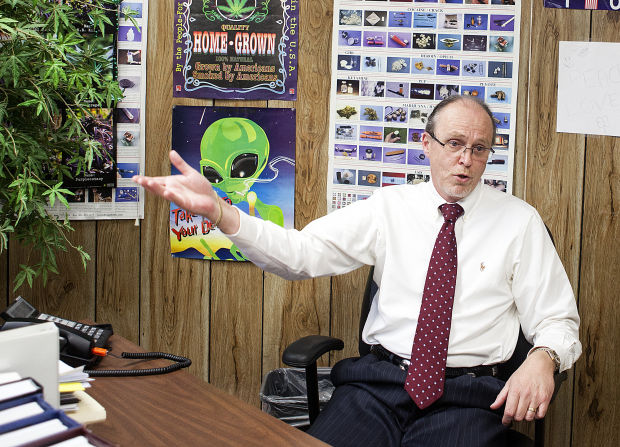 Mark Brooks, Fayette County assistant district attorney, speaks about illegal drugs that are trending in the county. The most prevalent illegal drugs include heroin, cocaine, crack cocaine, meth labs and synthetic LSD, which is also named “the n-bomb.” The n-bomb made an appearance for the first time in Fayette County two months ago. Brooks’ office is decorated with drug-related paraphernalia that he confiscates on drug raids. 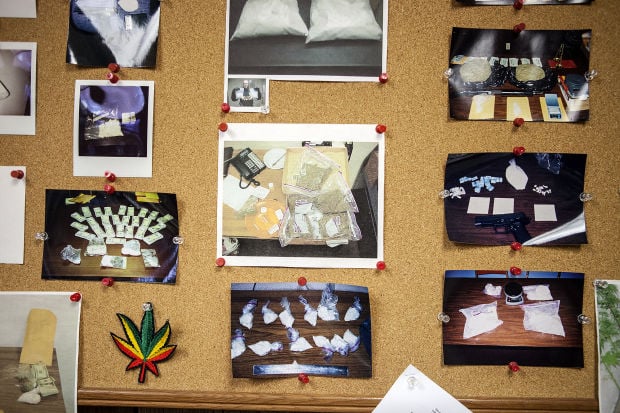 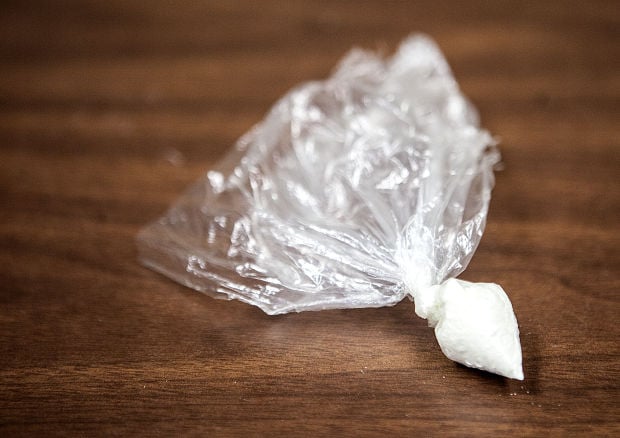 Pictured is a baggie, or “eight ball,” of crack-cocaine.

Mark Brooks, Fayette County assistant district attorney, speaks about illegal drugs that are trending in the county. The most prevalent illegal drugs include heroin, cocaine, crack cocaine, meth labs and synthetic LSD, which is also named “the n-bomb.” The n-bomb made an appearance for the first time in Fayette County two months ago. Brooks’ office is decorated with drug-related paraphernalia that he confiscates on drug raids.

Pictured is a baggie, or “eight ball,” of crack-cocaine.

This article is part of a series of articles examining illegal drugs in Fayette County.

“I do not like the term ‘war on drugs,’ because you can win a war,” Brooks said. “I look at drug work as taking out the garbage. If you carry your garbage to the street each week and put it out for the garbage to be collected, you keep your problem under control. But as soon as you stop taking your garbage out to the curb every week, it starts to pile up and it starts to stink.”

In Fayette County, there are several illegal drugs that are a problem, with heroin at the top of the list.

Other popular drugs include cocaine and crack cocaine, meth labs and synthetic drugs.

One synthetic drug in particular — a synthetic LSD which is called the n-bomb — came onto the scene only two months ago in Fayette County.

“It just took off everywhere recently,” Brooks said. “It’s so new that our (state) Legislature has not had a chance yet to amend the statute to make it a controlled substance. The federal government just passed an act at the end of November making this new drug illegal on a federal level. Our legislature in Harrisburg is now tackling that.”

Synthetic marijuana started trending two years ago, and became popular within the last year, but has since been made illegal, and its use has declined because it’s very dangerous, Brooks said.

“There have been a lot of people who have died from ingesting synthetic marijuana and I think that scared a lot of people away from it,” he said. “Every time we make one synthetic drug illegal they come up with another one.”

Although synthetic LSD is not yet illegal in Pennsylvania, Brooks said people could be charged with a felony for the delivery of a counterfeit substance.

“If I catch you with n-bomb and you’re selling it to somebody, that’s still a crime, even though the drug itself is not illegal, you’re selling what’s called a counterfeit substance — a drug that purports to be LSD,” he said.

He said the chemical composition of the new synthetic drug is perhaps easier to make and not as costly as LSD.

“So that’s starting to be a problem here. We’re starting to make arrests,” he said. “I’m hoping within the next couple months our Legislature will pass a law outlawing this new drug.”

Meth labs are also cropping up in Fayette County.

In September, a nearly 10-hour standoff was ignited in Fayette County when a state Department of Conservation and Natural Resources officer spotted a couple from Buckhannon, W.Va., acting suspicious and detected elements that led him to believe the couple was operating an illegal methamphetamine lab.

“I noticed that they were coming closer to the county because meth labs were discovered by other police departments,” Brooks said. “About two to three years ago, we started to find them here. It’s not a huge problem here yet, but it’s getting worse every year. We’re doing our best to prevent it from becoming a huge problem.”

Brooks said a corporal from the state police regularly trains officers in regard to meth labs.

“Heroin has become more and more of a problem,” he said. “Ten years ago, you couldn’t buy heroin if your life depended on it.”

Now, however, there are known communities in Fayette County where a heroin problem persists.

The heroin problem developed because of Oxycontin. Brooks said a 100 milligram pill of Oxycontin can cost $100. Heroin became very popular once people figured out that it is an opiate-based derivative, costing about $15 a dose — much more affordable when compared to Oxycontin.

“So that’s when heroin blew up again — when people became addicted to Oxycontin,” Brooks said. “Heroin then pushed Oxycontin away to some degree and that’s when the heroin problem became big again.”

Heroin is particularly dangerous because it is physically addicting.

“Although all drugs can be addictive to some degree mentally or physically, heroin is physically addictive,” he said. “Once you start heroin, you’re addicted. They (drug users) don’t want to buy it, they have to buy it. They go from using heroin for recreational purpose, to using heroin just not to feel bad.”

“They say think of the happiest day of your life, the best joke you’ve ever heard, the best sex you’ve ever had, the most enjoyable mood you’ve ever been in you’re entire life, imagine that all at once, all on high for five minutes,” Brooks said. “They say once you feel that you’ll do anything to feel it again. It causes every pleasure center in your brain to fire on full for five to 10 minutes.”

Krokodil — a new drug that has made an introduction but not yet arrived in Fayette County — leaves a reptilian mark on users, according to Time.

Time reports that an addict can cook up krokodil using ingredients and tools bought from the local pharmacy and hardware store. The active ingredient, codeine, is a mild opiate sold over the counter in many countries.

“I’m worried about all drugs making it to this area that aren’t here yet,” Brooks said.

In addition to the yearly training he receives from the Pennsylvania Narcotics Officers Association, Brooks learns about drug trends from the users and dealers themselves.

“Most of my information I get off the street,” he said. “ … From arresting users, from interviewing them, arresting dealers, finding out what they’re selling and what the prices are.”

Illegal drug use not a new phenomenon

While illegal drugs and illegal drug culture often dominate headlines today, how long ago did illicit drug use first become an issue across the country?

Illegal drug use continues to rise in Fayette County

Crime happens all the time. But it is what officials say is most often at the root of these seemingly unrelated criminal incidents that keeps investigators and police scrambling, drug addiction.