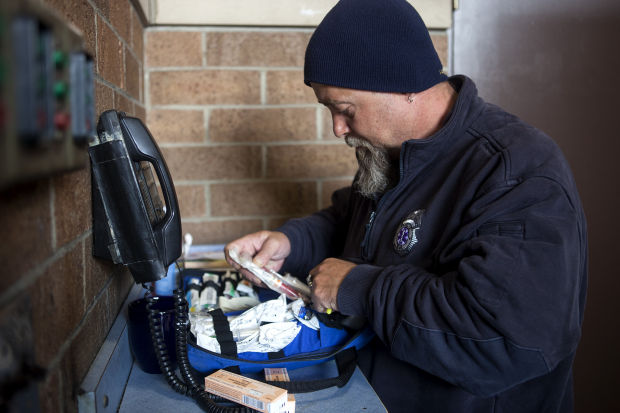 Joe Filitsky of Fayette EMS holds a dosage of Narcan, an injectable drug that reverses the effects of an overdose. 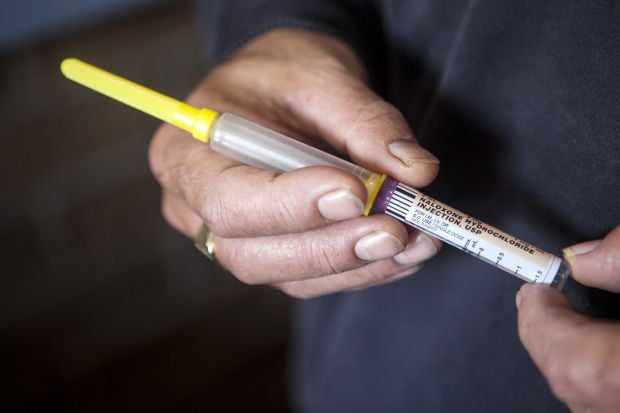 Joe Filitsky of Fayette EMS holds a dosage of Narcan, an injectable drug that reverses the effects of an overdose, in this file photo.

Joe Filitsky of Fayette EMS holds a dosage of Narcan, an injectable drug that reverses the effects of an overdose.

Joe Filitsky of Fayette EMS holds a dosage of Narcan, an injectable drug that reverses the effects of an overdose, in this file photo.

For victims of illicit or prescription drug overdoses, it can literally be a second shot at life.

“We use it all the time,” said Jeff Frye, emergency room doctor at the Uniontown Hospital. “The medics save lives on a weekly basis with it.”

The drug, which is administered as a nasal spray or injected into the muscle, blocks the effects of illegal opioids such as heroin and prescription narcotics like Oxycodone, Vicodin, morphine or Fentanyl.

Narcan reverses the binding of heroin or narcotics at the opioid receptors in the brain that control breathing. “You give (patients) Narcan and they wake up,” said Frye.

However, Frye said, Narcan will not work if a person that overdosed has stopped breathing, at which point there is a maximum of about four minutes before brain and organ damage begins.

“It only works if you give it right away,” said Frye.

The latest statistics from the Drug Abuse Warning Network (DAWN) reported of the approximately 2.5 million drug misuse or abuse emergency room department visits that occurred in the U.S. during 2011, a total of 1,252,500, or 51 percent, involved illicit drugs

While a person cannot use Narcan to get high or to overdose, Frye said, it has more street value than narcotics.

At UPMC Presbyterian Hospital in Pittsburgh, emergency room doctor Michael Lynch said Narcan is not always administered to overdose patients because large doses can make a patient go into withdrawal or have other symptoms.

“We determine if we don’t need Narcan, depending on a patient’s breathing and oxygen levels,” said Lynch.

Over the last year, the high-profile deaths of celebrities Cory Monteith and Philip Seymour Hoffman have raised public awareness of the dangers of heroin addiction.

Fentnyl was also one of the drugs Michael Jackson used, according to his autopsy.

A 2013 report from the Centers for Disease Control and Prevention (CDC) stated that opioid overdose deaths have steadily increased for over a decade and account for 105 deaths each day in the U.S.

Another 6,748 people are treated in emergency departments for the misuse or abuse of drugs, the CDC stated.

Pennsylvania has the 14th highest drug overdose mortality rate in the U.S., with the number of deaths from prescription drugs increasing by 89 percent since 1999, according to the report, Prescription Drug Abuse: Strategies to Stop the Epidemic.

Naloxone has been around since 1971 and is approved by the U.S. Food and Drug Administration (FDA).

Bill Johnson, director of pharmacy at Uniontown Hospital, said the hospital is using more doses of Narcan than in previous years, primarily in the emergency room.

Because of the surge in heroin and opioid deaths sweeping the country, the FDA has approved a hand-held treatment device that delivers a single dose of the drug expected to be available this summer.

Evzio, which works like an EpiPen injector, can be used by the relatives or friends of people who have overdosed.

“Making this product available could save lives by facilitating earlier use of the drug in emergency situations,” said Bob Rappaport, M.D., director of the Division of Anesthesia, Analgesia and Addiction Products in the FDA’s Center for Drug Evaluation and Research.

To one extent, Frye disagrees. “They’re not realizing the value of something like that to the drug culture,” he said.

While Frye said Evzio has its niche, he is uncertain about its extended availability. “You can take a larger dose (of drugs) and not be worried because you have a friend that can bring you back, and, now that you have that crutch, some people are going to go closer to the edge,” he added.

According to Johnson, Evzio is similar in use to defibrillators found in public buildings that, when turned on, will give verbal instruction about how to deliver the medication.

Lynch said he believes Evzio will help save more lives, but people who are using it need to be educated on the drug.

“There’s no guarantee if someone gives it that it will actually work, and they still need to call an emergency medical service,” said Lynch.

U.S. Attorney General Eric Holder said the Justice Department is taking steps to combat the rise in overdose deaths from heroin and other prescription pain killers with a mix of law enforcement and treatment efforts.

As an added measure, Holden is encouraging law enforcement agencies to train and equip their personnel with Narcan.

“When confronting the problem of substance abuse, it makes sense to focus attention on the most dangerous types of drugs,” said Holder. “Right now, few substances are more lethal than prescription opiates and heroin.”

Hospital emergency room physicians and nurses are finding themselves at the front lines of a changing drug culture in treating more patients overdosing from heroin and prescription drugs.

[thumbdown] Norcan gives them a second chance to what, do it again and again?? I do not believe that it should be allowed to be administered. Folks say, what if it was your child??? I have a child that is a drug addict. My granddaughters mother overdosed in my house and she is no longer permitted in my house. I have custody of the child. She was in jail, they sent her to rehab and she was out 2 days and overdosed on the 3rd day out. The drug of their choice means more to them than their own child, let them go, the child will be better off....

This is my opinion, everyone has one. I do not expect anyone to agree with me but that is my thoughts on this subject. They are talking about if they revive you once you get a tap on the fingers telling you that you did a bad thing. If they revive you a 2nd time you get charged with a felony. But I think the penalty should be stiffer that what they are giving.