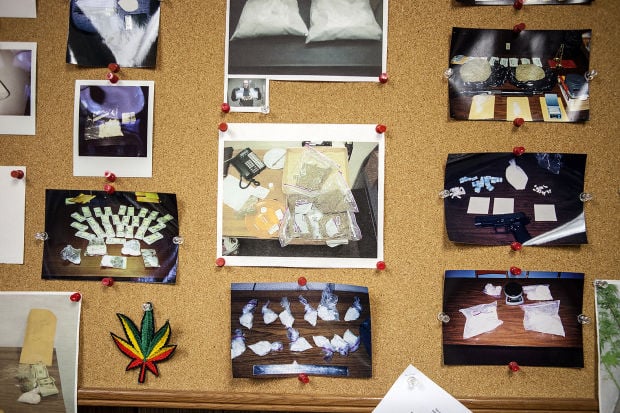 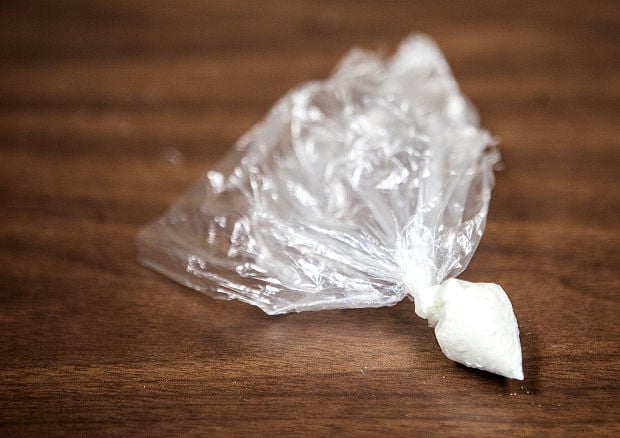 This 2013 file photo shows a baggie, or “eight ball,” of crack-cocaine, according to Fayette County Assistant District Attorney Mark Brooks.

This 2013 file photo shows a baggie, or “eight ball,” of crack-cocaine, according to Fayette County Assistant District Attorney Mark Brooks.

In 2013, the Fayette County Drug Task Force (FCDTF) conducted 162 investigations, each of which resulted in one or more arrests and is on track to compile similar numbers this year.

While the figures may draw concern, they can also be viewed as positive because those that sell drugs and buy drugs are being found and arrested.

“Every county has a drug problem,” said Mark Brooks, task force special prosecutor and assistant district attorney. “However, I believe our county, through the efforts of our task force, more aggressively attempts to deal with it more than other counties.”

While there are numerous illegal drugs being bought and sold in the county, heroin and cocaine are the two most encountered by the task force.

Both can be expensive to buy, especially when the addiction has been ongoing.

The addiction typically results in the users stealing from family and friends to support their habit and ultimately committing other crimes.

Prescription drugs, too, often find their way to the streets and are sold for exorbitant amounts in order for the seller to obtain his or her drug of choice or for the money.

“Grandma gets a box of 10 Fentanyl patches and they sell them on the street for $75 a piece,” said Stephen Cooper, task force captain. “Where can you make $750 that quick?”

Brooks said that drug dealers and users are difficult to identify as they typically do not resemble those seen on television crime shows. Instead, they come from all walks of life, including white collar professionals to mothers and students.

“Drug dealers can be anybody,” he said. “I’ve prosecuted people that have had to carry an oxygen tank up to the stand or used a wheelchair to get to the front of the courtroom.

“It is mostly young people (that sell drugs), but (dealers) are also middle-aged people and older people.

“There is no stereotypical drug user or buyer.”

While it is generally believed that marijuana is the gateway narcotic for most long-term drug use, Brooks said that in is his experience it is minimal.

“However, there are some that will graduate to more powerful and dangerous drugs and would not have done so had they not used marijuana in the first place.”

Long-term drug use does not begin with heroin, Brooks added.

“In all my years as an attorney or in the district attorney’s office, I’ve never heard of someone starting with heroin,” he said.

Most times, it is prescription drug abuse that leads to heroin and cocaine use, added Brooks.

On the front lines

Officers are typically chosen because of their interest in drug investigations and their possession of certain skill sets that make them an asset to the team.

Applicants generally go through an interview process with both Brooks and Cooper.

“In most cases I want the officer to have some experience in felony (arrest) situations,” said Brooks, adding that most municipal police work results in lesser criminal charges being levied against offenders. “For example, officers with a background in finance can aid in forensic accounting work with the bank accounts of drug dealers.”

In addition to being the task force liaison with the county district attorney’s office and other government agencies, Cooper ensures the officers have the resources they need to carry out their work.

The former Connellsville police chief, Cooper was hired two years ago to oversee the task force.

Occasionally, he, too, takes on the role of a drug buyer or seller during an investigation.

However, one of his most difficult tasks is to determine when and how to work with informants, especially those that are serving time in jail for some other crime.

“It’s a Catch-22. You have people that are in jail for some other crime, but they are in a position to do some good,” said Cooper.

Brooks said that the reputation of the task force has sometimes made it difficult to carry out certain activities, including the purchase of drugs to nab those that are selling narcotics in the county.

“We’ve set up buys in a motel or hotel and called the dealer and they have asked if the location is in Fayette County,” he said. “When the answer is ‘yes,’ we’re told to make the location elsewhere.

“It tells me that we’re making a difference.”

Tom Patton, a member of the Connellsville police department, joined the task force about six years ago.

The drug task force work is vastly different than his weekly shifts with the municipal police force as it allows him to better employ his psychology background and developed instincts.

He likens it to a game of sorts where you must get to know the players, their environment, and wants and needs before you enter into their world.

“As a uniformed (local) police officer you are called out to settle a dispute that has been 20 years in the making,” he said. “You are there for 5 minutes and then called back again 20 minutes later to settle it once again.

“With the drug investigations, there is usually a start and a finish.”

Many times, a drug investigation has its beginnings at the municipal level with a traffic stop for a minor infraction, said Patton.

For the officer who takes the time to find out where the driver is coming from or going to, or just enter into a general conversation, they may walk away with piece of information that could be helpful at a later time.

“It is developing intelligence,” said Patton. “It might be small or something big. You might unravel something that you didn’t know existed.”

Brooks said that the FCDTF officers have developed a family-like relationship where they not only work side by side, but also spend time together after hours.

“There is camaraderie,” he said. “We enjoy working with each other.”

Brooks has been with the task force for nearly 23 years and at its helm for 14 years.

He joined the county district attorney’s office in 1991 and was assigned a variety of cases, but it was those that were tied to drugs that he took more interest.

“I tried everything from hubcaps to homicides for a couple of years; even a death penalty case,” said Brooks. “But, it was the drug cases that I gravitated to.”

Like prostitution, drugs are crimes of consent where there is no victim.

“Most crimes, such as murder, there is a victim: someone that says ‘don’t kill me,’” Brooks explained. “A theft: ‘please don’t steal my car,’ or a rape: ‘please don’t rape me.’

“Who is the first person the police want to talk to in those investigations? The victim. The investigator wants to know if the victim knows who committed the crime or what they looked like, where did they go?

So how do you solve a crime when there is no victim, and society and the law demand someone be held accountable?

The answer, said Brooks, is to have your officers take on the role of drug buyers and drug sellers.

“You decide who’s going to be present when the crime is going to happen.”

The officers additionally rely on those willing to provide information or to make the connection with the buyer or seller.

The ability to have some control in the investigation, allows it to have a more successful outcome.

“There are times you have to improvise when things change,” said Patton. “A controlled situation allows you to be more proactive than reactive.”

Brooks, Cooper and Patton agree that drug buying and selling in Fayette County will never be eliminated because the root of the problem — the lack of accountability and respect for others — can not be addressed by the task force.

“Everybody has been stressed over finances.

“There has to be a time when you have to choose between right and wrong and be accountable for that decision.”