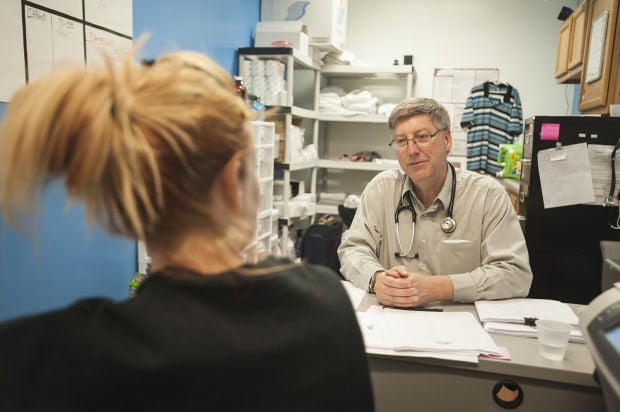 Dr. Paul Hartley speaks with a patient at Addiction Specialist Inc., North Union Township. The success of treatment is dependent upon the addict, Hartley said. 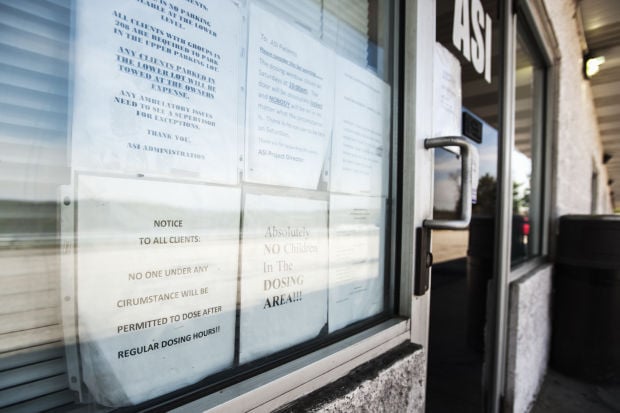 Signs at the entrance to Addiction Specialists Inc. in North Union Township warn clients of some of the rules before entering the treatment facility.

Dr. Paul Hartley speaks with a patient at Addiction Specialist Inc., North Union Township. The success of treatment is dependent upon the addict, Hartley said.

Signs at the entrance to Addiction Specialists Inc. in North Union Township warn clients of some of the rules before entering the treatment facility.

The picture is not pretty, nor are the words encouraging.

For every 100,000 people calling Pennsylvania home last year, 15 died as a result of a drug overdose, nearly double the figure in 1999.

According to a Trust for America’s Health report, the state ranks 14th in having the highest drug overdose mortality rate, and, across the country, deaths resulting from traffic accidents are now second to the number of people that die from ingesting too many prescription pain pills, heroin or cocaine.

“It is a huge problem,” said local physician Dr. Paul Hartley. “In our area, it is heroin, prescription drugs and cocaine that we typically find as being the most used drugs.”

Treatment is complicated, as it typically involves more than one diagnosis, he added.

“They may be bi-polar or have ADHD (Attention Deficit Hyperactivity Disorder) in addition to their drug addiction,” he said. “It becomes tricky because you try to get their brain clean so you can figure out what else is going on.”

For some, the path to addiction starts with an accident or an illness. A fall from a bicycle causes some back pain, or a knee operation leaves the patient in some discomfort, so the doctor prescribes a painkiller.

Unfortunately, what started out as a temporary fix often leads to a long-term addiction to pain relievers or more powerful drugs.

Opiates like Oxycontin, Vicodin and other prescribed pain relievers are addictive if taken over a long period of time. Along with heroin, they are some of the drugs of choice for those seeking a euphoric high.

Hartley said once on that path the choices for abusers narrow; many lose their lives or their freedom because of drugs.

Oscar G., a former drug addict now clean for more than 3½ years, said that the consequences to drug use are only secondary to finding that escape from life’s trials and tribulations.

“It is the only thing you think about,” he said.

He uses an alias in keeping with the 12-step Narcotics Anonymous program that he credits for saving his life.

Oscar G. started on the drug-use path while in elementary school as a way to “fit in.” After a few years of marijuana and alcohol use, he graduated to prescription drugs, cocaine and heroin.

While in between, there were weeks and, at times, months when he was drug-free, it was a struggle.

A stint in a counseling program after being charged with selling marijuana was unsuccessful.

“I smoked pot the whole time I was in counseling,” he said. “They never did a urine screen. There was the threat, but it didn’t happen.”

Occasionally, either by circumstance or choice, some seek out treatment. It is not an easy path to follow, said Hartley, and many stumble or return to their former life because to achieve a drug-free lifestyle requires all of your time, energy and patience.

While some favor the “cold turkey” method, choosing to withdraw from the opiate drugs without the aid of any substances, others choose to rely on methadone or suboxone to help them retreat from the drugs. Suboxone is being used more frequently by doctors or treatment facilities for long-term maintenance.

Methadone was introduced to the U.S. in the late 1940s. Its primary uses today are for the treatment of chronic pain and to treat opiate addictions.

Oral doses of methadone ease the withdrawal symptoms, if taken as prescribed. However, if not taken as scheduled, it can be fatal.

Suboxone came similarly onto the market as a chronic pain reliever. Like methadone, it has a related chemical makeup as heroin and morphine but lacks the euphoric effects of the drugs. Studies have shown that suboxone treatment has been more effective.

Hartley is a proponent of the use of suboxone to transition addicts from a life of drug use to a drug-free life but adds other treatments such as counseling, group therapy and other intervention programs must be a part of the overall program.

“The trouble with methadone is that you have to go every day, especially when you first start,” said Hartley. “As opposed to the liquid methadone, suboxone is a (slow-release) meltable film that allows us to bring you back once a week.”

Finding a treatment can be difficult, as most heroin addicts are also taking different prescription drugs or consuming alcohol at the same time.

For instance, methadone taken with Valium, Xanax or a similar prescription drug or alcohol can cause the addict to stop breathing because of its effect on the respiratory system.

“They are on the methadone to get off the drugs but are taking something else,” said Hartley. “It doesn’t work.”

The success of treatment is dependent upon the addict, he added.

“You have three choices,” he said. “You can end up dead; end up in jail for a significant period of time or you can stop doing it.”

Sadly, only five percent or one out of 20 drug addicts take the path to end their dependency.

Saved by grace...a journey of drugs and found hope

Oscar G is a survivor.

He is not shy about sharing his story as once it was filled with darkness and fear, but today it is bright and filled with hope.

For nearly four years Oscar G has been drug free and alcohol free. It was not an easy journey to recovery and still there are certain days that tap his mind, soul and body to get by.