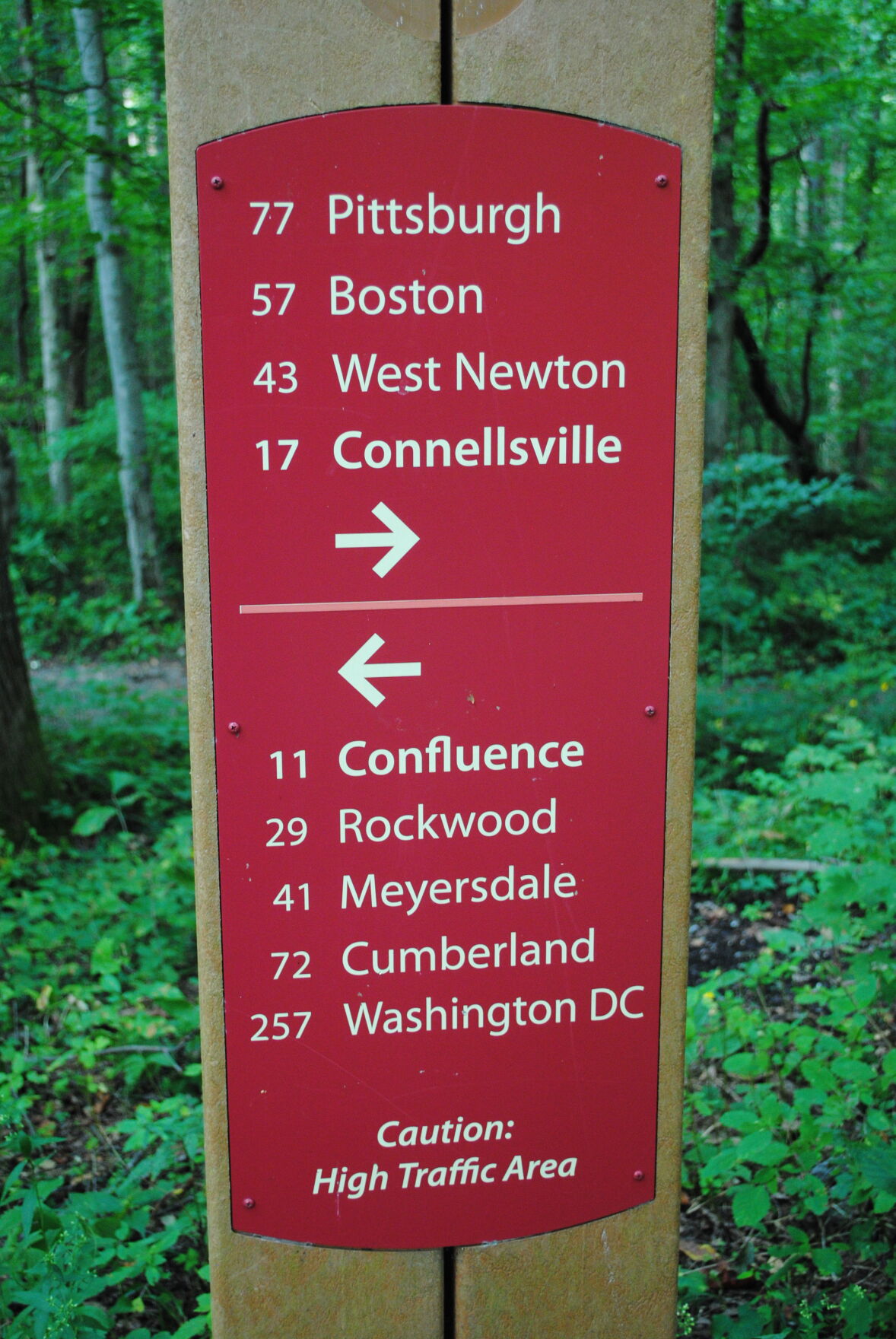 A mileage sign is shown along the Great Allegheny Passage. 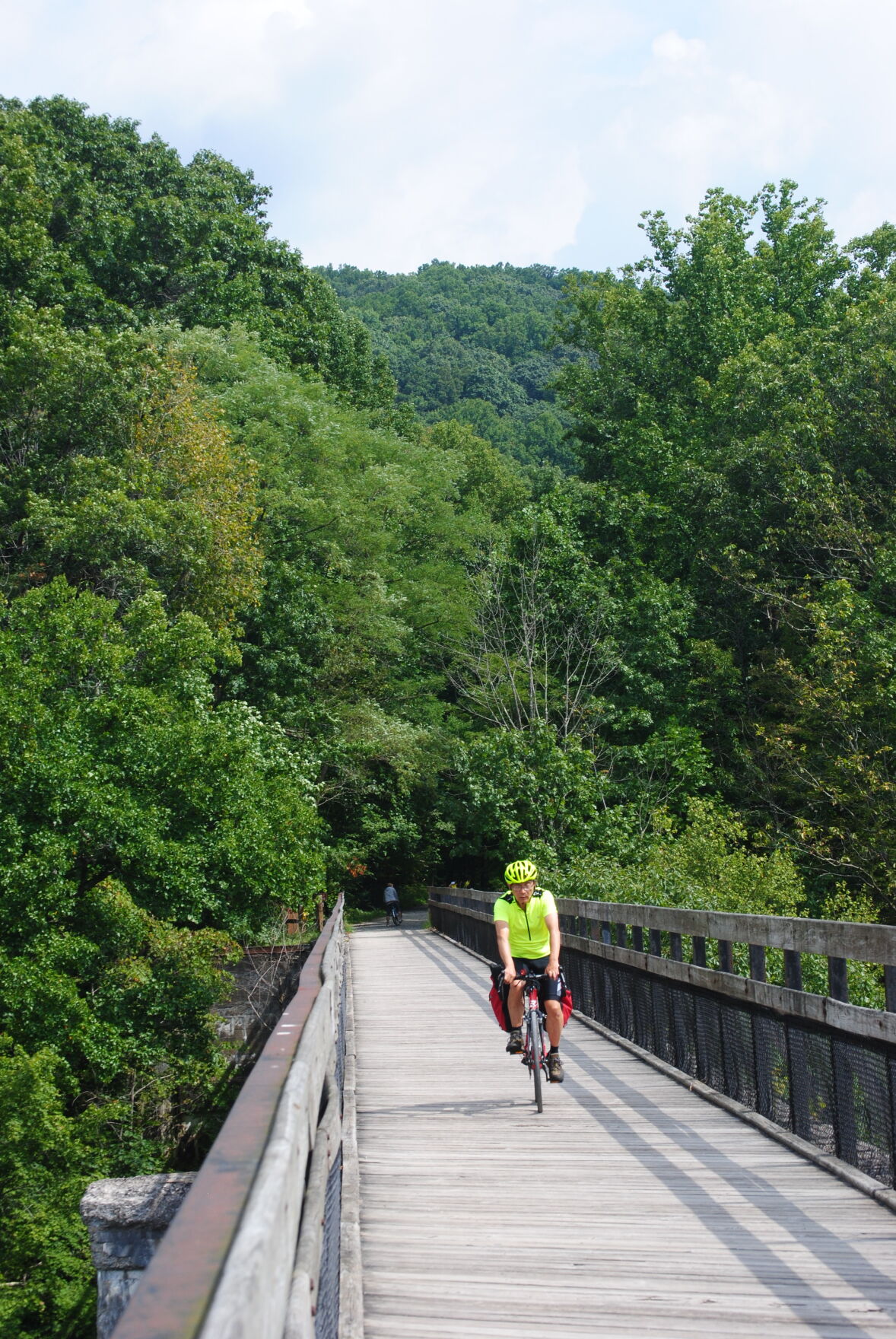 A cyclist on the Great Allegheny Passage crosses the high bridge over the Youghiogheny River at Ohiopyle. A St. Vincent College survey determined that as many as 1.6 million people enjoyed cycling or hiking along the GAP in 2020.

A mileage sign is shown along the Great Allegheny Passage.

A cyclist on the Great Allegheny Passage crosses the high bridge over the Youghiogheny River at Ohiopyle. A St. Vincent College survey determined that as many as 1.6 million people enjoyed cycling or hiking along the GAP in 2020.

For some reason, we don’t think of our region as a destination for others. To us, this is home, familiar, even humdrum. Excitement and diversion, we assume, are elsewhere — at the shore or some big city.

But unless you live right in what’s become known around here as a “trail town,” you might miss the obvious truth that this is a place to be for growing thousands of visitors from around the country and the world. While we locals often want to get away, we’re outnumbered by people who desire to come.

Their reasons are diverse, but one standout draw is a recreational, economic, and environmental asset of international import—the Great Allegheny Passage. Many of we locals just call it “the bike trail,” but it merits consideration of its true title; that’s part of the allure it holds for visitors.

The Great Allegheny Passage (the GAP) is a 150-mile trail for non-motorized use — primarily bicycle and foot, but also open to horseback travelers in limited zones, spanning the Allegheny Mountains between Pittsburgh and Cumberland, Maryland. There just are not many things like it in the world, where a person can travel for days between two cities, through appealing — even breathtaking—surroundings, free from the noise and danger of motorized traffic, absorbing the natural and cultural history of an important region along the way.

A couple of trail-user comments posted on the GAP website testify to the path’s importance. “We cycle a lot of trails all over the United States,” wrote one traveler. “This is the best trail in the U.S.”

“We are from Spain, Barcelona. Awesome trip. Two years in the planning,” wrote another.

A survey of GAP users done last year by St. Vincent College concluded that between 1.1 and 1.6 million people used the trail in 2020. About 10 percent of those were making long-distance, multiday rides, spending money in trail towns along the way.

Besides its length, another appeal of the GAP is the flexibility it offers users. You don’t have to do a heroic hundred-mile odyssey to enjoy it. Easier options for users are rooted in the GAP’s history. Almost the entire route was once a railroad line, connecting towns and cities as the track-layers sought the easiest grade through a rugged landscape. Naturally, the tracks followed the Casselman, Youghiogheny, and Monongahela rivers, which had already carved a path through the ridges.

The rail line linked places like Connellsville, Confluence, Ohiopyle, Layton, West Newton, and many others. So today, riders can make short day-trips between trail towns and still sense the GAP’s unique splendor. The most popular stretch of the entire GAP is also one of the most visually spectacular. It’s the 9-mile trip through the deepest river gorge in Pennsylvania, between Ohiopyle and Confluence, where Youghiogheny whitewater, trailside waterfalls, and soaring bluffs spice every foot of the journey.

That same stretch of trail was the first piece of the GAP ever completed. In 1978 the Western Pennsylvania Conservancy purchased the 27-mile span of abandoned railway between Connellsville and Confluence from the Western Maryland Railway Company. The 9-mile Ohiopyle to Confluence section opened to riders in 1986, and its popularity spurred the rest of the trail’s completion.

The GAP is “user-friendly” everywhere. Its surface is fine-crushed limestone and most its grade can scarcely be noticed while pedaling a bike. The steepest section is between Cumberland and Deal in Somerset County, where the grade reaches 1.75 percent as the trail ascends (westbound) or descends (eastbound) the Allegheny Front. The grade over most of the 150 miles is less than one percent.

Herald Standard columnist Jack Hughes writes about his adventures along the GAP often, the interesting people and the wildlife he encounters. At the 2019 Christmas Bird Count based in Ohiopyle, enthusiastic birders wanted to add a bald eagle sighting to the list of birds logged. Someone suggested a careful look in the river corridor along the GAP, then spotted three bald eagles soaring over the river within minutes.

Some visitors use the GAP for endurance exercise, while others use it to reach other delights. Fishermen lean their bikes against trees while they cast for rainbow and brown trout, and wildflower enthusiasts admire spring blooms.

The GAP is a testament to dedicated local people recognizing something special and offering their time, effort, and often their money to build and maintain for a greater good. Although state agencies have played an important role in the GAP, it would not be there without the work of dozens of volunteer groups and individuals in towns along the corridor, who built and care for the trail every day, so that others can enjoy it. Those groups share their common interests as the Great Allegheny Passage Conservancy, formerly known as the Allegheny Trail Alliance.

Soon, the Sheepskin Trail, already completed through portions of Point Marion Borough, South Union and Dunbar townships will link the GAP to Morgantown and a popular system of trails throughout West Virginia. As coal and steel were this region’s identity in past generations, the amazing appeal of the GAP and linked trails will be its future trademark to the world.