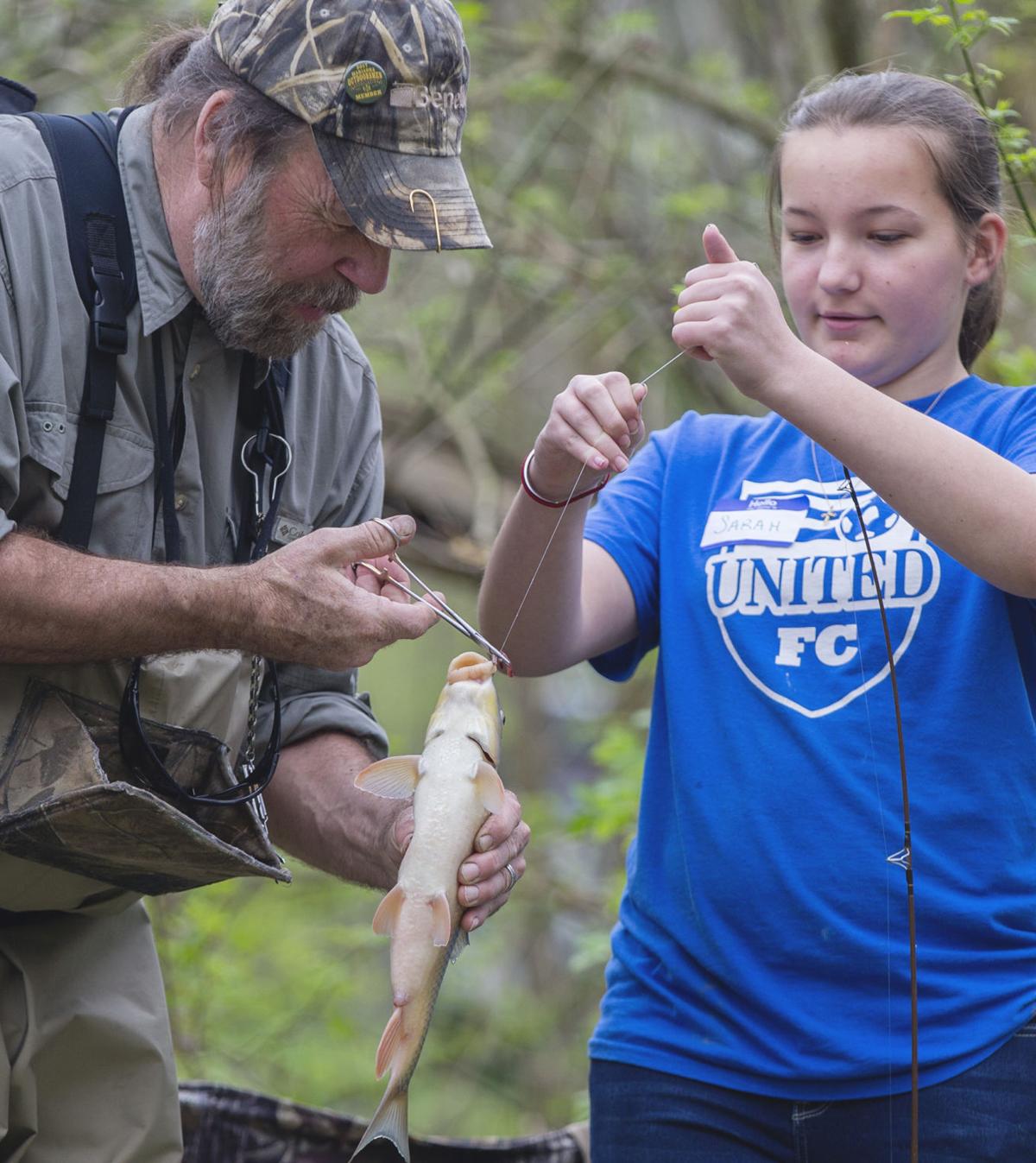 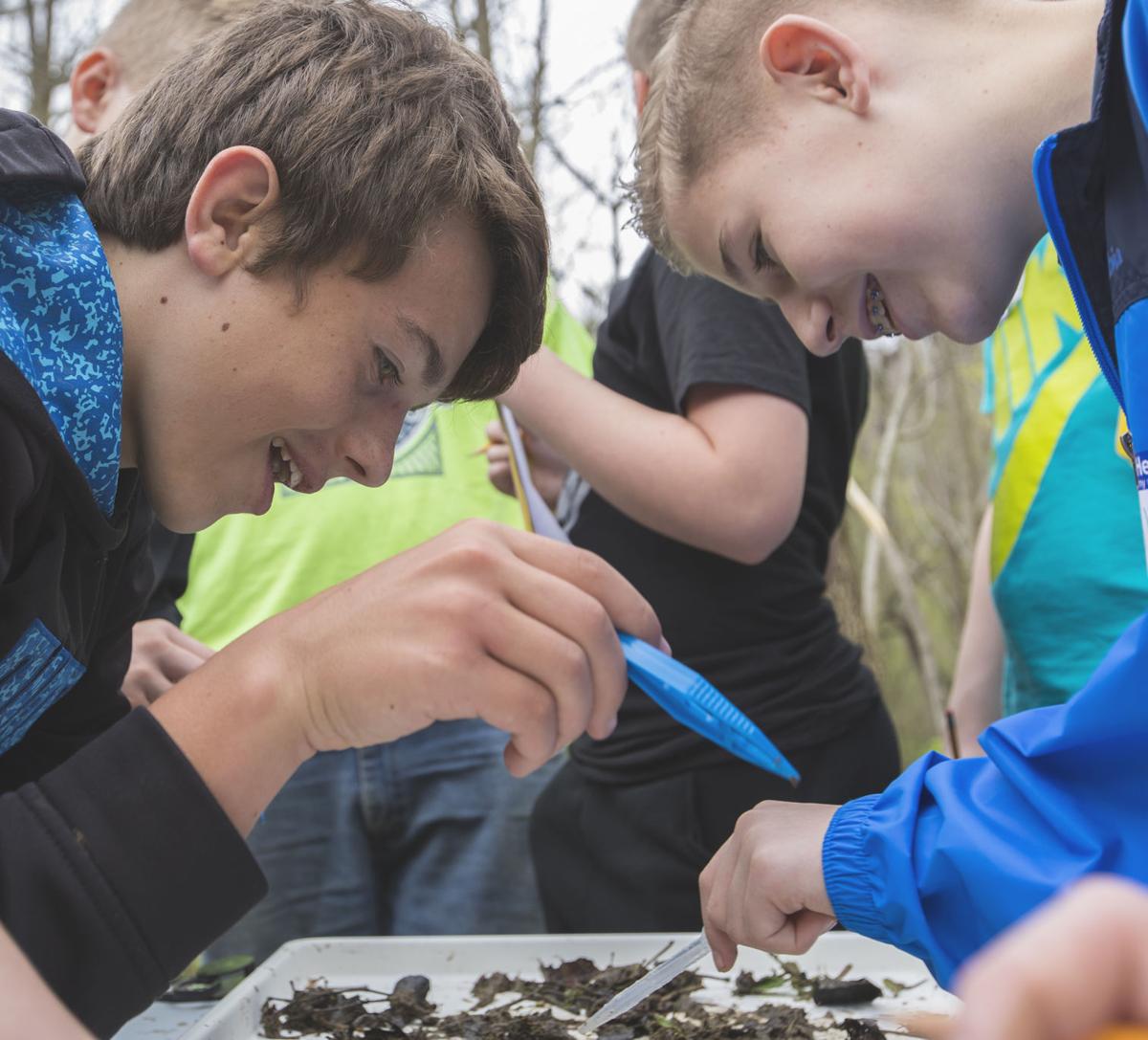 Ruben Miller of Denbo, left, and Blake Shashura of Fredericktown, right, look at specimens collected in a kick net from Ten Mile Creek during an exercise where Beth-Center seventh-grade students learned about creek ecology and how to perform tests and surveys to measure a creek’s health. 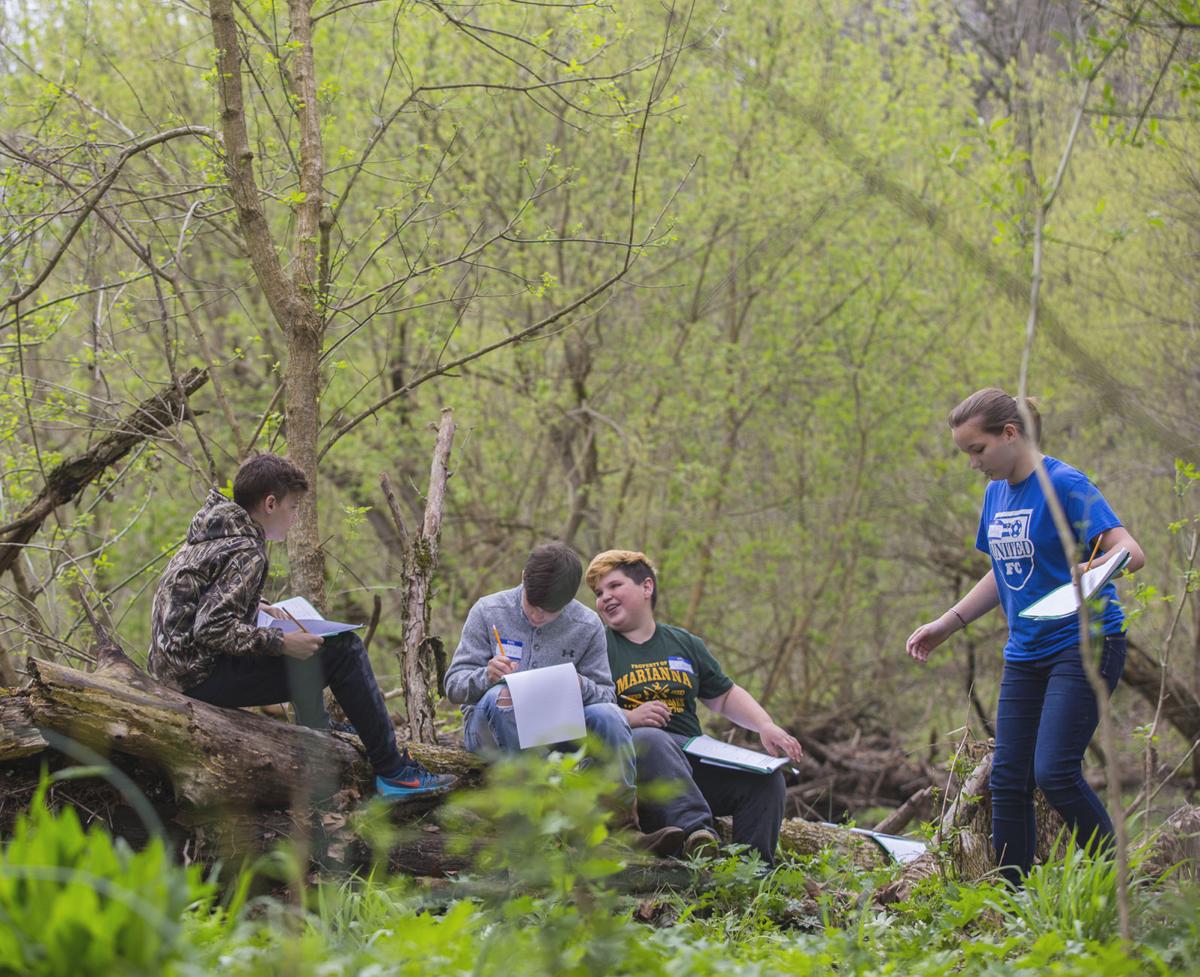 From left, Jason McClellan, Drew Ivcic, Coby Watson and Sarah Paci, all seventh-grade students at Beth-Center Middle School, fill out their notes after testing the water temperature of Ten Mile Creek in Marianna during a creek conservation field trip.

Ruben Miller of Denbo, left, and Blake Shashura of Fredericktown, right, look at specimens collected in a kick net from Ten Mile Creek during an exercise where Beth-Center seventh-grade students learned about creek ecology and how to perform tests and surveys to measure a creek’s health.

From left, Jason McClellan, Drew Ivcic, Coby Watson and Sarah Paci, all seventh-grade students at Beth-Center Middle School, fill out their notes after testing the water temperature of Ten Mile Creek in Marianna during a creek conservation field trip.

For nearly 150 students from Bethlehem-Center Middle School, a field trip to Ten Mile Creek last Friday was more than just a science lesson. It also gave them a chance to help replenish Pennsylvania’s brook trout population and safeguard the state’s environment.

Seventh-grade science teacher Tait Klein said the project evolved from an idea that was presented to the Beth-Center School District by Jason White, one of the founding members of the nonprofit Marianna Outdoorsmen Association, who now serves as chief of staff for state Rep. Bud Cook, R-Coal Center.

“Jason contacted our superintendent several years ago and offered to help us get involved in the Pennsylvania Fish and Boat Commission’s Trout in the Classroom program,” she said. “There aren’t that many schools in the area that are raising trout in the classroom and we jumped at the opportunity to do this.”

A statewide initiative for students in grades 3-12, the Pennsylvania Trout in the Classroom program helps students learn about coldwater conservation while raising brook trout from eggs to fingerlings in a classroom aquarium.

“There was a lot of excitement when the Fish and Boat Commission delivered 270 trout eggs to our classroom last November,” said Klein. “We kept the fish in a 55-gallon tank, where our students could observe the entire growth process. Once the hatchlings became 3-inch-long fingerlings, we were ready to release them in a state-approved waterway.”

The trout stocking event was originally scheduled for April 7 but had to be postponed because of inclement weather. Rep. Cook decided to reschedule the event on April 21 to coincide with his district’s 2017 Great American Clean Up of Pennsylvania activities.

During the outing, Cook joined students at Ten Mile Creek County Park near Clarksville, where they stocked 110 fingerlings into the water, along with more than 100 fully grown fish that were purchased by the Marianna Outdoorsmen Association.

Cook feels that Trout in the Classroom goes beyond sustaining the fish that live in the region’s wide expanse of creeks, streams and rivers.

“There are many benefits to this program,” said Cook, who also serves on the Game & Fisheries Committee for the Pennsylvania House of Representatives. “Besides replenishing our state’s supply of trout, this program is helping to improve the quality of life for our young people. It’s a great opportunity for kids to step out of the classroom, get away from their computers and connect with our natural resources.”

Added Cook, “The more we get youth involved in outdoor activities at an early age, there’s a better chance many of them will apply for hunting and fishing licenses. That’s important to ensure that our fishing and game commissions will continue to generate revenues from license sales.”

Klein pointed out that her students are learning the importance of becoming good stewards of the environment.

“Unfortunately, our area’s creeks, streams and rivers are experiencing problems due to drainage from old mines and littering,” she said. “And we know that can adversely impact the environment. Beth-Center’s students are learning that everyone plays an important role in keeping our environment clean and safe.”

Billy Blayney, 14, a seventh-grade student at Beth-Center Middle School, is concerned about the effects of pollution on the aquatic environment.

“It’s sad to see trash floating in the water. That’s not good for the fish and other wildlife. Hopefully the cleanup that’s taking place today will help to preserve the environment,” he said.

Cook said he was proud of how the area’s young people pulled together to make the Great American Cleanup such a huge success.

“It’s great to see so many youth taking ownership in cleanup projects such as this one,” he said. “They are helping to pick up litter and trash along roadsides, streams, parks, forests and neighborhoods. That’s a positive reflection on our communities.”

Klein thanked the Marianna Outdoorsmen Association, which provided financial assistance for the Trout in the Classroom program.

“We couldn’t have done it without the Marianna Outdoorsmen Association,” said Klein. “They donated $3,200 to help pay for the fish tank and other supplies.

“In addition, we are grateful to EQT Foundation for providing funding to buy the fully grown fish for the stocking event. We hope to do this project again.”