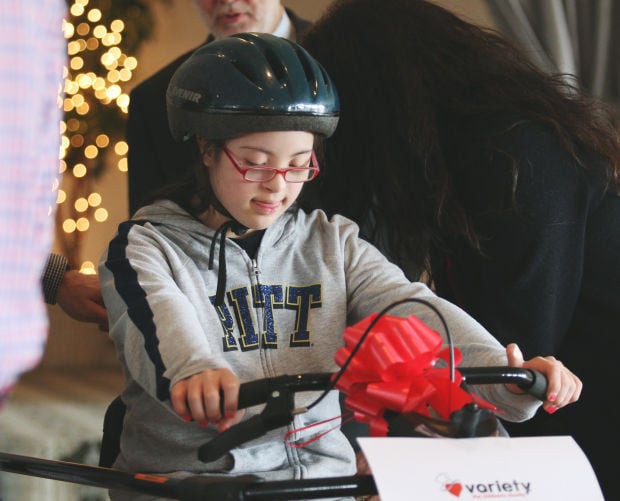 Aubrey Leiendecker, 14, tries out her new bike on Tuesday afternoon. 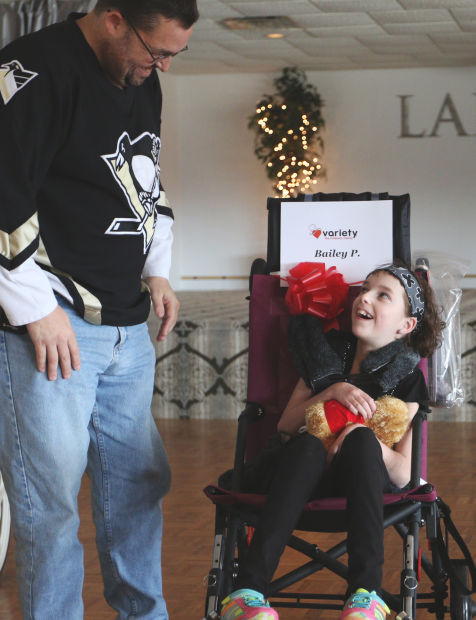 Bailey Pritts, 13, looks up at her father Earl Pritts of Mill Run after being set up in her new stroller. 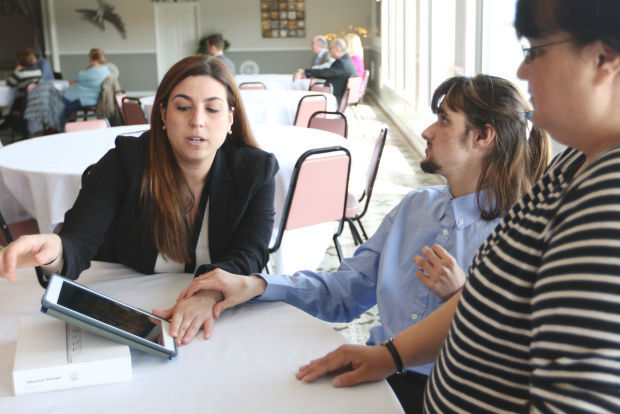 Shayna MacCleary, left, shows Susan Shroyer, right, how to set up an iPad to help Sebastian Shroyer, center, to communicate.

Aubrey Leiendecker, 14, tries out her new bike on Tuesday afternoon.

Bailey Pritts, 13, looks up at her father Earl Pritts of Mill Run after being set up in her new stroller.

Shayna MacCleary, left, shows Susan Shroyer, right, how to set up an iPad to help Sebastian Shroyer, center, to communicate.

After a couple of years on the sidelines, Aubrey Leiendecker of South Union Township is riding a bike again.

Her face lit up as an audience of local residents and officials warmly applauded the 14-year-old girl's first ride on her new, raspberry-pink adaptive bike during a special presentation Tuesday afternoon at Lakeside Party Center in German Township, hosted by Variety, The Children's Charity, based in Wexford, Pa.

“Aubrey loves to be outside and exercise,'' said her father Stephen Leindecker, explaining his daughter, who has Down's Syndrome, has been unable to ride a bicycle for a few years because she needs training wheels that are not available on regular, bigger bicycles. “We're very blessed to get this bike. We want to thank everyone involved.''

With the coming of spring, mother Angela Leiendecker anticipates the family, which includes two older daughters, will now be able to take outings together.

“She's going to have a blast exercising and being more independent,'' said Angela Leiendecker of her daughter, an eighth-grade student at Laurel Highlands Middle School.

With more applause from the audience, Variety also presented an adaptive stroller to Bailey Pritts, 13, of Mill Run and a communications device to Sebastian Shroyer, 20, of Nicholson Township. Both youths previously received adaptive bikes from Variety, and their families offered advice and encouragement to the Leiendecker family.

Charles LaVallee, Variety's chief executive officer, expressed as much joy as the families and readily explained the significance of the gifts.

LaVallee explained the communications device, an iPad, helps youths who are non-verbal to communicate.

“Isn't communication one of the fundamentals of life?'' he asked.

Susan Shroyer, mother of Sebastian Shroyer, who attends Western Pennsylvania School for Blind Children in Pittsburgh, remarked, “I want to know what he wants. Right now, I guess. Maybe he doesn't feel well. I would like to hear him say, 'I love you.'''

Bailey Pritts' parents, Earl and Wendy Pritts, and grandmother Dorothy O'Donnell were thrilled by the stroller.

Wendy Pritts noted her daughter, a sixth-grade student at Springfield Elementary School who has several medical issues, is able to walk but tires easily.

“She doesn't have stamina for long distances. With this stroller, she's able to walk when she wants to and ride when she wants,'' said Wendy Pitts, noting the family can now go on outings, such as trips to amusement parks.

LaVallee pointed out that wheelchairs are heavy, while an adaptive stroller, which weighs 28 pounds, can be easily hauled to a variety of places, making it an important companion piece for youths who do use wheelchairs.

Tuesday's presentation was held not only to distribute these gifts but to also find more children who could use them.

“It would be tragic to have a child who could benefit from this bike not get it for lack of knowledge,'' he said.

That meant the inclusion of local officials, such as Fayette County Commissioner Angela Zimmerlink, German Township Supervisor Dan Shimshock and Albert Gallatin School District Superintendent Carl Bezjak and special education director Sheri Dunham, who were happy to learn about the programs. George Rattay of Pipefitters Union Local 354, who has been helping get the word out about Variety, also appeared to show support.

While My Stroller and My Voice are both pilot programs, Variety has offered the My Bike program since November 2012, giving away 750 adaptive bikes but having 250 more available for youths between 4 and 21 who have a disability and reside in Variety's region, which includes 26 counties in western Pennsylvania and West Virginia. They must also meet income guidelines, which are generous.

Wendy Pritts noted, “We're a one-income family. We'd never be able to afford the stroller in a million years. This is huge for us. It gives us an opportunity to do things we couldn't. It provides a little normalcy.''

LaVallee also thanked the Uniontown-Chestnut Ridge Rotary Club, which sponsored the adaptive bike for Aubrey Leiendecker. This is the second one sponsored by the club, which has about 20 members.

Alan Laick, president, who was at Lakeside with other Rotary members to cheer on Aubrey Leiendecker, said, “It's always fulfilling when you give back to the community and can help a family. It's a warm feeling.''

Equipment is presented on a first-come, first-served basis.

More information on how to apply for the equipment or donate to the program, visit Variety's website at www.varietypittsburgh.org.