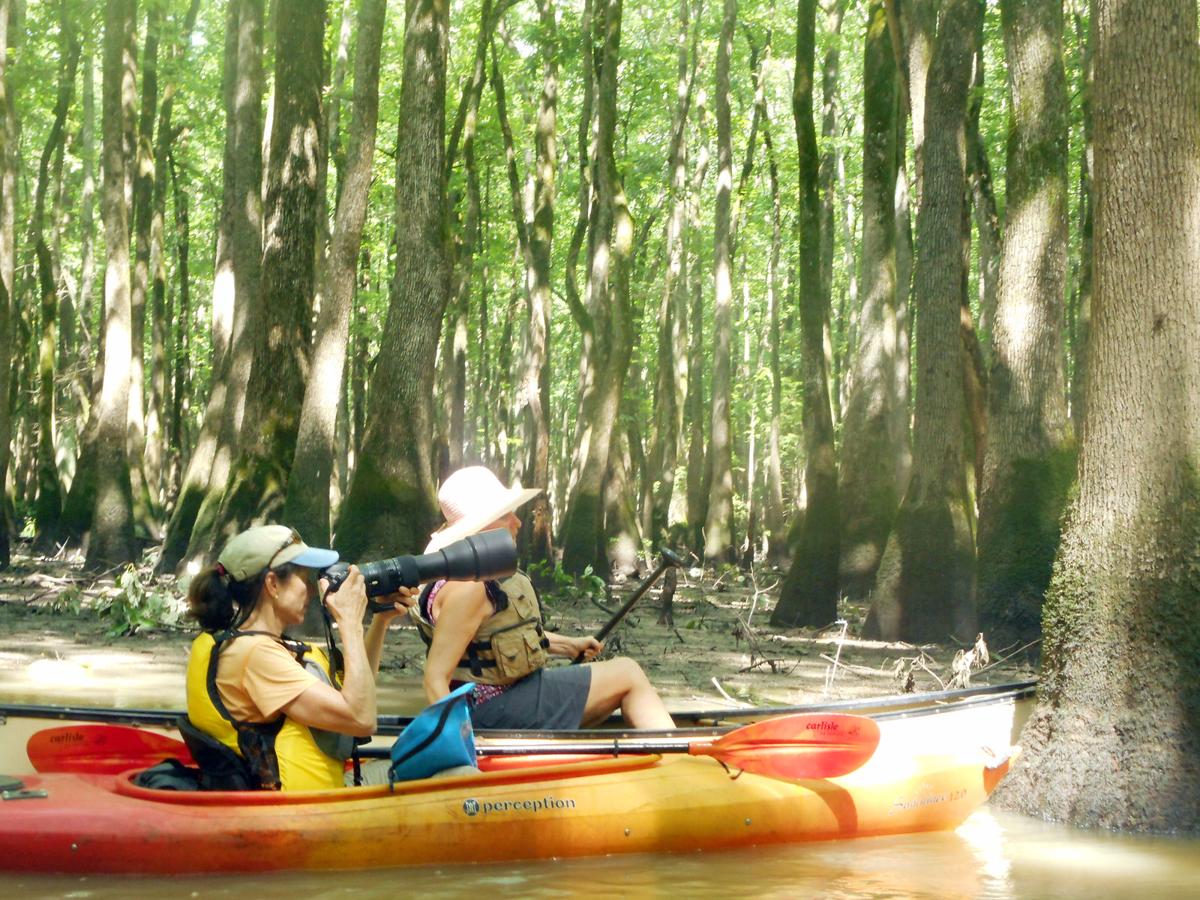 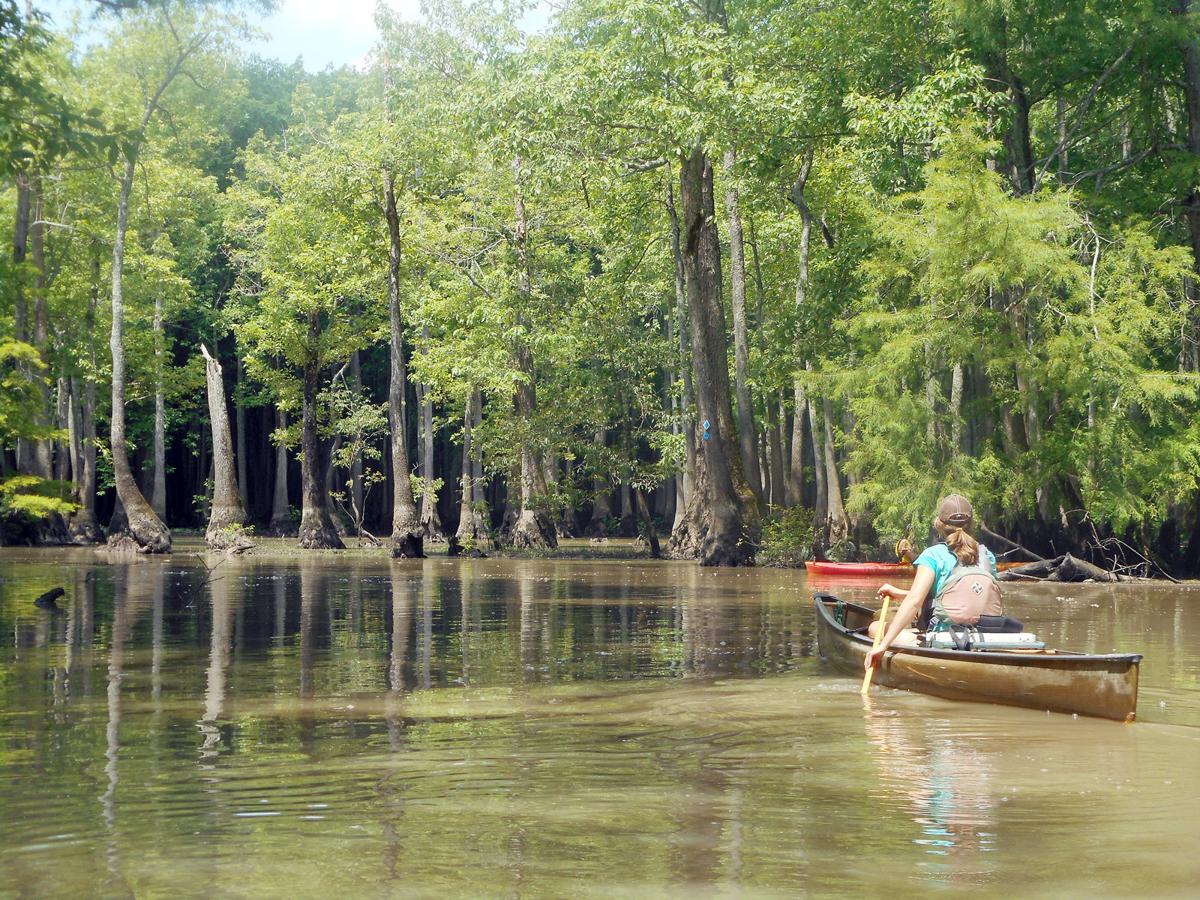 For an Allegheny uplander, central Arkansas requires an adjustment. Here at home, the woods are always above you — on the ridges and hills, and farmers till the valleys. But think the reverse on the Arkansas prairies. There, forest grows down low, in stream channels and floodplains too wet to farm. Roughly speaking, if a stream channel is broad enough to get lost in, it’s called a bayou, a French word for swampland.

I learned this last month when the Outdoor Writers Association of America (OWAA) held its annual conference in Little Rock, Arkansas, an appealing state-capital city with a small-town feel. To show off their state to visiting writers, staff from the Arkansas Game and Fish Commission offered to guide a small group through Bayou De View, a meandering swamp through which volunteers have marked a route with blue-diamond markers, about the dimensions of a deck of cards.

Only Lisa Ballard, an Emmy-winning adventure TV producer/host and writer from Red Lodge, Montana and I accepted the offer. Still, the Game and Fish folks were enthusiastic and accommodating. They picked us up at the conference hotel—kayaks and canoes loaded — then drove 60 miles east to the Benson Creek access to Bayou De View.

Swamps get a bad rap in the modern imagination, linked to the undesirable and negative. But, seen up close with an open mind, Bayou De View is an amazing place. Giant cypress trees loom everywhere, some so old they first sunk roots in the ooze a thousand years in the past. Broad-based tupelos and maples fill in between the cypress, while dark water spreads to the limits of vision. Bird calls, some familiar and some new, echo through the trees and, now and then, a mysterious “splash” interrupts the quiet, source unknown.

“I’ve had friends and family come from out of town and they’re blown away,” said Kirsten Bartlow, water trails and watchable wildlife coordinator for the Arkansas Game and Fish Commission. “It feels like you’re stepping back in time. It’s got huge old trees, wildlife and it’s different each season.”

Our Bayou De View excursion followed a 15-mile “trail” defined by the blue diamonds, one nearly always visible on a trunk ahead. Otherwise, without the markers, there would be no way a newcomer — or even many natives—could find their way through the watery labyrinth of cypress and still water. It’s all wild and enchanting, but everything looks the same.

“We chose the blue diamond-shaped trail markers because of their size — big enough to see while paddling along a trail, but not so big as to detract from the scenery,” Bartlow explained. “The blue tied in with the water trail theme and is easy to spot among the browns and greens of the bayou. The markers also have a white reflective border for a paddler, duck hunter or angler that might find themselves on the trail in the dark.”

Bayou De View is one of 13 officially designated water trails, developed by Arkansas Game and Fish and the volunteer Arkansas Water Trails Partnership to encourage safe, enjoyable recreational paddling in a variety of settings.

Pennsylvania has a similar network of designated water trails, established by our Fish and Boat Commission, Dept. of Conservation and Natural Resources, and local volunteer organizations. All our water trails are along streams and rivers, where paddling is a one-way trip — downstream only. But paddling through a bayou offers different options.

“The nice thing about flat-water paddling is you don’t need a shuttle; there are fewer logistics,” Bartlow said.

Our trip took advantage of that flat-water attribute. We paddled to a swath of open water called Stab Lake, because, as Bartlow explained, from the air it looks like a rifle with bayonet attached. At Stab Lake we reversed direction and paddled back to our put-in along the same trail, winding back and forth across the boundaries of the Cache River National Wildlife Refuge and the Dagmar State Wildlife Management Area. Except for a few unforgettably huge cypresses I recalled, I couldn’t tell we were passing through the same stretch of bayou in the opposite direction.

When I pointed out a big hole about the size of a closet door in a cypress trunk, Jeff Williams, a communications specialist with Arkansas Game and Fish, told me black bears often climb up and den in such cavities during the winter. That made sense because there is no dry land in the bayou for denning, and if a bear leaves the bayou, there are no woods beyond.

Other big cypress were open at the base, suggesting a chapel, or a least a shelter you could paddle your boat inside to escape the rain.

When Williams gestured for me to scull alongside his kayak, I followed his pointing finger to a dark brown spider whose legs stretched across four inches of cypress trunk.

“It’s a fishing spider,” Williams said. “You can actually hear them scrabbling around on the tree bark.”

He was right. The big spider made nearly same sound as a squirrel moving over bark.

According to one website I consulted, fishing spiders rest their back legs on floating wood while extending their front legs over the water. When they sense a small fish, they grasp it, or dive underwater to capture the prey.

Our route took us near the place where, about 10 years ago, the believed-to-be-extinct ivory-billed woodpecker was thought to be re-discovered. Some researchers saw and heard a large woodpecker they identified as an ivory-billed, which resembles the abundant but smaller pileated woodpecker. But no further evidence of the ivory-billed has ever been found, and the sighting is now in doubt.

“If you want to see woodpeckers, go to the big woods like these,” Bartlow said. “I’ve paddled up on sleeping otters on a submerged log, and I’ve seen pairs of bald eagles come back year after year to their nesting sites.”

Our most exciting wildlife encounter was with a cottonmouth. Semi-aquatic relative to our copperhead, the venomous cottonmouth is known for a sometimes pugnacious personality. They don’t like to surrender their personal space. When our route passed through its fishing grounds (cottonmouths feed largely on fish and frogs), it refused to flee. Instead, it swam stubbornly along the sides of our boats and sometimes attempted climbing over the gunwales.

An accomplished photographer, Lisa Ballard trained her lens on the snake, but a kayak is an unsteady platform for twisting around to shoot a moving subject.

“Could you hold my boat steady?” Lisa asked.

I pulled my canoe alongside, jammed the paddle into the muck for anchorage and stabilized Lisa’s craft. She got some great close-ups, and we left the snake perturbed but unharmed.

Williams and Bartlow quipped that if they wanted visitors to come and see Bayou De View and Arkansas’ other water trails, they perhaps shouldn’t have shown us a cottonmouth and a spider with a 4-inch leg span.

But those things are all part of the adventure and allure of wild places, and Arkansas, “The Natural State,” offers all kinds of outdoor experiences—including the Ozark Mountains where trees grow high on the ridges like here at home.