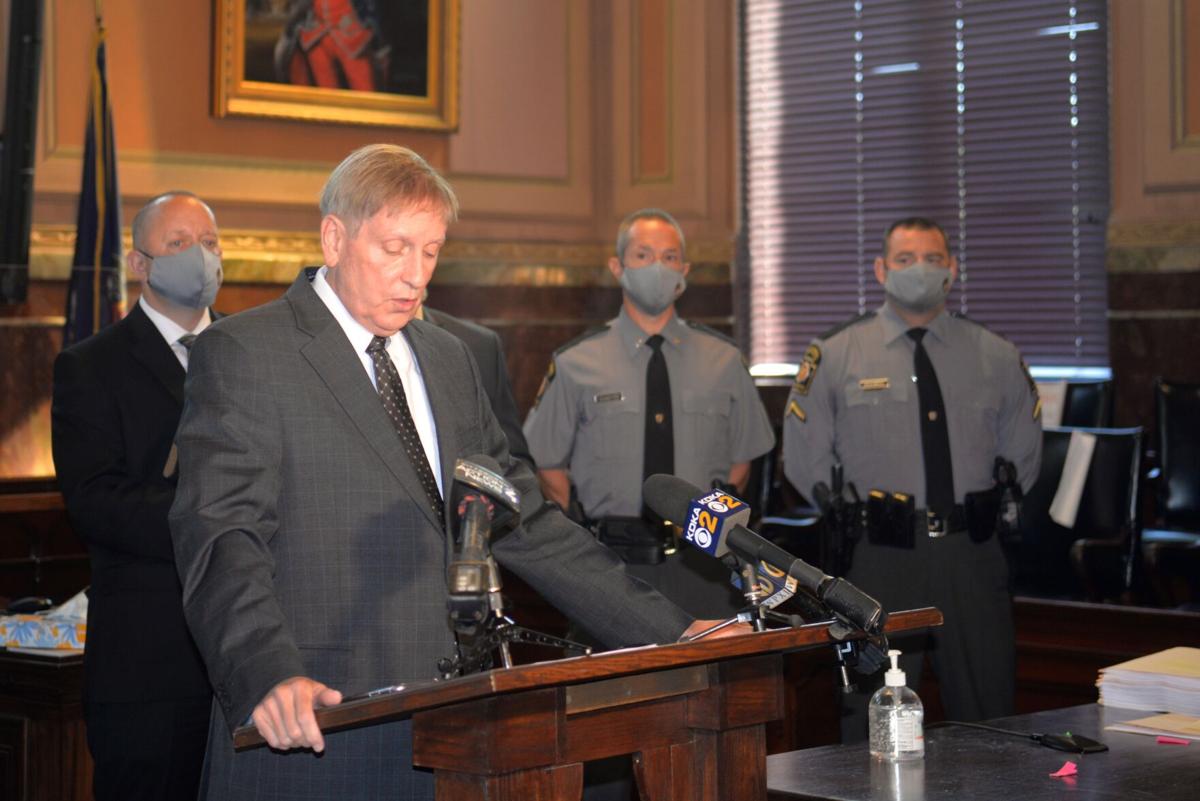 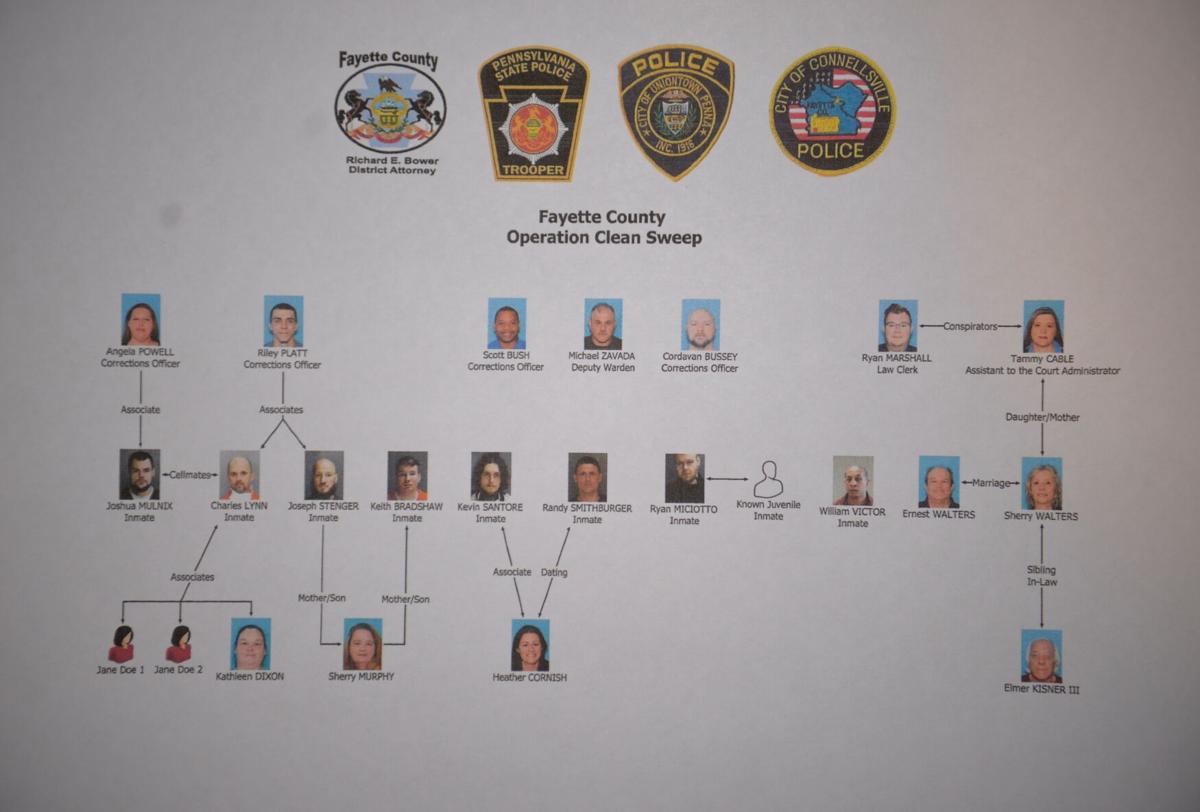 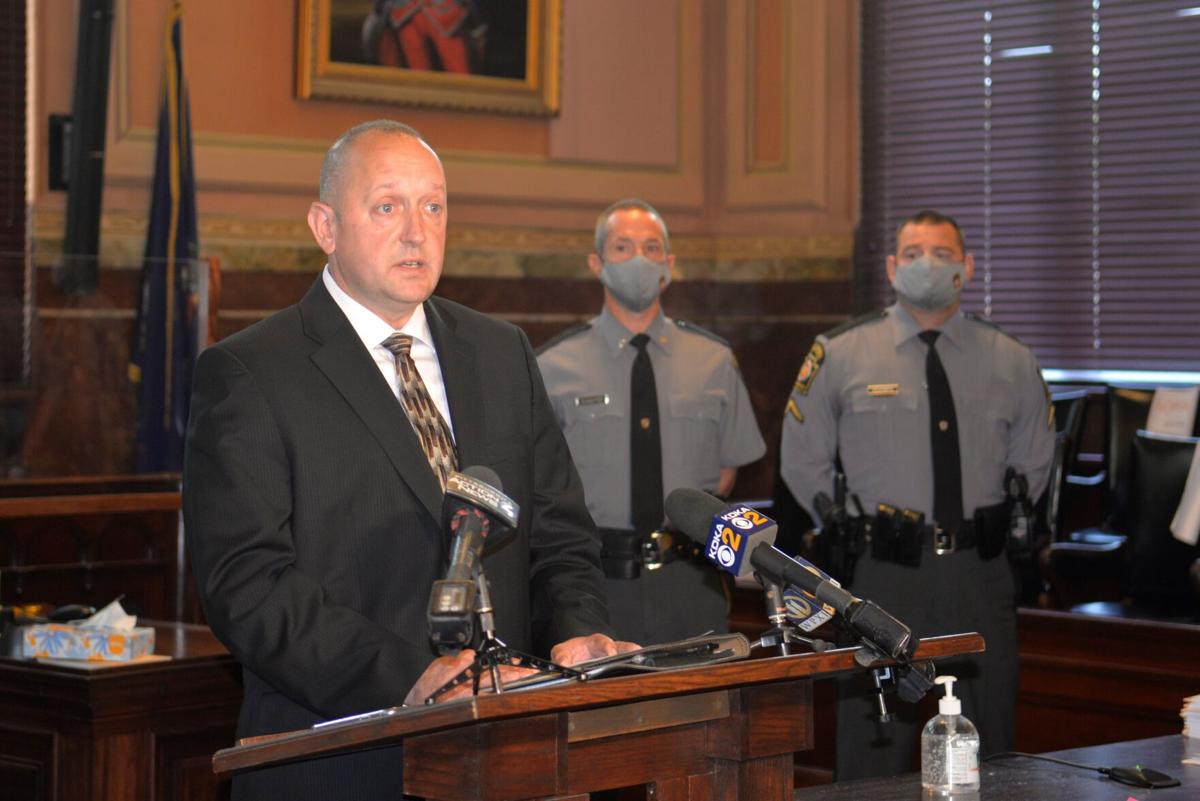 Capt. Leo Hannon, head of the Western Organized Crime Unit of the state police Bureau of Criminal Investigation, discusses the investigations that led to charges filed against county jail and government officials during a press conference Thursday. In background, from left are Lt. Jeff Schaeffer and Tpr. Robert Broadwater. 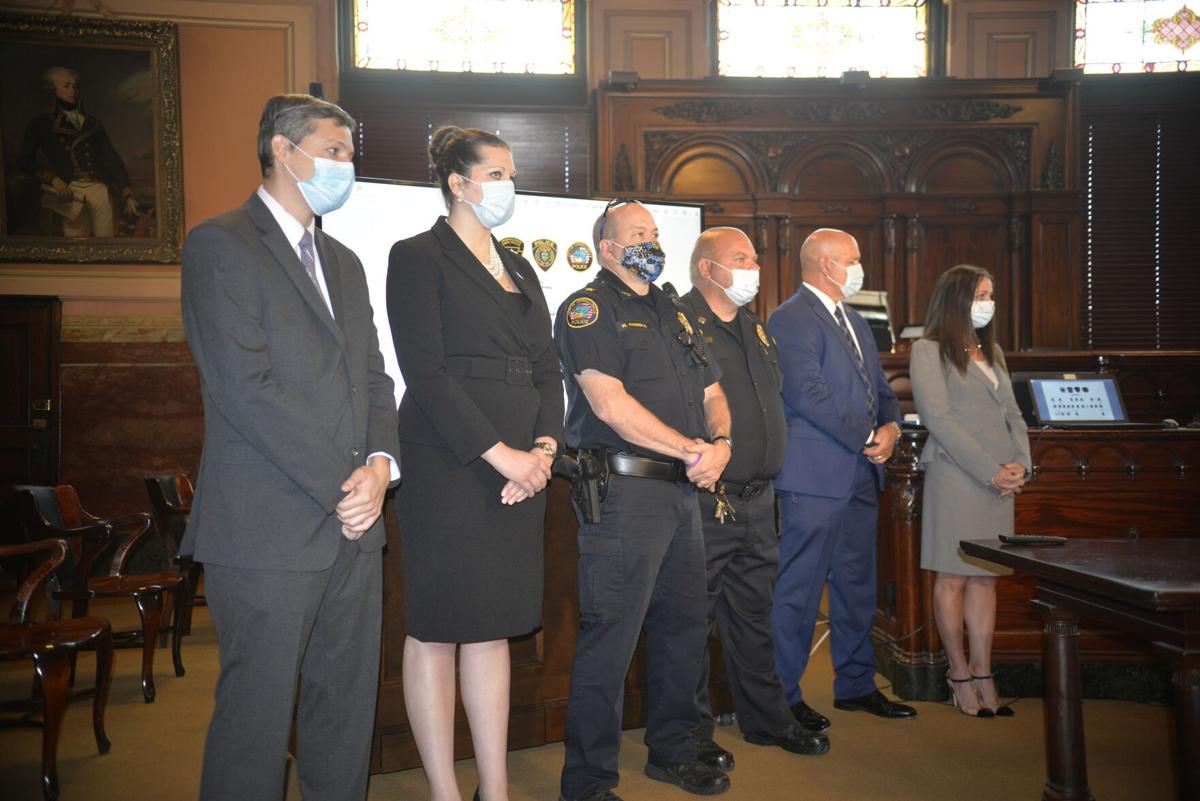 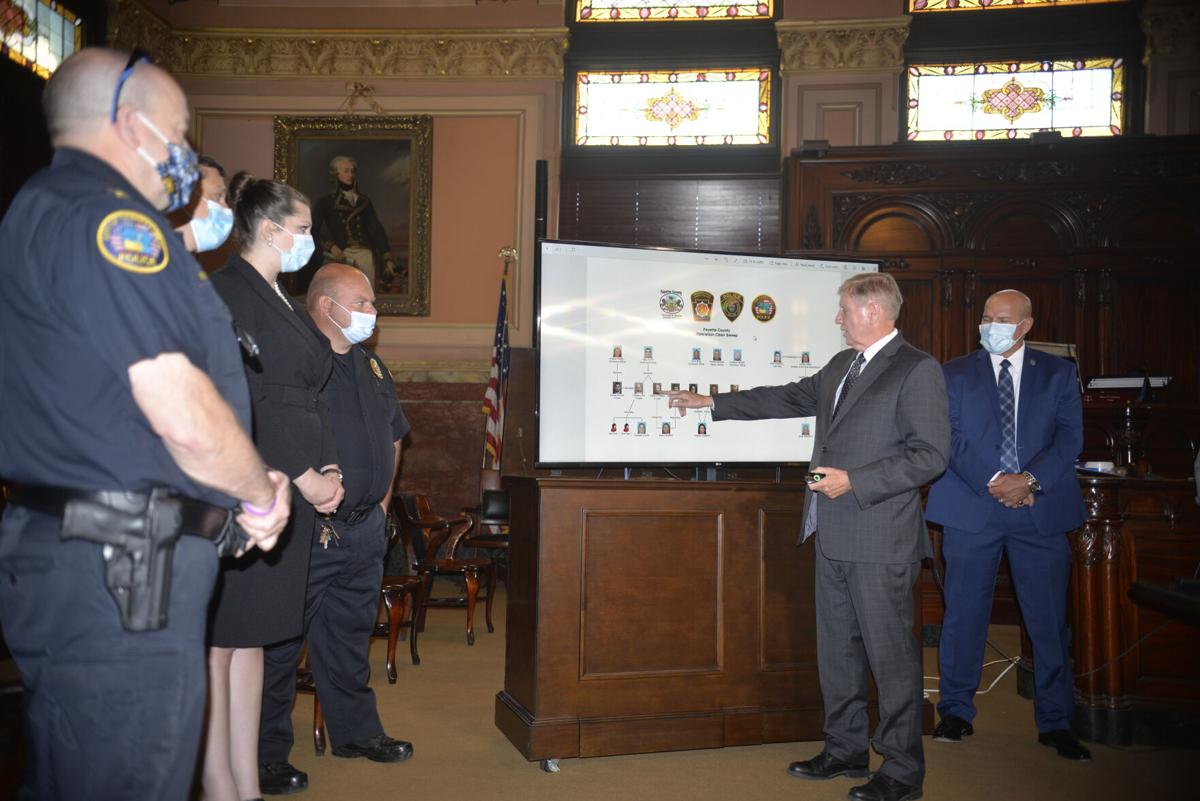 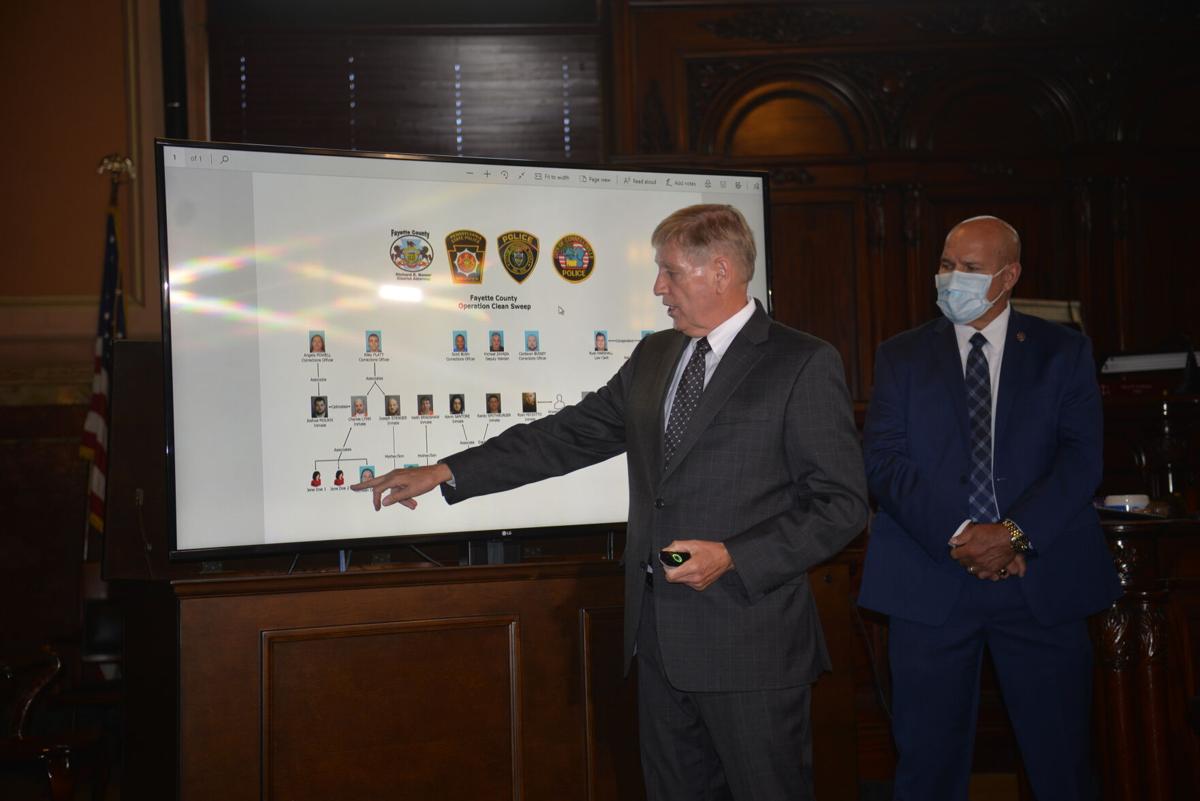 Capt. Leo Hannon, head of the Western Organized Crime Unit of the state police Bureau of Criminal Investigation, discusses the investigations that led to charges filed against county jail and government officials during a press conference Thursday. In background, from left are Lt. Jeff Schaeffer and Tpr. Robert Broadwater.

Fayette County government and county prison officials were among 30 indicted by a grand jury after the discovery of alleged corruption and a drug ring, county District Attorney Rich Bower announced Thursday.

The seven-month investigation, dubbed “Operation Clean Sweep,” was conducted by the Fayette County district attorney’s office, the state police Bureau of Criminal Investigation, Uniontown City Police and Connellsville Police, with the support and assistance of other law enforcement and government organizations, including the Fayette County Commissioners.

Many of the charges are related to contraband in the Fayette County Prison and drug dealing inside and outside of the prison.

“When we started this, we had no idea how deep the corruption was that we were going to find,” Bower said at a Thursday morning press conference.

Capt. Leo Hannon, head of the Western Organized Crime Unit of the state police Bureau of Criminal Investigation, lauded those involved with the investigation, and the officials who reported alleged corruption to law enforcement.

“You just heard announced by Attorney Bower allegations of significant egregious misconduct perpetrated by individuals, some of whom held positions of significant power over others. You heard of acts of corruption – corruption that can corrode away trust in our public officials, corruption that can cause good people to feel cynicism toward a system put in place to protect and, indeed, to serve our society,” Hannon said. “But you also heard of relentless pursuit by representatives of that same system – attorneys, detectives, police officers and troopers – whose insatiable thirst for justice drove them to honestly, objectively and tirelessly wade through mountains of potential evidence, and through good police work, present that evidence to a patient and equally honest and diligent grand jury.”

“We never knew the depth to which the drug activity was going on in the prison, and then we never knew that we had court personnel violating the trust of individuals that they worked with, but this is a deep-seated problem, and, very bluntly, corruption has gone on here, has gone unchecked for many years,” Bower said.

Tammy Cable, 50, of Uniontown, former assistant to the court administrator, was charged for allegedly abusing her power and Ryan Joseph Marshall, 29, a former law clerk, was also charged along with Cable’s parents and uncles.

Cable allegedly filed a motion for guardianship of her grandfather Elmer Kisner Jr. March 5, which was signed the following day. The Register of Wills later found a missing page in the motion, and the case was brought to prosecutors. Bower said Cable and Marshall discussed the motion before it was signed by a judge.

Kisner, who died March 7, and his wife of 38 years, Doris Kisner, were taken the hospital in February, police said. When their daughter, Toni Finnell, came to assist her mother in March, she found $86,000 missing from their bank account, police said. Various other items, including a car, were also missing.

Investigators alleged Sherry Lee Walters, 71, and her husband, Ernest Andrew Walters, 65, of Uniontown forged checks and a vehicle title for the car. Elmer Lewis Kisner III, 70, was also charged in the case.

Bower said Doris Kisner was not permitted to see her husband after she was released from the hospital, and did not know he had died. She learned of her husband’s death from her hair dresser, Bower said.

“To this day, she does not know where her husband is buried,” Bower said.

Platt allegedly smuggled drugs into the county prison at the beginning of his shift April 12, according to the charges. Police said he admitted to bringing drugs into the prison multiple times, including suboxone, Xanax and synthetic marijuana. He said he would meet women at Walmart and give the contraband to inmate Charles Edward Lynn, 41, of Uniontown, who would pay him. Kathleen Joy Dixon, 52, of Madera allegedly admitted to authorities she sent and received payments for Lynn. Lynn reportedly told investigators he made about $4,000 for every $1,000 he paid Platt.

Platt, Lynn and Dixon are facing charges including corrupt organizations, possession with intent to deliver, contraband and bribery.

Platt was also charged in a separate case for allegedly smuggling tobacco, rolling papers and lighters into the prison for inmate Keith Scott Bradshaw, 32, of Everson at least twice. He said he met Bradshaw’s mother, Sherry Lynn Murphy, 61, of Scottdale at a gas station multiple times. Murphy also allegedly discussed smuggling contraband in a phone call with her other son, inmate Joseph Cyril Stenger, 38, of Connellsville, but denied providing him contraband in interviews with investigators.

Murphy, Platt, Stenger and Bradshaw are facing charges including corrupt organizations and bribery.

Powell was allegedly observed passing a book to Lynn, which was found to contain suboxone strips, according to court documents. Lynn allegedly gave the book to his cellmate, Joshua Lee Mulnix, 26, of Connellsville. Powell, Lynn and Mulnix are facing charges including possession with intent to deliver, contraband and conspiracy.

In an interview with police, Bush admitted they had a disagreement over his vehicle, but claimed their interaction at the garage was peaceful. He faces charges including aggravated assault, official oppression and terroristic threats.

On May 15, a county prison official notified Uniontown City Police of a phone call between inmate Randy Allen Smithburger Jr., 29, of New Salem and a woman, later identified as his girlfriend, Heather Nicole Cornish, 35, of Uniontown. Smithburger reportedly discussed picking up drugs from Cornish during an escort just outside the prison. Police and the Bureau of Criminal Investigation later observed Cornish with her 2-year-old son drop off items, later identified as suboxone and tobacco, which Smithburger allegedly picked up and swallowed, court documents said.

On May 11, Cornish allegedly dropped off an item with her son, which was picked up by inmate Kevin Louis Santore, 33, of Grindstone during an escort. Court documents indicated Smithburger asked Santore to pick up the item, later identified as suboxone.

Cornish, Santore and Smithburger are facing charges including possession with intent to deliver, possession of contraband and conspiracy. Cornish is also charged with endangering the welfare of children.

Marshall was charged in a separate case for allegedly recording court proceedings while working as a law clerk for Judge Steve P. Leskinen, who confirmed Marshall was not given permission to record proceedings. Eight recordings were found on Marshall’s phone, court documents said.

Fayette County Prison inmate Ryan Miciotto, 28 of Allison is facing charges including possession with intent to deliver, contraband and conspiracy after he allegedly handed over an item, later identified as 0.017 grams of methamphetamines, to another inmate at the prison March 10.

Bussey was charged with official oppression and tampering with public records by county Detective John Marshall for allegedly failing to intervene while two inmates assaulted a third inmate May 11, and providing information that did not match video, according to his charges. The victim was taken to Uniontown Hospital for treatment, and lost multiple teeth in the assault.