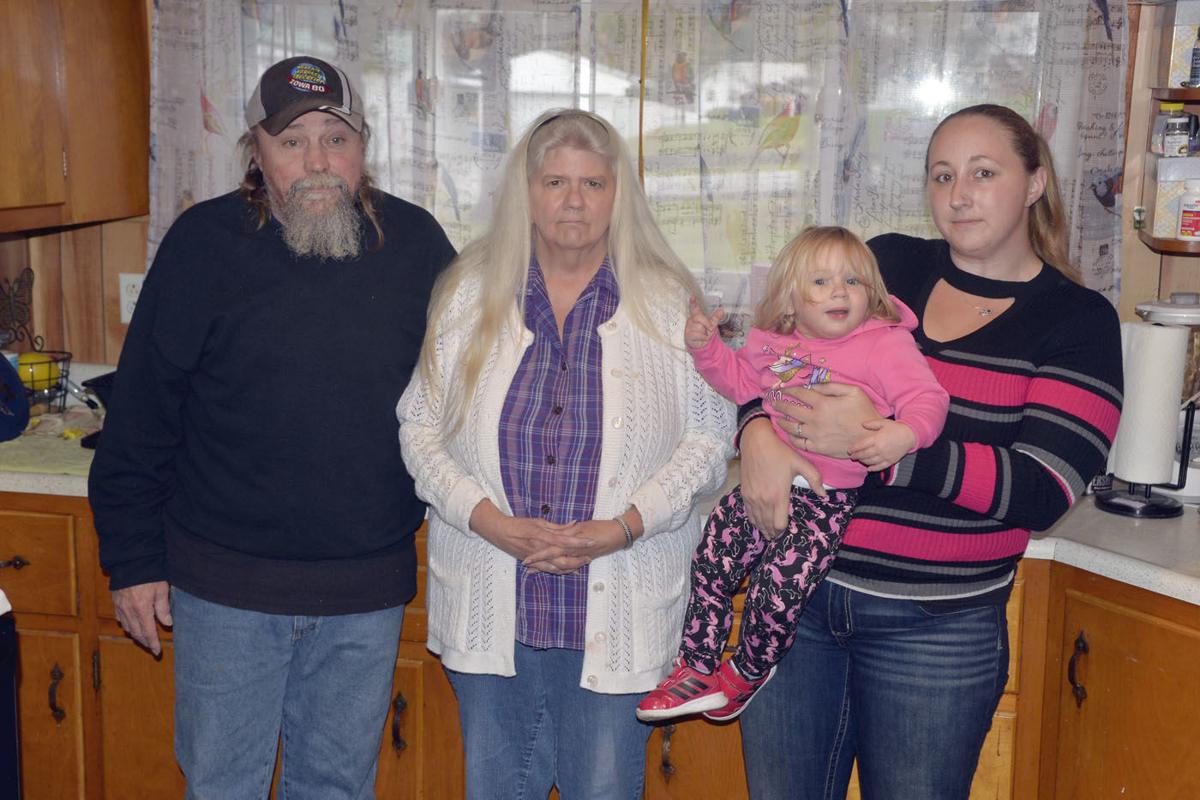 John Tomasek, his wife Deborah, granddaughter Natalie Louise and daughter Amanda are pictured in the kitchen at John and Deborah’s Mount Braddock home. John’s 86-year-old mother Phoebe has been incarcerated at SCI-Muncy for the past 37 years, and John said that the cost of sick call visits has been burdensome for his mother - and him. 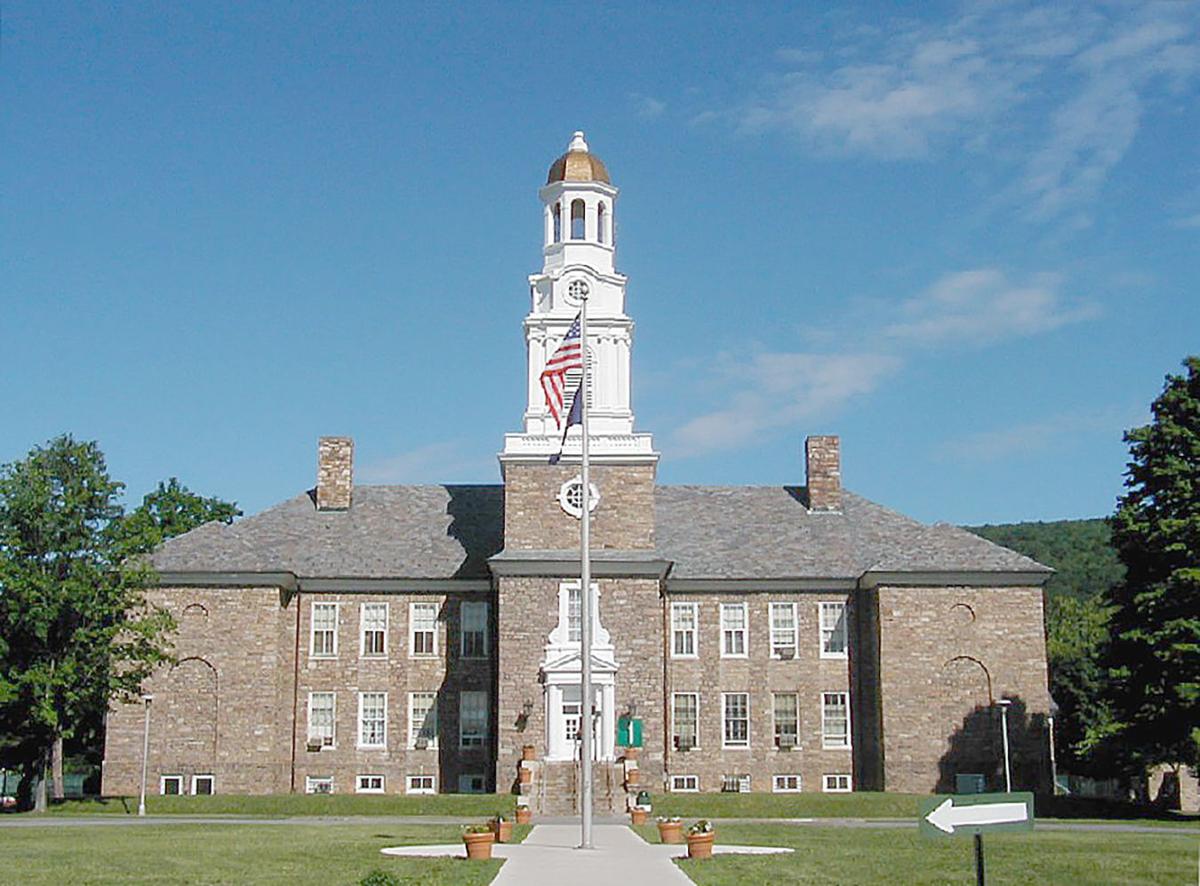 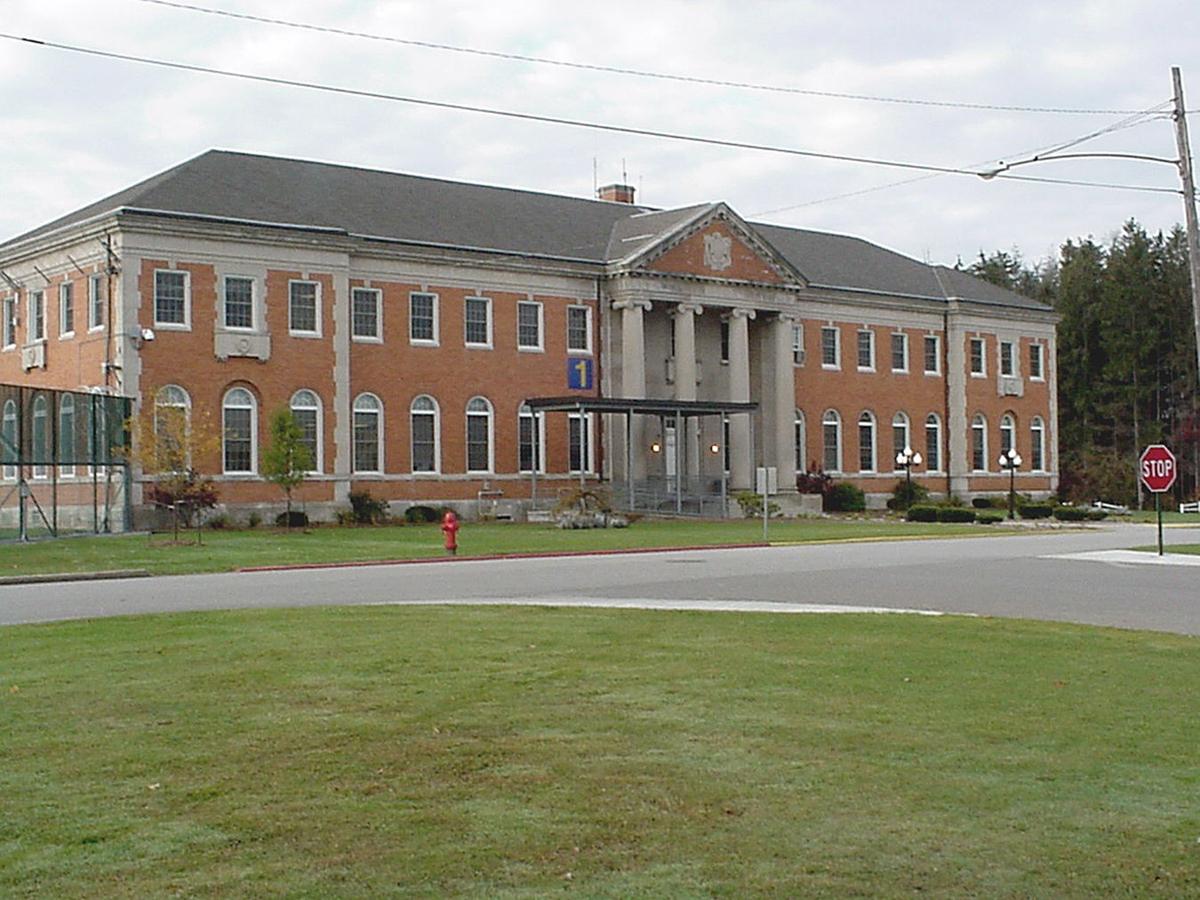 The State Correctional Institution at Cambridge Springs in Crawford County 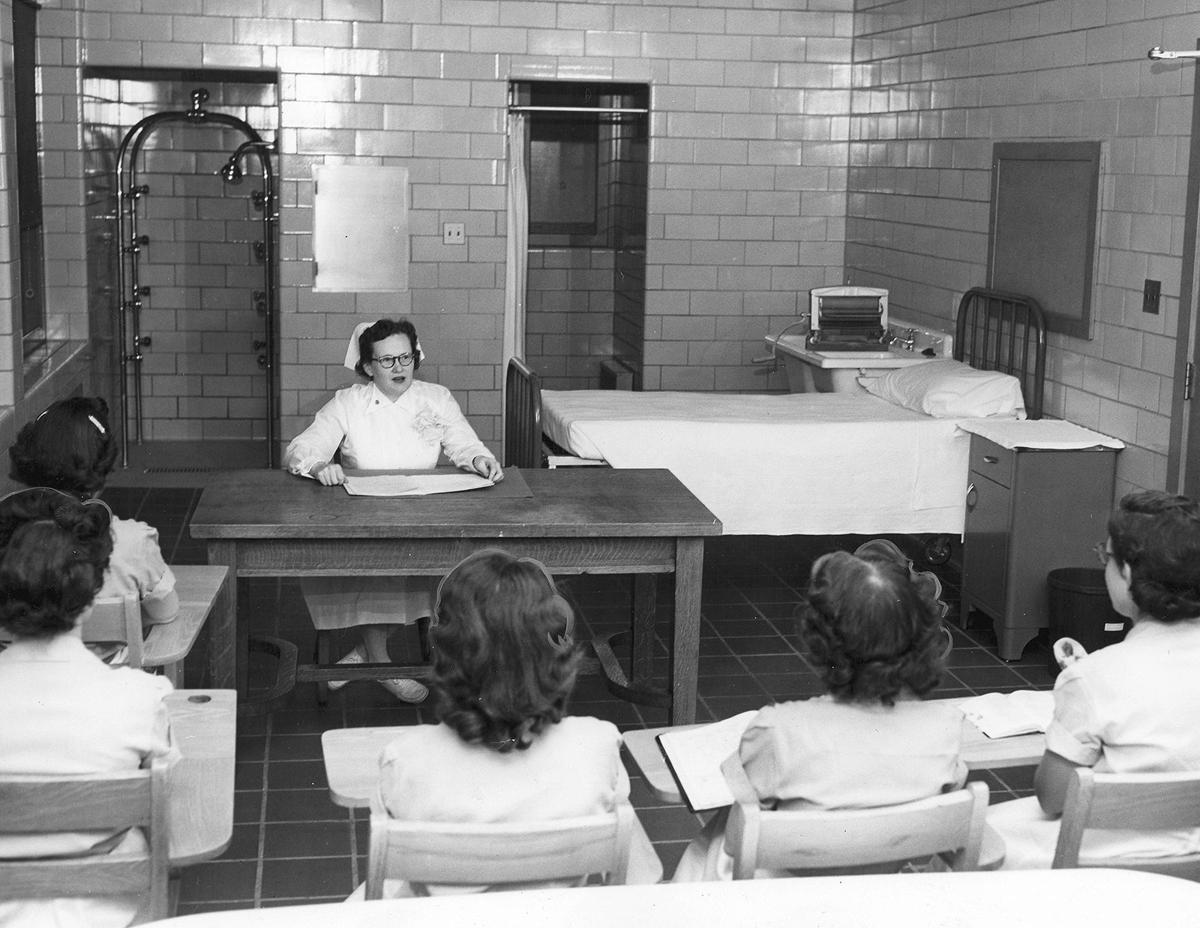 A nursing class is taught at the State Correctional Institution at Muncy in Lycoming County in this 1954 photo. Women incarcerated there 65 years later say adequate health care at the facility is lacking.

John Tomasek, his wife Deborah, granddaughter Natalie Louise and daughter Amanda are pictured in the kitchen at John and Deborah’s Mount Braddock home. John’s 86-year-old mother Phoebe has been incarcerated at SCI-Muncy for the past 37 years, and John said that the cost of sick call visits has been burdensome for his mother - and him.

The State Correctional Institution at Cambridge Springs in Crawford County

A nursing class is taught at the State Correctional Institution at Muncy in Lycoming County in this 1954 photo. Women incarcerated there 65 years later say adequate health care at the facility is lacking.

Imagine having lost not only your freedom but any hope that concerns about your health will be taken seriously when you get them checked out.

Prisoners at State Correctional Institute-Muncy in Lycoming County, one of two women’s state prisons in Pennsylvania, say that’s their reality.

“Inmates … can’t speak up for themselves or don’t, due to being sorely disillusioned with the process and previous results,” Terri Harper, who has been incarcerated there since 1993, said in a letter to the Herald-Standard.

Harper was one of nine current and former Muncy prisoners who detailed concerns about medical treatment. The complaints were similar: apathy toward health symptoms, medical attention coming at a prohibitive cost and medical staff turnover disrupting continuity of care.

Naomi Blount Wilson, 69, had her life sentence commuted and was released from Muncy five months ago after being there for 35 years.

Ellen Melchiondo has been to Muncy several dozen times and Cambridge Springs a few times as a visitor with the Pennsylvania Prison Society, which advocates for humane prisons. She said that she’s heard similar complaints.

“It just seems like the symptoms are never really taken seriously,” Melchiondo said.

Harper said that prisoners are “always given the runaround” at sick call, as if they’re all always seeking drugs.

“We’re too often looked at as liars and drama queens,“ Harper, 50, wrote. “We’re given details of this or that nurse’s ailments/medical experiences that mirror our own seemingly in an effort to downplay what we are feeling or explain away why they are taking our $5 (copay) and not doing any further testing or anything.”

The problem, Blount Wilson said, is that inmates who pretend to be sick to get out of work or school obligations “messed it up” for those who actually need help.

“(S)o many of the women cried wolf, and then when somebody really needed medical attention, well, they didn’t get it,” she said.

SICK CALL AT A COST

The DOC defines “sick call” as the process used by inmates who experience non-emergent medical or dental problems to get examined by a physician, physician’s assistant, nurse practitioner or nurse.

Inmates are charged a $5 copay for any non-emergency service they request, including sick call.

“The cost can be a deterrent for women to get health care,” Melchiondo said.

It doesn’t help that hourly pay for DOC inmates starts at 19 cents an hour and is capped at 51 cents an hour. There’s a medical allowance of 50 cents per day, five days per week for inmates who are unable to hold jobs or do school assignments for medical reasons.

“We are constantly reviewing and researching ways to improve our processes in this area (sick call) and all areas of the institution,” SCI-Muncy Public Information Officer Troy Edwards said.

“When she goes to the doctor, she doesn’t have enough money on her books,” Tomasek said. “As soon as the money comes in, they’ll take it out.”

Inmates who did go to sick call several times could then go to a psych doctor and get any kind of medications that they wanted, Blount Wilson observed.

“(Y)ou can say something is wrong with you, my back hurts, my neck hurts, my feet hurts, anything hurts, and they’ll give you the psychotropic meds,” said Blount Wilson.

The increase in percentage of all state inmates on psychotropic medication soared from 16.73% in 2003 to 68.4% in 2018. Muncy and Cambridge Springs have been among the five state correctional facilities with the highest rates of psychotropic patients in all but one of the past 15 years.

Edwards and Cambridge Springs Public Information Officer Amy Boylan said all inmates receive a mental health evaluation when they first arrive, and are followed as needed during their imprisonment.

Several inmates at Muncy said frequent turnover in the prison’s medical directors in recent years has also been a challenge.

“A lot of us fell through the cracks and received no continuity of care,” Harper said.

“There’s an incredible turnover rate in staff at the medical department at Muncy,” Melchiondo said. “The lack of continuity of care might be an issue.”

Cambridge Springs has had significant medical staff turnover over the past three years, Boylan said.

“Up toward 15 people,” she said, adding the main reasons are staff moving away, new employees deciding that corrections work isn’t for them and personal conflict with the shift work schedule.

Edwards said the reasons for turnover at Muncy are similar, but that doesn’t mean health care needs are ignored.

“All shifts are properly covered and systems in place to address all healthcare needs of those we serve,” he said.

“The current physical plant dates to the 1960s and since then the increase in the female population and in the aging, long-term inmate population, along with stricter medical standards have all stretched the capacity and capabilities of the medical department,” Wetzel said.

Edwards and Boylan said each of the women’s prisons has one patient with active cancer and eight patients who are under surveillance for prior cancer. Treatment and evaluation of cancer for inmates at both prisons are provided by a local offsite oncologist, they said.

Harper, serving life for second-degree murder in Philadelphia, said she’s afraid to go to medical appointments even for a routine checkup because she’s aware of too many lifers who got diagnosed with stage 4 cancer. Blount Wilson has heard from several juvenile lifers who spent around 40 years in prison and found out they’re too afraid to get a checkup too.

“(I)t just seems to me that when the ladies find out that they’re sick, it takes a toll on them and they die,” Blount Wilson said. “I would rather just live whatever life that I do have in me.”

Blount Wilson said that Muncy has been known to have an asbestos problem that has caused her and other prisoners concern over the years.

“They will never make me believe, oh, they just happened to have cancer,” she said. “No, it is that place. It is Muncy that has made those women sick.”

According to inmate death report data provided by the DOC in response to a Herald-Standard Right-to-Know request, 21 out of 73 inmate deaths at Muncy from 1997 through 2018 were due to cancer, or 28.77%, slightly above the 27.39% clip among all facilities. Cambridge Springs had a higher percentage of deaths due to cancer – 31.4%, or 11 of 35 inmate deaths in that span.

“NOT JUST THE BODY”

John Tomasek and his daughter Amanda know that you go to prison to pay a price. Phoebe Tomasek is serving life for hiring someone to kill her husband.

But they feel like they’re paying a price too. John has already made funeral home arrangements to cremate her mother to save money, and they worry about her, noting that she had a recent bout with throat cancer and had a rash treated successfully by an inmate who got materials from the commissary after multiple sick call visits didn’t help.

“I understand they’re not in the country club,” Tomasek said. “But they still deserve humane treatment.”

Blount Wilson is now a commutations specialist for the Office of Lt. Gov. John Fetterman, helping female and male prisoners prepare for commutation and guiding their families through the process. She thinks Muncy should be shut down and brings up her concerns about medical treatment and conditions there with DOC administrators whenever possible.

She made sure to let administrators know last Friday about Shavonne Robbins dying at 43 earlier this month of what Melchiondo said was a rare abdominal mucus cancer. Robbins was a juvenile lifer who was released from Muncy in 2017 after 25 years.

“There’s no way that I can forget where I came from and leave those women like they are,” Blount Wilson said.

“Health care’s not just the body. It’s the mind and the person,” Melchiondo said. “It’s respecting the person, and I think that’s what’s lacking.”

More women sentenced to prison time in Fayette County find themselves going to a state facility than most all other counties in the state.

You know what else is unfair....being a law-abiding citizen that has worked every day from the age of 14 to 70 including working through chemo treatments and having to still pay thousands in co-pays and while getting sub-par health care. Healthcare is broken most for people who work for it, but those that complain the most, are well, inmates and those that look like the people in this picture. Also this quote: "But they feel like they’re paying a price too. John has already made funeral home arrangements to cremate her mother to save money, and they worry about her, noting that she had a recent bout with throat cancer and had a rash treated successfully by an inmate who got materials from the commissary after multiple sick call visits didn’t help." Please - responsible people plan on funerals. Stop playing the victim.