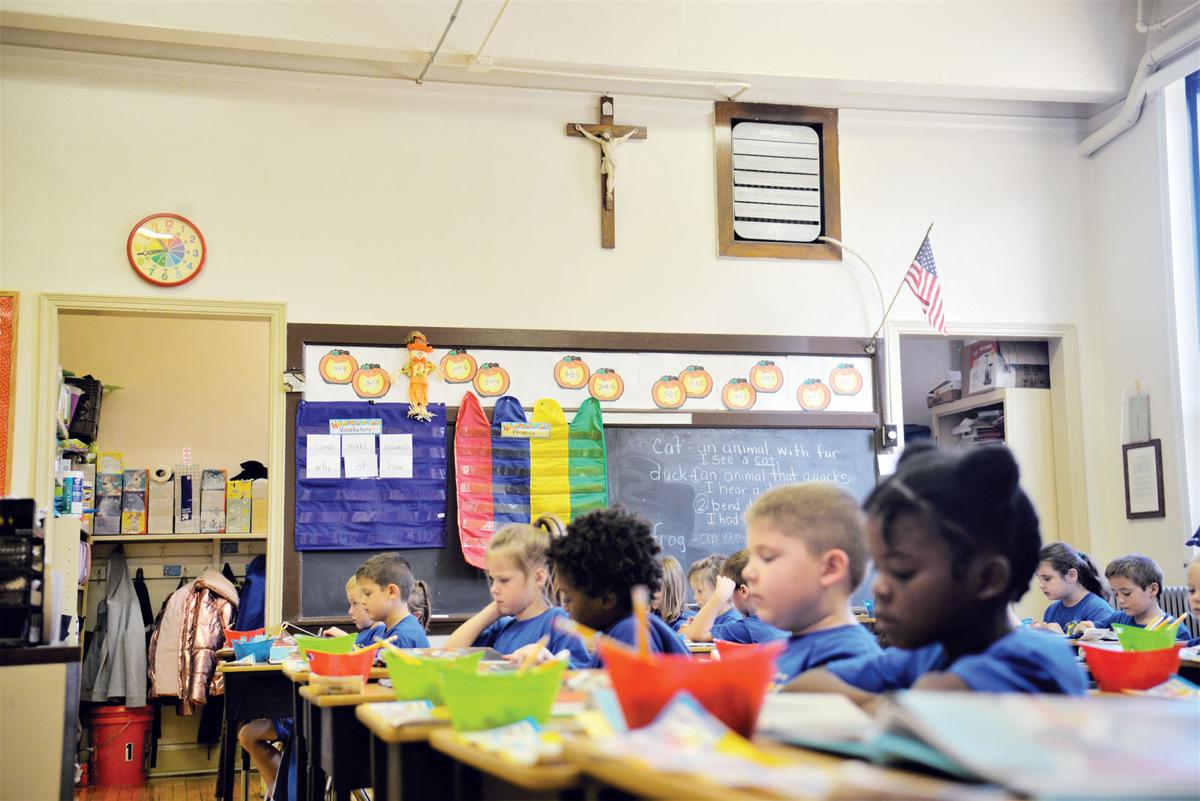 Pictured are students in a first grade classroom at St. John the Evangelist Regional Catholic School in Uniontown, one of 12 schools under the auspices of the Roman Catholic Diocese of Greensburg. 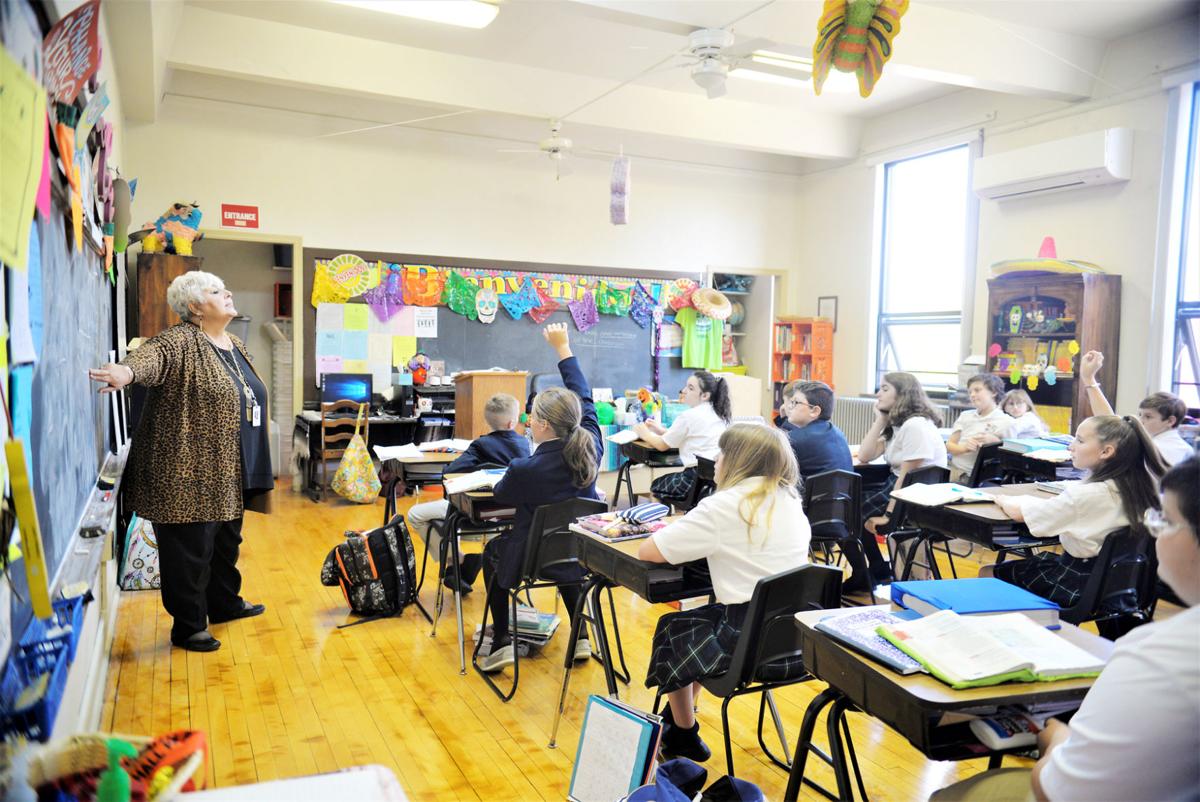 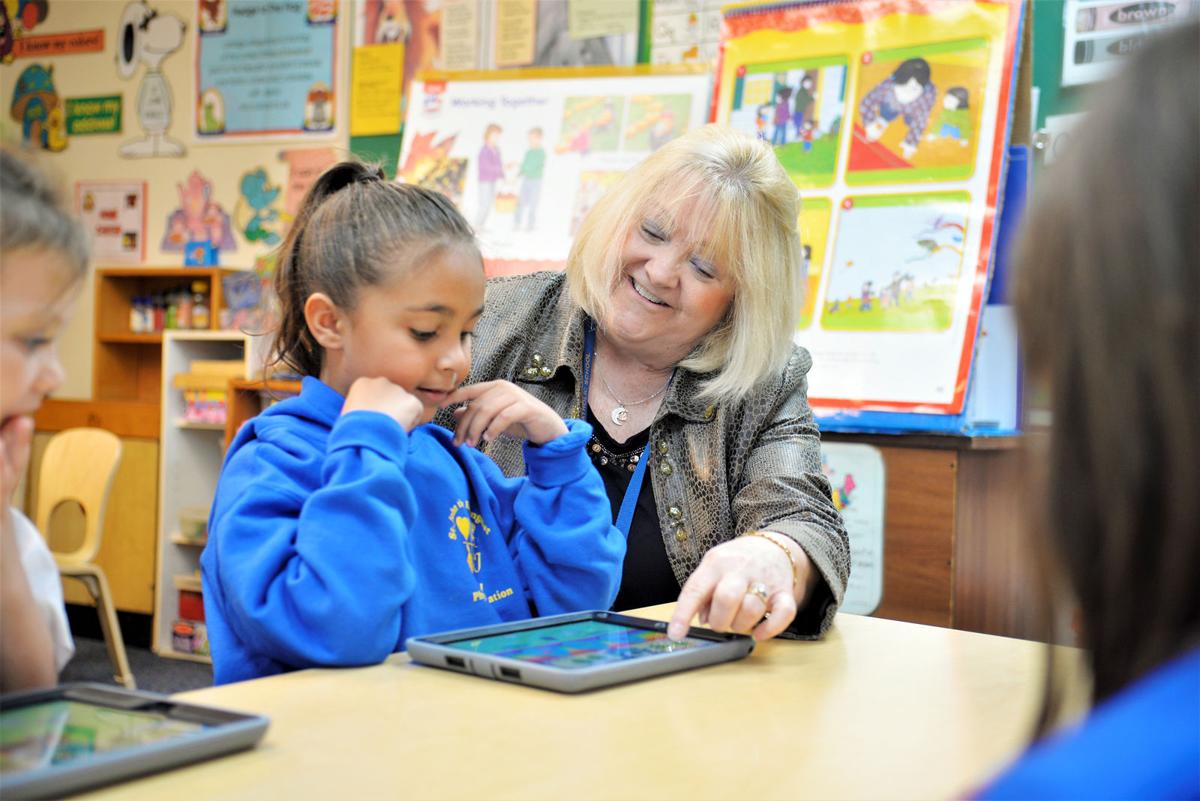 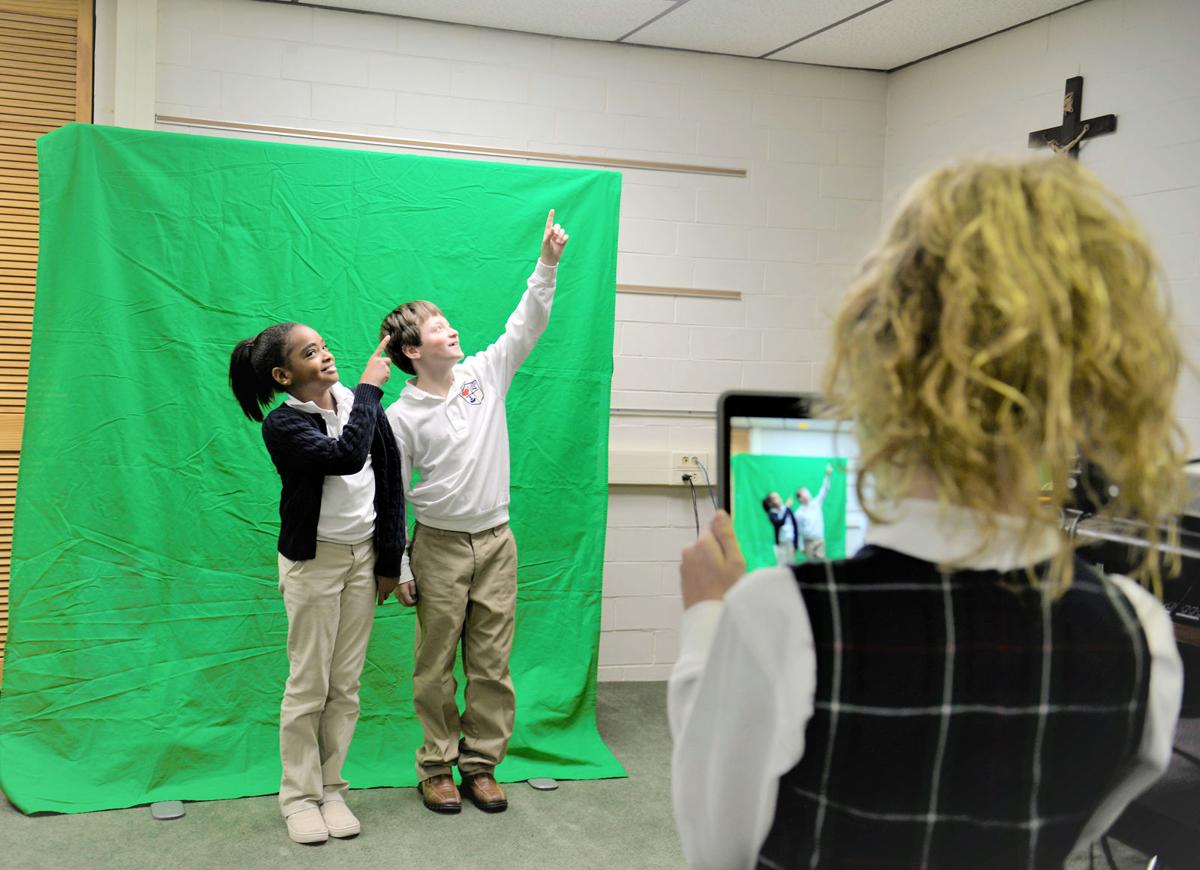 St. John the Evangelist fourth grader Gabriela Frankenfield takes a photo of classmates Aaliyah Mosley and Ambrose Myers-Greene with an iPad to demonstrate the use of the school's green screen technology. 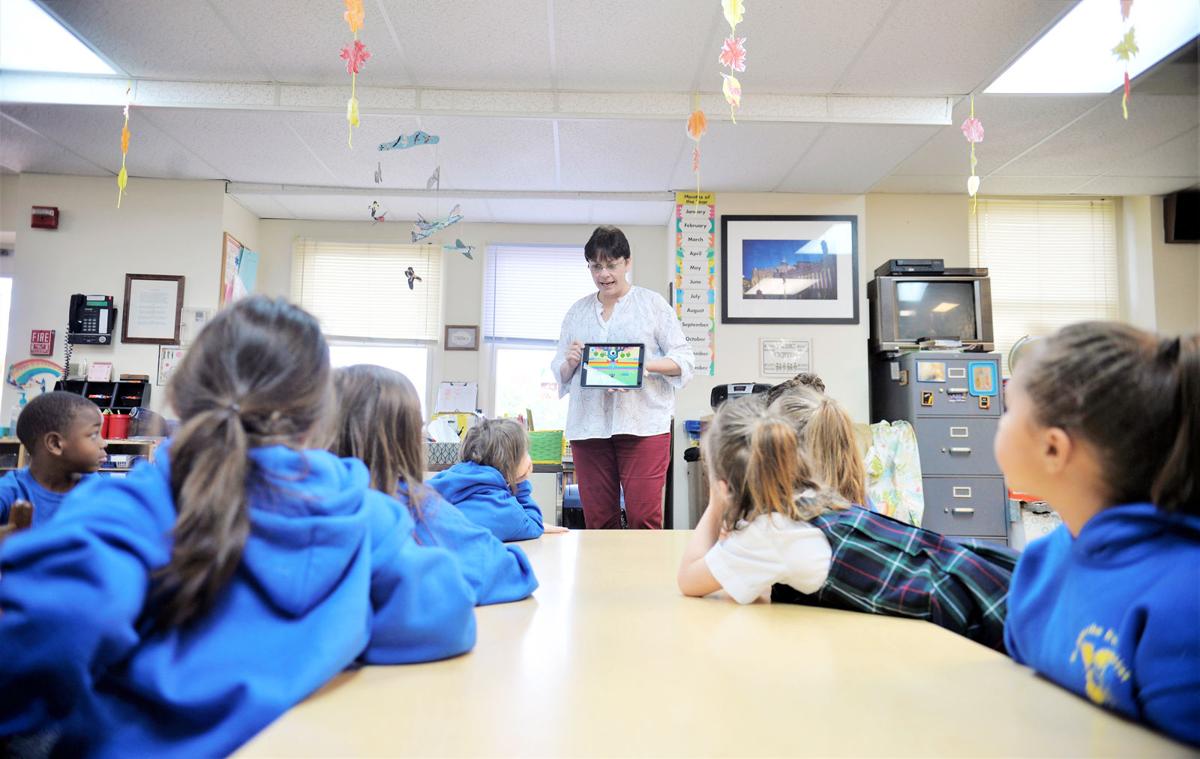 Teacher Amy Palya demonstrates an activity using an iPad to a class of kindergarten students at St. John the Evangelist Regional Catholic School in Uniontown. 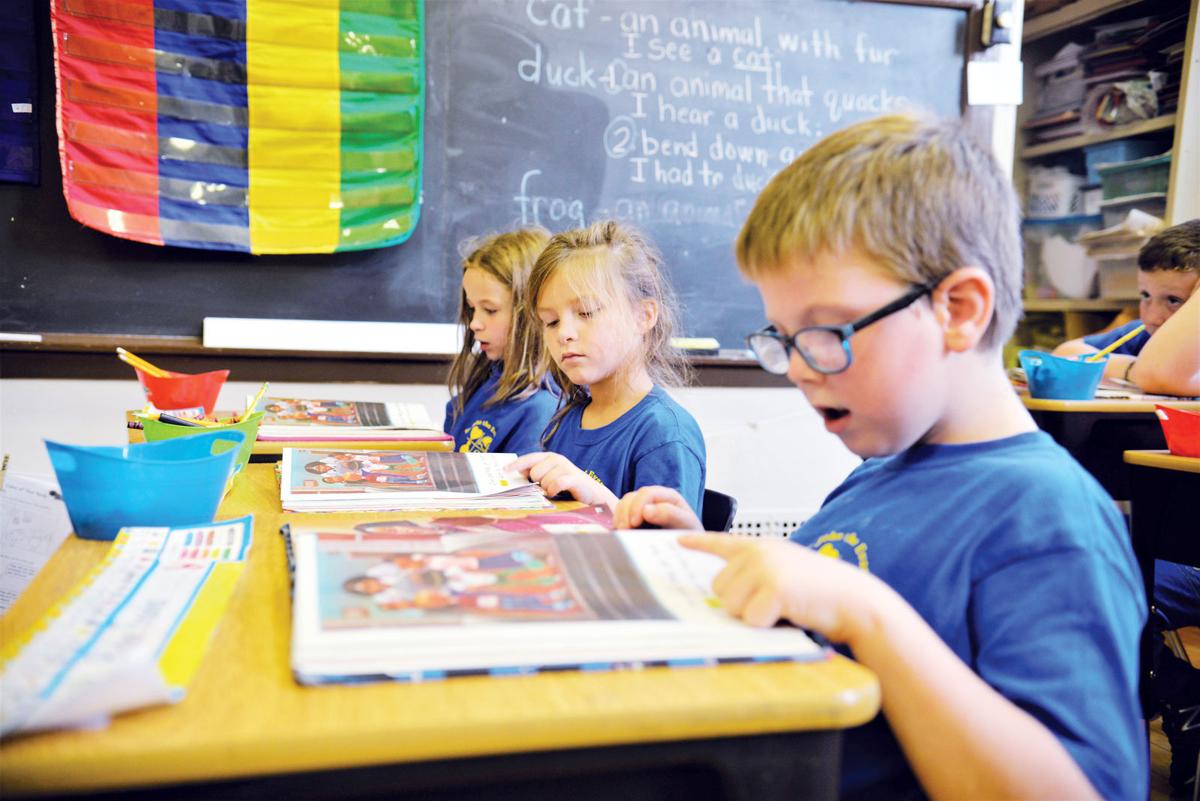 Students in Cathy Poninsky's first grade class at St. John the Evangelist Regional Catholic School follow along in their workbooks during a reading lesson. 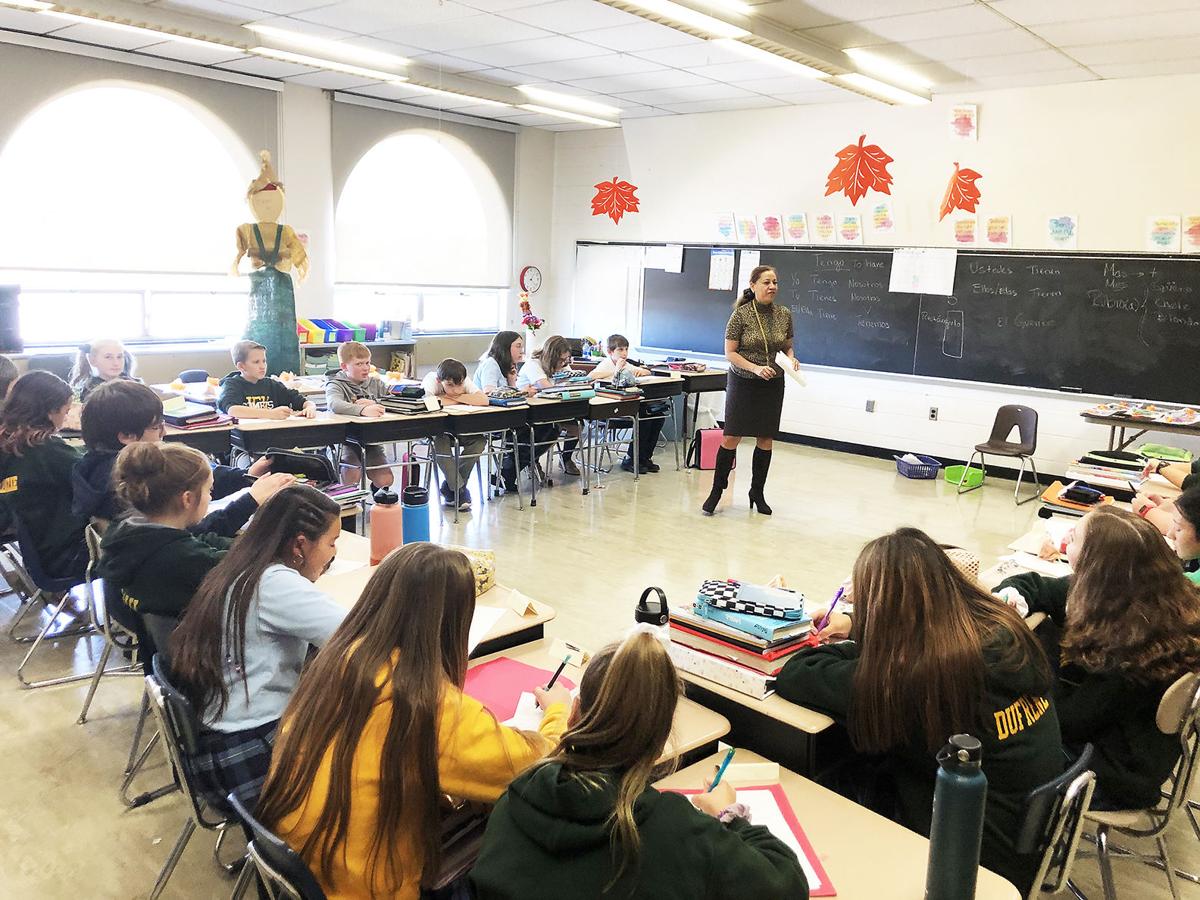 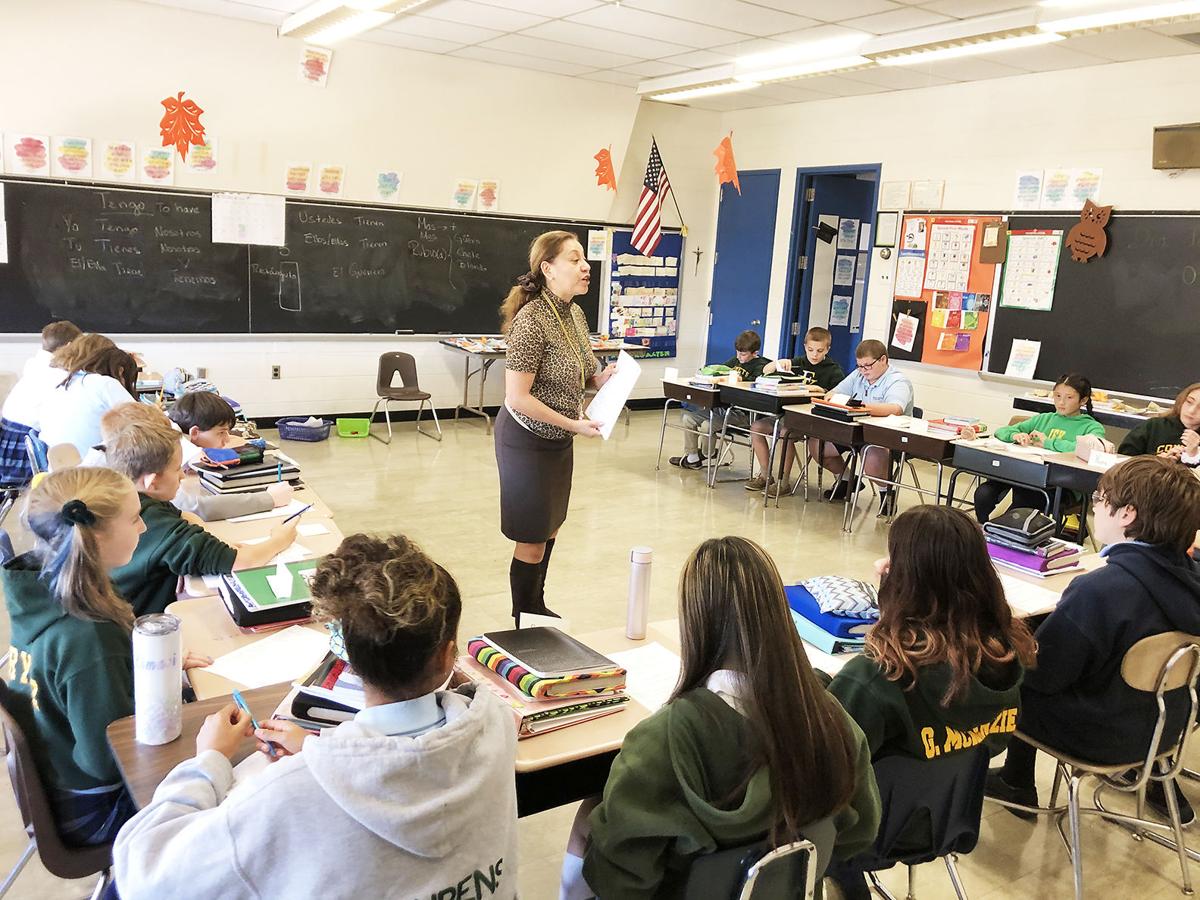 Pictured are students in a first grade classroom at St. John the Evangelist Regional Catholic School in Uniontown, one of 12 schools under the auspices of the Roman Catholic Diocese of Greensburg.

St. John the Evangelist fourth grader Gabriela Frankenfield takes a photo of classmates Aaliyah Mosley and Ambrose Myers-Greene with an iPad to demonstrate the use of the school's green screen technology.

Teacher Amy Palya demonstrates an activity using an iPad to a class of kindergarten students at St. John the Evangelist Regional Catholic School in Uniontown.

Students in Cathy Poninsky's first grade class at St. John the Evangelist Regional Catholic School follow along in their workbooks during a reading lesson.

Editor’s Note: This is the second of a three-part monthly series done as a partnership with the Observer-Reporter newspaper in Washington, Pa.

Five Catholic schools in southwestern Pennsylvania were shuttered in 2019.

The Roman Catholic Diocese of Pittsburgh was responsible for the closure of four of those schools, in addition to the merger of two others, all in Allegheny County, due to enrollment falling too low for the schools to remain viable.

The moves were the latest in a string of changes throughout the diocese over the last three years that has resulted in greatly reducing the number of Catholic elementary schools in the Pittsburgh area. For the Catholic Diocese of Greensburg, the closure of a Westmoreland County elementary school in June, also due to low enrollment, was the organization’s first school closure since 2016.

Dr. Maureen Marsteller, superintendent of the Greensburg Diocese’s Office of Catholic Schools, said the decline can be attributed, in part, to a lesser number of children residing in her diocese’s four-county region of Fayette, Westmoreland, Armstrong and Indiana.

“We have seen a decline over the last five to 10 years, which concerns us,” Marsteller said.

According to figures provided by the Greensburg Diocese, enrollment has fallen 39% over the last 10 years. The diocese has shed nearly 1,375 students over that time.

However, said Marsteller, enrollment throughout the diocese held steady or saw an uptick at 10 of the organization’s 12 schools for the current school year.

“That’s a good start,” said Marsteller. “You hear the Catholic population is declining. We’re addressing that by teaching and preparing the children we do have.”

According to Marsteller, when the diocese examines enrollment, a school is considered “stable” if its student population is within five of the prior year.

Enrollment at a small number of the diocese’s schools was buoyed by the closure The Cardinal Maida Academy in June and the subsequent transfer of approximately half of the shuttered school’s 42 students to nearby schools in the diocese.

The same happened in Pittsburgh with the closure of two schools over the summer, said Anna Torrance, Pittsburgh Diocesan Secretary for Education and Evangelization.

“Almost every student matriculated into another Catholic school,” Torrance said of students affected by school closures in Brentwood, Allegheny County, and in Pittsburgh’s Morningside neighborhood that occurred after enrollments levels at the schools decreased sharply after last school year.

“You might have a number of schools in close proximity to one another but might not have the population to support them. Maybe moving two groups together could make one stronger school,” said Torrance. “You never want to close a school, but you always want to put the kids first.”

According a report from the Pittsburgh Catholic, a weekly newspaper published by the diocese, approximately 24,000 students attended 102 Catholic elementary schools in the 2000-01 school year.

Over nearly two decades since, enrollment has dwindled and the number of schools has greatly reduced. The diocese, according to Torrance, currently serves around 8,000 students in 43 elementary schools, including three local schools: John F. Kennedy Catholic School in Washington, Madonna Catholic Regional School in Monongahela and St. Patrick School in Canonsburg.

Since the inception of its regionalization initiative two years ago, which also included the creation of the Pittsburgh-East Regional Catholic Elementary Schools this year and an impending South Hills grouping next year, the Pittsburgh Diocese has closed or merged 12 additional schools, all in Allegheny County.

Torrance said the consolidations have led to stabilization in enrollment in the regions where restructuring has occurred.

“We were dealing with a trend of declining enrollment, but it has kind of stabilized, and now we’re looking to move towards growing enrollment in those areas,” she said. “It’s not easy.”

According to the National Catholic Education Association (NCEA), Catholic school enrollment reached its peak in the early 1960s when approximately 5.2 million students attended nearly 13,000 Catholic schools across the nation.

The NCEA, which publishes an annual report of national Catholic school data, reported an enrollment of 1.79 million students in 6,289 elementary and secondary Catholic schools nationwide in 2018-19.

The association reports that nationwide student enrollment has fallen 403,168, or 18%, over the last 10 years.

At one time, as many as 14 Catholic occupied Fayette County communities including Brownsville, Connellsville, Everson, Leckrone, Masontown, New Salem, Perryopolis, Republic and Uniontown.

The Herald-Standard reported in 2013 that the Greensburg Diocese’s enrollment five decades prior was 18,686, more than eight times its current student body.

Marsteller, the Greensburg superintendent, said at an August event at Geibel Catholic held to announce initiatives intended to increase enrollment at the Connellsville high school that the school, which offers grades 7-12, hovered around 130 students as it entered the 2019-20 school year.

The number is a considerable decrease from a decade ago, when Geibel enrolled 193 students, according to the state Department of Education, which collects enrollment data annually from private and non-public schools across the state.

Diocesan officials are aware of the area’s demographics and point to the occurrence of declining enrollment in Fayette County’s public schools, as well.

The population of Fayette County fell 8.1% between 2000 and 2010, and 1.3% in Westmoreland County, according to the U.S. Census Bureau, with additional losses estimated through 2018.

The number of Catholics has dropped 23% in the Greensburg Diocese over the last 40 years.

“That’s the reality in a lot of areas,” said Jerry Zufelt, spokesman for the diocese. “We’re looking forward and trying to look towards growth and development.”

Facing decades of declining enrollment, the Roman Catholic Dioceses of Greensburg and Pittsburgh find themselves trying to stem the tide to ensure thousands of remaining students receive a quality Catholic education.

Do you agree with President Biden's decision to withdraw U.S. troops from Afghanistan by Sept. 11?