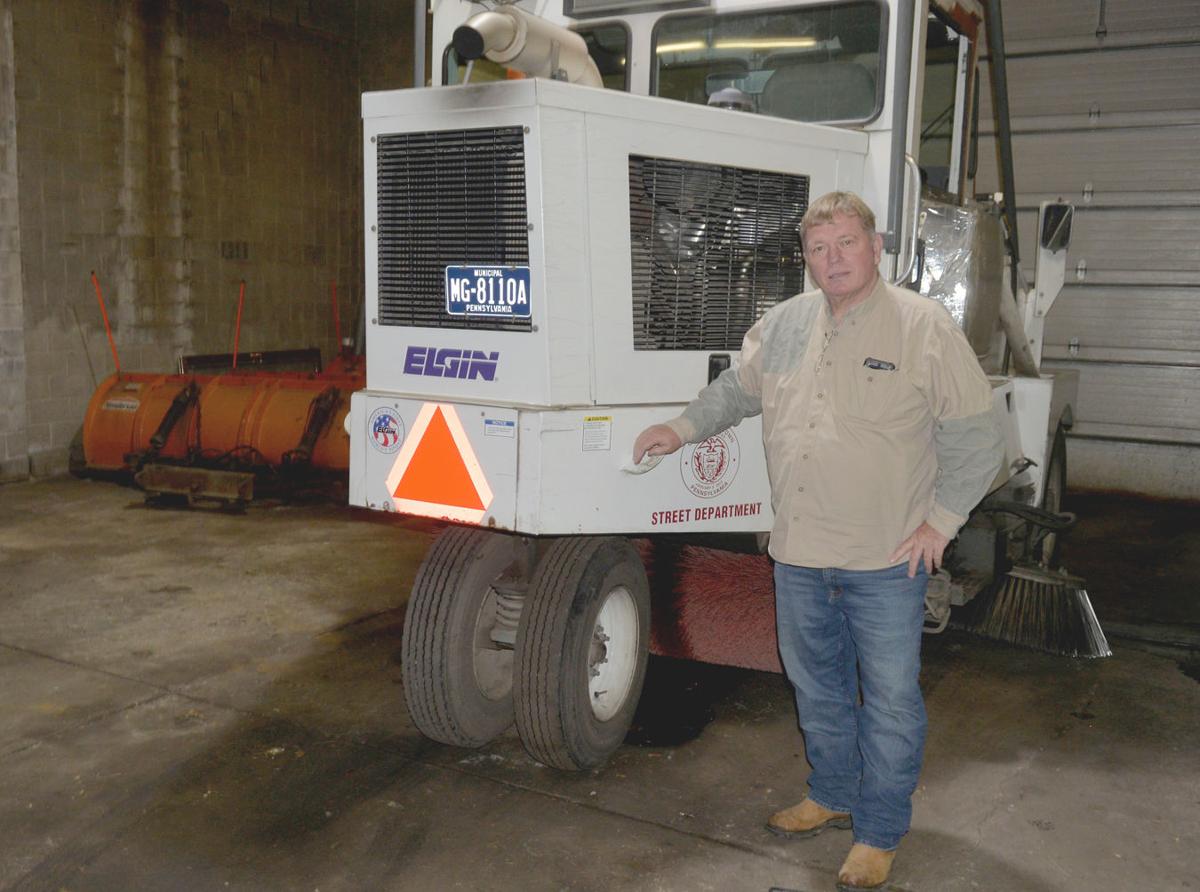 Retired Uniontown city public works director Phil Mahoney stands next to one of the city’s street sweepers. “They start (at) 4:00 in the morning,” Mahoney said. “(There’s) no traffic on road when they run that street sweeper.” 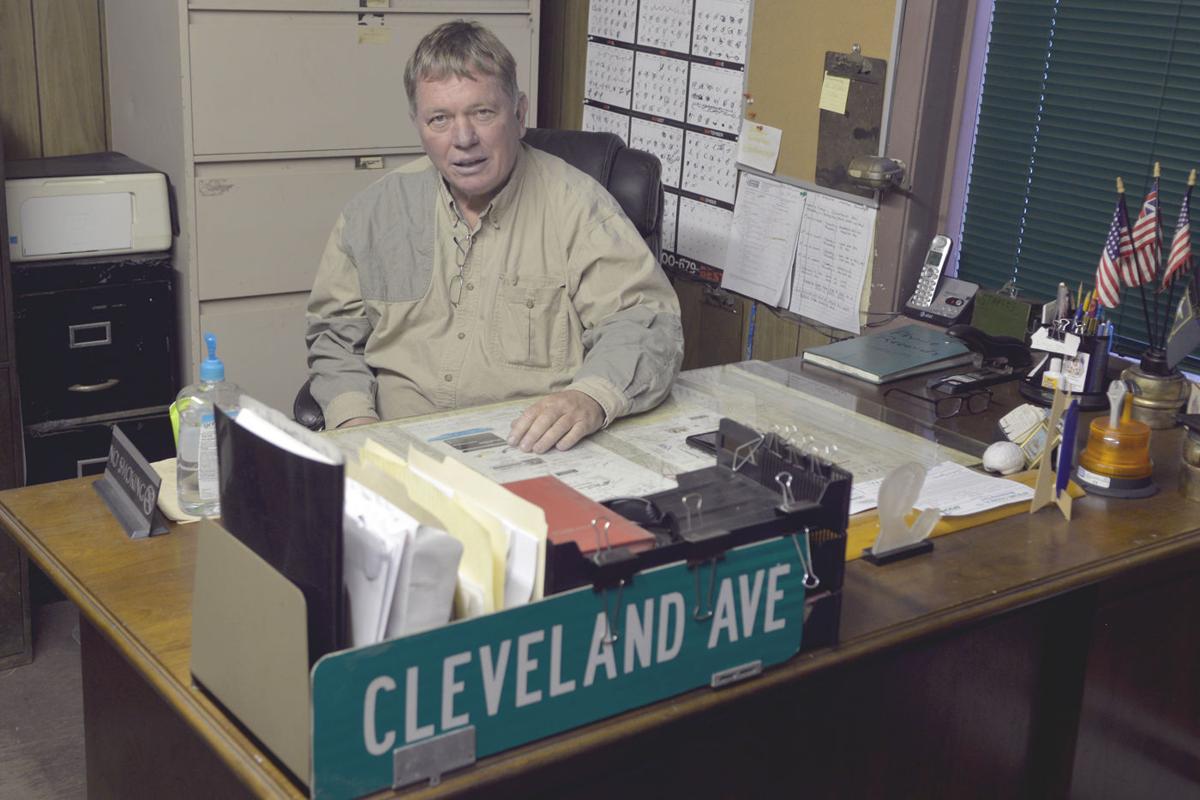 Phil Mahoney is pictured at his desk during his final week as Uniontown’s public works director before his retirement last week, capping three decades of service as a city employee. 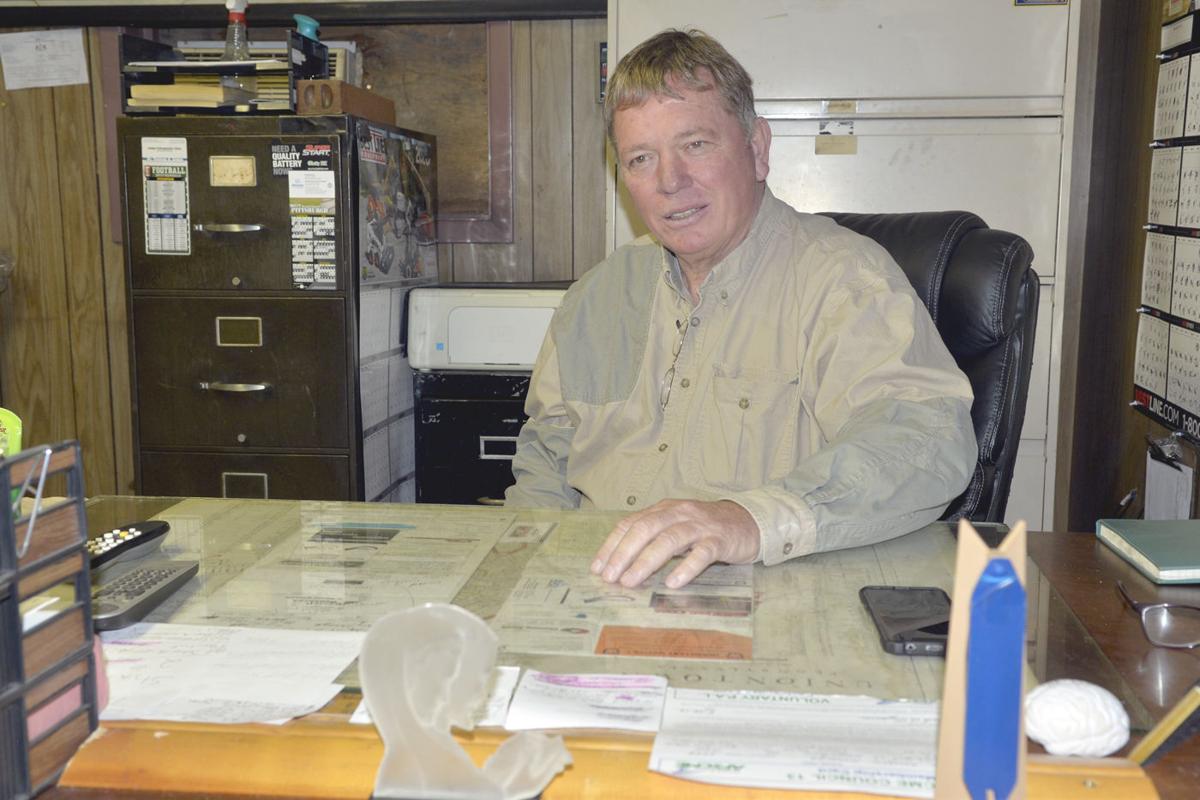 “There’s nothing better than to help someone,” said Phil Mahoney, who retired last week as Uniontown’s public works director.

Retired Uniontown city public works director Phil Mahoney stands next to one of the city’s street sweepers. “They start (at) 4:00 in the morning,” Mahoney said. “(There’s) no traffic on road when they run that street sweeper.”

Phil Mahoney is pictured at his desk during his final week as Uniontown’s public works director before his retirement last week, capping three decades of service as a city employee.

“There’s nothing better than to help someone,” said Phil Mahoney, who retired last week as Uniontown’s public works director.

Phil Mahoney led the kind of work for the city of Uniontown that easily went unnoticed.

Until you desperately needed him.

“When the floods come, my phone rings,” Mahoney said.

Mahoney hopes his phone won’t be ringing as much now. His retirement took effect Friday, ending his 31 years of service as a city employee, including over a decade as public works director overseeing the city’s sewage and street departments.

Wherever there was a basement full of water, a snowstorm wreaking havoc on roads or sewage pipes needing fixed, that’s where Mahoney came in.

Public service in Uniontown has been a family tradition. Mahoney’s father James was the city’s police chief from 1958 to 1973 and served on the police force for more than three decades, and his younger brother is former state Rep. Tim Mahoney, D-South Union Township, who served the 51st Legislative District, including the city, from 2007 to 2017.

Mahoney, 65, of Gibbon Glade, smiled as he remembered one resident who Mahoney was doing sewer line work for saying that Mahoney’s dad had took him to the hospital when he got hit by a car on a bicycle.

“I said he owes us big,” Mahoney laughed. “But it’s that kind of thing that I like doing. When you talk to people and you’re able to help them and you can tell in their voice that they’re appreciative, you really like that.”

Mahoney himself appreciates that his department has never had a fatality in his 31 years with the city or hit a person despite work in deep ditches and a combination of narrow streets and big trucks. Mahoney saw fatalities happen while he was in the coal mine industry with Republic Steel, for whom he was a miner, crew leader and mechanic for 15 years before he worked for the city.

Mahoney is proud of the city complying with a consent order issued by the Department of Environmental Protection in the early 2000s requiring the city to separate its stormwater and sewage systems.

The city’s public works employees have made Mahoney proud too.

“We’re blessed with a good workforce,” Mahoney said. “What’s left of it.”

Uniontown doesn’t have the public works manpower it used to have, a reality that matches the city’s dwindling tax base, wedged between North Union and South Union townships.

“(T)he city’s the hole in the doughnut,” Mahoney said. “We’re not growing.”

Mahoney has consistently lobbied city council in meetings over the years for department upgrades, from new equipment to new trucks, warning council about the department’s aging demographic as well.

Council has been supportive of Mahoney and in November approved applying for a $325,270 Pennsylvania Small Water and Sewer Program grant, authorized advertising for bid a sewer trunk line replacement project and giving Mahoney permission to seek quotes for purchasing two pickup trucks and a bucket truck.

“(But) there’s only so much money in the pot,” Mahoney said.

Like most local municipalities, Uniontown has a tight budget, and that has had implications for what Mahoney and his workers could do.

Mahoney noted that he has a great working relationship with officials in North Union and South Union but has asked council to increase what it charges them for maintenance of city-owned interceptors serving the townships.

The Fayette County Court of Common Pleas ruled in October that the North Union Township Municipal Services Authority was still required to pay an annual fee of $5,000 to the city for service provided by the Cove Run Interceptor, which transfers sewage from township dwelling units to the city sewage treatment plant. North Union Township Municipal Services Authority had argued that the interceptor belonged to the authority and that it did not have to pay any annual fee.

Making Mahoney’s job tougher in recent years was a conspicuous increase in devastating rainstorms flooding homes and businesses. Mahoney would have said that climate change was nonsense four or five years ago. Now?

“I really think there’s something going on,” Mahoney said.

Now at least if the hundred-year floods keep coming, Mahoney won’t have to be in charge anymore. He has a wife to look after and seven grandchildren ages 7 to 19 to enjoy as they get older instead of four plow trucks and two street sweepers.

“Whenever you look into someone’s face and you see six foot of water in their house, it takes a toll on you,” Mahoney said.

Still, Mahoney has told city officials that he’ll be around to give guidance as needed, adding that his successor, John Podolinski, is a “good guy” who is capable of leading a department that faces many challenges.

“It’s been a fun ride, but I tell you, I need to get off the horse,” Mahoney said.

Sometimes there’s so much floodwater that no one has any answers, Mahoney said. He knows that in those moments, during 4 a.m. street sweeping and at all hours of the day, the work continues anyway.