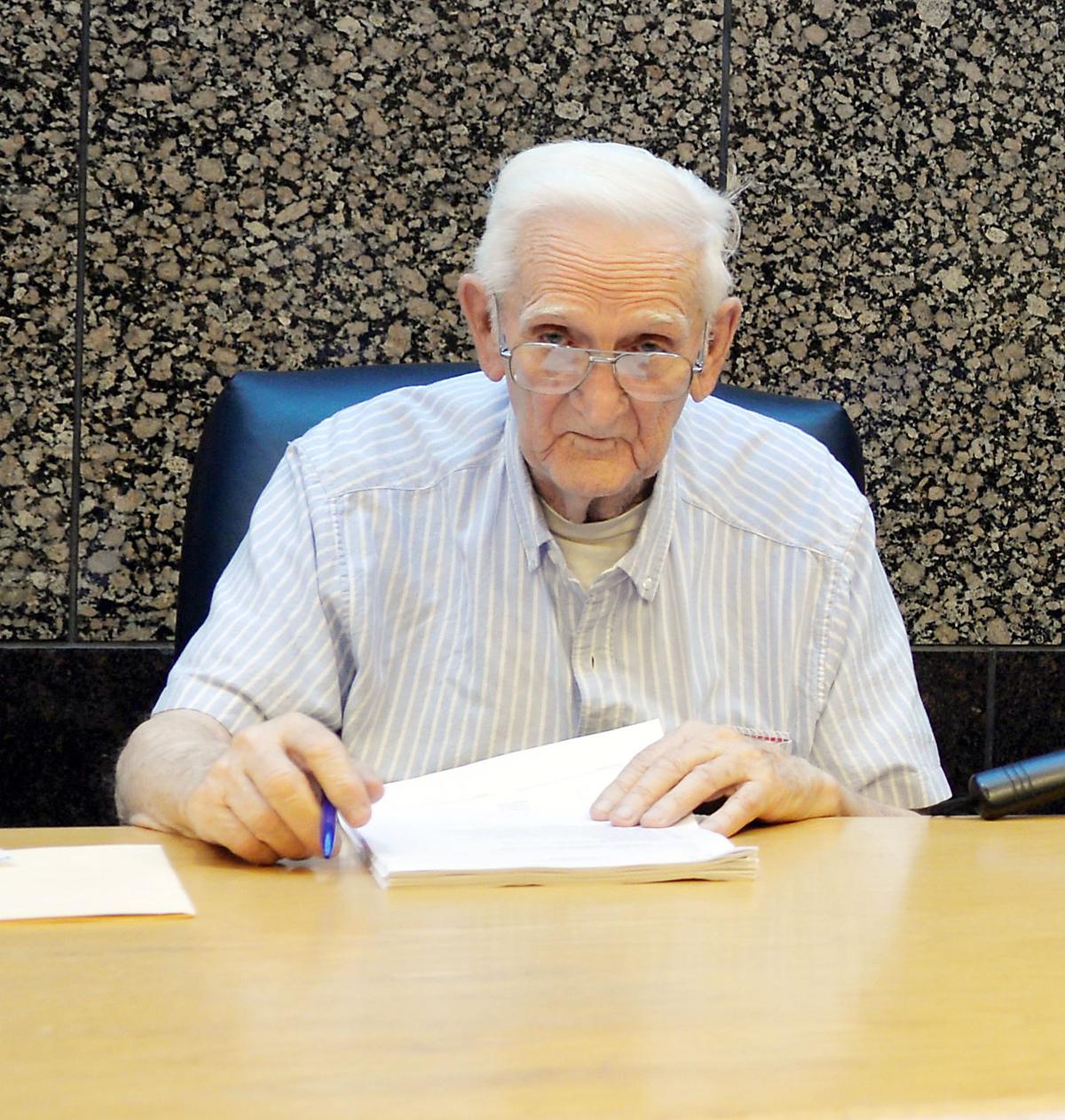 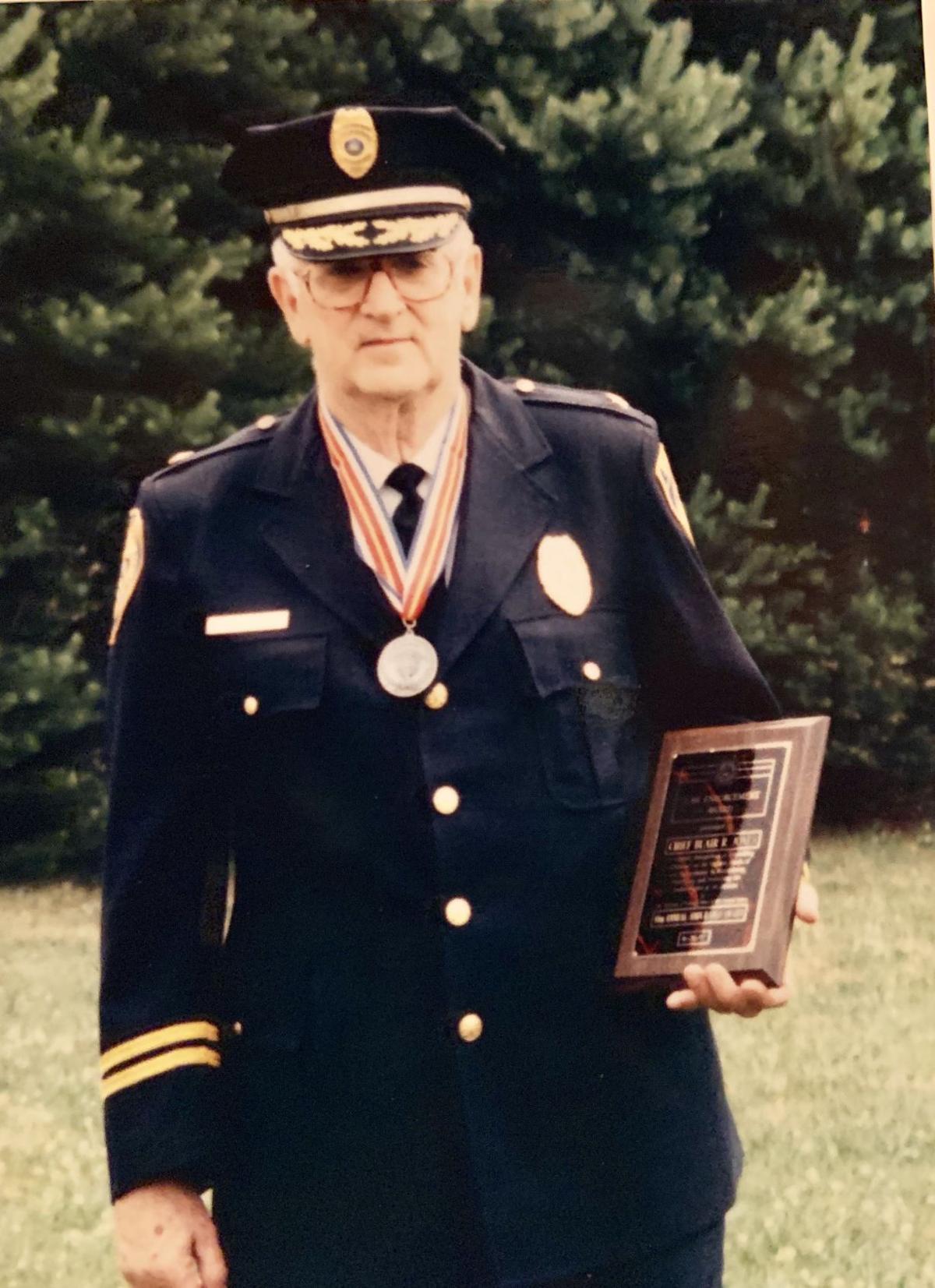 Pictured is Blair Jones upon receiving a law enforcement award from the Veterans of Foreign Wars in June 1997. Jones’s medal was for exemplary service to the people of Uniontown. 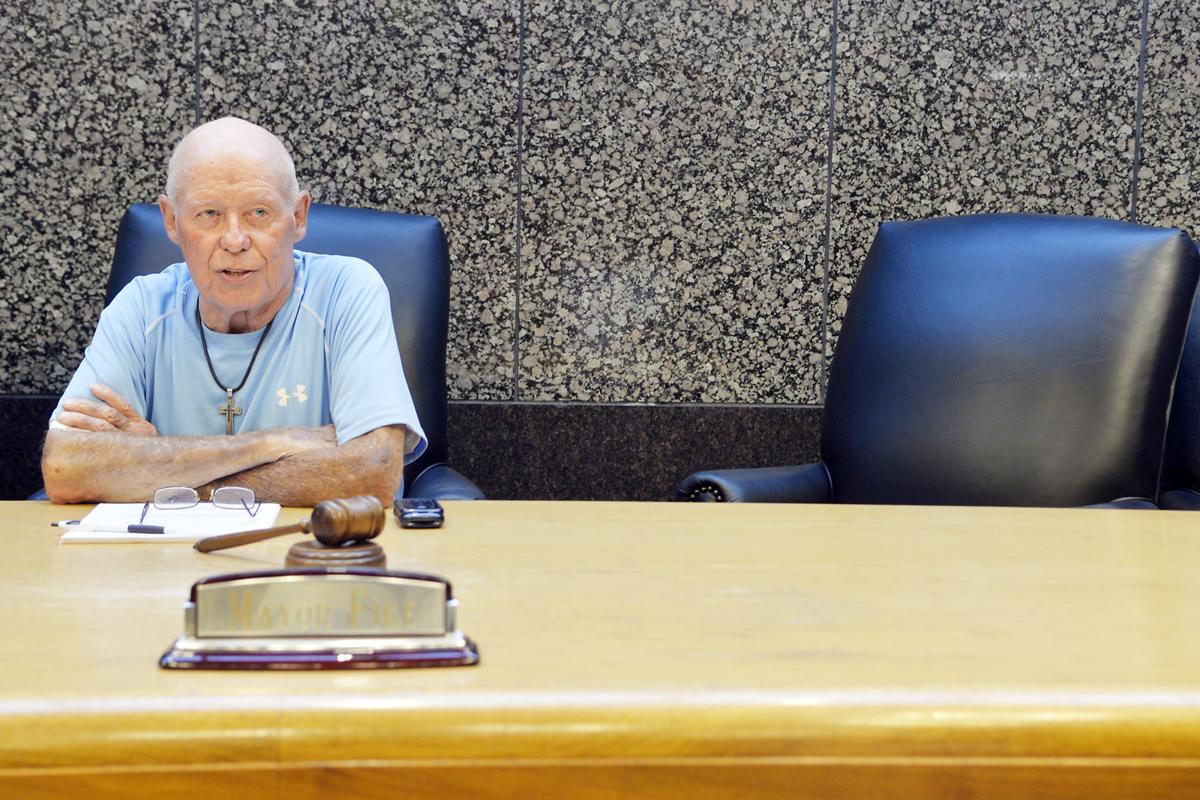 At Tuesday’s Uniontown City Council meeting, Mayor Ed Fike noted the empty chair next to him in council chambers where Blair Jones would normally sit. Jones died Monday at 92. “He was a living legend,” Fike said of Jones.

Pictured is Blair Jones upon receiving a law enforcement award from the Veterans of Foreign Wars in June 1997. Jones’s medal was for exemplary service to the people of Uniontown.

At Tuesday’s Uniontown City Council meeting, Mayor Ed Fike noted the empty chair next to him in council chambers where Blair Jones would normally sit. Jones died Monday at 92. “He was a living legend,” Fike said of Jones.

One of Uniontown’s longest-serving public stewards has died.

“He touched so many lives in his career, helping people that needed some help,” remembered his brother Allen Q. Jones, 95, of Dunbar Township.

“My dad’s love for the city of Uniontown was just unbelievable,” said Cathy Jeffries, 66, of Menallen Township, one of Jones’s six children.

Jones joined the Uniontown Police Department after having been honorably discharged in 1946 from the U.S. Army, for which he served as a paratrooper in World War II.

Jones was appointed as a regular patrolman on the city police force in 1952 and served with the department for nearly half a century. He became chief in January 1996 and retired in January 1998.

In 1999, Jones successfully ran for Uniontown City Council and had been a council member since 2000, overseeing the streets department.

“He was a living legend,” Mayor Ed Fike said.

Born on Mar. 18, 1927 to Gordon T. and Leah Blair Harrington Jones of Uniontown, Jones was the second youngest of seven siblings and the youngest son. Jeffries said that when the eldest sibling William went missing in action in World War II, William’s brothers joined different branches of the military to try to find him. Despite being underage, Blair wanted to join too, even running away from home at one point to do so. Eventually, Blair got to serve in the Army, serving as a paratrooper during World War II with the 3706 Q.M. Truck Company in Berlin.

Jones briefly worked in a coal mine after returning home but soon embarked on a long tenure for Uniontown city police, eventually working his way up from patrolman to chief over the course of a tenure that made him a source of rare knowledge about all things Uniontown for those he would later serve with as a city council member.

“I was amazed by how much he remembered about what happened in the city,” city Councilman Joe Czuchan Jr. said. “Some of the ordinances we had to refer to, he knew (them) like the back of his hand.”

“They used to call him 'Mr. Uniontown' because he knew where everything was,” Jeffries said.

Uniontown Police Chief Jason Cox said Jones would tell him that even during his tenure on council that he was still a policeman at heart and to see him if the city police force needed any resources.

“It was just having that confidence, once a cop, always a cop, that he was there for us,” Cox said. “I always had a lot of respect for that.”

Uniontown public works director Phil Mahoney, who worked closely with Jones as he oversaw the streets department over the past two decades, noted that Jones was a “hands-on guy” who didn’t shy away from an argument.

“No matter how many times Blair Jones and I disagreed, we always kissed and made up,” Fike said.

Jones was preceded in death by his wife, Rose Ann Williams Jones, who died in 1992, and had six children: Lois Cooper of Uniontown, Bonnie Blaira Lough of Carmichaels, Nancy Santer of Uniontown, Jeffries, Bill Jones of Pittsburgh and Blair Jones Jr. of Farmington.

Cooper recalled her father making dinner for his four daughters on Mother’s Day, while Lough recalled him being able to make her believe she would be OK even at the worst of times.

“When we went to him with a problem, he always knew what to do: give us hugs and love,” Santer said.

Blair Jr. recalled his father always sticking by him no matter if he was right or wrong, and Bill recalled fond memories of their large family convening for Sunday dinners at Jeffries’s house.

Jones was a lifetime member of Veterans of Foreign Wars Post 47 and member of Great Bethel Baptist Church.

Jones earned a Democratic Party nomination in the May primary, seeking a sixth term on council.

His death creates a vacancy that a majority of the remaining city council members must appoint a successor to fill within 30 days of the vacancy to serve the remainder of Jones’s unexpired term through the end of 2019, per Third Class City Code. If council does not appoint a successor within 30 days, President Judge John F. Wagner Jr. must fill the vacancy upon either the petition of at least 10 qualified city electors or the petition of a majority of the remaining members of council.

Since Jones was on the Democratic ballot for November’s general election, the Fayette County Democratic Party must choose a city resident to replace him on the ballot by Sept. 23, according to Fayette County Election Bureau Director Larry Blosser. If the party does not file paperwork selecting a new candidate by Sept. 23, the person receiving the highest number of write-in votes will win a seat on council, Blosser said.

Two four-year council terms are up for grabs in addition to a contested mayoral race, and Czuchan is still seeking one of the two seats as a Democrat. There are no Republican non-mayoral candidates on the general election ballot.

“I remember him going to vote recently,” Councilman Martin Gatti said of Jones. “He could barely do it, but he said, ‘I wouldn’t miss it.’ He’s one of a kind.”

Allen Jones remembers his brother as a “quality person in the community and the city.”