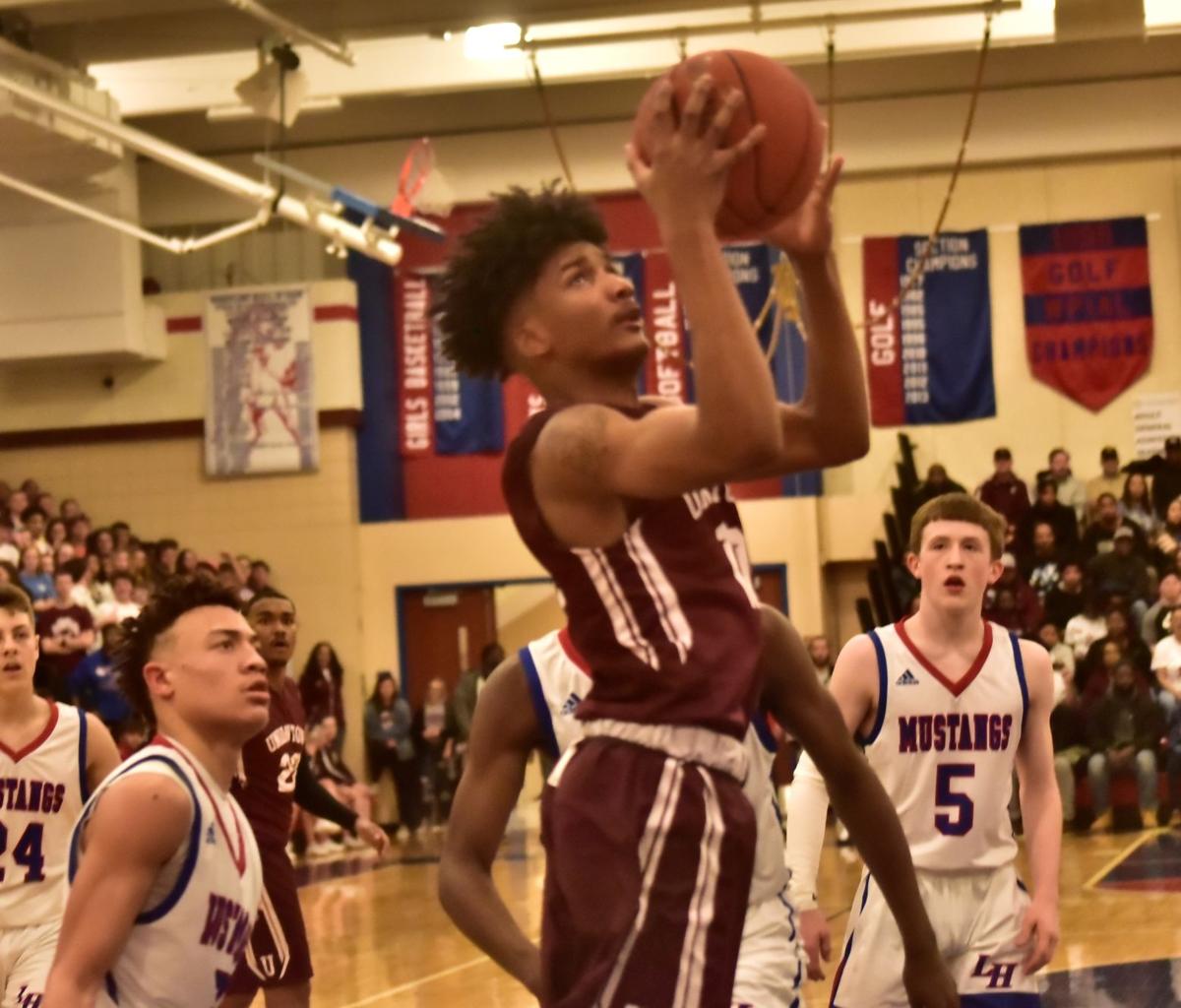 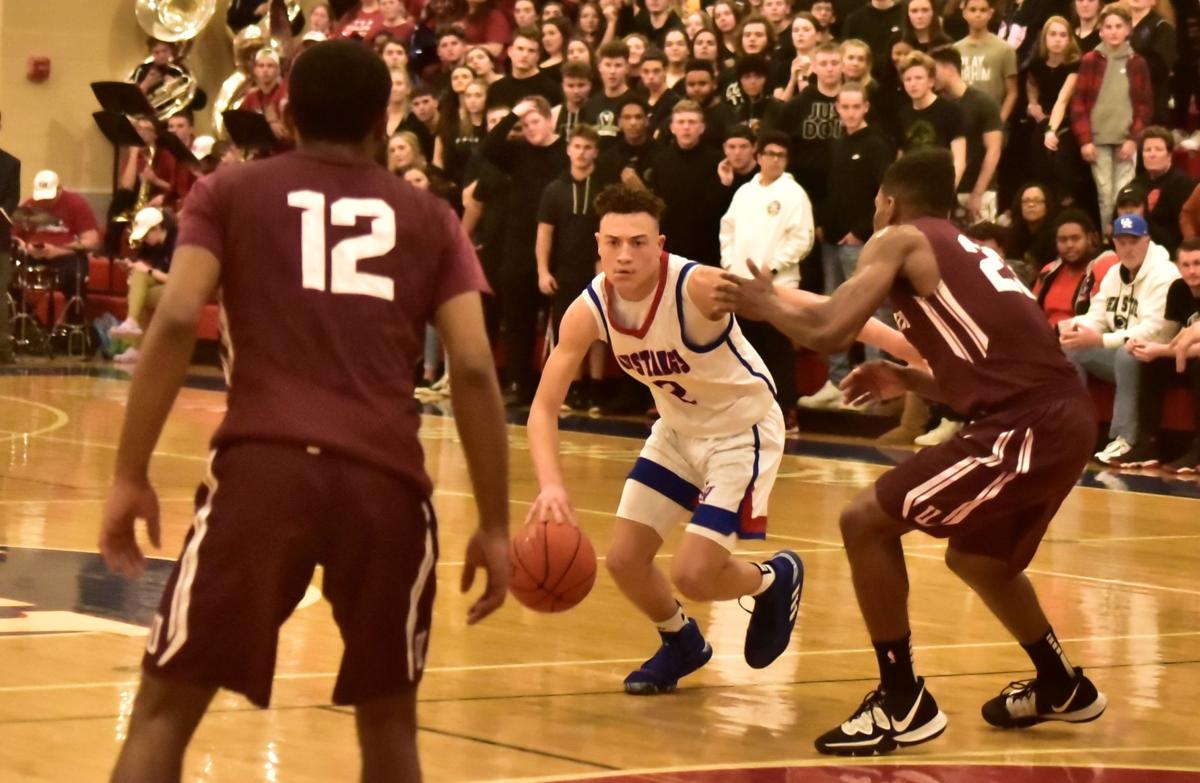 Laurel Highlands’ Rodney Gallagher drives to the basket while being defended by Uniontown’s Isaiah Melvin in Monday’s non-section game at Harold “Horse” Taylor Memorial Gymnasium. The Red Raiders’ Ray Robinson is ready to help out Melvin on defense. 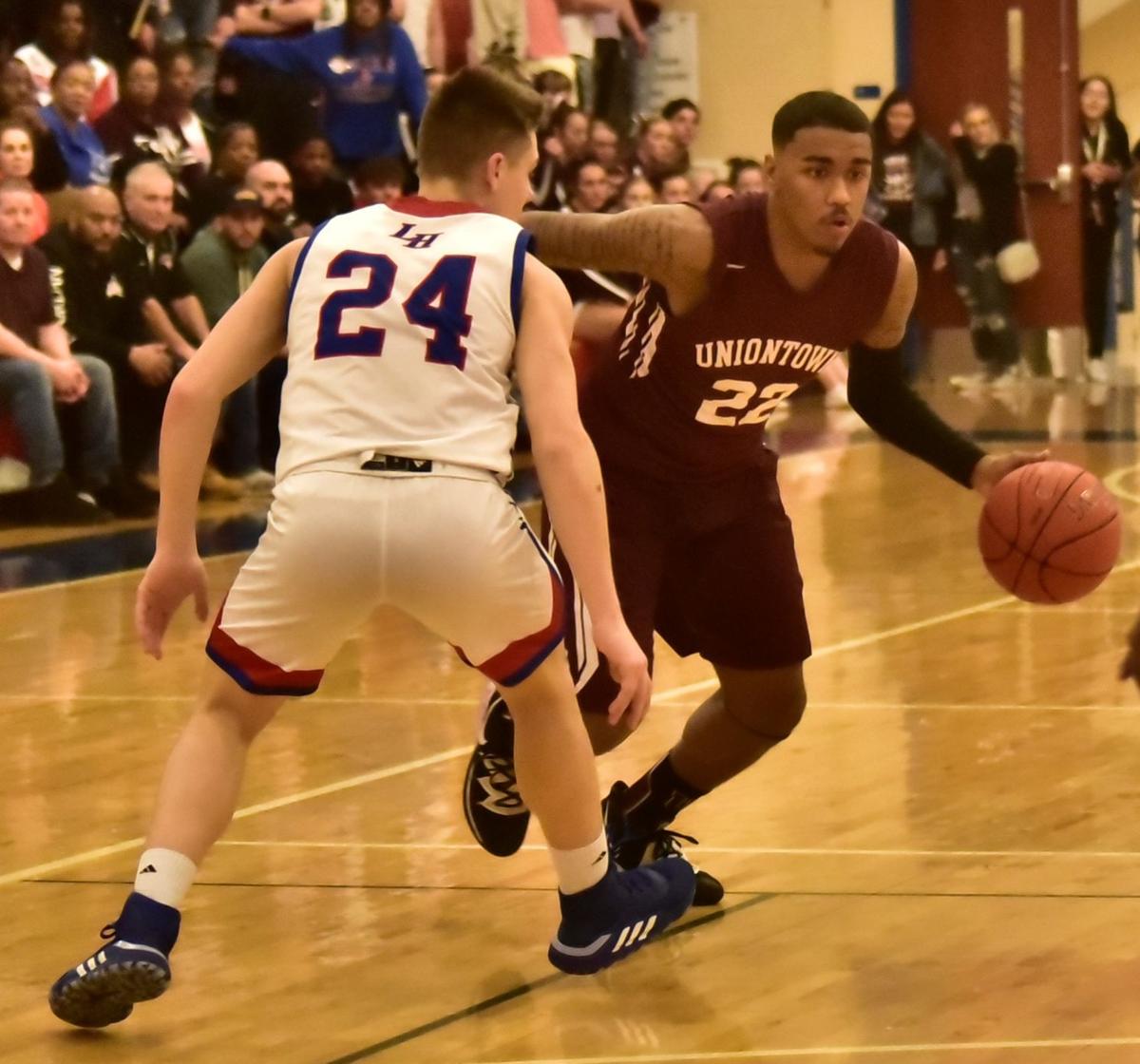 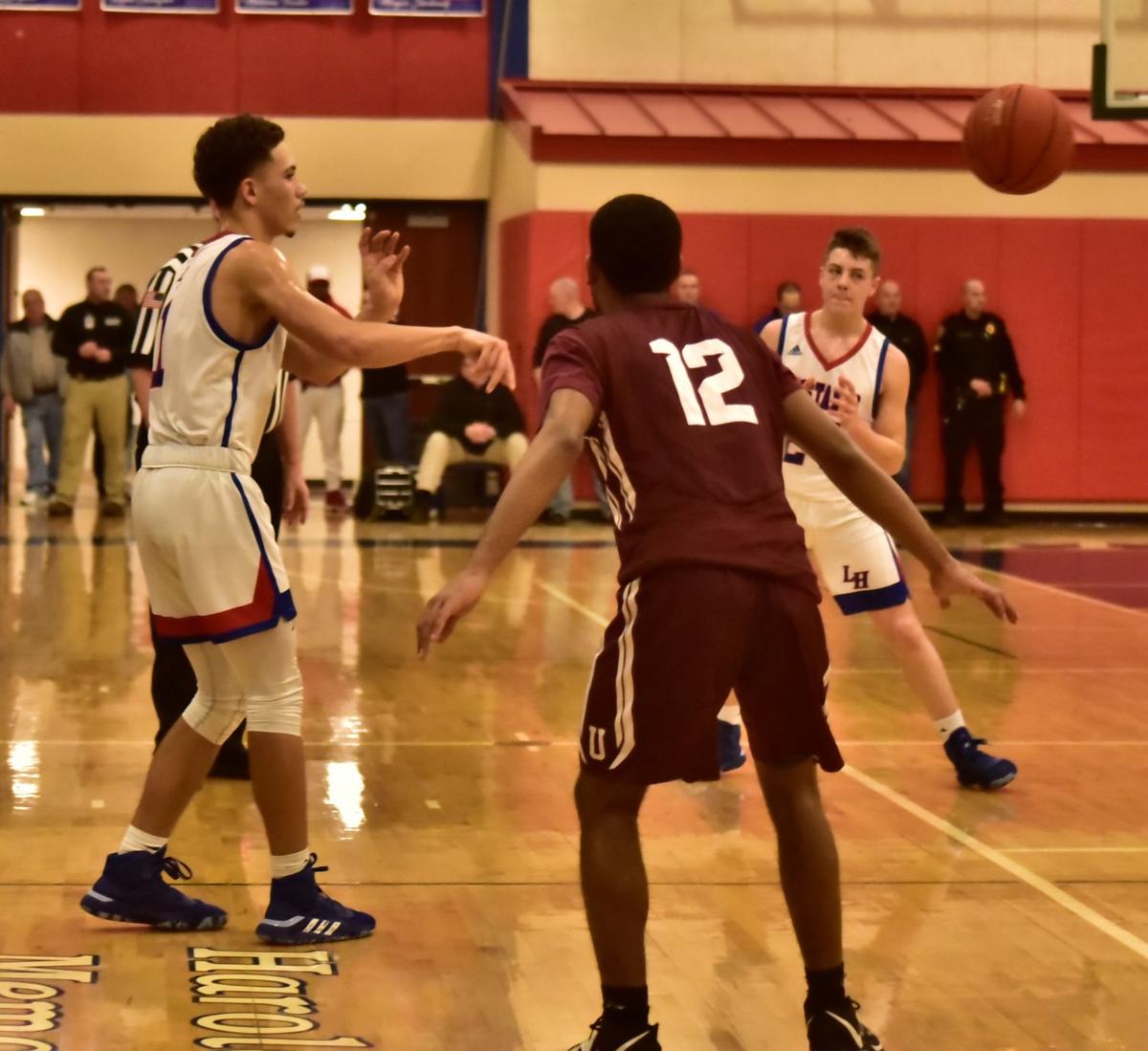 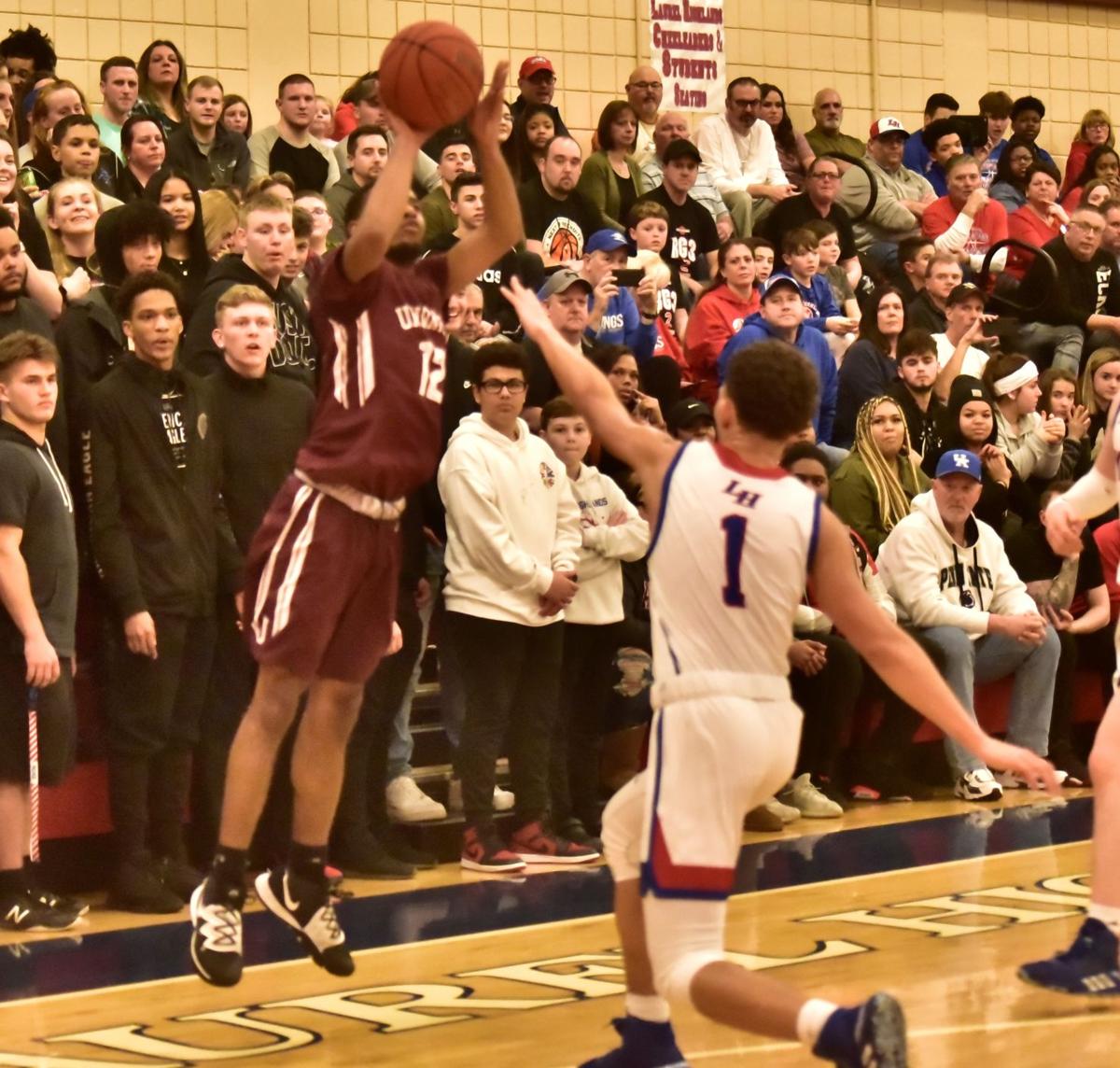 Uniontown's Ray Robinson puts up an outside shot as Laurel Highlands' Keandre Cook gets a hand up during Monday's non-section game at Harold "Horse" Taylor Memorial Gymnasium. 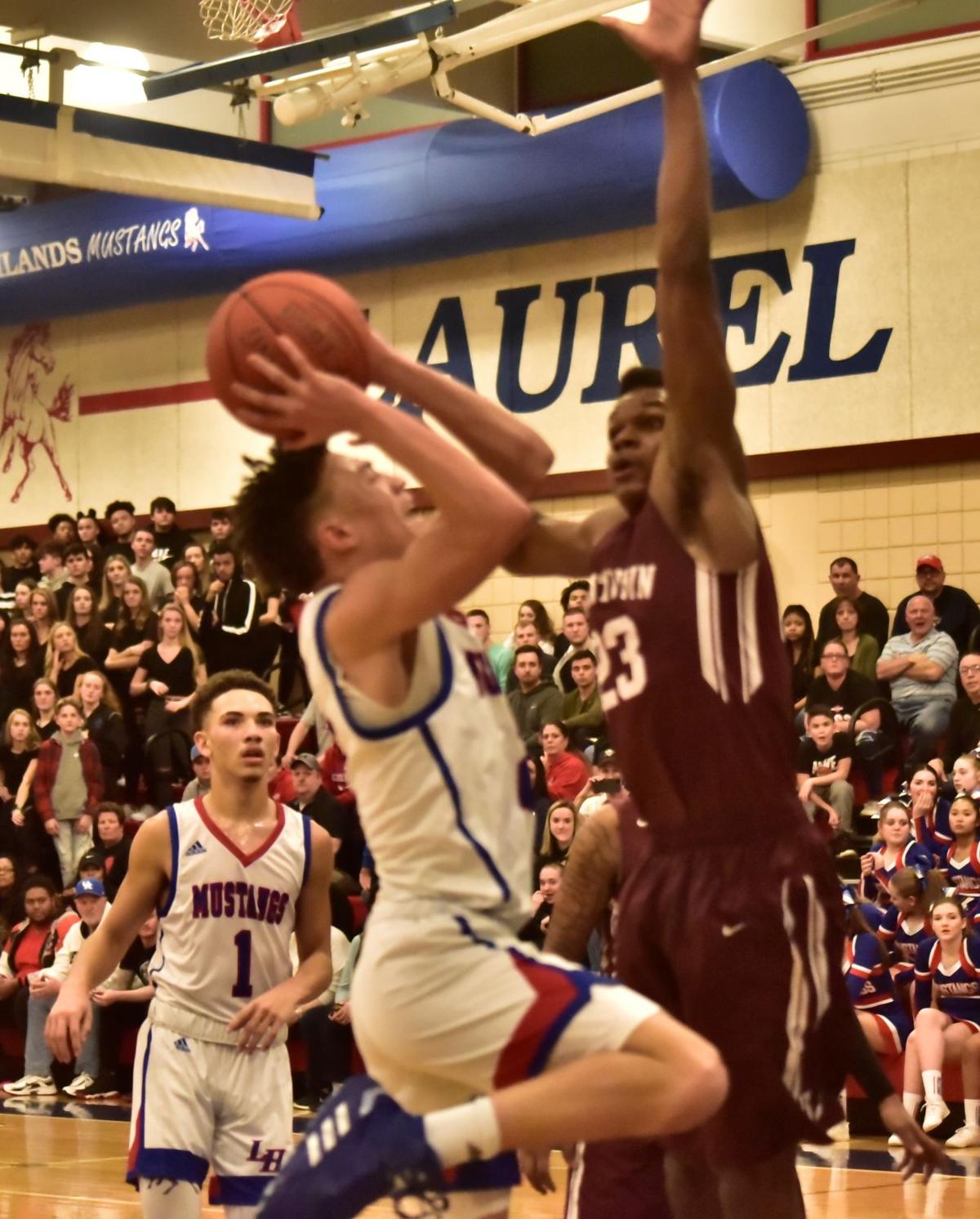 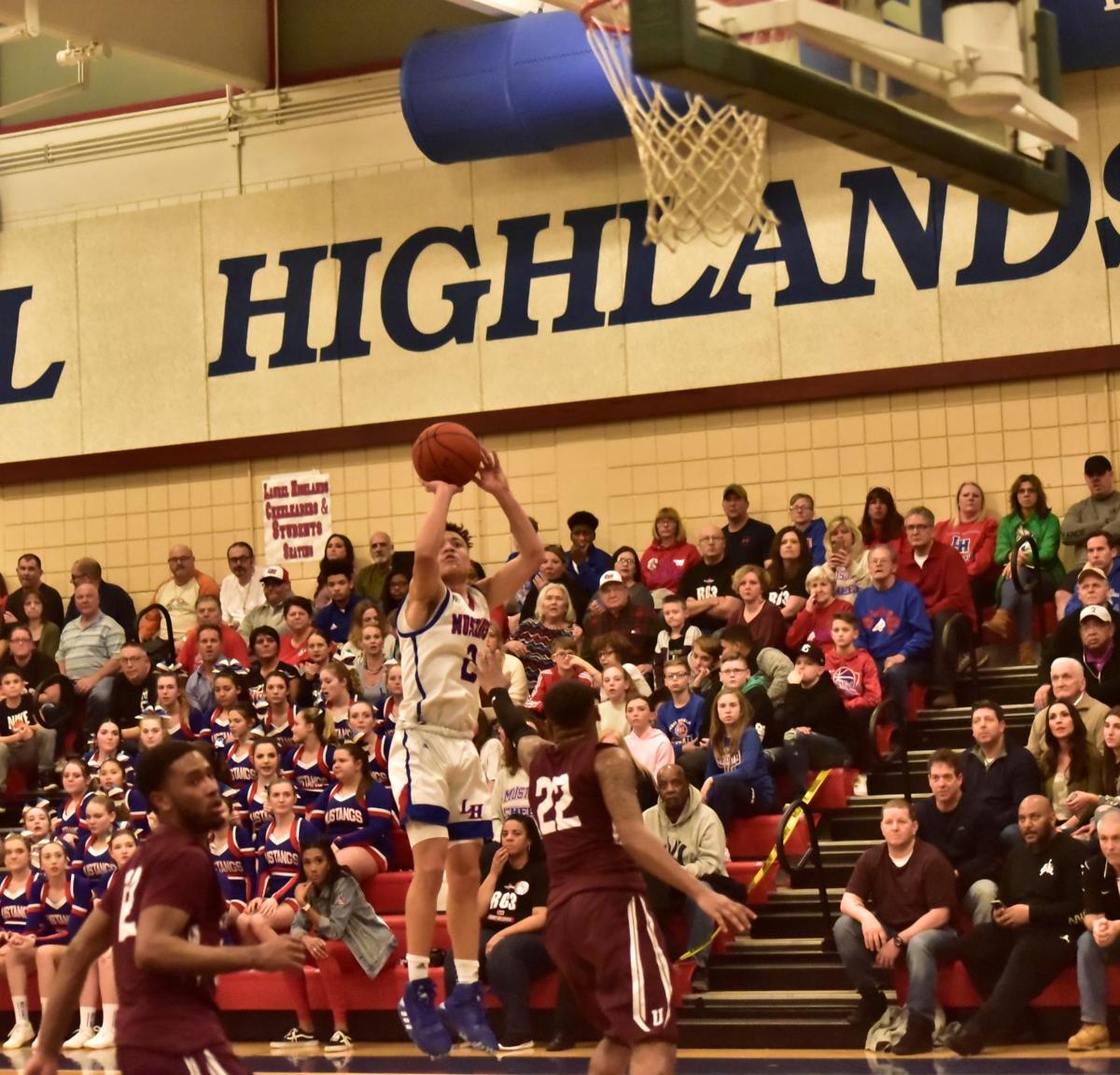 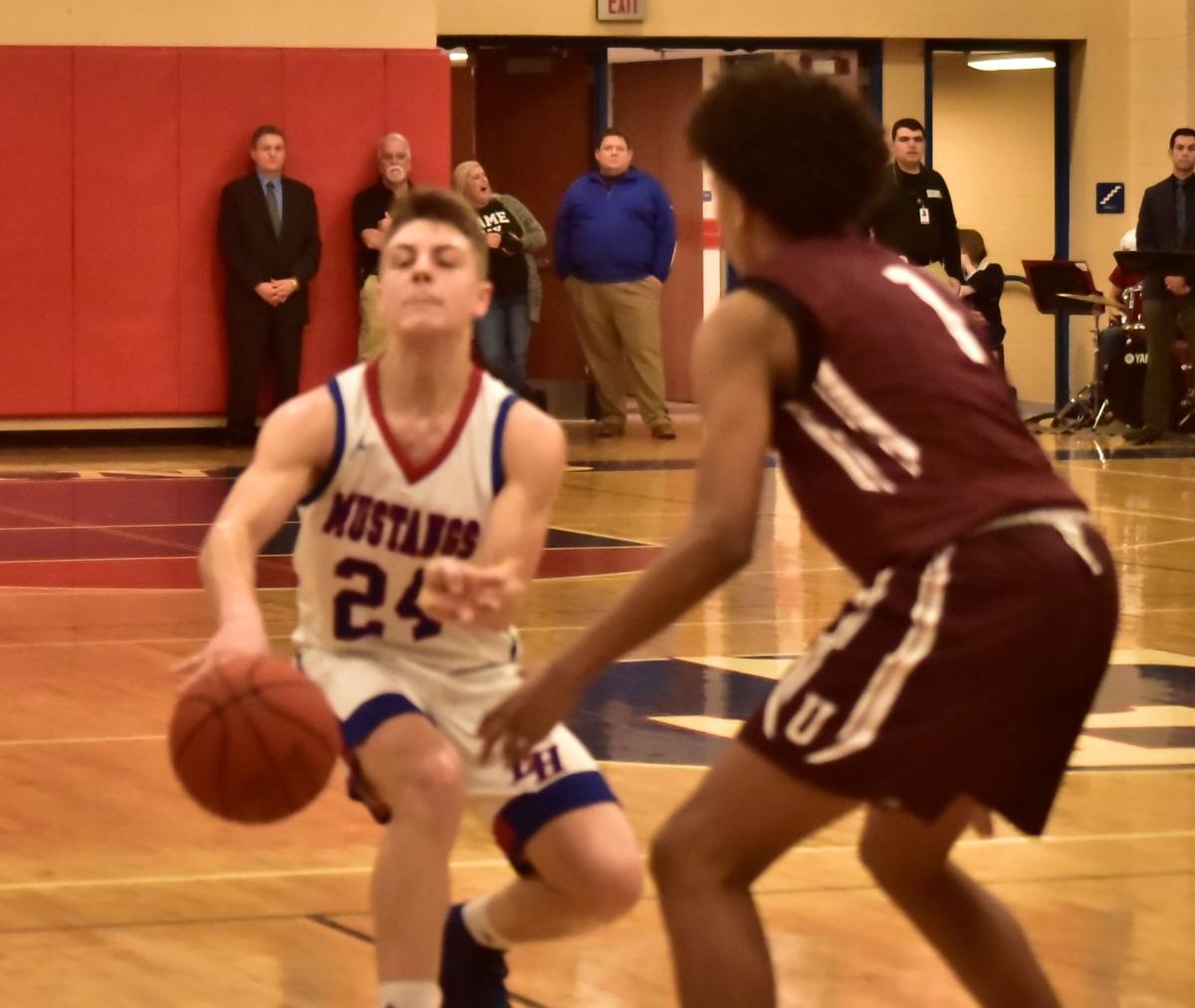 Laurel Highlands’ Rodney Gallagher drives to the basket while being defended by Uniontown’s Isaiah Melvin in Monday’s non-section game at Harold “Horse” Taylor Memorial Gymnasium. The Red Raiders’ Ray Robinson is ready to help out Melvin on defense.

Uniontown's Ray Robinson puts up an outside shot as Laurel Highlands' Keandre Cook gets a hand up during Monday's non-section game at Harold "Horse" Taylor Memorial Gymnasium.

Uniontown avenged its Jan. 29 overtime setback to Laurel Highlands on Monday in a 65-45 victory in non-section play at Harold "Horse" Taylor Memorial Gymnasium behind a career-high 30 points from Jahmere Richardson.

The Red Raiders (20-2) and Mustangs (13-8) are both headed to the WPIAL playoffs. Uniontown is hoping to secure a top-four seed and a first-round bye, while Laurel Highlands is glad to be back in the postseason after not qualifying last year.

"That's probably the first game in 19 years that we were never in our 2-2-1 press, but our kids did a zone, we put Isaiah (Melvin) on top of the zone, and our kids moved," Uniontown coach Rob Kezmarsky said. "We played hard, we moved the ball against the zone, we made shots and I'm just proud of our kids.

"Give all the credit to Uniontown," Laurel Highlands coach Rick Hauger said. "They played well, and for a period of time, we were doing well getting good shots but not getting anything to drop. Defensively, it seemed like we were a step behind all night as far as getting out on their shooters.

"We have a second season. Other than local interest, this game has no bearing on the playoffs, but obviously you want to put on a good performance in front of a good crowd. Down there, we did, up here, we didn't play well. We turn the page, get back to work and do the best we can."

Monday's contest was the 114th meeting between the cross-town rivals, the Red Raiders have a 67-47 lead in the series.

"This is a rivalry game and it is always a fun time coming in here with the crowd and the atmosphere," Melvin said. "The fans get really into it, and it makes the players even more excited to go out and perform. You are going to hear some things about this game, but that's what makes it fun, and it's part of the competition, but it's what happens on the court that counts."

Richardson made 14 field goals (one 3-pointer) and was 1 of 2 from the foul line, but gave all the credit to his teammates for setting him up.

"I give all the credit to Billy (DeShields) for feeding me with all those great passes," Richardson said. "I really don't care how many points I score as long as we win. I am definitely going to miss playing LH since this is the last game I will play against them. The atmosphere is great."

DeShields had 17 points on seven field goals (one 3-pointer) and was 2 of 5 at the line.

Ray Robinson scored seven points on two 3-pointers and was 1 of 2 at the line. Robinson's threes came in the first quarter, as Uniontown jumped out to a 19-11 advantage.

"We are a calm team and know how to keep our composure," Robinson said. "We play as a team and pick each other up. This was a great team win."

Rodney Gallagher scored seven of his team-high 23 points for the Mustangs in the first period. He connected on eight field goals (two 3-pointers) and was 5 of 6 at the line.

The Red Raiders outscored the home team, 16-11, in the second quarter for a 35-22 halftime lead. DeShields put his team up 15 with 1:30 left before halftime when he made a jumper while being fouled and connected on the and-one for a three-point play.

"I went into him because he was off the ground, and I knew it was going in and I was definitely happy to have that shot fall and get the and-one," DeShields said. "We are real happy to be able to come here and get a decisive win after they beat us the last time at home."

Laurel Highlands opened the third quarter on a 6-2 run to cut the deficit to 37-30 with 5:26 left, but Kezmarsky called a timeout, regrouped his troops and Richardson scored six straight points for a 43-30 advantage. Richardson scored 10 points in the third, and Uniontown had a 47-35 lead heading into the fourth.

"I thought our fastbreak game in the second half was phenomenal," Kezmarsky said.

"We talked in the locker room after coming out in the third quarter about finishing them off," Richardson said. "I think we did a great job of closing things out."

The Red Raiders outscored the Mustangs, 18-10, in the fourth period.