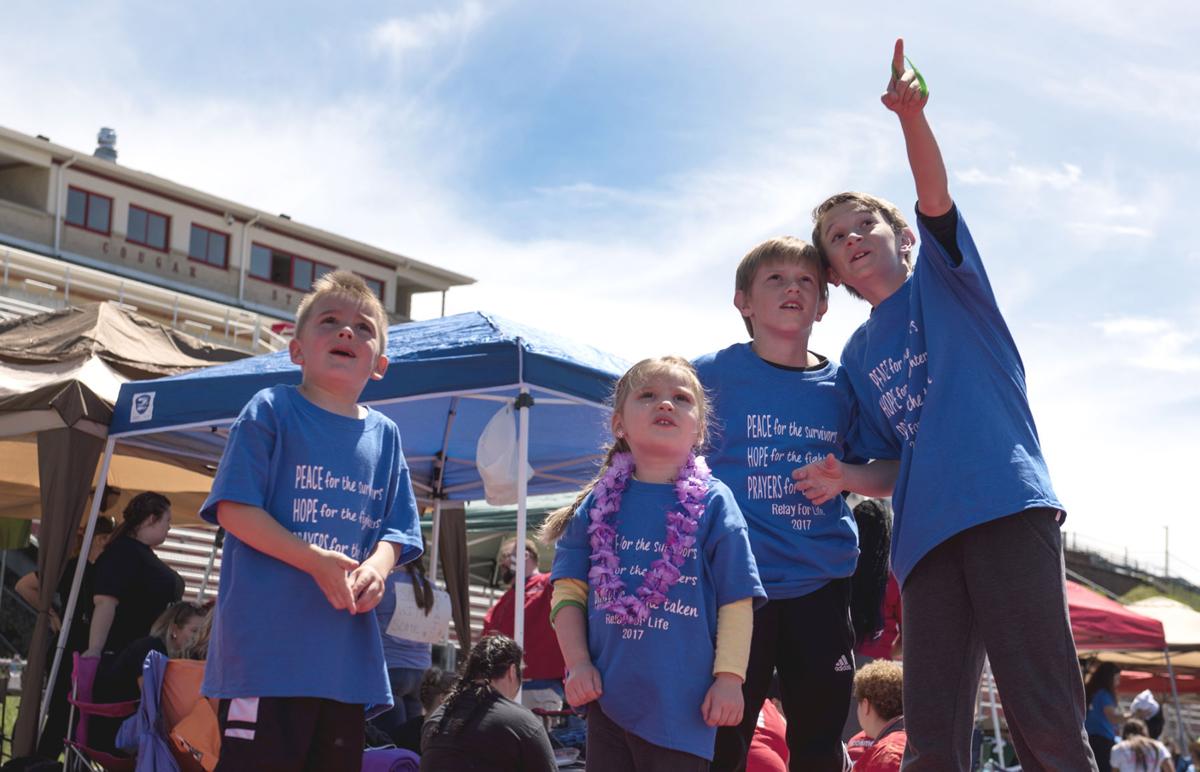 11-year-old Kristopher Weston points at the sky showing his brother, Kaden, 9 the balloons they released in memory of their loved ones who passed away from cancer. The brothers and their cousins, Adalynn Ficca, 3 (center) and Mason Sawicky, 5 all "launched balloons to heaven", every hour during the Relay for Life event at Charleroi High School stadium on Friday. 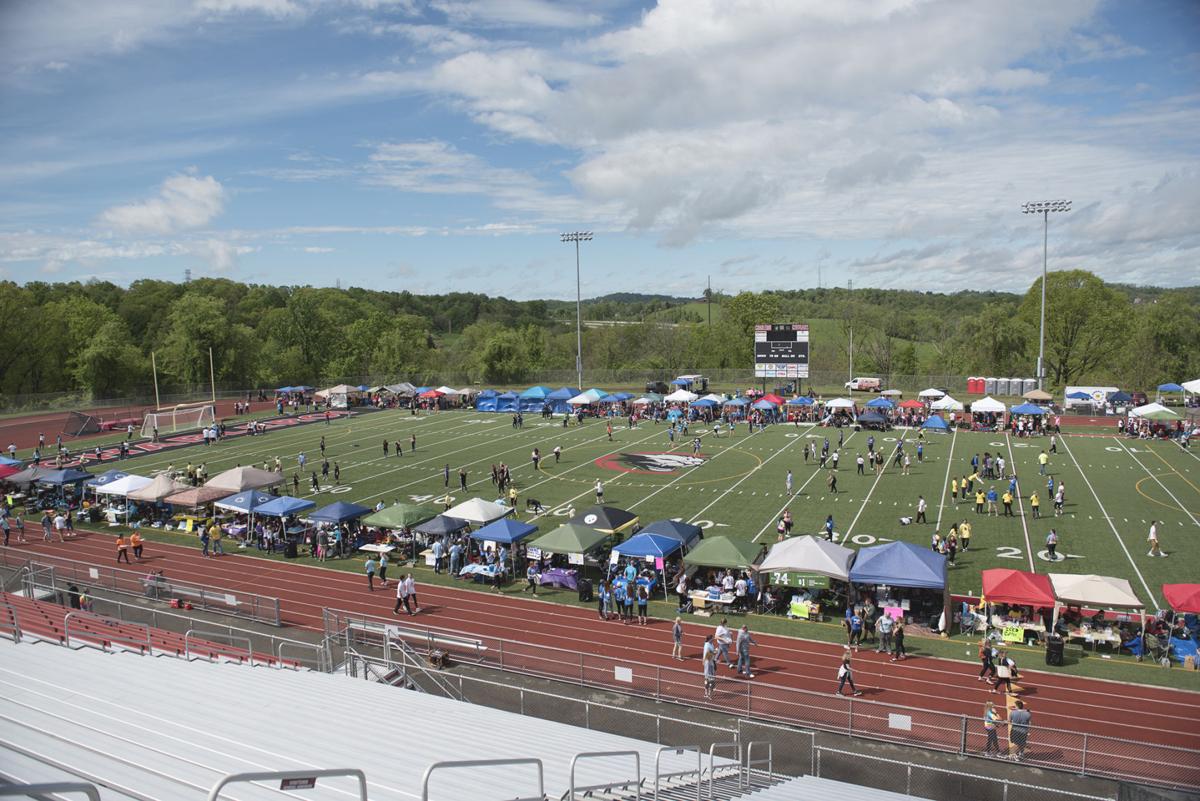 Various high schools and organizations from around the region participated in the annual Relay for Life fundraiser at Charleroi High School Stadium on Friday. 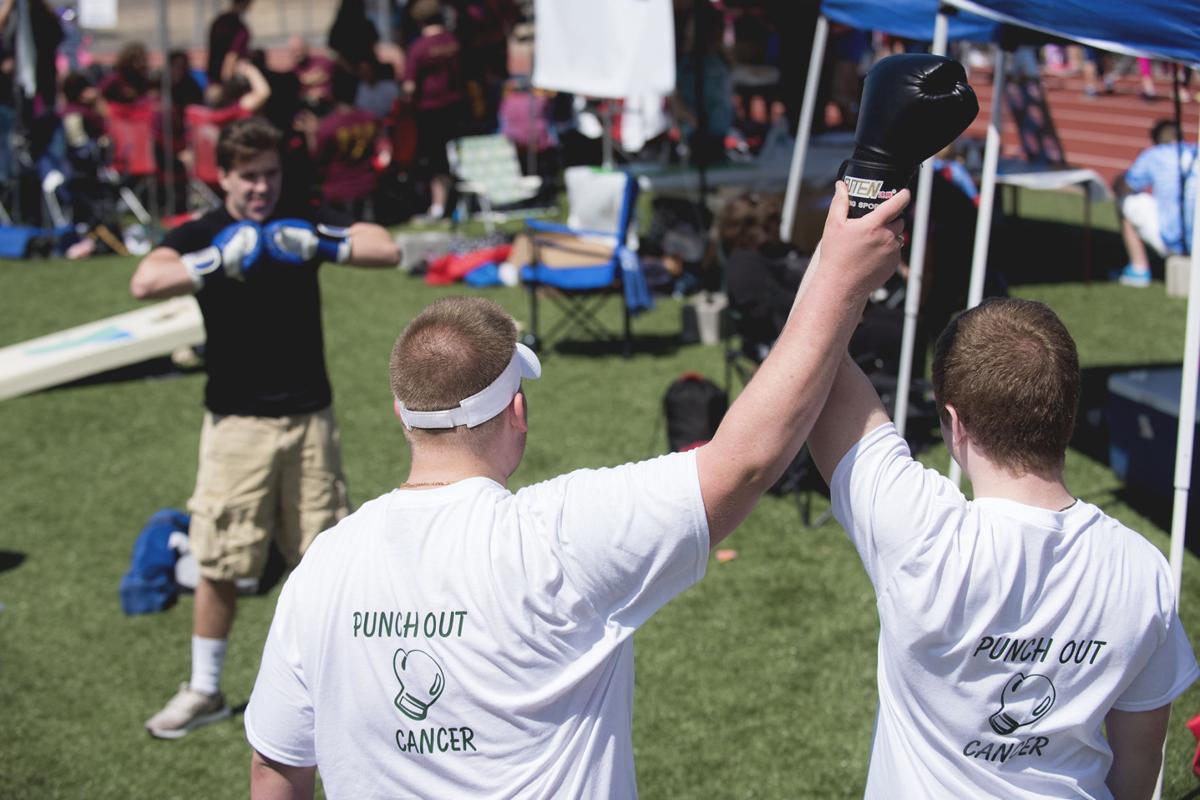 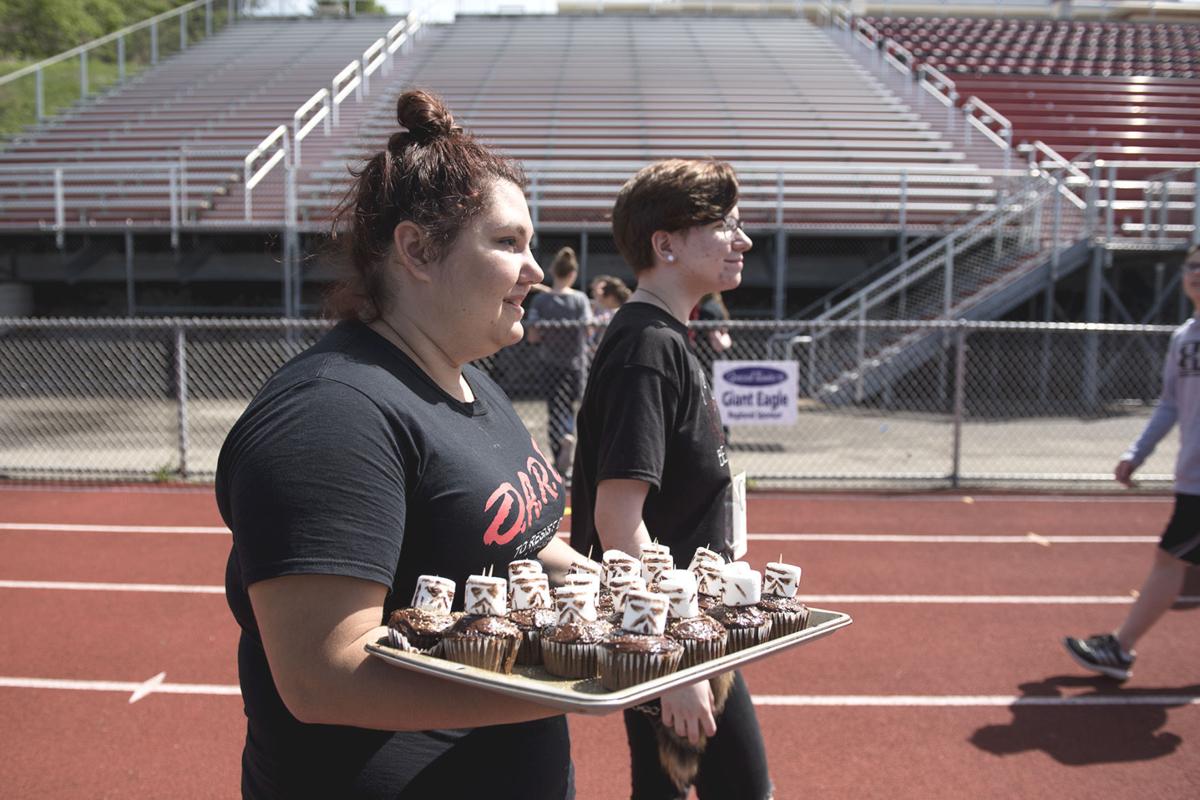 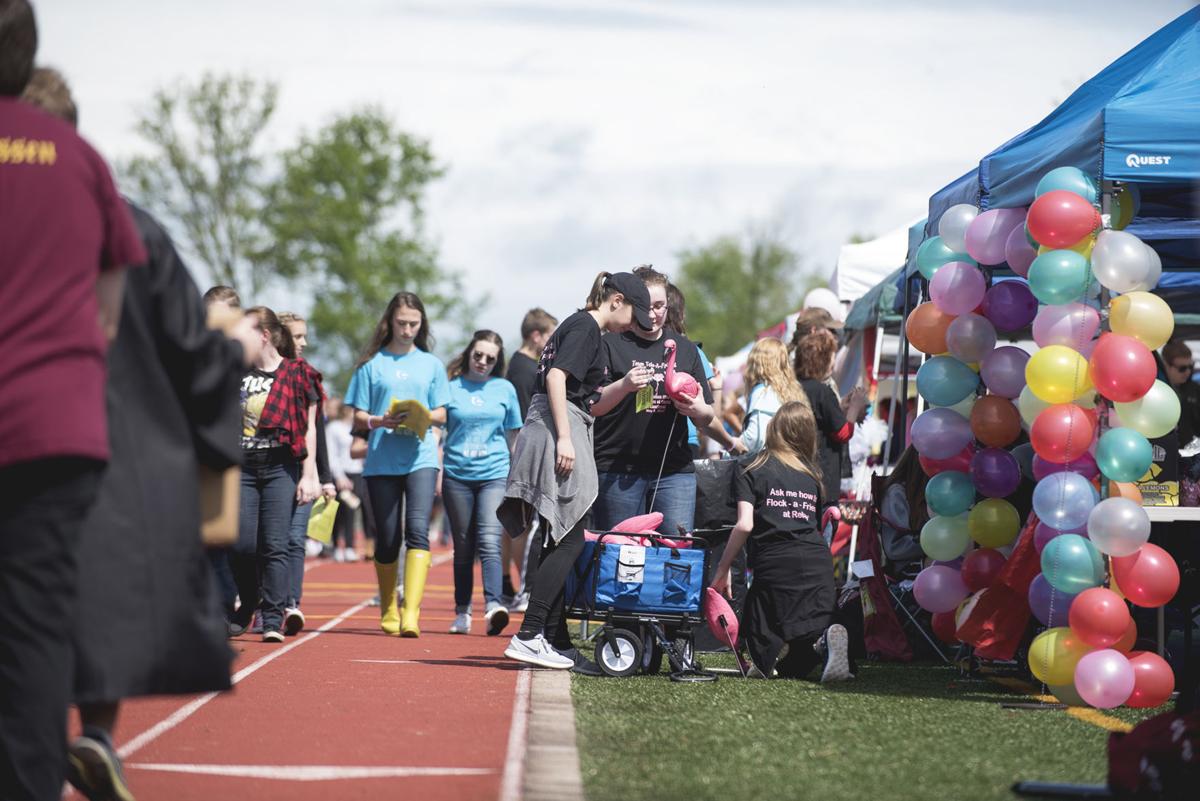 11-year-old Kristopher Weston points at the sky showing his brother, Kaden, 9 the balloons they released in memory of their loved ones who passed away from cancer. The brothers and their cousins, Adalynn Ficca, 3 (center) and Mason Sawicky, 5 all "launched balloons to heaven", every hour during the Relay for Life event at Charleroi High School stadium on Friday.

Various high schools and organizations from around the region participated in the annual Relay for Life fundraiser at Charleroi High School Stadium on Friday.

Standing in Cougar Stadium in Charleroi, Kristopher and Kaden Weston release balloons with “messages to heaven.”

The elementary-aged boys joined more than a dozen family members at the Youth Relay for Life, Friday, remembering their family members lost to cancer.

They operated a booth at the Relay for Life, selling Starbucks coffee and conducting a silent auction. The family also sold “messages to heaven,” helium balloons with handwritten messages of hope, which were released hourly.

Family member Renee Kurdilla lost her mother, Jean Waggett, and sister Lisa Weston to cancer within a six-month period in late 2014 and early 2015. Her father, Robert Waggett of Belle Vernon, is a cancer survivor.

“It’s more emotional for me having lost my mom and sister,” Kurdilla said of the day’s events. “It’s awareness. It’s hope for those who are going through it or loved ones going through it. It’s bonding.”

“It’s happy and sad at the same time,” Kurdilla said. “You remember them every day, but we feel we’re doing something for them to remember them and honor them.”

“It’s nice to have all of us together,” said Sawicky, niece of Jean and Robert Wagett.

“We’re all positive during the day. The hardest part is the luminary ceremony. It brings back so many thoughts and memories.

“Who loses a father and daughter? That’s not fair.”

Schools from Charleroi Area, Monessen, Elizabeth Forward, Belle Vernon Area, Ringgold and Frazier participated in the 12th annual Relay for Life. They set up booths around the football stadium, selling food and other items to raise money for cancer research. It had a carnival-like atmosphere, with students playing on the football field.

Members of each team take turns walking around the track in a relay that lasts from 10 a.m. to 10 p.m.

The theme for this year’s event was “movies.”

Organizer Jodi Cheplic said the event has raised more than $1 million over the years.

A survivors event with speakers and dinner was held 4:30-6 p.m. Each received a T-shirt and a gift.

A luminary ceremony began at 8 p.m.

Cheplic had a simple explanation for why Relay for Life is so popular.

“The kids love it,” Cheplic said. “Kids who graduated and did Relay for Life in high school come back each year. They get a sense of accomplishments.

“Most kids have had someone in their lives who was affected by cancer.”

One returnee was Lia Miceli, who helped form the Angels for Life team when she was in fourth grade.

Her grandfather died from colon cancer, and her grandmother is a breast cancer survivor.

“It would be impossible for anyone to say they were not touched by cancer, Miceli said.

“Being in medicine, doing this makes you appreciate what it means for a survivor to get well and thrive after a diagnosis of a disease like cancer,” Miceli said.

“For the kids involved, an event like this is educational in so many ways. They are building leadership and a sense of community. It’s good, clean fun and the kids rally around the community.”

Miceli recalled that Cliff Nickisher, who owned Texas Roadhouse in Washington, Pa., would bring a whole team along with a smoker and grill each year to Relay for Life. He succumbed a couple years ago to brain cancer.

“I’d like to think he is still here in spirit at this event,” Miceli said. “I’ll always keep his spirit alive. He was so kind and generous.”

Brovey said her grandfather died of cancer when her father was a teenager.

“It’s still something that upsets him to talk about,” Brovey said.

Boulanger said his grandmother, Jeannie Brewer, is a cancer survivor.

“All the money this organization can raise helps her survive,” Boulanger said.

Marucci said his grandfather was lost to cancer even before the Charleroi Area junior was born.

“All of the people out here are here for that one cause,” Marucci said.