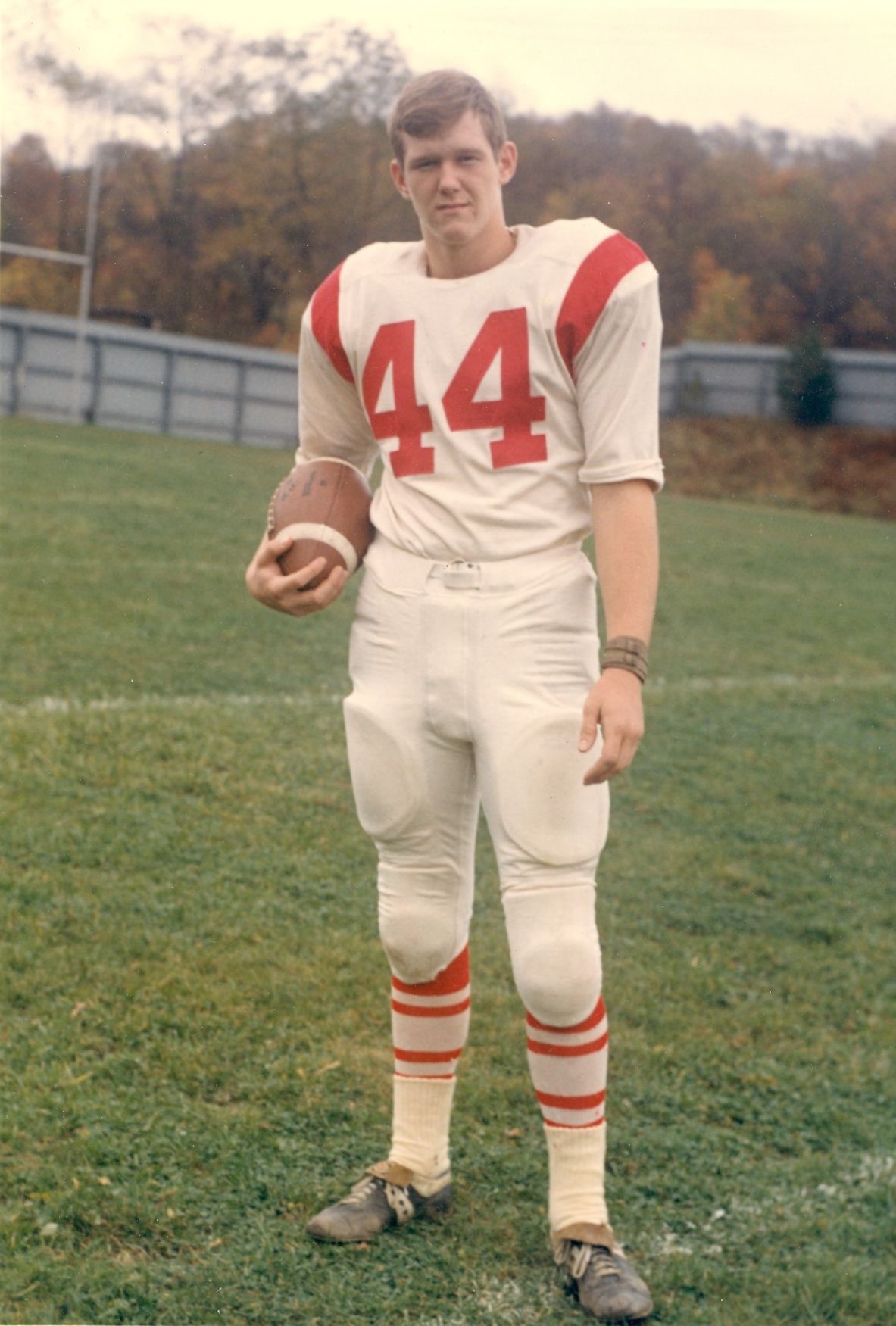 Warren Barkell is shown during his playing days at Southmoreland. 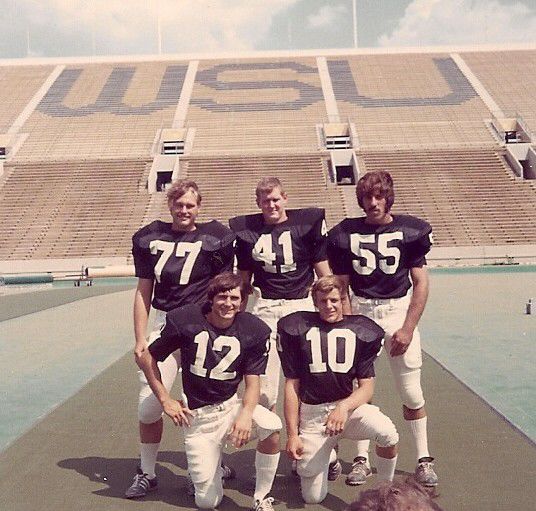 Warren Barkell is shown during his playing days at Southmoreland.

Warren Barkell was a two sport standout at Southmoreland High School in the late 1960s who went on to participate in college athletics and is forever linked to an airline tragedy in 1970.

“The first sport I went out for was track in seventh grade,” Barkell recalled. “I was attracted to track because I liked throwing things.”

In 1968 the Scotties opened with a 44-0 drubbing at the hands of Jeannette and then fashioned an outstanding season. The only other blemish was a 0-0 tie with California.

“Yeah I think we had an excellent group of guys on that 1968 team,” Barkell said. “We just developed to that point. Ray Gorman was the head coach, and Bill Mayers, Don Gilpin and Mike Banasick were assistant coaches.

“Coach Gorman was an excellent coach. He was the best head coach I had in my career. He was straightforward, he would talk with you. He was just a straightforward guy.”

The 6-foot-1, 210-pound Barkell was a fullback on offense and a linebacker on defense for the Scotties.

“I liked playing both offense and defense,” Barkell said.

As a senior Barkell rushed for over 500 yards and scored three touchdowns. He also handled the punting and boomed two 65-yard punts. On defense he was credited with 56 assisted tackles. He was named team MVP and garnered All-Westmoreland County honors.

“It was nice to be recognized,” Barkell said. “I had some talented teammates like quarterback Dave Czerniak, halfback Tom Surlas, wing back Sam Coffman and tackles Ron Frey and Matt Carolina to name a few. We had some talent. Coffman was a great, all-around athlete. He was picked as the top athlete in the senior class.”

Barkell excelled in track and field. His two signature events were the javelin and the discus. At one time he held the school record in both events. He threw the discus 136 feet, 8 3/4 inches in 1968. That record was broken by Kevin Keto in 1974 with a toss of 139-1 1/2. Barkell believes his javelin record still stands with a toss of 194-10 1/2. Barkell finished second in the javelin in the PIAA meet. The guy he beat at the WPIAL championships, Ken Andrews of Mohawk, beat him in the PIAA championships.

“We were very good in track and field,” Barkell said. “Don Gilpin was the coach and was outstanding. He produced winning track teams every year. Gilpin was great with the runners and Bill Mayers handled the field athletes. We were blessed with very good coaches.”

When Barkell graduated from Southmoreland in 1969 he looked at several scholarship offers.

Barkell played freshman football for the Wheat Shockers in 1969 and was on the varsity for the fateful 1970 season. Offensively in 1970 he had nine carries for 25 yards and caught two passes for 12 yards.

“I started the sophomore year as a guard,” Barkell remembered. “I hurt my knee right before the spring game and then enough of the backs got hurt and I ended up going to the backfield.”

Wichita State started out the 1970 season 0-3 with losses to Texas A&M, Arkansas State and West Texas State. They were scheduled to play at Utah State on Oct. 3. Two planes carrying Wichita State football players, coaches, administrators and fans refueled on Oct. 2 in Denver. The team was headed to Logan, Utah, for a game the next day.

The pilots of the “Gold” plane changed their flight plan, deciding to give their passengers a scenic view of the Rocky Mountains. But they could not pull the overweight plane, a Martin 404, out of a box canyon. It crashed around 1 p.m. about 40 miles west of Denver on Mount Trelease.

“It was unbelievable,” Barkell recalled. “I remember we were still in the air and we flew into Logan and we kind of sensed something was wrong because the airplane crew had changed their tone. When we landed that’s when we found out about the other plane.”

The pilots of the doomed aircraft were blamed for the accident by the National Transportation Safety Board. The NTSB also cited the “overloaded condition” of the plane and a “virtual absence” of planning by the flight crew. The state of Kansas paid an out-of-court settlement of $1.56 million divided among the heirs of survivors and the eight players who survived, on the condition all lawsuits be dismissed.

Thirty-one people died as a result of the crash: 14 players, most of whom were starters, 14 WSU staff and boosters, and three crew members. Twenty-nine died at the scene, including Wilson and his wife. Trainer Tom Reeves and athlete John Taylor died later in hospitals after suffering burns. Eight players and the co-pilot survived.

The Shockers voted 76-1 to continue the season against Arkansas in Little Rock. The Shockers took 46 players to the game, 39 of them freshmen and sophomores. The NCAA allowed WSU to play freshmen, who were ineligible at the time by NCAA rule. The Shockers finished the 1970 season 0-9.

“We voted to continue playing that season,” Barkell said. “We figured that’s what our teammates would want us to do.”

Each year, the university holds a ceremony on campus at the Memorial ’70 monument.

“I’ve been trying to make it back,” Barkell said. “I didn’t know about the gathering for a number of years and then I found out. I haven’t made it back every year. But I get back as often as I can. My roommate in 1970 was John Duren who died in the crash. He was a very good Christian and a wide receiver, a sophomore as well, thinking about dentistry as a possible future. He was from Oklahoma.”

Barkell continued to play football as a linebacker on Wichita State squads that went 3-8 in 1971 and 6-5 in 1972. He also decided to go out for the track team on his own and once again excelled at the javelin. He won the Missouri Valley Conference javelin event in 1971 with a throw of 191-1 3/4.

Barkell graduated from Wichita State in 1974 with a degree in mechanical engineering and got a commission in the Army reserves. He took a job with Shell Oil in Denver, then entered the service and was in the Army for three and a half years. He stayed in Army reserves and retired a Lieutenant Colonel and got his Professional Engineer Status.

In 1978 he worked for Westinghouse R&D Center in Pittsburgh as a mechanical engineer for 17 years. Barkell has a masters in mechanical engineering from Carnegie Mellon University in 1983. He was transferred to Bettis Atomic Power Laboratory in West Mifflin and worked there for 18 years until his retirement in 2013.

Now 69, James Warren Barkell resides in Penn Township with his wife of 46 years Patricia. They have a son Mark and a daughter Meghan. They are blessed with six grandchildren.

“Athletics made a big difference in my life,” Barkell stated. “I got to be around a great group of guys and see a lot of different things. I’m happy.”