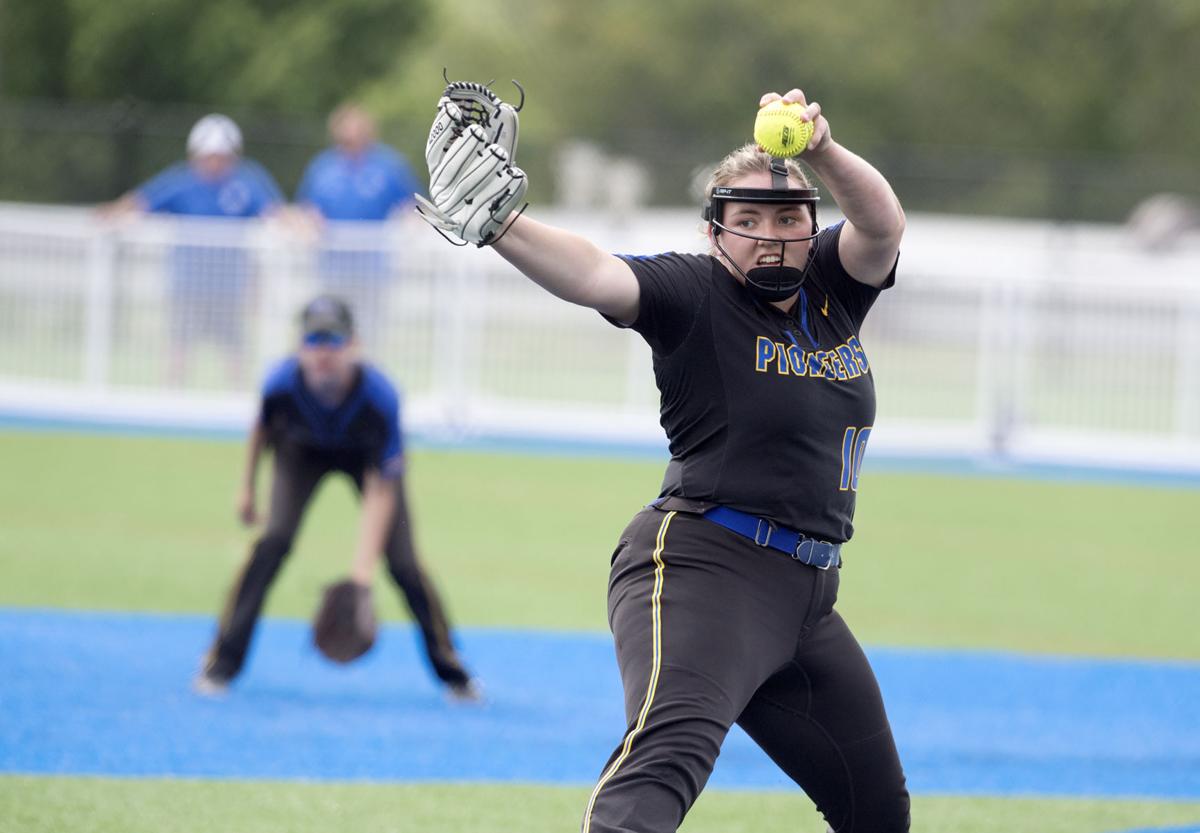 West Greene’s Jade Renner pitches against Jefferson-Morgan during a WPIAL Class A semifinal game at Trinity Middle School last year. Renner was in the circle for three WPIAL championships and two PIAA titles for the Lady Pioneers, but the Edinboro recruit had her senior high school season cancelled due to the coronavirus pandemic. (Photo by Celeste Van Kirk) 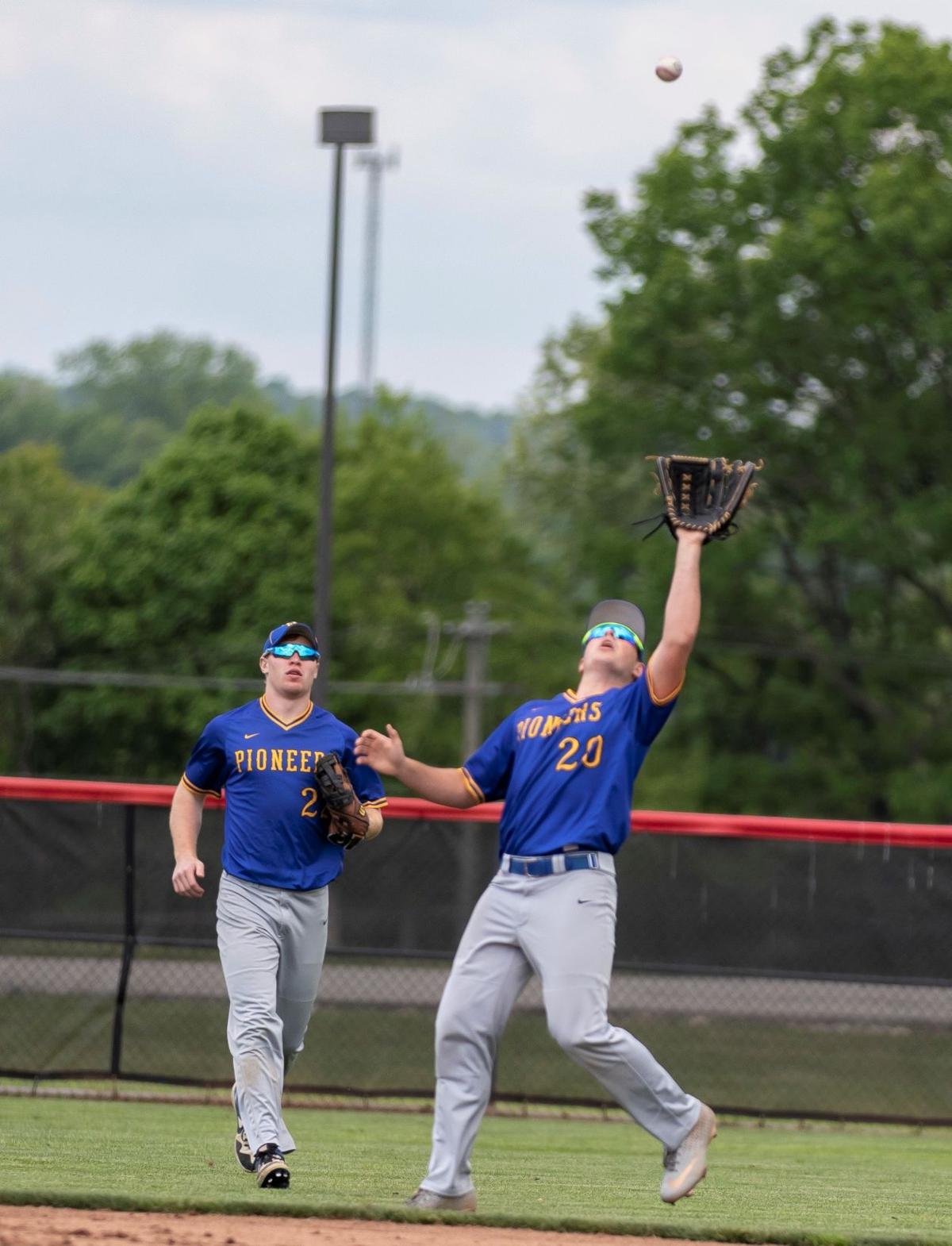 West Greene’s Corey Wise settles under a pop fly ball as teammate Benjamin Jackson backs up the play during a WPIAL Class A first-round playoff game against Eden Christian at Boyce-Mayview Field on May 15, 2019. The Pioneers, including senior Jackson and sophomore Wise, were seeking their third consecutive playoff berth this spring until their season was wiped out by the coronavirus pandemic. (Photo by Darnell Graham) 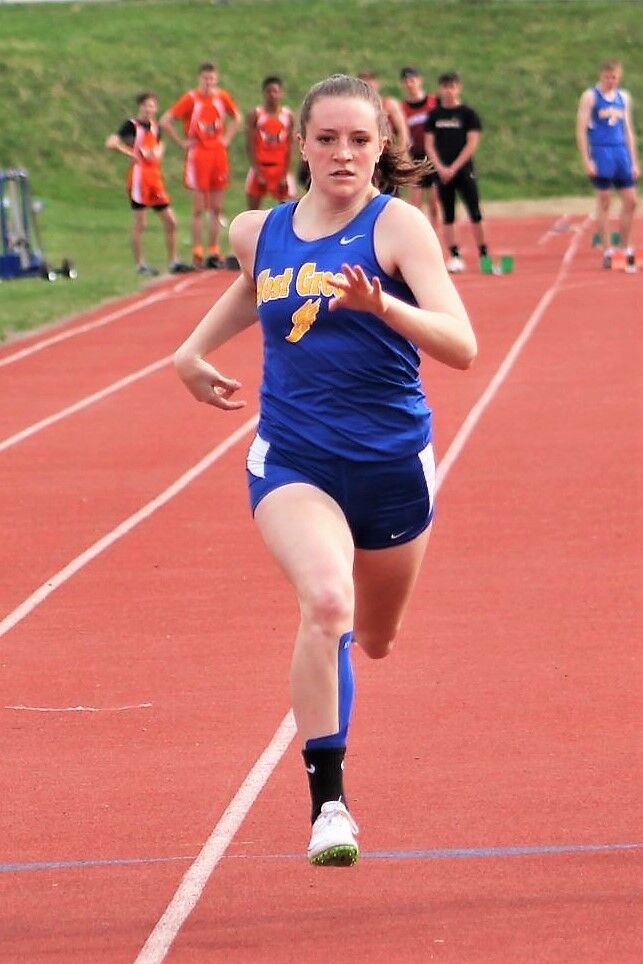 West Greene freshman Brooke Barner competes in the 100 during a section meet at Waynesburg Central last year. Barner, who medaled in the 400 at the WPIAL championships and qualified for the PIAA meet in 2019, had her sophomore season taken away by the coronavirus pandemic. (Photo by Jim Downey)

West Greene’s Jade Renner pitches against Jefferson-Morgan during a WPIAL Class A semifinal game at Trinity Middle School last year. Renner was in the circle for three WPIAL championships and two PIAA titles for the Lady Pioneers, but the Edinboro recruit had her senior high school season cancelled due to the coronavirus pandemic. (Photo by Celeste Van Kirk)

West Greene’s Corey Wise settles under a pop fly ball as teammate Benjamin Jackson backs up the play during a WPIAL Class A first-round playoff game against Eden Christian at Boyce-Mayview Field on May 15, 2019. The Pioneers, including senior Jackson and sophomore Wise, were seeking their third consecutive playoff berth this spring until their season was wiped out by the coronavirus pandemic. (Photo by Darnell Graham)

West Greene freshman Brooke Barner competes in the 100 during a section meet at Waynesburg Central last year. Barner, who medaled in the 400 at the WPIAL championships and qualified for the PIAA meet in 2019, had her sophomore season taken away by the coronavirus pandemic. (Photo by Jim Downey)

West Greene’s softball team was ready to take a page from its girls basketball team’s book this spring.

Both programs lost a trio of outstanding players — Kaitlyn Rizor, McKenna Lampe and Madison Lampe — to graduation. The girls basketball team responded by putting together an undefeated regular season and reaching the WPIAL final for the third year in a row. The softball team was looking for similar success.

“Several publications had us as the team to beat again and we thought that if everything went well that we’d be right there when it was all said and done with again, given the opportunity,” said West Greene athletic director and softball coach Bill Simms.

The Lady Pioneers were not given that opportunity this spring, though. The coronavirus pandemic made sure of that, forcing the cancellation of the season.

“I don’t think anybody thought that we would lose the entire season,” Simms said. “Actually, we were getting geared up to take our Myrtle Beach trip that we take at the beginning of the season every year. But, whenever the NCAA canceled March Madness and suspended the wrestling championships and then made the early announcement that baseball and softball championships wouldn’t be contested, and then the pro sports started to follow, we started to think there’s not much hope that we’re going to play.”

The Pioneers’ baseball program was on a roll as well, with two straight postseason berths and most of its starting lineup and pitching staff returning. West Greene’s track & field team had 22 athletes on its roster, including Brooke Barner, who qualified for the PIAA championships as a freshman last year.

Like the softball team, both of those programs will have to regroup and look ahead to 2021.

Losing the softball season was a family matter for Simms as his daughters, senior Kylie Simms and freshman Emily Simms, were both on the roster.

“Kylie was devastated, as was Jade and all the seniors,” Simms said. “The coaches and the boosters probably took it even harder. The girls missed their last season and their senior day, and to see some of those moms’ break down, it was just touching.”

Renner didn’t have a chance to improve on her career record of 57-10, including an amazing 19-1 in the postseason, or add to her three first-team all-state honors. A key member of three of the Lady Pioneers’ district crowns and both of its state titles, she set a school record with 315 strikeouts and allowed only 33 walks and 317 hits in 373 1/3 innings pitched. Her career ERA was 1.93 and batters hit just .220 against her.

“I felt Jade got a little bit undersold on her hitting ability,” Simms pointed out about the Edinboro recruit. “Everyone wants to focus on her pitching where her numbers are through the ceiling, but she was not only a great hitter but a tremendous clutch hitter for us, too.”

Simms was anxious to see what hit 2020 crew could do.

“We knew we were going to rely heavily on Jade in the circle and we had some other seniors that were going to be big contributors like Bri Amos and my daughter (Kylie), and we had a transfer that came out from Waynesburg named Paige Taylor, who was going to give us another stick in the lineup and probably start on the infield at the shortstop or second base area.

“And we were excited about some other kids we’ve got, like Jersey Wise possibly stepping into that center fielder role and two sophomores set to start on the corner outfields, Olivia Kiger and Anna Durbin. We had a freshman, London Whipkey, who we were expecting big things from. She was going to be a heavy hitter for us. And, I’m sure that Kylie Meek was going to pitch more this year and definitely take over the first baseman’s role. Next year she’ll be the solid No. 1 pitcher.

“We just felt we were pretty solid.”

“We gave them their senior banner and their senior award during our modified graduation, but it still seems like they got cheated a little bit,” said Simms, who still has a talented crew for 2021.

“We’re going to rely heavily on Kylie Meek taking over in the circle. We got to play a couple rec league games with her and she’s looked really good. We’re going to have Katie Lampe take over second base or shortstop. She’s hoping to continue that Lampe tradition that we have. She’s a tremendous player in herself.

“We have BreAnn Jackson looking good at first base and the Karvan sisters, Taylor and Jordan, who are going to fit in on the infield also. Emily (Simms) is coming off a knee injury but she’s going to factor into the mix somewhere as probably a DP or on the infield at times. London has potential to become the starting catcher, great arm and hits a ton.

“We’re pretty excited with where we’re at for next year. We just wish we would’ve got this season in as well.”

Lenny Lohr was entering his first year as head coach of the Pioneers’ baseball team after serving several years as an assistant under his nephew Shawn Lohr, who guided the team to the playoffs in 2018 and 2019.

“We had 22 players and seven of them were returning starters,” Lenny Lohr said. “We had our top pitchers back, too. We lost only two seniors. We were set up pretty nice. I definitely think we could’ve made the playoffs and maybe made some noise there.”

Lohr recalled when the pandemic hit.

“We had a scrimmage on a Thursday at Chartiers-Houston, which went well,” he said. “Friday, we went to the school gym and were setting up the gym for practice when our athletic director Bill Simms came in and sent all the kids home. That was the start of it ... and the end of it.”

The Pioneers had three seniors — Benjamin Jackson, Gavin Scott and Jud Meek — among their returning starters.

“This would’ve been Ben’s second year,” Lohr said. “He did track before that. It wasn’t very long before you could tell that kid’s special. He was a team leader. The players really looked up to him. He was our left fielder.

“Jud was a four-year letterman who broke into the starting lineup during his junior year. He was our first baseman, but we could use him at different spots in the infield. We knew we could count on him.

“Gavin played as a freshman and sophomore, didn’t play as a junior but came back this year and was really shining in our preseason. I knew he was going to jump right back into the starting lineup.”

Lohr will have ace pitcher Caleb Rice back for 2021. Shortstop Corey Wise and third baseman Dalton Lucey are also strong pitchers who will return.

“Our center fielder, Hunter Hamilton, was coming off a real good year and he’ll be back,” Lohr said. “Also Chase Blake, our second baseman, and utility infielder Brayden Mooney. We’ve still got a lot of good players.”

Lohr is assisted by Chris Haines, who coached Waynesburg Central to a WPIAL title in 1999.

Third-year boys and girls track & field coach Angela Barner tried to stay upbeat when the first two-week postponement of the season was invoked.

“We were trying to stay as positive as we could, just to keep the kids’ spirits up,” Barner said. “Sitting around waiting was the worst. I was sending weekly emails to all my athletes and trying to give them workouts to do at home.

“Then, when we got the final notice it was the sad email to tell them their season was over. I sent personal emails to all the seniors, telling them what an honor it was to coach them.”

“Colton and Amber were both four-year letterman,” Barner said. “Colton ran the 200 and 400. Amber Finch threw the javelin and shot put. D.J. and Daniel were both first-year throwers. Cameron was going to run the 100 and 200, and possibly the 400. Andrew ran the 100 and 200, although he was coming off a knee injury in football so we weren’t sure what he was going to be able to do this season.

“Brendan was a thrower, shot put, javelin and discus, and his numbers had really improved the first two weeks of practice on his discus throwing. He had a lot of potential.”

West Greene’s best returning athlete was sophomore Brooke Barner, the coach’s daughter, who made the WPIAL championships in the 200 (ninth) and 400 (sixth-place medal), qualifying for the PIAA final in the latter.

“Brooke was coming off a great freshman season,” coach Barner said. “We were hoping she’d get back to the states this year again. She also does the 100.

“Brooke’s been very positive about the situation. She’s been to Penn State, where she works with a personal trainer at Victory Sports Performance. She’s getting ready for next season.”

Coach Barner felt good about her 2020 squad in the preseason.

“I was looking forward to see what they could do. But they had that opportunity taken away from them.”