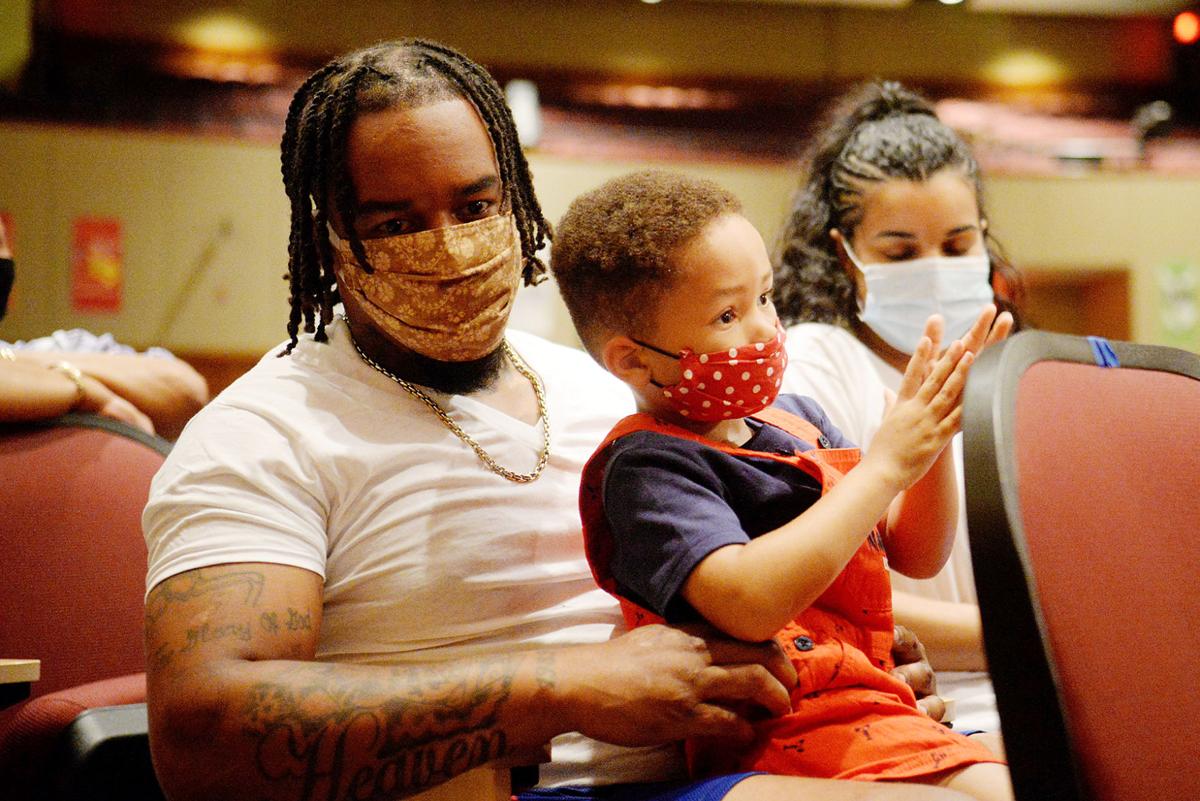 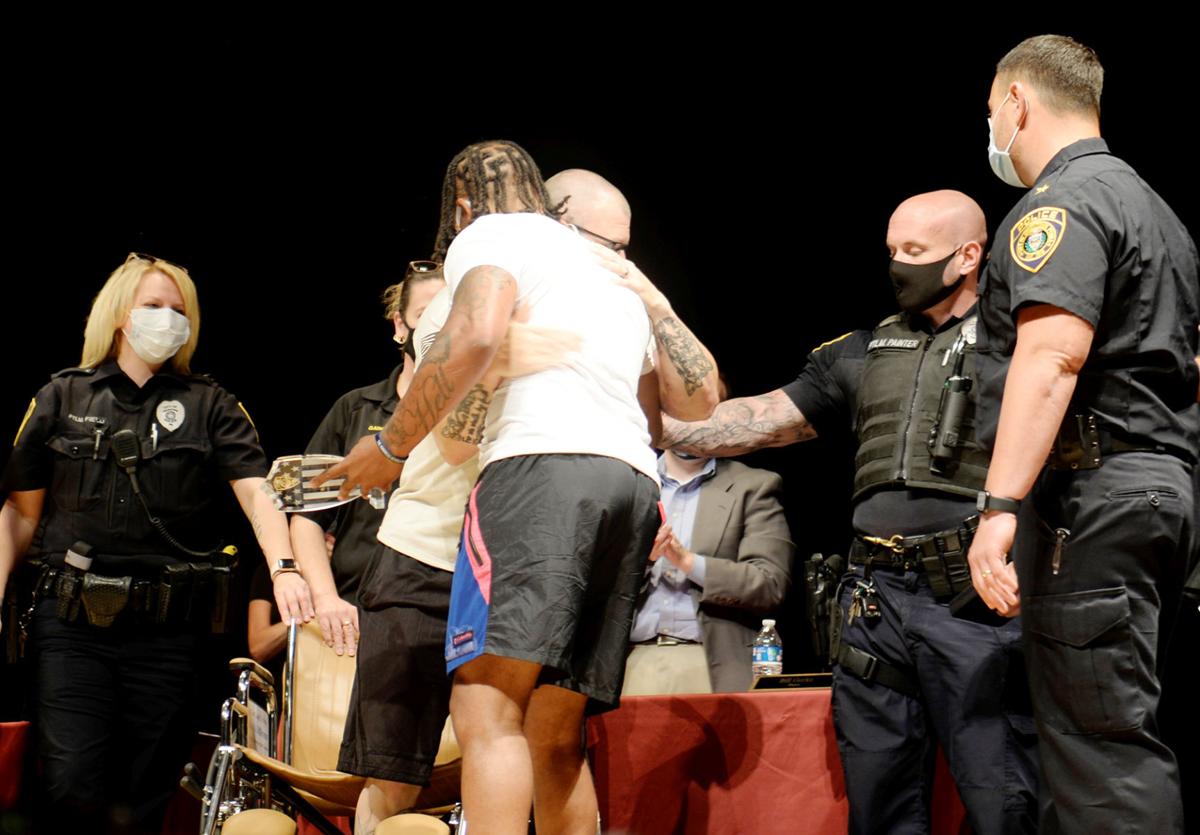 Uniontown City Police Officer Jay Hanley rises from a wheelchair to hug Daylan McLee, who pulled him from a burning police car June 21 after he was severely injured in a crash. McLee was given a lifesaving award Thursday. At left is Officer Jennifer Field. At right is Uniontown K-9 Officer Matt Painter and Chief Jason Cox. 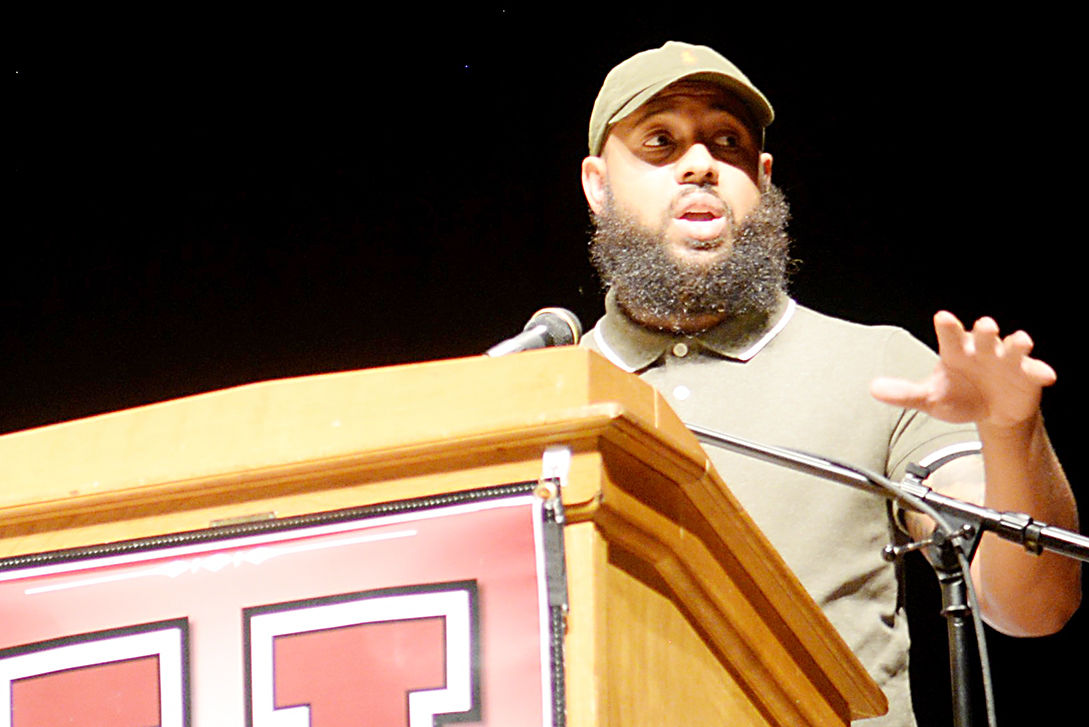 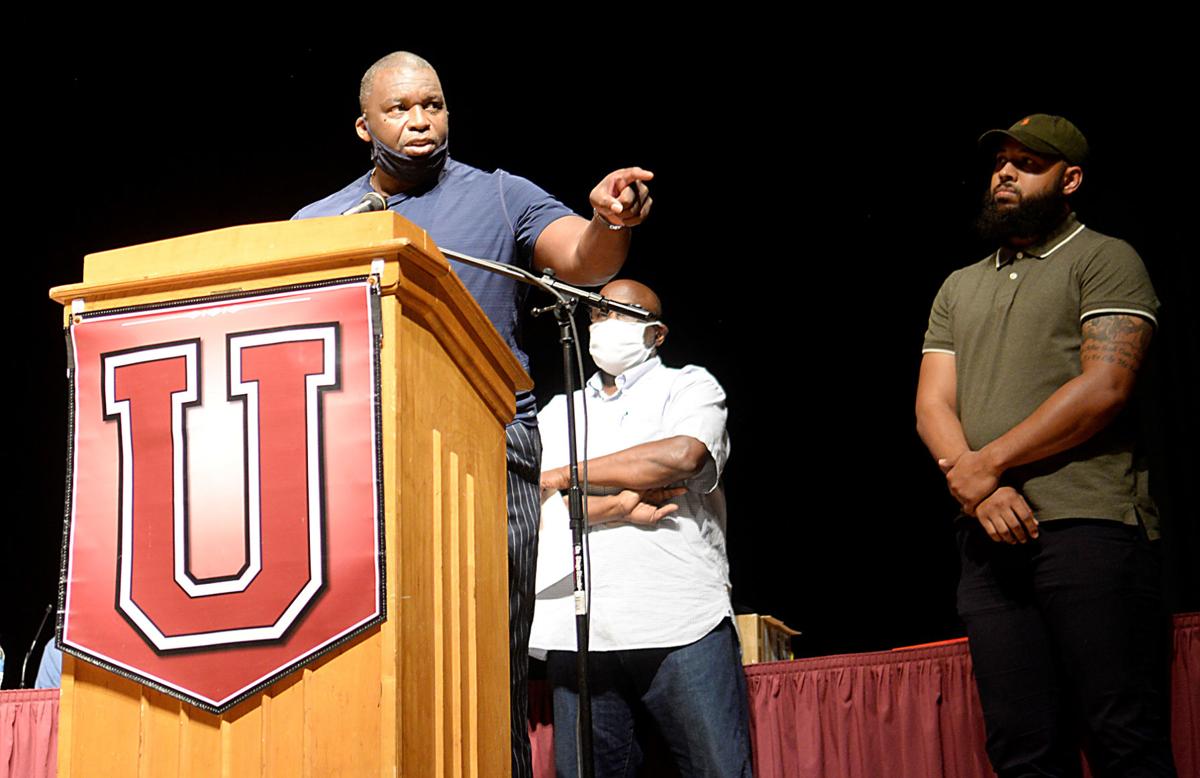 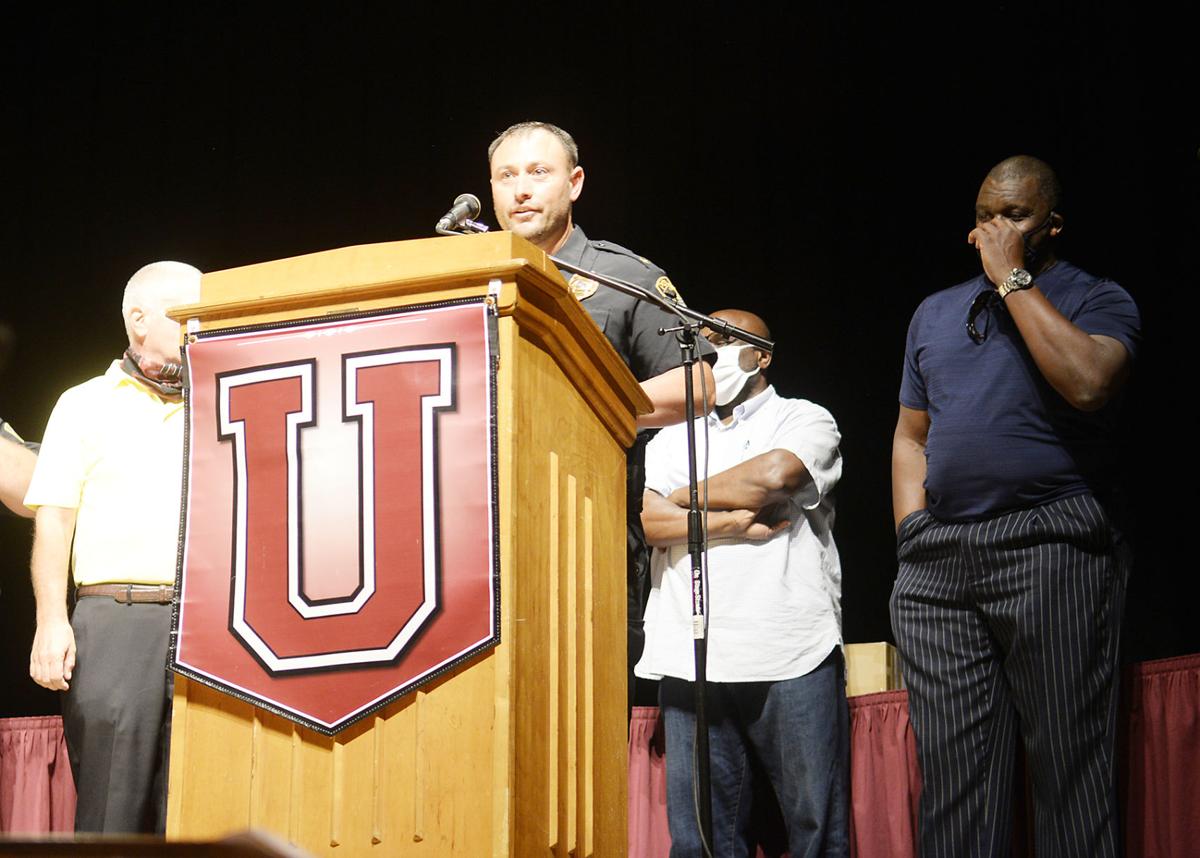 Uniontown City Police Officer Jay Hanley rises from a wheelchair to hug Daylan McLee, who pulled him from a burning police car June 21 after he was severely injured in a crash. McLee was given a lifesaving award Thursday. At left is Officer Jennifer Field. At right is Uniontown K-9 Officer Matt Painter and Chief Jason Cox.

Instinct overtook panic for Daylan McLee when a Uniontown City Police officer crashed outside his home on Father’s Day.

Officer Jay Hanley was responding to a call to assist his fellow officers on Father’s Day, June 21, when he crashed near Fayette Street and Pennsylvania Avenue at about 5:45 p.m., shattering his leg. McLee ran outside, thinking the person in the mangled car must be dead. He saw Hanley was conscious and tried the door, along with Capt. David Rutter, but Hanley was trapped inside. McLee heard people shouting, “It’s on fire! It’s gonna blow!” he recalled.

“I believe God took over then. Next thing I know, I was ripping the door open and pulled him out, and took him farther across the street,” he said.

Hanley underwent surgery on his leg, and is recovering. Officers said he is in good spirits.

McLee, a father of three, was recognized with a police lifesaving award at a Uniontown City Council Meeting Thursday, along with Rutter and K-9 Officer Matt Painter, who assisted in the rescue. Mayor Bill Gerke, Chief Jason Cox and local preachers commended McLee at the meeting, and the board voted to declare June 21 as “Daylan McLee Day.”

“Without thinking about it, you pushed to the side every negative interaction and wrongdoing that you’ve had at the hand of some police, and you jumped into action,” said Kevin Sanders. “You didn’t see a police officer, nor did you see a white man, but you saw a life in danger, and you were willing to put your own life at risk in order to save another. You, Daylan, chose love that day.”

McLee was shot at by a state trooper and arrested in 2016, spending a year in jail before his charges were dropped. Troopers were called to a disturbance at the Dunbar Township American Legion that day. An ongoing lawsuit filed by McLee said he was not involved in the altercation and disarmed a gunman before police arrived at the scene, while troopers said at the time they arrived to see McLee with the gun.

“To be shot at is dramatic, and then being there in jail when you know you’re innocent is a little depressing,” McLee said.

He said that interaction was not on his mind when the officer crashed.

“Good is good. Bad is bad. You can’t cast judgment on everyone. You can’t watch someone burn. You’ve got to leave those shots up to God,” he said.

While he said he was not judging Hanley by his interaction with another officer, he hopes that his experience will teach others not to paint Black men with broad strokes.

Although the 2016 charges were cleared from his record, he said his history still has an impact when he is looking for work to provide for his family. He hopes that his reputation will be changed.

“Hopefully, now, my character says who I am, and things will get better,” he said.

The Rev. Al Thompson of St. Paul’s AME compared McLee to the Good Samaritan in the Bible, saying he was “the person who was the least to be believed to help.”

The Rev. Eric Johnson spent 27 years in law enforcement as a corrections officer, and said McLee acted as a first responder that day.

“There’s this exclusive group of people who runs to trouble when everybody else runs from it,” he said.

Johnson said he faced racial discrimination through his life and career, but succeeded because he was given a chance. He said everyone in the country should take note of Daylan’s actions and replicate his display of selflessness.

“In the midst of COVID-19, in the midst of racial unrest that we have in our nation, you decided to do the God thing instead of the ‘me’ thing, and I think that’s what all of us need to learn to do in America. If we don’t learn how to do what Daylan did, then we’re going to implode,” he said.

The Rev. Jason Lamer of Faith Assembly of God said he, too, hopes the world will learn from McLee to bridge divides.

“We saw you, the nation saw you, and now may this turnaround be a moment for our world to see what is possible when we come together to listen to one another, to learn from one another and to love one another.”

Sanders proposed June 21 be recognized as Daylan McLee day, so that the community can remember his actions and unite.

“I believe that this event has given us a brief and fleeing moment in time in which we can honor Daylan’s heroic actions and go back to our isolation, or we can honor Daylan’s heroic actions and use this event as a springboard to unite our community simultaneously,” he said. “Given the racial tension in America today, I would hope that we, as a community, would choose the latter.”

You are awesome and deserve this! Congratulations!